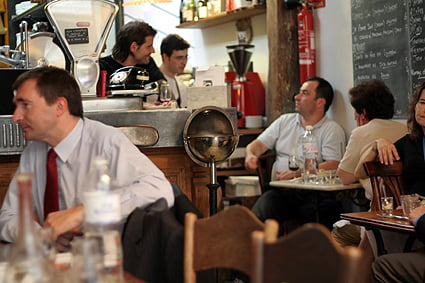 No complaints about the food at Racines. In fact, it’s one of the best places I’ve eaten in Paris in a long time. 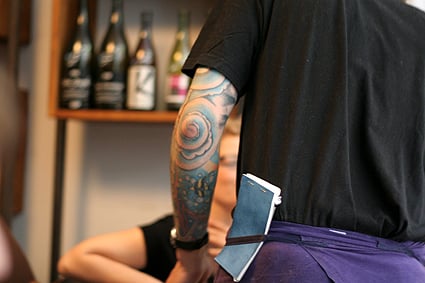 Unfortunately I took some of the worst pictures of one of the best-looking—and probably the most heavily-inked—restaurateurs in Paris, so you’ll have to go meet Pierre Jancou for yourself.

He was waiting on the tables that day and was happy to chat in French, English, and Italian, as necessary. 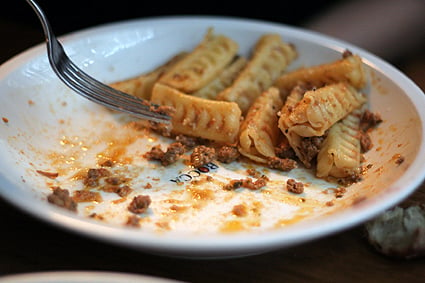 The pasta showed off how Italians (particularly in Bologna) are able to coax lots of flavor from the thinnest, almost non-existent ragù. While it didn’t look like much, it was sensational. And although I’ve written about the lack of excitement over organic products in Paris, at Racines I was happy to eat my words. 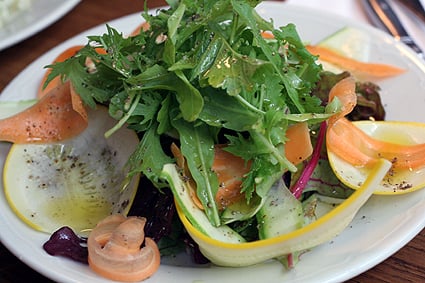 The menu changes daily and on our visit, there was a salad of thinly-shaved vegetables from Alain Passard’s garden and very light rabbit rillettes to spread on slices of fresh baguette. 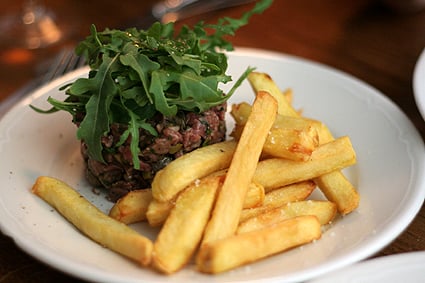 We ordered each of the main courses: steak tartar with real, honest-to-goodness, made from scratch frites, braised pork cheeks with tiny, excellent roasted potatoes, and Festonati pasta.

With Meg and Dorie, our quick lunch ended up lasting almost 3 hours—or more. The wines are fascinating to sample and “more than organic.”

UPDATE: Sadly, as of October 22, 2009, Racines has been sold and is no longer owned by Pierre Jancou. The future of the restaurant is unclear but I wish him luck in future endeavors.