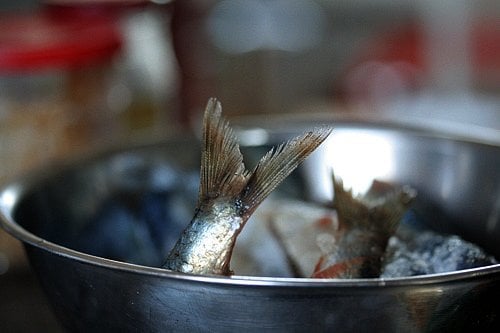 If we Americans are good at anything, it’s shopping. It’s in our genes and we were simply born to shop. And we’re also good at getting deals. I don’t think many people pay full-price for anything anymore, and unless something is discounted, we won’t buy it.

When I moved to France, folks were amazed at my ability to search out le deal. I felt silly going into the local papeterie and buying 8 sheets of paper for €4, when I could get a whole ream at Office Depot for about the same price. Except no one told the French Office Depot team that Office Depot is supposed to be a discount store, and after I took Romain to one in New York, where everything was essentially free, he was shocked, and said, “Office Depot in Paris is the last place you go if you need something.” 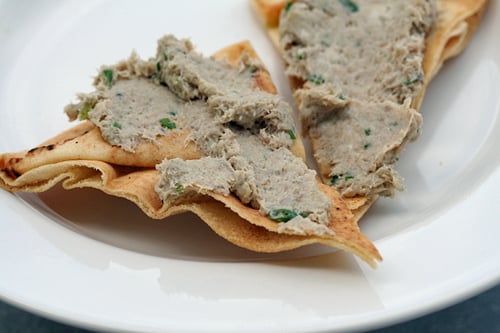 Nevertheless, I keep hearing about ‘recession-friendly’ prices and ‘budget-friendly’ budgets, and whatever. I’m a bit skeptical of the whole thing since someone in the states was telling me that they bought their new, jumbo flat-screen television online to save the tax, because they were trying to save some money. Um, and why are they buying a new jumbo flat-screen television then?

I guess I shouldn’t talk, though, because I’m a shopper, too.

If you saw my living room—which doubles as my kitchen, dining room, office, guest room, laundry room, and closet, there are piles of cookbooks everywhere. It’s a sickness, but I can’t help myself.

My Trippen shoe collection is legendary. And clothes? When I moved from the states, I realized I had 54 tank tops, 16 pairs of jeans, 209 socks, and a custom-made pair of leather jeans that someone I know who worked at a store specializing in bondage gear back in San Francisco made and fitted especially for me. Those I haven’t ever worn—but I will someday. (Although I might have waited too long, as there’s been a few too-many croissants between then and now.) But I did have to bring Romain into that only-in-San-Francisco place on a trip back, just for him to see it. And just for fun, they dressed him up in a head-to-toe latex outfit. Now that, my friends, was perhaps the funniest day of my life. But because I keep getting told that I should only talk about food, I’ll spare you the details. 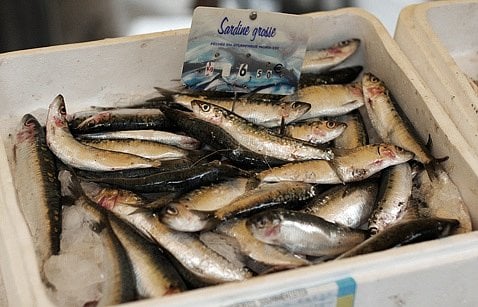 One place where I don’t really economize is with food. Sure, I’ll look for a better prices on cherries at the market. But fruits and vegetables are usually cheapest when they’re plentiful and in season, so that seems natural. But if I’m going to buy beef, which is a rarity, I’ll go to a good butcher and spend the bucks. When I buy fish, I try to stick to those that are plentiful and sustainable. Which, happily, are the least-expensive fish on display. Although one should be wary of ‘cheap’ fish, like the ones that are on sale or those going around & around & around & around at the all-you-wanna-eat-help-yourself conveyor-belted sushi bars. 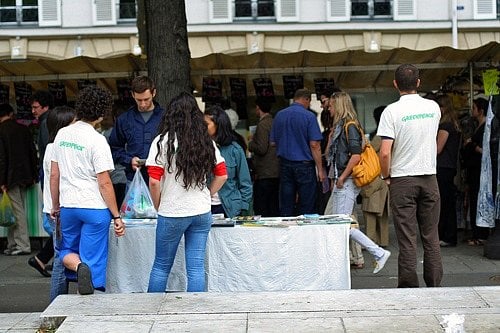 Because I’ve become Monsieur Responsable when it comes to buying and consuming fish, I’ve been trying to be more selective when choosing which critters to eat, in spite of the huge variety available here.

(I had dinner at Racines with Barbra the other night and I could tell we both wanted to order the cod with pommes écrasés, or “broken potatoes”, but we didn’t want to do it in front of the other. But the chicken I had was amazing. And I don’t know if she would’ve even noticed what I ordered anyways, with Pierre breezing around his restaurant all night in a snug white t-shirt. I was concerned the poor girl was going to wake up with whiplash the next day. I, on the other hand, was there for the food. I assure you.) 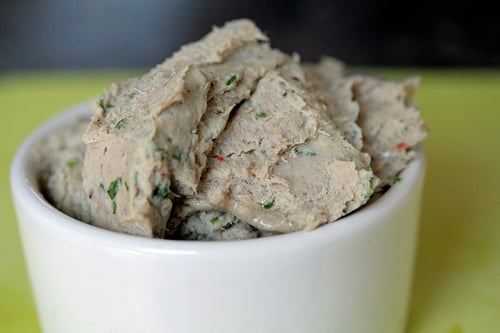 So I buy sardines, which are inexpensive and as tasty as Pierre, but without the tattoos. And best of all, they’re very good for you. I’ve seen Dorie Greenspan’s recipe for Sardine Pâté using tinned sardines, but I thought it would be cheaper to use the fresh ones. (Who’d of thought ‘fresh’ would be cheaper? Let’s hear it for France!) But wherever you live just ask your friendly fish merchant to prepare the sardines, and to clean off any scales.

And for all you “do-ahead” types, who make us “last-minute” types feels like bad planners, yes, this can be made ahead. In fact, it’s better if made the day before. And if you’re one of those “freezer-types”, well gosh darn it, yes, it can be frozen.

The whole she-bang shouldn’t cost you more than 2 bucks to put together, which makes it quite the bargain. And with all the money you save, you probably won’t be able to buy that flat-screen tv nor a form-fitting latex bodysuit, but you will be able to eat pretty well. And you can’t put a value on that.

(Although I may have to put one on those leather pants since at the rate I’m wearing them, they probably going to be on Craigslist.fr any day now.)

I serve this with pita bread cut into triangles, brushed with olive oil, and toasted. But toasted rounds of baguette, or any cracker or flatbread would be perfect. One with rye or whole grain flour is especially recommended. You can omit the chives and add some parsley or chervil. Scallions are rare in France, but finely-chopped, I think they’d be terrific in place of the shallots. Although this is a great spread along with an apéritif, I like it for lunch, with a salad.

Storage: Pâté can be kept in the refrigerator for up to three days, or frozen for up to one month. Notes: In Paris, it’s fairly easy to find sardines cleaned and ready-to-go at the fishmonger. If you can’t, it’s not that difficult to do yourself. Here’s a pictorial on how-to fillet sardines. It’s good idea to try to get any tough bones out of the sardines before mashing them in step #4. If any too-crunchy ones remain after you’ve made the pâté, spread the pâté on a cutting board and run over it a bunch of times with a chef’s knife to ensure they’re all in very, very small pieces. As the pâté rests, they’ll become imperceptible and in fact, are quite good for you as they have a lot of bone-building calcium.