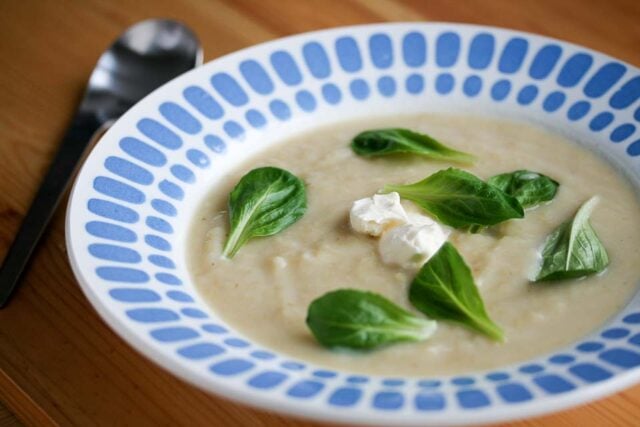 I don’t think I’ve ever made a New Year’s resolution. Even if I did, I likely didn’t have much success sticking with any of them, so I just don’t bother with them anymore. Usually resolutions involve quickly-forgotten rules about eating better, losing weight, and saving money. (Which is probably why I never make them in the first place.) So I wouldn’t place any bets that I’m going to stick with doing any of those three things this year, I’m happy to report that for those of you with more will-power than I, this Potato Leek Soup falls neatly into all three categories. 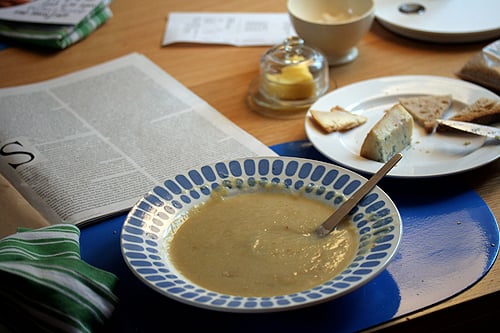 I kind of have a funny relationship to soup. If I’m going to eat soup, I eat it as a main course for lunch or dinner, not before. And since for me, soup is a meal, I like thick soups. I’m not a fan of slurping up thin broth from a vessel. If I wanted to lap up watery liquid from a receptacle, I’d slip a collar around my neck and get down on all-fours for my supper. No thank you. (Well, at least not at dinnertime.) 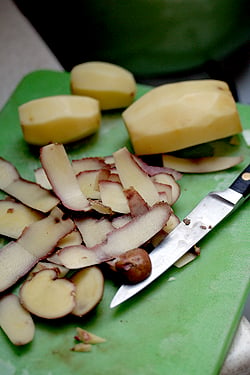 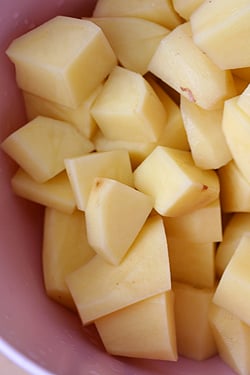 So where do I start with this one? Well, for those who want to save money, I’ve venture to say you could make a giant pot of this soup for in the vicinity of two bucks. And since leeks and/or potatoes invariably show up in my CSA box, making soup has become part of my weekly winter repertoire. For those of you looking to save time, I’d say it takes me less than 30 minutes to prepare all the ingredients for this soup. And an added bonus is that if you took a peek in my freezer, I usually have a freezer bag or two of it since I always appreciate having one on hand when I need a winter warm-up. Especially since collars don’t provide much insulation against the elements. 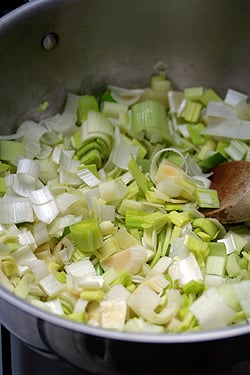 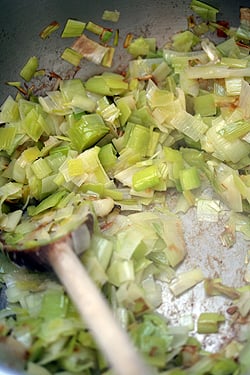 If you think potatoes are those dusty things at the supermarket that you lug home by the sack, that’s true. But there’s a whole world of delicious potatoes at your local market and since moving to France, where each potato is revered for its specific flavor and qualities, I now ask for permission, er…advice, from my potato master at the market, who always lords over at least ten varieties of studs spuds.

For this soup, I used what they call Monalisa potatoes. They cook up nicely because of their softer flesh. You don’t need to use fancy fingerling-style potatoes, but since the soup is so inexpensive to begin with, you have my permission to buy good, regular-sized potatoes. Hey, they’re one of the few affordable luxuries left. 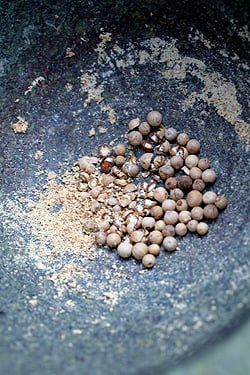 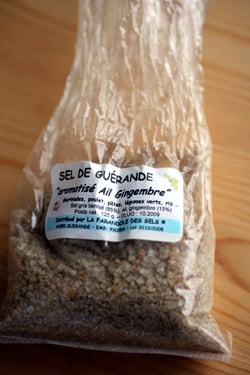 Aside from a resolution I should adopt about talking too much about my personal life, for the other two resolutions—losing weight and eating better, this soup uses just a soupçon of butter or oil, and all those potatoes are a good source of vitamins A and C. It can also be made dairy-free and vegan, and is gluten- and cruelty-free. 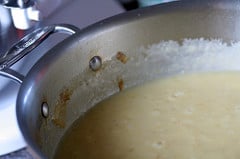 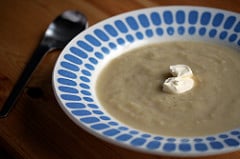 But if you’re anything like me, you’re not really going to spending much time on resolutions. I like salt, especially fleur de sel de Guérande, and sprinkle on the soup grains of garlic-ginger salt that a salt harvester gave to me. And I’m not adverse to adding some cubes of smoky bacon to the soup, or topping it off with a blob of crème fraîche and a few winter greens. I know, I know—resolutions are resolutions, and rules are rules. But since I live in France, no one pays that much attention to resolutions or rules. Unless you’re the kind of person that likes to be punished. Whatever floats your boat. Or in your soup.

I’m normally not keen on white pepper. But I use penja white pepper, which is nice and spicy, not musty like other white pepper and works really well with soups made with tubers and root vegetables. It’s also somewhat expensive and if you don’t have it, the red pepper provides a hint of after-heat. Black pepper can be used, but is better ground over the top of each bowl. Some might inquire whether they could use chicken or vegetable stock, which you certainly could. But I’m fine with just using water. If you’ve not used leeks before, check out my post, how to prepare leeks.
Servings 6 Servings

What potatoes to use for what? (UK)

Gougères: French cheese puffs (Would be nice alongside this soup!)