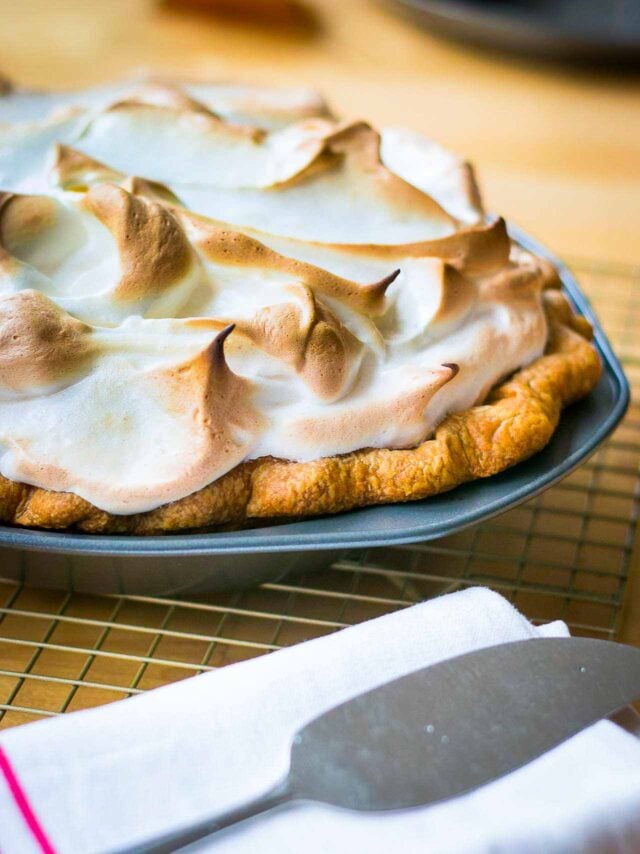 When I was growing up, I would not eat pumpkin pie. My mother never made it but they served it at our school cafeteria in New England and the orange filling looked a little jelled. It certainly wasn’t as appealing at the Boston Cream Pie on plates just next to the slices of the pie, with the glossy chocolate icing and the cool vanilla pastry cream piled up in the center. It was a no-brainer. 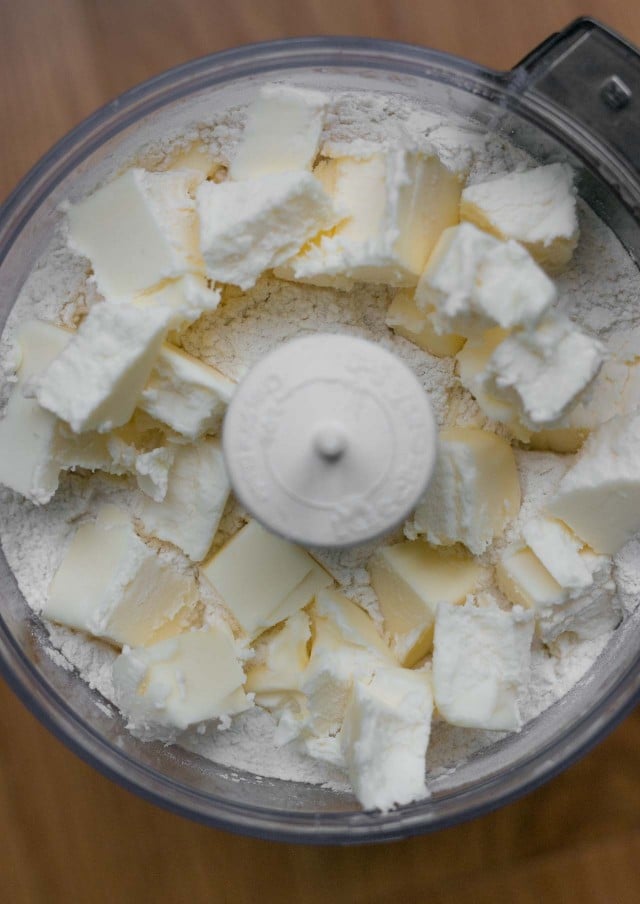 Interestingly, I don’t think I’ve ever made Boston Cream Pie, perhaps because it’s something that’s so mythic to me, and I hold it on such a high pedestal, that I’m not sure I could make one that meets my own unreasonable standards. But another, and perhaps a more important reason, is that if I made it, I would eat the whole thing in one sitting. 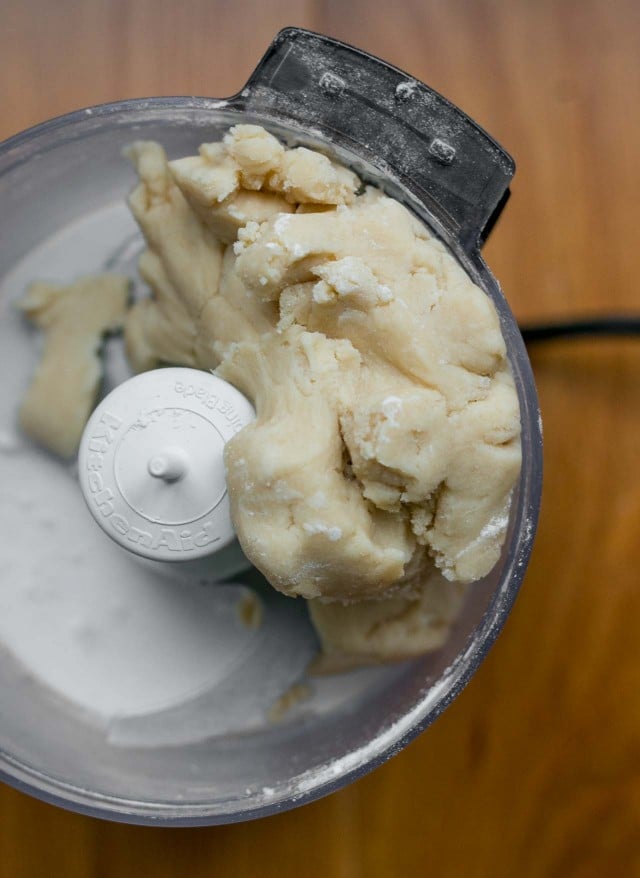 Another thing I wouldn’t eat when I was growing up was lobster for an unspecified reason. (Which I am still kicking myself about to this day.) It’s such a shame because even though there is a drop in prices in the U.S., they were very, very inexpensive back in those days.

In France, prices are steep: A live lobster can set you back up to €70 per kilo, which is roughly $30 per pound. I can’t imagine how a family of four – or even two people (no matter how much in love they were and wanted them for a romantic evening) – could swing paying $45 per lobster, per person. 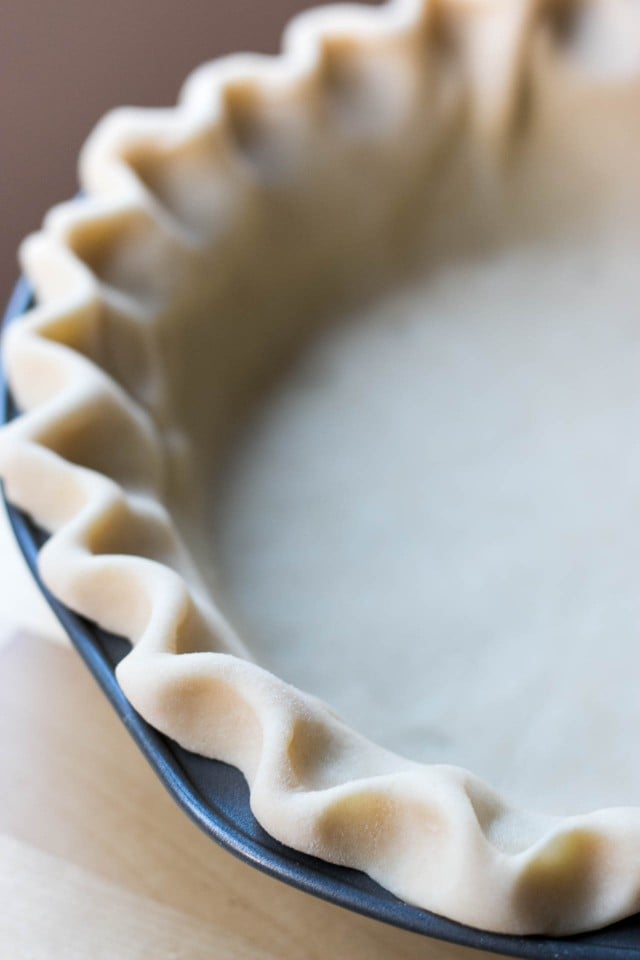 But Europeans can’t imagine putting marshmallows on sweet potatoes or squash, as some of us do around the holidays. I can’t say that it’s a dish that I am happy to defend. I never really took to this uniquely American mélange of candy meets courge (squash), instead scraping off the toasted marshmallows and just eating those, leaving the orange paste behind. 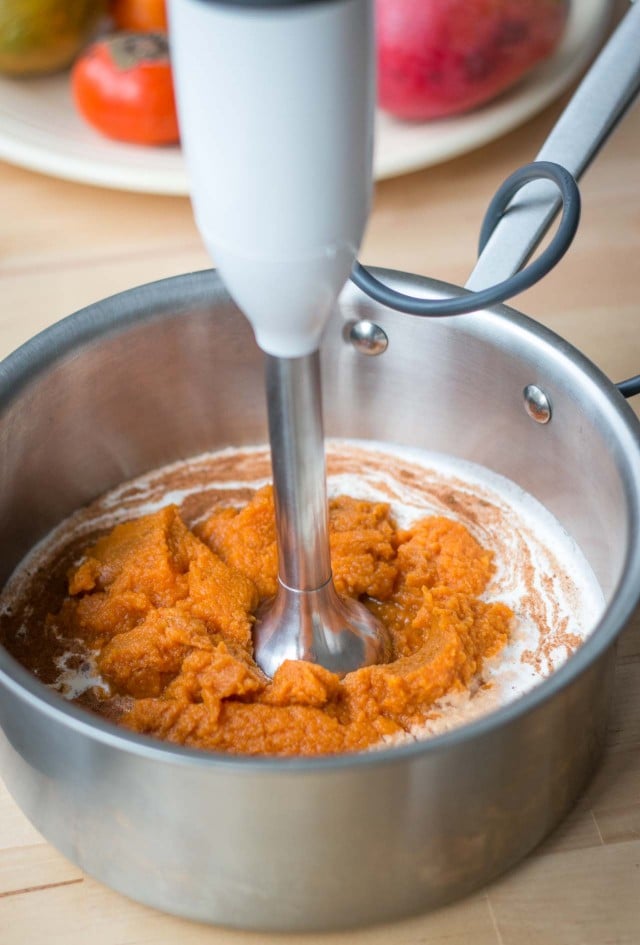 But in dessert, it works. True, there aren’t many pumpkin-based desserts in the French pastry canon, although melons do get candied in Province, and their candying syrup is the base for calissons d’Aix, almond paste candies that are a specialty of the region. Yet while mine was cooling, Romain went over to it, picked it up and took a good sniff (how do you say “nosy” in French?), inhaling deeply. 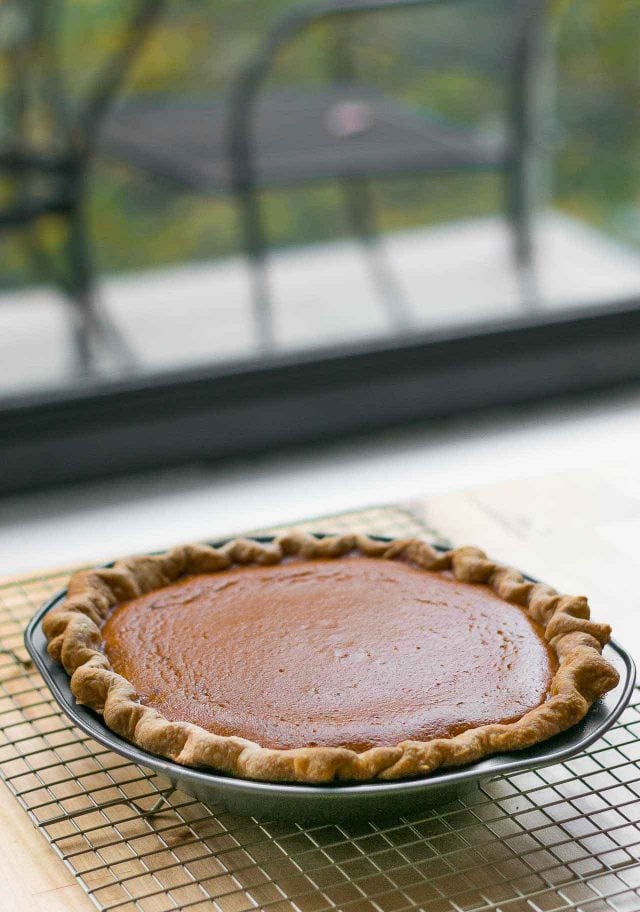 He hovered around for a while, and I was so rushed to get him a slice that I probably could have toasted the marshmallow topping a little further. My next kitchen, I think, might have to have a door. 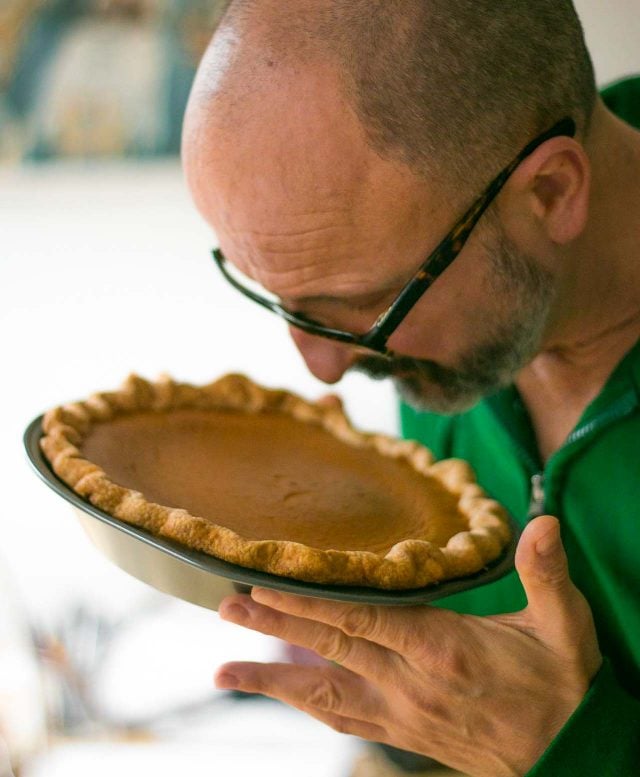 For the holidays, I often make a plain pie using butternut squash since it has less moisture and is more flavorful than many of the varieties of pumpkin that are available. But I realize there are many classicists out there, so you can use whatever puree you want as the base for this recipe, although I recommend if going with pumpkin that you find an heirloom sugar pumpkin as those are the best of the lot, in my experience.

However there’s no shame in using shortcuts. Canned pumpkin, which is actually not made with pumpkins as we know them, but squash. It’s actually fine to use and shaves a bit of work off this project. Since you’re making a homemade crust, pie filling, and marshmallow topping, cutting out some of the work isn’t the end of the world. And take it from me, any less stress you can have this time of year is worth mitigating. 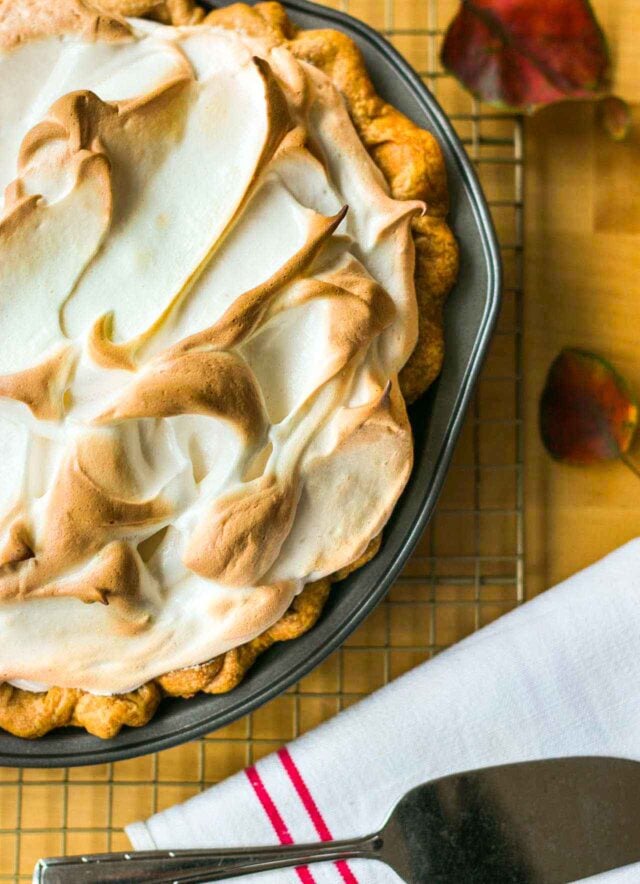 The good news about this pie is that unlike whipped cream or meringue, the marshmallow topping doesn’t weep or seep liquid onto the pie, so it can be heaped and toasted in advance. An extra bonus? It tastes great, too. 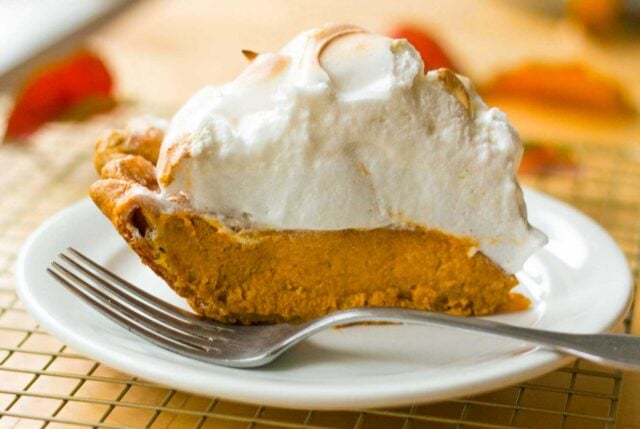 You can use canned pumpkin for this if you wish. Make sure you get 100% pure pumpkin, and not “pumpkin pie filling,” which is spiced and sweetened already. If you want to make your own sugar pumpkin or squash, puree that’s fine to use too. If you don’t want to use the Cognac or liquor in the filling, you can leave it out and increase the vanilla extract to 1 1/2 teaspoons. A nifty trick is to warm the pumpkin pie filling before adding it to the baked pie shell. It’ll take less time to bake in the oven, resulting in a smoother pie and crisper crust. Tip: If you have an immersion blender, you can mix the pumpkin pie filling in a saucepan, the same one you use to warm the filling before baking. Overcooking a pumpkin pie will cause it to crack while cooling, which isn’t the end of the world, as some people think it is. (Hey, it’s only food…) It will still taste good and the marshmallow topping will cover it up nicely, so no one is the wiser if it happens. Lastly, if you’re just looking for a great pumpkin pie, you can use this recipe without the marshmallow topping. Just add some whipped cream or serve it with a favorite ice cream, such as cinnamon ice cream or vanilla ice cream.

Notes: The corn syrup is necessary for the marshmallows for them to have the right texture. The most widely available brand doesn't have high-fructose corn syrup in it. Some may ask about using agar-agar in place of the gelatin. I’ve not used it so can’t advise, but you can read more about gelatin and substitutions (including using sheets of gelatin) at my post: How to use gelatin. There is kosher fish gelatin although I’ve not used it. The best way to slice the pie neatly is to use a thin, sharp knife dipping in a glass of warm water. After making each slice, wipe the blade clean and dip it again in warm water, shaking off most of the excess water before making the next slice. Do-ahead tips: The dough can be made up to two days in advance and refrigerated, or frozen for up to two months. It can be rolled out and placed in the pan before being frozen if you wish. Don’t defrost it before baking: just line with foil, fill with pie weights, and bake. It may take a few extra minutes to bake. The filling can be made up for two days in advance and warmed slightly before adding it to the baking pie crust. The pie can be refrigerated with the marshmallow topping on it, browned or not. Browning the pie in advance and chilling it will make the topping a little tough and harder to slice. If not browned in advance (which I recommend), you can brown it at your convenience. The pie can be served at room temperature or chilled.