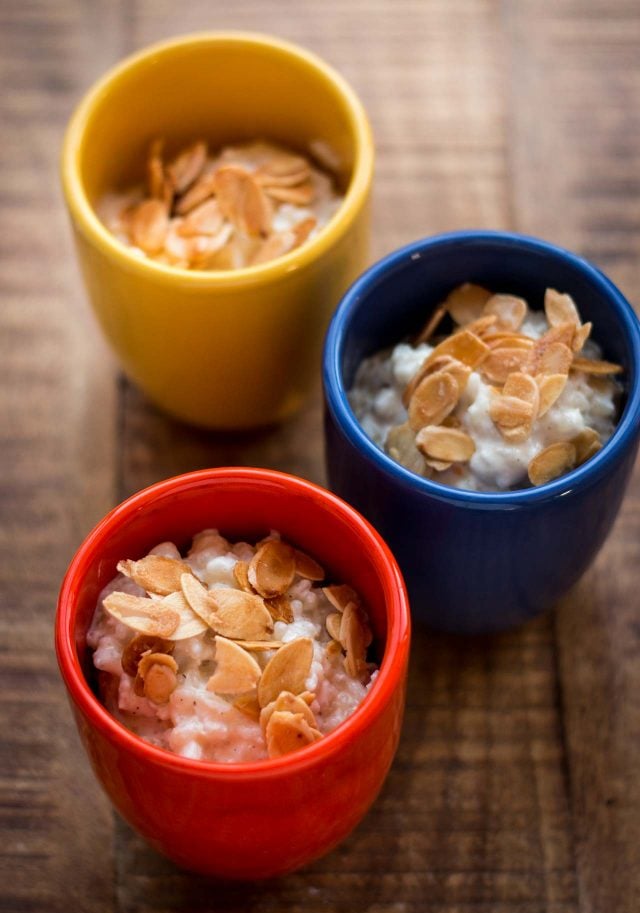 Recently I was contacted by a film production company that was proposing to include me in a series. They were interested in what I do and mentioned they wanted to come over and film me in my office, along with all the people I work with. I hated to disappoint them, but I had to tell them that it’s just was me sitting in front of my computer, or hanging around my kitchen, wielding my camera while trying to balancing a spoon on the edge of a saucepan so it doesn’t fall in, or coaxing a quickly-melting scoop of ice cream into something that’ll look presentable when I publish the recipe for you. 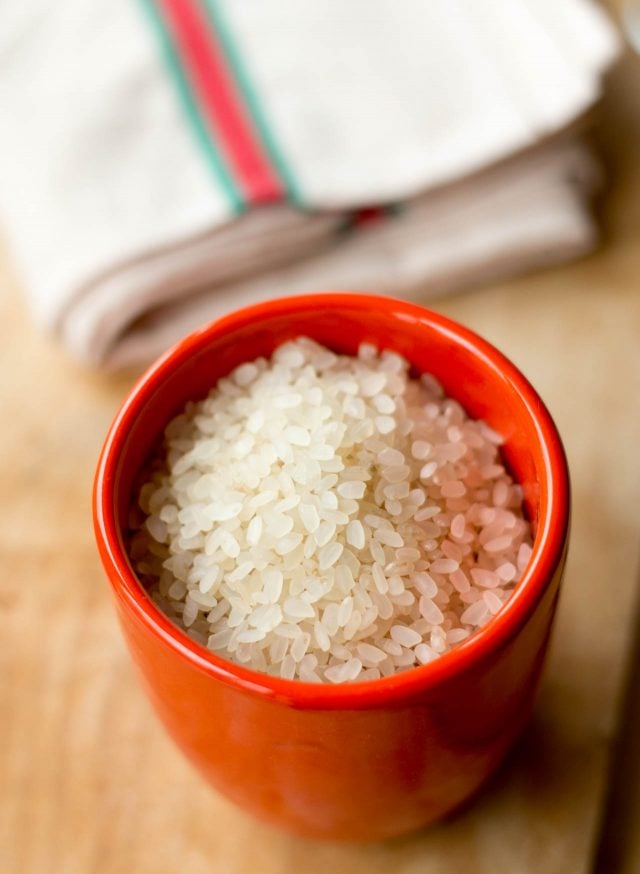 I know there are people with food blogs that do have staff, studios, and so forth…talk about aspirations!…but I’m writing this at 6:45am while Romain is eating breakfast, watching the local news while I tap away at this Riz au lait post and recipe, occasionally looking over at me, probably wondering why he chose me rather than someone who leads une vie normale, a normal life. (And also, someone who doesn’t have to ask him if vie is masculine or feminine, so I can write it correctly here.) 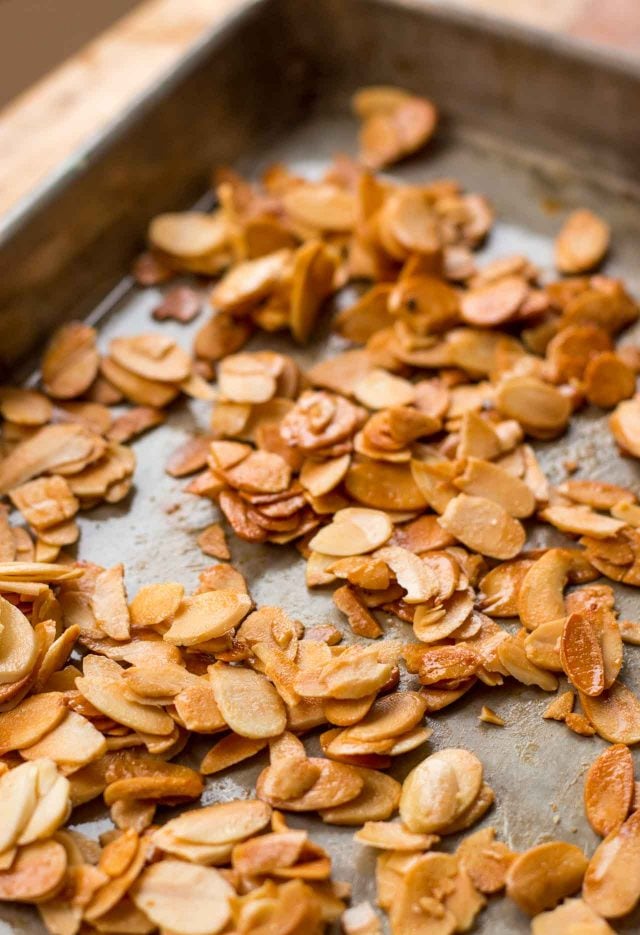 One thing that makes me more French than him, though, is that I like Riz au lait, the French version of Rice Pudding, and he’s not much of a fan. To the French, sometimes things they had in school cafeterias weren’t exactly presented in their best light, shall we say. One friend made a face when describing plates of langue de bœuf (beef tongue) he had to eat as a kid, that were swimming in murky tomato sauce. When I interrupted Romain a few minutes ago to ask him to name his least-favorite dish, he said, “Tout n’était pas bon.” (Nothing was good.) He wasn’t a fan of the rice pudding at his school canteen then, and still isn’t much of one today. 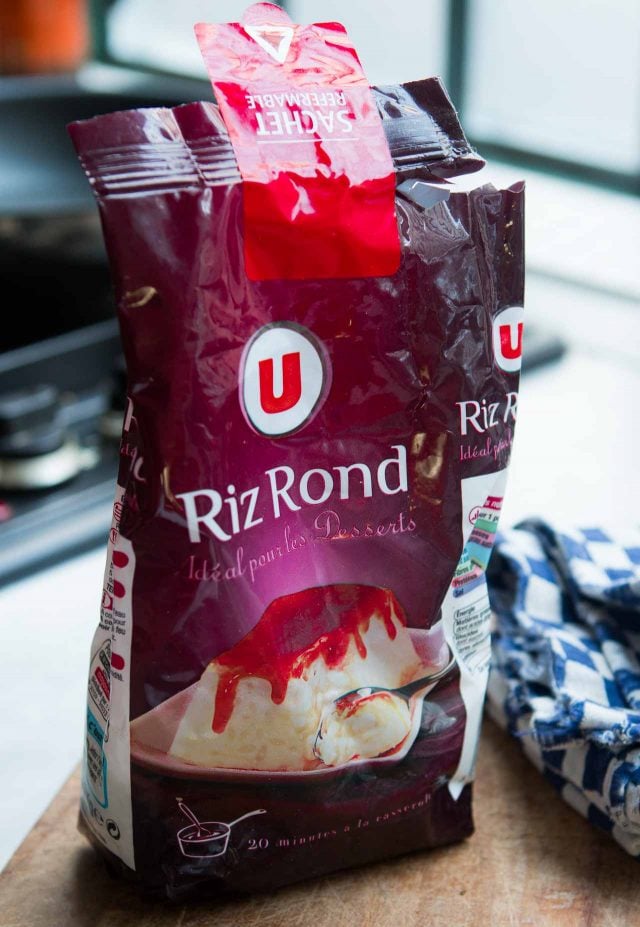 On the flip side, another French friend likes Riz au lait so much that she eats a little pot of it, that comes from the supermarché (sold in little cups like yogurt), each morning for breakfast. I tasted one once, and they’re on the sweet side but certainly have their fans as there are several brands, and containers of it in different sizes. Me? I could eat Riz au lait for breakfast, but prefer the homemade version, which I mostly serve for dessert. 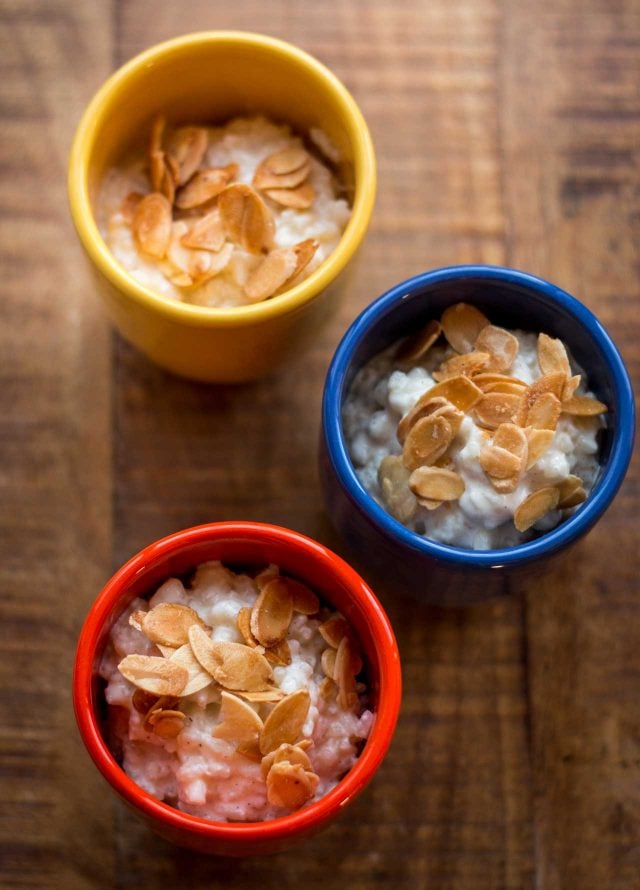 Short-grain and round rice (riz rond) are traditionally used for making rice pudding, which are starchy varieties of rice that give it that signature creamy texture. Arborio and carnaroli rice, used for risotto, fall into that category, and in the U.S., I noticed Carolina rice markets their round rice as “parboiled medium grain rice” which the label prominently says is “Perfect for making Paella, which I’ve used for rice pudding. (These two rice guides explain the different types of rice very well.) Bomba from Spain is another round rice you can use.

But you don’t need to hunt down extra-fancy rice to make rice pudding. There’s no need to complicate what’s meant to be a simple, basic, dessert. If the previous paragraph makes you hyperventilate and you can’t find round rice (in the U.S., you might want to stop in the Mexican or Spanish food aisle of the supermarket, rather than in the traditional rice aisle, to find round or short-grain rice) you’ll be happy to know that plain long- or medium-grain white rice works fine, too. 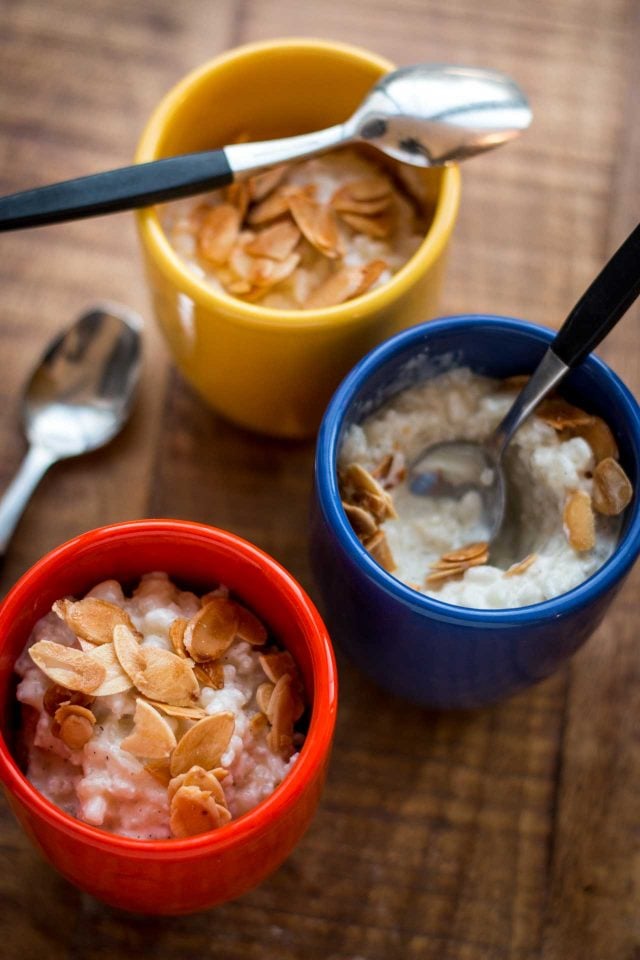 Some bistros in France will serve rice pudding from a big bowl, allowing guests to help themselves. It’s often accompanied by a caramel sauce, a standard one or a salted butter caramel. I went with salted candied almonds this time around, which are simple to make, and are one of my back-pocket hacks to add welcome crunch, color, and flavor to any dessert you shower them over.

The exact cooking time is hard to pin down in a number. You want to cook the mixture until it resembles runny oatmeal and a good amount of the liquid is absorbed by the rice, but there's still some liquid in the pot. (You don't want to cook it until all the milk is absorbed.) The rice pudding will thicken up as it stands. If it's too stiff after it cools, you can thin it out with a splash of milk or cream. For non-dairy people, I've made this with rice milk and it works well, although the pudding will be decidedly less-rich. Using come coconut milk would probably add richness, if you want to use that in place of half the rice milk. If you don't have vanilla bean paste, or if you prefer, you could use a whole vanilla bean, split lengthwise, in place of the vanilla bean paste, which you can add in step #1. (In case you're wondering why I add a bit of vanilla extract, whether using vanilla beans or vanilla bean paste, I find that vanilla extract adds a more rounded vanilla flavor, even if using a bean or paste.) If the pudding is too stiff or thick once cooled, thin it with a bit of milk or cream, to bring it to the consistency you like. I like my rice pudding with this amount of sweetness, but you can reduce the amount of sugar to 4 tablespoons in step #1, then add more when the rice pudding has finished cooking., to suit your personal taste.
1 quart (1l) whole milk
2/3 cup (140g) white rice, preferably round rice
6 tablespoons (75g) sugar, or to taste (see headnote)
Big pinch salt
1 teaspoon vanilla bean paste or vanilla extract, or a combination of both (see headnote)
1/4-1/2 teaspoon vanilla extract
Finely-grated zest of one lemon or orange, preferably unsprayed
1. Mix the milk, rice, sugar and salt in a medium-to-large saucepan. Heat, stirring occasionally until the mixture comes to a boil.
2. Reduce the heat to a simmer and continue to cook, stirring frequently (to keep the rice from sticking together, as well as to the bottom and sides of the pot), until the rice is almost tender and much of the liquid is absorbed, about 20 to 25 minutes. Add the vanilla paste, if using, and continue to cook until the pudding mixture resembles very loose oatmeal and the rice grains are tender, which may take up to 15 minutes longer over very low heat.
3. Remove the heat and stir in the lemon or orange zest and vanilla extract, if using.

Serving: Serve the rice pudding warm, at room temperature, or cold. It's fine on its own, with a dusting of cinnamon, or some candied almonds. In France, it's sometimes served with salted butter caramel sauce.

To make the candied almonds, heat 1 tablespoon of sugar and water together in a skillet, stirring just until the sugar is melted. Toss 1 cup (80g) of sliced almonds in the syrup. Strew the almonds over a parchment- or silicone mat-lined baking sheet, sprinkle with flaky sea salt, and bake in a 350ºF/175ºC oven for until golden brown and caramelized (about 20 minutes), stirring twice during baking, to prevent clumping. (Recipe adapted from The Perfect Scoop.) 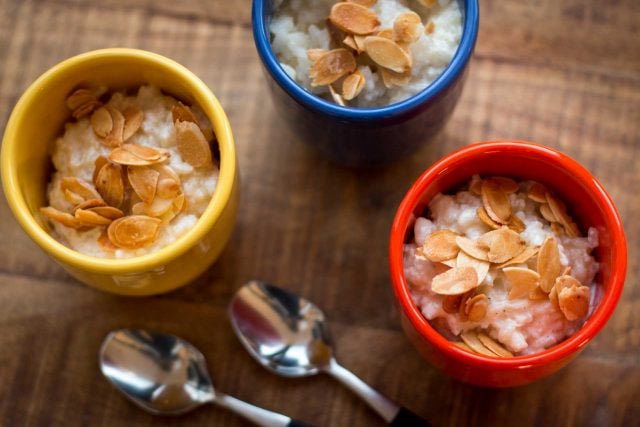