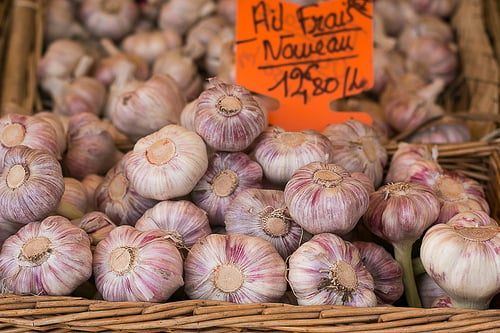 It’s Friday and hallelujah. Not just because it’s the end of the week. But also because I discovered an open hole in my schedule, with the entire day free. And the lure of sunshine coming though my windows was all the prompting I needed to grab my market bag and take a leisurely stroll to the outdoor market on the boulevard Richard Lenoir (M: Oberkampf, Tuesday & Friday). After one of those never-ending winters, it was nice to be able to walk in the sunshine, sans gloves and not being all bundled up in a wool overcoat.

When I arrived, the market was teeming with people who obviously had the exact same idea (although don’t know how they got a day off as well), and I was squinting in the sunlight, taking in the fruits and vegetables, noting the changing of the season. In addition to being able to go out without gloves and an overcoat, another sure sign of spring in Paris is ail nouveau, or “new garlic.” Garlic has a season and it’s starting right now, with violet-hued heads of garlic, piled up in baskets. New garlic is slightly soft, without any of the harsh pungency of garlic that’s been stored for months and months. It’s beautiful and wonderful in aïoli. 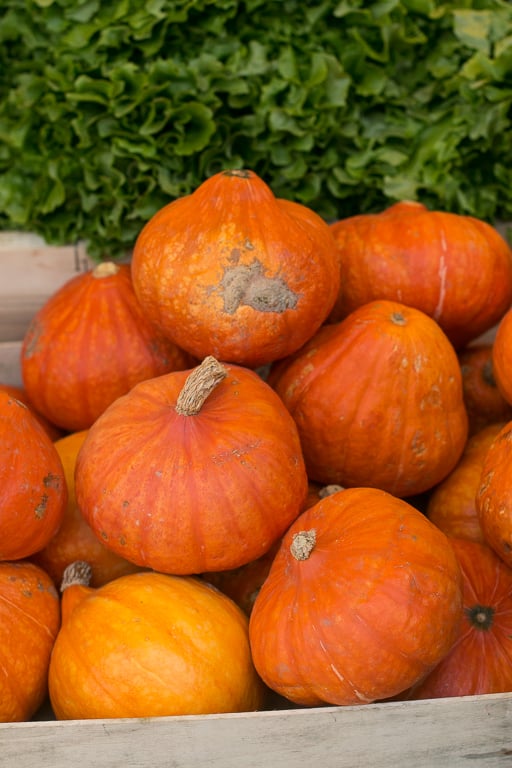 While squash is considered a winter vegetable, all the stands seemed to be carrying small potimarrons, whose name is a mash-up, reflecting their pumpkin (potiron) and chestnut (marron) flavors. Perhaps it’s time to use ’em or lose ’em? I like them roasted and the small ones are particularly attractive when served that way. 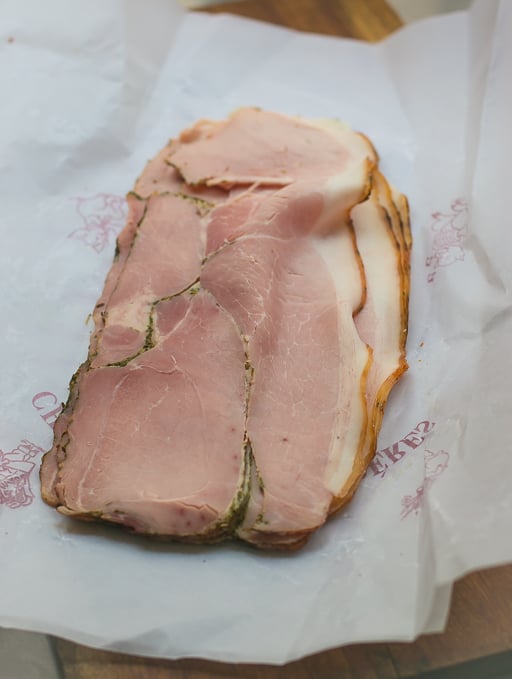 Since the weekend is coming up, when I saw the hunk of rostello at the charcuterie counter (ham roasted with herbs), when I made my way to the front of the line (and no, I didn’t try to cut), I asked for six slices. They often slice ham very thick in France, much thicker than I like, which – being a skeptic – I used to chalk up to them trying to sell you more ham. (Six hefty slices is a better way to sell more ham then six thin slices.) But I don’t like ham that is too thick as it’s hard to chew, even though Romain told me that that’s the way French people like their ham, which is why they slice it that way.

Since everyone’s idea of “thin” is (evidently) a little different, even when I ask for it thin, it’s always a crapshoot and I never know what I’m going to get. (And consequently, how much I’m going to spend.) So Romain said to always tell them that I want it “As thin as papier à cigarette.” And when I asked for that this morning, the charcuterier said to me, “I don’t know what papier à cigarette looks like, monsieur. I don’t smoke.”

I though that was a pretty funny response. And not just because he’s the only person that doesn’t smoke in Paris, but because he’s surrounded by smoked products. So I told him that I didn’t consider him a stranger to smoking, on account of that, which was a good comeback and he laughed. This ham is going into sandwiches on baguettes, with cornichons and perhaps a thin swipe of mustard. (Although thin is subjective.) 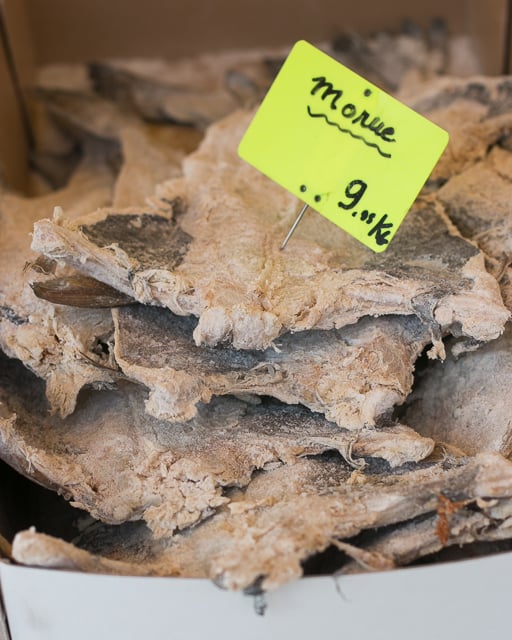 You can usually smell salt cod from a few feet away and even though it’s available all year round, I thought these craggy dried fish were particularly interesting. You need to soak them for a day or two in several changes of water, not just to soften them, but to get most of the salt out. Then you can make brandade (salt cod mashed with potatoes, garlic, and olive oil) out of them. I didn’t buy one today, but I like to stop and look at them. 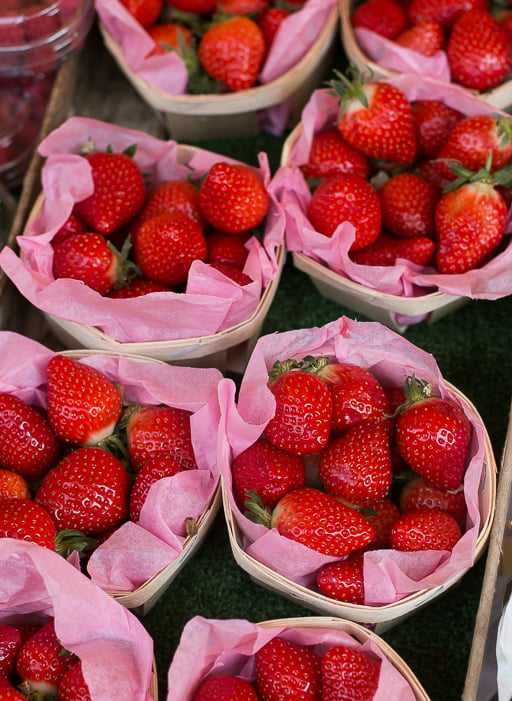 The first fruits to spring in Paris are always strawberries and while the initial offerings come from points south, namely as Morocco and Spain, Parisian gets very excited to see gariguette strawberries. These aren’t as pointy as other gariguettes – and I can’t imagine the vendor selling them as gariguettes if they weren’t true gariguettes, but I thought they were pretty stunning lined up in their little wooden baskets lined with rosy tissue paper, no matter what you (or they) call them. 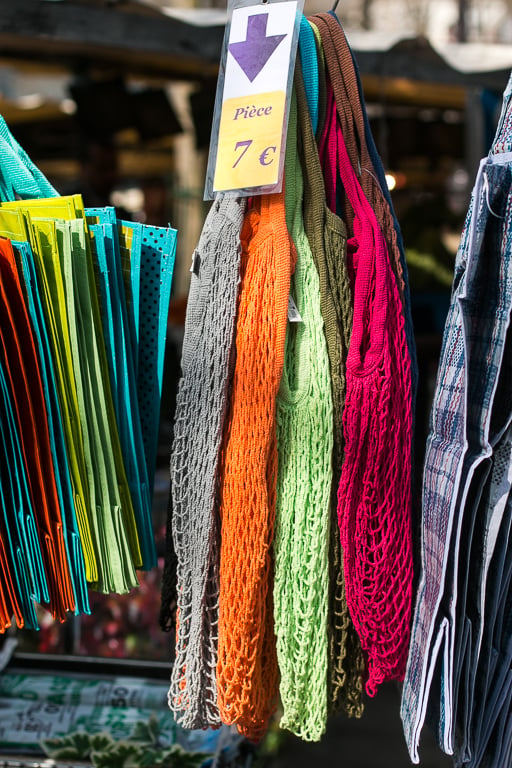 I’ve got bag and bags for days, due to a combination of things. But mostly because people seem to bring me shopping bags from the around the world, which makes me a little suspicious that they think I need more bags – which leads me to think that they think I have so much baggage? But I’ve always liked these mesh French shopping bags and used to have one. While they are pretty, they’re a little hard to use. For one thing, the handles are too small. And some are too long and drag on the ground when you carry them. So you have to hold them up high when you walk, higher than waist level – like mid-chest level, which made me look a little silly. Plus things get caught on the mesh filaments when you walk, and I’ve been snagged by a few things (and on a few people, who weren’t amused). Still, seeing them on the way out was a sweet little reminder of how fortunate I am that I’m able to shop at a market like this. And how nice it is to have a day off, with beautiful weather, to do so!