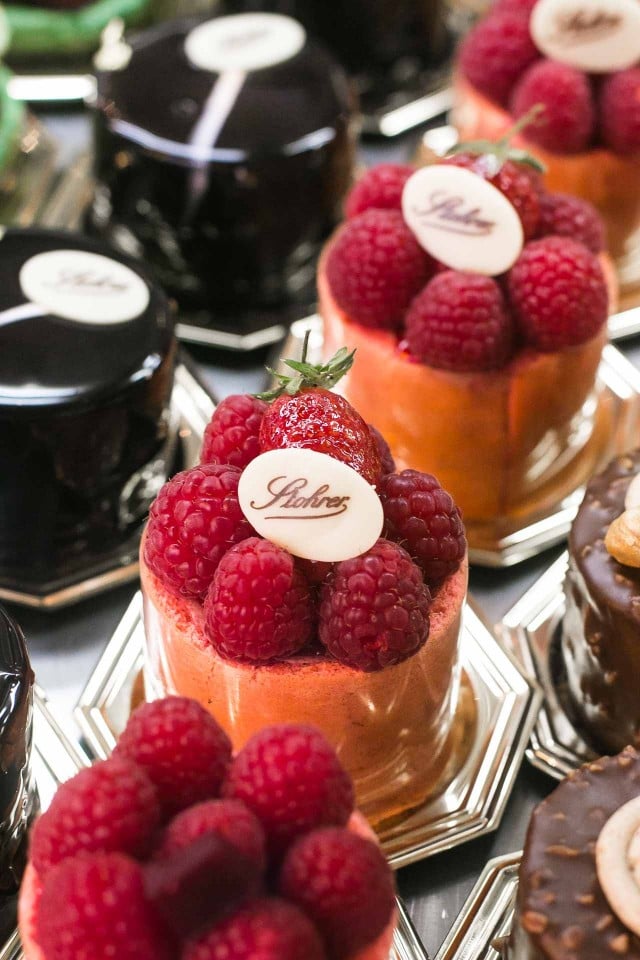 When people ask me “Why did you move to Paris?” I’ll usually stop, point to the nearest cheese shop or bakery, and let them figure it out for themselves. 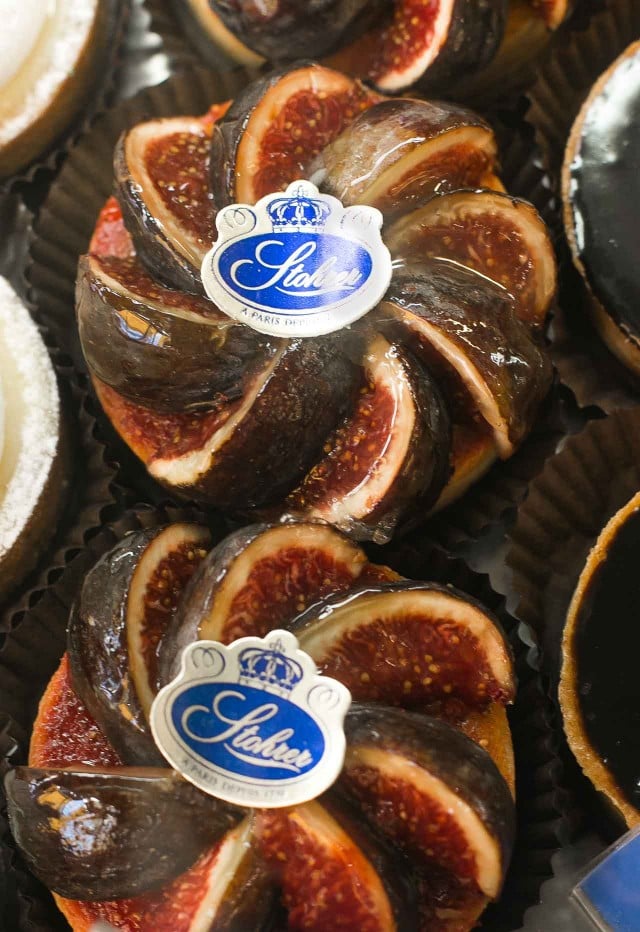 There are a lot of pastry shops in Paris, over a thousand of them. But the first was Stohrer, which opened in 1730 by pastry chef Nicolas Stohrer, the pastry chef for Louis XV of France and his wife, the daughter of the king of Poland. I can only imagine what the shop looked like back then, but I’m sure it was quite a different place. 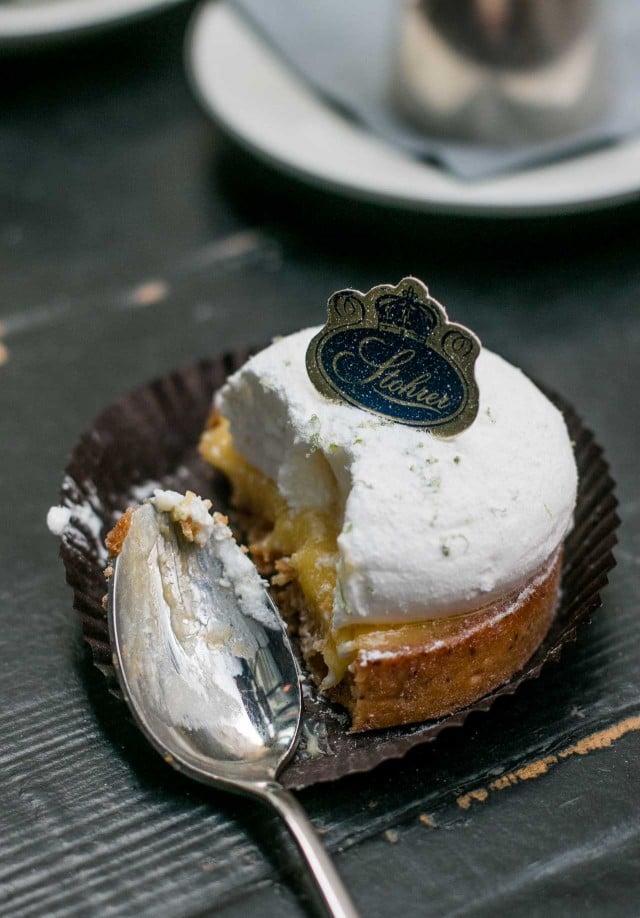 Today the rue Montorgueil is a thriving, busy pedestrian street, with the occasional motor scooter racing down it, beeping its way through the crowds of shoppers. The street has changed a lot in the last decade or so, since I first walked down it. During the day, there are open air shops selling produce, several excellent cheese shops, a crier (a fish market when the young men in rubber boots call out what fish they are trying to sell that day), bread bakeries, and cafés whose rickety seats spill out onto the streets, which are occupied with early risers getting in their first cup of coffee, to a crowd of hipsters and other locals, drinking beers until late in the evening. 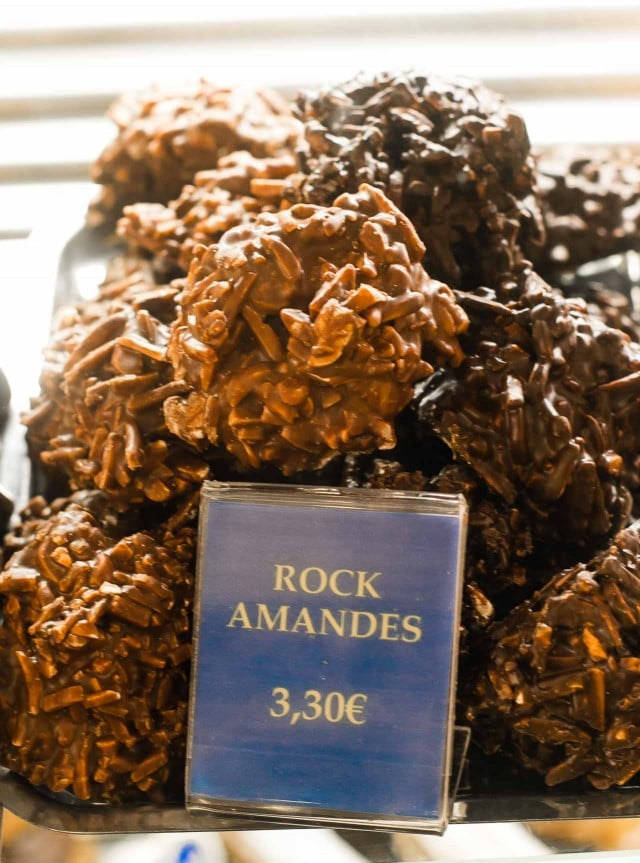 For me, it’s not a visit to rue Montorgueil without checking out the always-spectacular windows at Stohrer. I love looking at the pastries, of course, although the window for the traiteur items (take out) is equally spectacular, with salads served from large porcelain bowls, œufs en gelée, Bouchées à la Reine puff pastries with rich cream sauce spilling out, gratins, and some very impressive savory tourtes sold by the wedge. 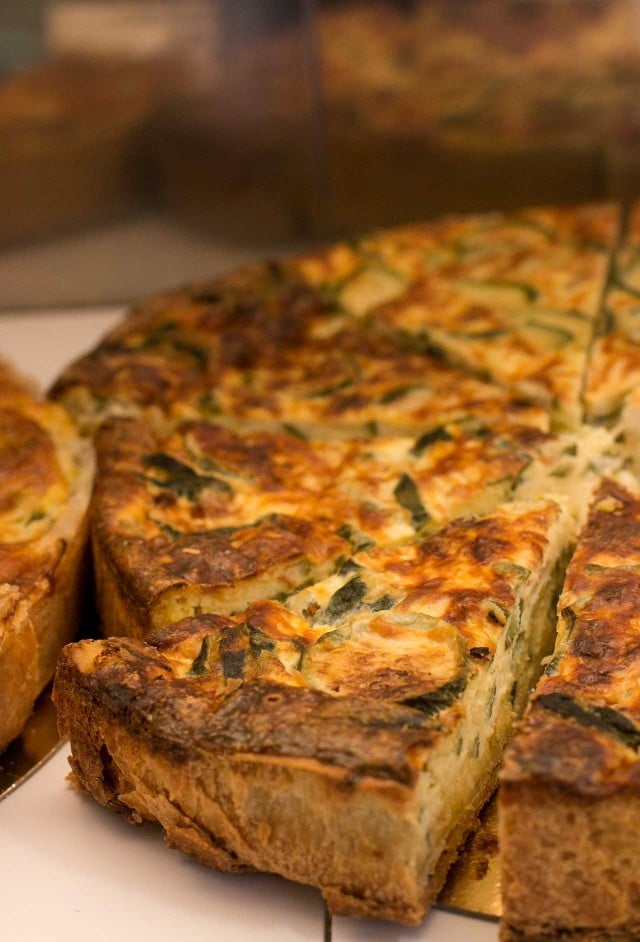 Inside the shop, underneath the intricately painted and gilded ceiling painted by Paul Baudry (who also decorated the Paris Garnier opera house), it’s hard to stand and gawk because you’ll be dodging locals, popping in to pick up a treat, be it a morning pastry, such as a kugelhof (below), a yeasted cake with raisins and nuts, or a Paris-Brest, fashioned not in the traditional circular shape, but long and slender, like an éclair. 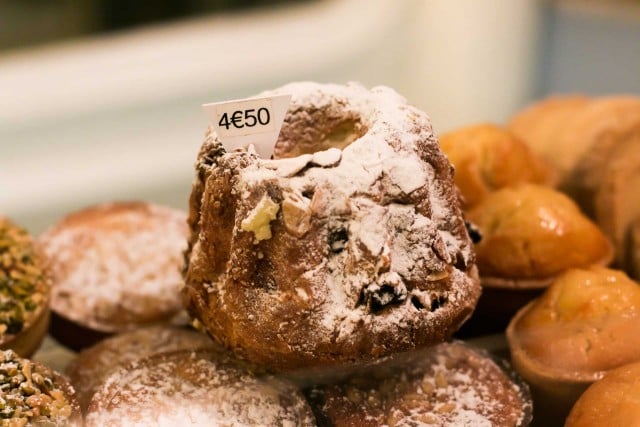 I skillfully deflected any wrath by iconoclasts if I had called l my own éclair-like riff on Paris-Brest that same name. So I called mine Paris-Paris, in My Paris Kitchen. Bravely, Stohrer doesn’t seem to mind (maybe because they don’t have a blog), naming their variation of the hazelnut praline-filled choux pastry, which is traditionally round to mimic a bike wheel since the pastry was invented to commemorate a Paris to Brest bike race, the same as the original. 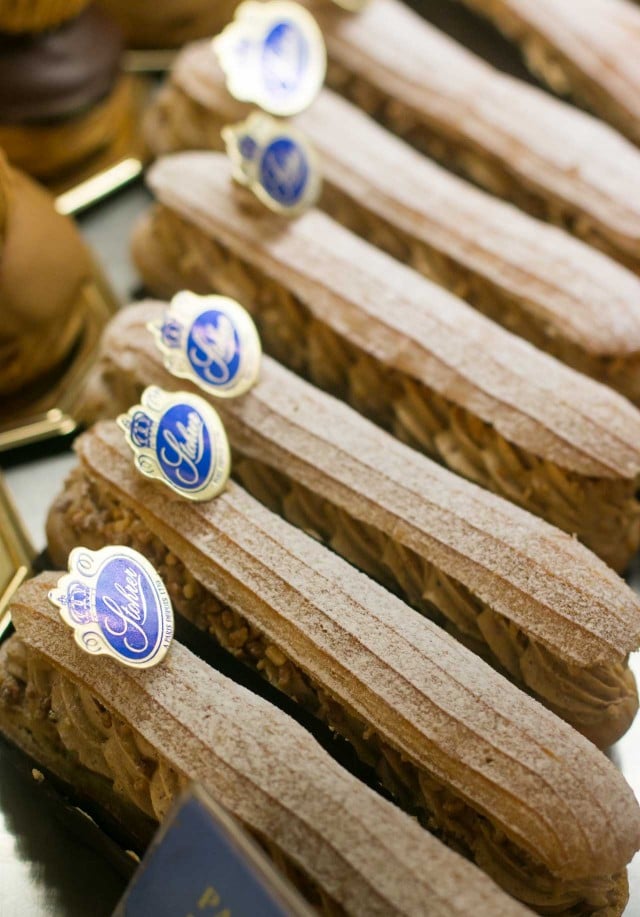 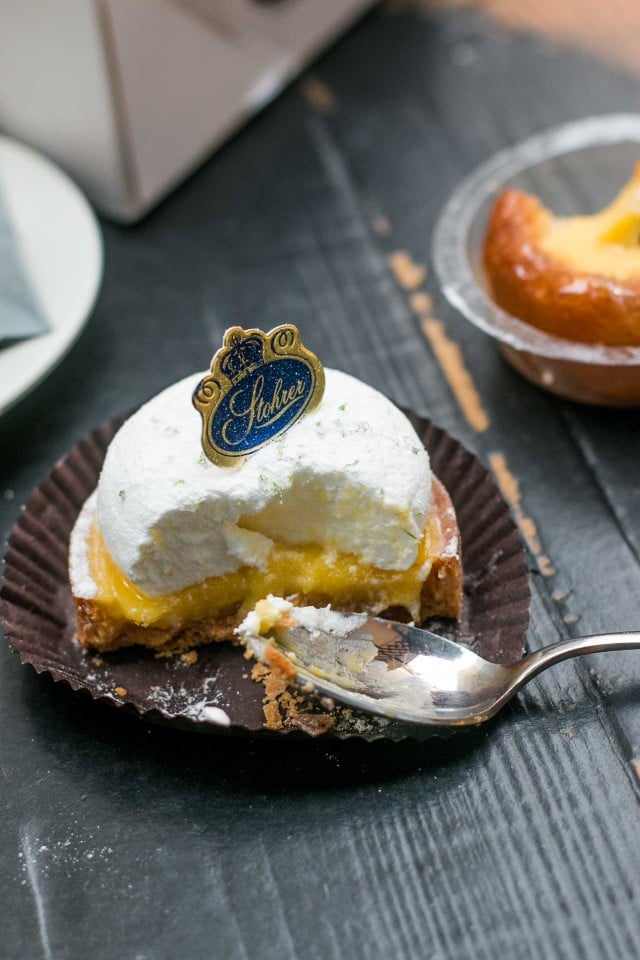 There’s quite a line-up of classic French pastries at Stohrer but the most famous is the Baba au rhum, a yeast pastry soaked in helluva lot of rum, brushed with apricot jam, and garnished with candied cherries and angelica. The story on their website goes that Chef Stohrer invented this pastry to use up some dry Polish brioche. Other versions credit a Polish kitchen assistant with being the one to soak bread in sweet wine to make it a dessert. Since I wasn’t there, I can’t say for sure. But I do know if you’re going to get one in Paris, this is the place to get what is (most likely) the original. 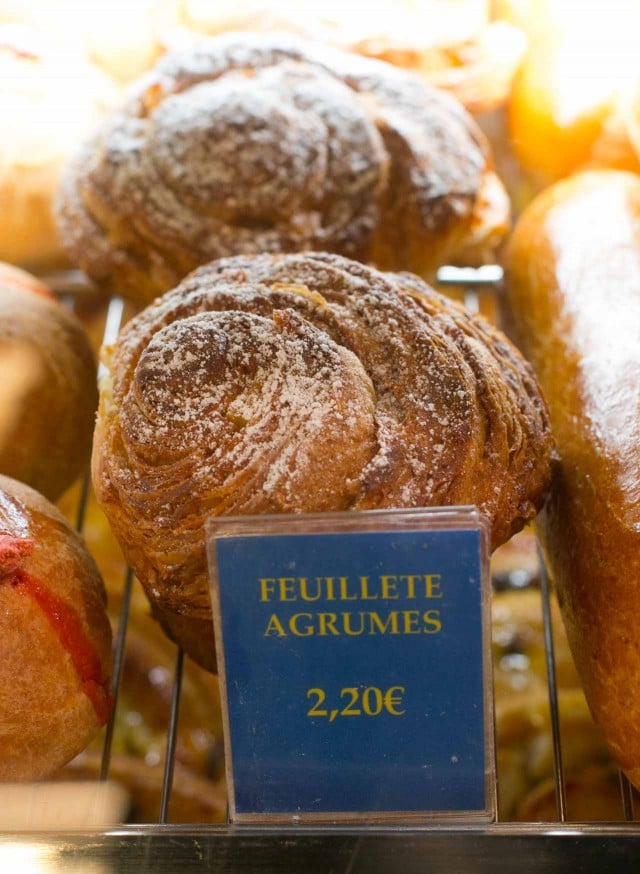 Other pastries include Mont-Blanc (below), a spaghetti-like mound of chestnut cream topped with a candied chestnut. Every winter holiday season, people write to me, asking how to candy chestnuts like these. The process to making marrons glacés is pretty challenging, especially if you hope to get a bunch of entier (whole) ones after all that simmering and cooking over the course of several days. Which explains their hefty price tag, often selling for as much as €4 a pop. So it’s no wonder people want to make their own! 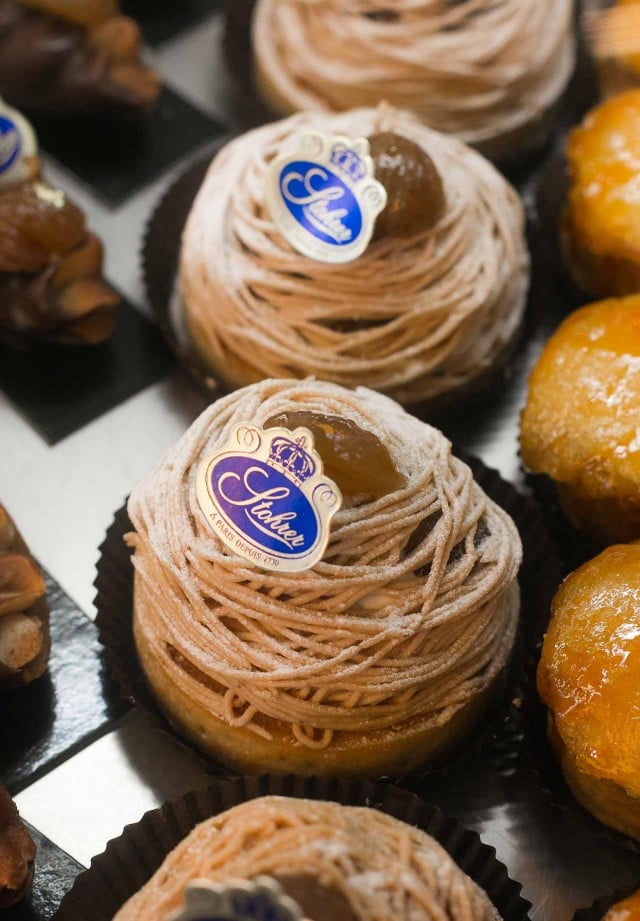 Roses are popular in Paris pastries, many crediting Pierre Hermé for starting the trend with his Ispahan, a mélange of rose, lychee and raspberry flavors. Rose-flavored desserts are not my favorite – I’m a chocolate, or lemon, guy – but I can certainly appreciate the beauty that goes into making macarons that riff off those flavors. 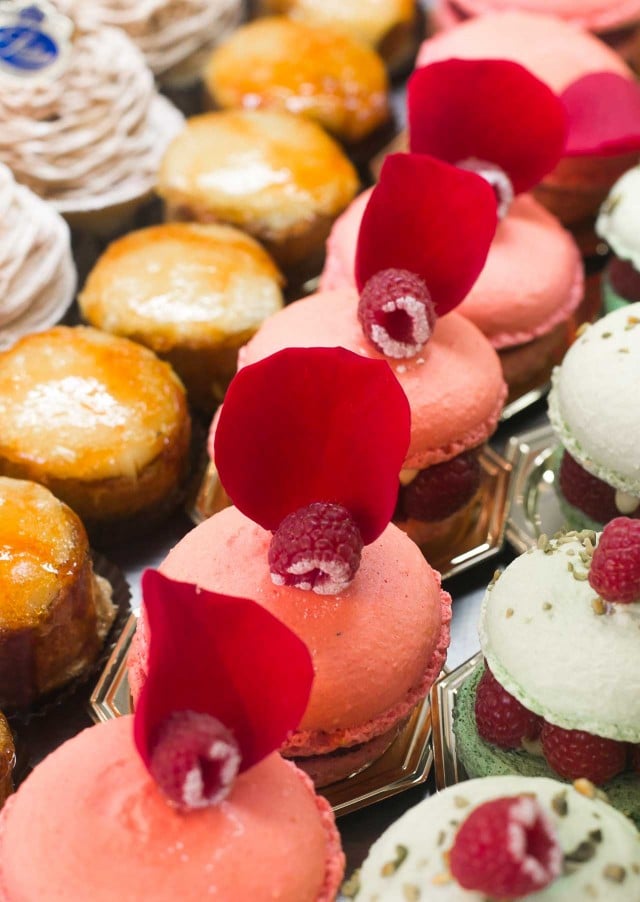 When I was heading out the door to go over there recently, I ran into a neighbor and after a brief chat because I was in a hurry, he asked where I was going. “Stohrer,” I said. 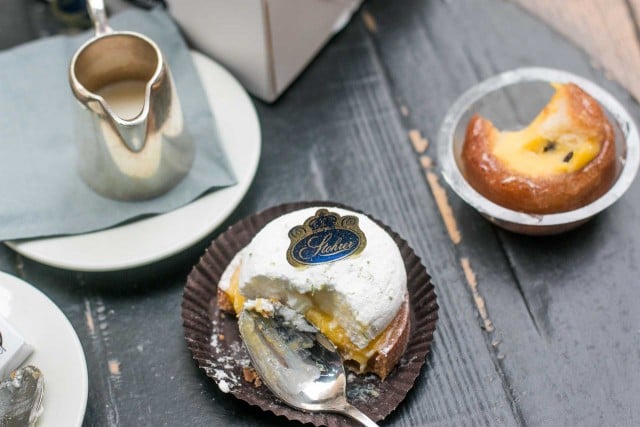 He said, “Oh, they have the best tarte du citron. I love them!” So I was extra-anxious to hoof it over there. And sure enough, the lemon tart was excellent. Some in Paris can land on the sweet side, but I like lemon tarts that lean more toward tart and tangy, with just a touch of sugar to balance the juicy acidity of the lemons. A plouf of whipped cream or meringue on top never hurts either. 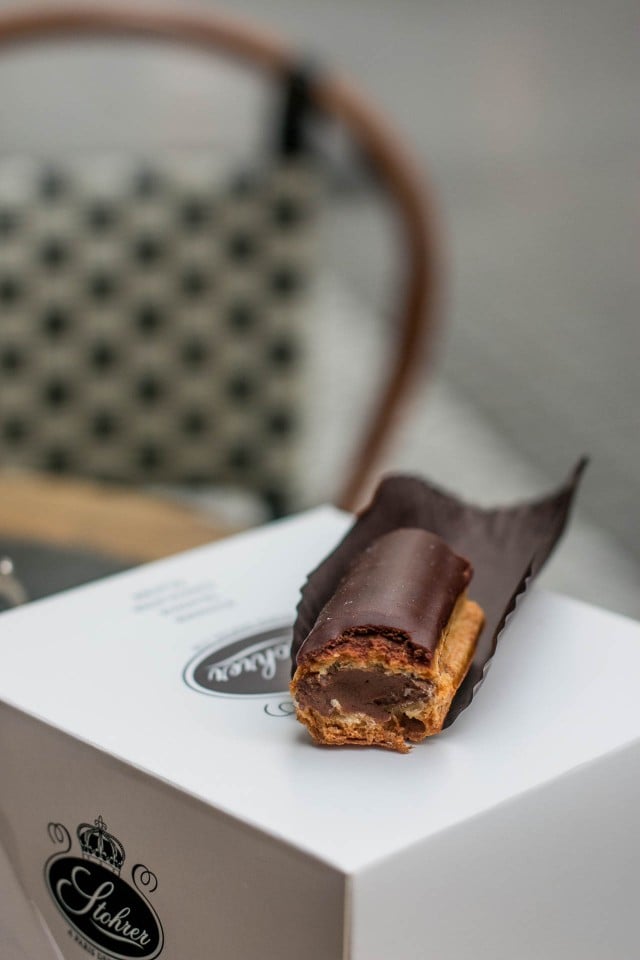 Being a good neighbor, as thanks for the tip, he got a little gift box upon my return. Unlike some of the other bakeries and pastry shops in Paris, Stohrer hasn’t expanded to Las Vegas, New York, or Tokyo, although they do have a rack outside holding the famous postcards depicting their line-up of classic pastries, they don’t have a line of baba-scented candles or teas being sold as souvenirs. (And personally, I’d prefer to have a lemon tart or chocolate éclair as a gift, rather than a key chain.) In spite of their fancy pastries and decor, they are still a neighborhood bakery, selling baguettes, cakes, chocolates, and even meals, to the constant stream of regulars and visitors who come into this historic pastry shop seven days a week. 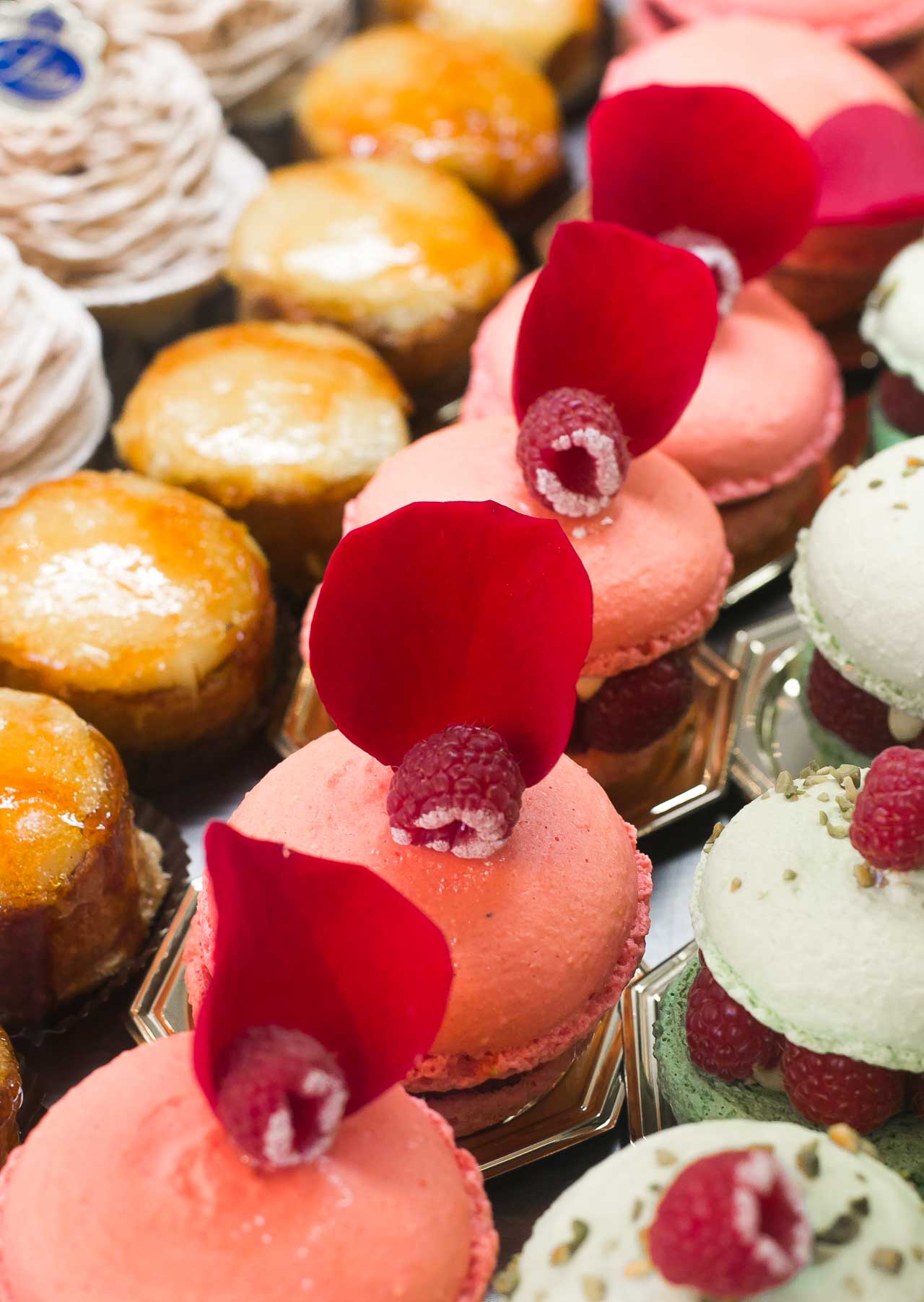