I’m often asked about kid-friendly things to do in Paris. Since I don’t have any kids, I asked my friend Paul Bennett, a writer who runs Context Travel and has three small children, to contribute a guest post: Top Ten Things to Do in With Kids in Paris. Thanks, Paul! -DL 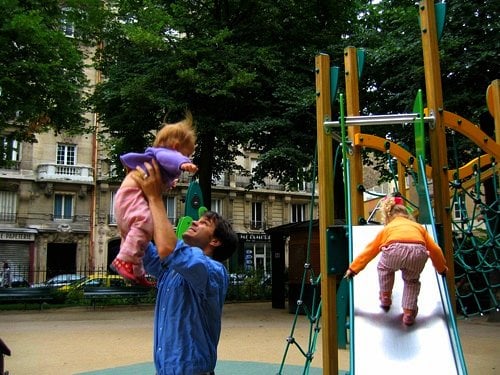 It always sounds glamorous when I tell people that my wife and I split our time between Paris and Rome. But that runway-model images wears off pretty quickly when I mention that we have three kids and a dog and spend far less time sipping kirs at sidewalk cafes than stacking the kids on top of each other in order to fit ourselves on the metro during a rush-hour dash to school, debating the pros and cons of each arrondissement’s public pool, or waiting desperately for the ferris wheel to open in the Tuilleries–the high point of a kid’s year in Paris, let me tell you.

Yes. Not in the please-run-screaming through-our-restaurant way that Rome is, but child-friendly in that there are tons of well-organized, exciting things to do with children all over the city. Of all the places we’ve lived, our kids have been the least bored in Paris, Sundays notwithstanding (everything is closed on Sunday!) Nothing symbolizes this better than the clean and tidy parks sporting functioning play equipment that dot the city. Some of these are large and well known, but many are tiny little “pocket parks” that always seem to be around the next corner. My favorite is the place des Vosges where you can build a sandcastle in the shadow of 17th-century housing development, entertaining the kids in a sublime architectural environment.

Of course just being in Paris is educational in itself for kids. Learning how to mix it up in a Parisian sandbox without speaking French is a life lesson I could never replicate in the US. It’s amazing how quickly an anglophone child can grasp the concept, “c’est MOI!”

Caveat: My kids are still young (between the ages of 2 and 6), and so my experiences with children in Paris tend toward the more playful. Check back in a couple of years and I’ll give you my thoughts on entertaining tweens in the city of light. Until then, here are my top ten things to do with kids in Paris:

This is hands-down our very favorite children’s museum in the world. Everything works and is smartly designed. We usually have to drag the kids away–and I’ve been known to lose an hour or two watching the how-to-make-a-baguette video. Buy tickets ahead and make sure you plan around their pre-scheduled entrance, although if you arrive early, there’s always the fantastic Parc de la Villette just outside.

This is a reclaimed industrial landscape turned into futuristic park. Most of the playful park structures were designed by Bernard Tschumi with a child’s imagination in mind. I’ve lost entire days here with my oldest daughter Stella (6). Our favorite spaces include the enormous dragon slide and the bamboo maze. 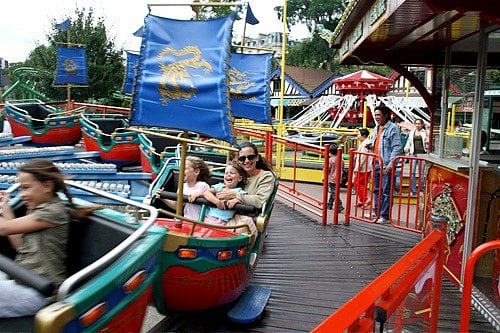 This children’s park was actually designed in the 19th century, and although it’s been updated with lots of cool rides and play equipment there’s still an air of old Paris about the place. (The jungle boat ride with its period depiction of natives sitting in the grass and pith-helmet wearing colonialists is particularly, er, historic.) We love it because most of the play equipment is designed for the park itself (instead of purchased off the shelf and plopped there), which makes it far more intriguing and novel. One should definitely arrive on the “petit train” that leaves from the Porte Maillot, a narrow gauge choo-choo that chugs through the perimeter of the Bois de Boulogne before depositing you at the entrance. This place has it all: a zoo, a sprinkler park, huge expanses of park equipment for every age, and a boardwalk-like section of rides and junk food. I’ve been arguing for years that we should really just build a house in the woods here and move in permanently.

“Plage” means beach, and in addition to truckloads of sand that are dumped along the banks of the Seine in an artsy effort to create an urban beach this late July and August festival includes food stands, bouncy houses, lots of concerts, and cool games. Another annual activity for parents of really small kids is chasing them down before they fling themselves into the river. You see lots of harried first-time parents participating.

From December to March, the city sets up ice rinks at strategic locations around the city including in front of the Montparnasse tower and at Place de l’Hôtel de Ville (the square in front of City Hall). The latter has the advantage of being able to enjoy views of Notre Dame as well as a small luge run–both inspiring on a gray winter day.

Along the Seine in the 5th arrondissement, the Jardin des Plantes is a grand botanical garden in the middle of the city and a favorite spot for strolling. This is a good place to let the kids run and sniff flowers. There’s also a ménagerie (zoo) with some cool monkeys and an old-school natural history museum with huge, dusty dinosaur bones and not a trace of the frenetic edutainment that goes on in so many museums these days. Here it’s just bones–tons and tons of them–all crowded into a majestic hall. You feel like you’ve stepped back into the 19th century. The kids are awestruck. 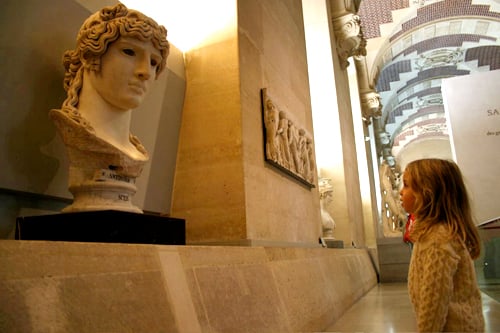 The Palace of Discovery is the city’s second science museum and really oriented towards younger kids (under 12). It’s located in a beautiful 19th-century building that is a leftover from the World’s Fair but is decked out with all the latest technology. The video of open-heart surgery is a highlight. Although everything’s in French, the topics and presentations transcend language.

Not only is this central and a great place to exhale after visiting the Louvre, but it’s a great place for kids. We love the fountain in the middle where you can rent a model sailboat. Also, in the summertime, they set up a carnival with a Ferris wheel, that gives the best views of Paris outside of the Pompidou’s rooftop bar.

The southwest corner of this Renaissance garden is devoted to kids, including acres of slides and swings. It costs 1,50 Euro to enter and espresso is another euro; but sitting in the shade of century-old plane trees while the kids run themselves ragged… priceless. There’s even a hundred-year-old puppet theater run by a crotchety old man. And, of course, the famous carousel.

And finally, to merge the fun and the educational, don’t forget our walks of Gothic Paris, the Louvre for kids, and Montmartre. We even run an excursion to Giverny with a plein-air (open air) painting lesson for kids. 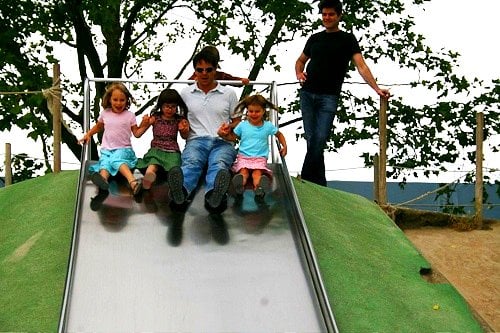 Thanks to Paul and his wife, Lani, for their insights and list of places to bring the children. There’s a few I’m putting on my own list for a visit! Check out their site, Context Travel, a collective of scholars who organize and lead walking seminars of the world’s cultural capitals–including Paris.

You can also learn what they’re doing to promote sustainable tourism. They also have a lovely Paris rental apartment which is comfortable and well-located in the historic Bastille quarter. -DL