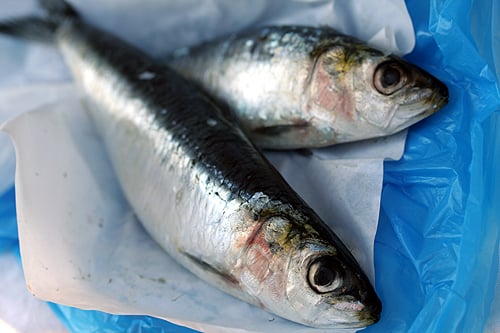 Proving that eating fresh, flavorful, sustainable food doesn’t have to be expensive, time consuming, or elitist, I walked to my local market this morning and bought these two sardines.

I decided a few months ago to try and limit my fish-eating to sustainable species, which meant bypassing my formerly-beloved tuna steaks and forgoing sushi, in favor of critters like these slender sardines.

This morning, passing by the poissonière, I picked up these lovely little fellas, shiny and bright-eyed, resting on a pile of ice. Unfortunately, the ice probably isn’t all that sustainable—but I’ll take a bit of global-warming in lieu of stinky fish.

And they insisted on giving me a plastic bag, even though I insisted that I didn’t want one.

(Actually, they insisted on double-bagging them.) 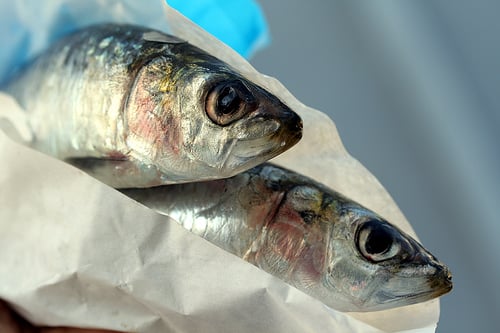 I asked for two and when he wrapped them in paper, weighed them, and handed them over, I was surprised when he told me the price: 64 centimes. Such a deal!

So, what to do with fresh sardines? 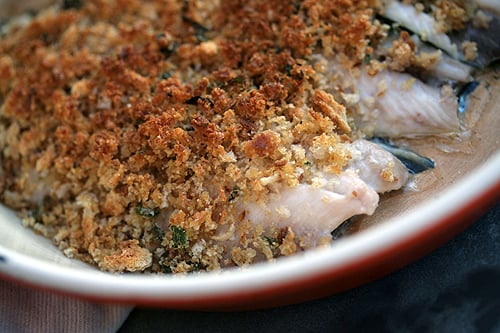 If they’re really fresh, they can be marinated in lemon or lime juice with a few sprinkles of salt, then chilled for a bit, and served raw. The fillets are delicious draped on top of heavily-buttered bread.

I filleted my catch du jour for tonight’s dinner. The fillets got topped with oiled dry breadcrumbs mixed with a tiny bit of minced fresh garlic and flat-leaf parsley, and I broiled the fish until the crumbs were nice and crunchy. Gluten-free folks could top them with crumbled sliced almonds, salt, and herbs.

Vegan? Omit the fish—the breadcrumbs are good enough on their own.

The only problem I had was cleaning the little buggers. It wasn’t all that difficult, but now my drain is full of fish scales and my hands smell a bit fishy. I’d of paid twice the price for the sardines if they’d been cleaned.

But still…were they worth sixty-four cents?