The Best Brownie in London 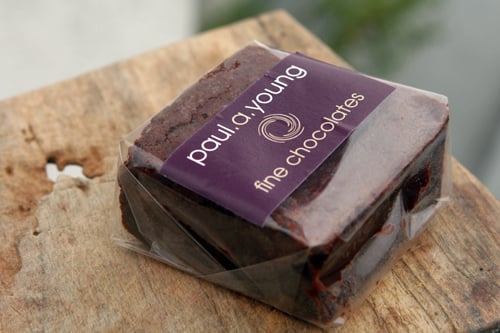 If you skip over the fact that I made three trips in the past thirty days, and have two more coming up in the next two weeks, I don’t really travel all that much. (And it’s funny because some people like to try to point out inconsistencies about things I write about, which is amusing because I take even greater pains to point them out myself.) Before I moved to Europe, I was always quite surprised when I thought Europeans spent all their free time and weekends heading to other countries, visiting new cities, and immersing themselves in foreign cultures, when quite a few of them stay at home in lieu of hitting the road.

Then I moved to France and stayed at home almost all the time. (In my defense, the mind-numbing amount of paperwork one has to do contributes somewhat to the inability to leave one’s house.) The other thing that keeps me from traveling is the difficulty I have is navigating unfamiliar cities. I know my way around Paris like the back of mon main, but plop me in the center of Berlin, Lisbon, or Lausanne, and for the first day or two I spend a considerable amount of time getting hopelessly lost. 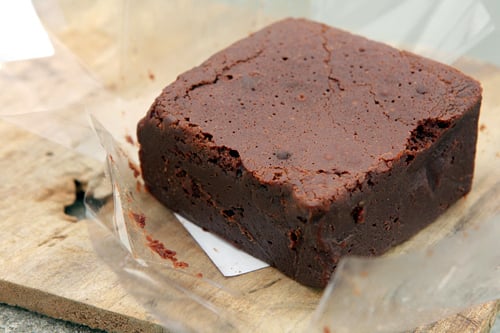 Some people like that. I often read travel stories where the writers “claim” to enjoy serendipitously “just taking off in any direction, and seeing where it leads.” I, on the other hand, need a specific destination (invariably food-related), and confirming, then re-confirming – twice, that I have in my messenger bag a notebook, a pen, chapstick (actually two, in case one runs out, because that would be a crisis), a camera, a Sharpie, a map, a reusable nylon shopping tote, sunglasses, eyeglasses, facial tissues, and my iPhone, which I once forgot and had a full-on anxiety attack when I discovered that a few hours later.

The day I went to London, I had another kind of anxiety attack (this one, kind of justified). I checked my ticket the night before and saw the departure time of 9:36 am. Since the métro is nice and speedy, I woke up at 7 am and figured that’d give me time to have breakfast, then leisurely head for the Gare du Nord where the Eurostar takes off from.

After setting a pot of coffee on the stove, dropping a couple of slices of bread in le toaster, and padding around in my pajamas in my usual early morning daze, I thought that maybe I should double-check my ticket just to make sure of the departure and arrival time. So imagine my surprise (which is putting it mildly…) when I pulled out the ticket and realized that 9:36 am was the arrival time, not the departure time, which was 8:14 am. Which was about 43 minutes from now. 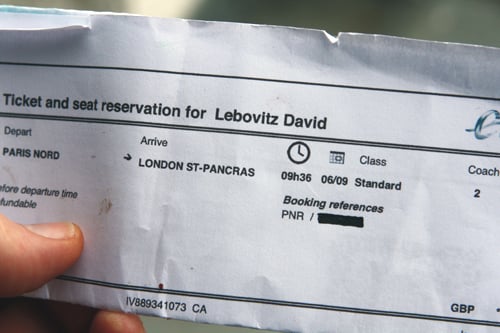 I swear, I haven’t eaten that fast since I worked in the restaurant business, when if I actually took two minutes to eat something, invariably the moment I put something in my mouth, a waiter would come racing over to me with an urgent need for some sort of cake or dessert for a guest. Once I was using the restroom, making a pit stop for less than one minute and two waiters were banging on the door, anxious for me to hurry up and get out so I could get them their desserts. And people wonder why I’m such a nervous wreck all the time – even in the loo.

Anyhow I made my train, although I got a few funny looks balancing a square piece of hastily buttered toast in my mouth running down the métro stairs with my little suitcase, and ended up in London, bright and (a little too) early. Although I was there doing some events my publisher set up for me, I had a few free hours one afternoon and went for a little walk, in spite of the fact that I neglected to grab my messenger bag and had to jam all those aforementioned things into my four pockets.

For some reason, no matter where I seem to go, there’s always somewhere better that I’ve missed. I don’t know how I continue to miss all these great places that are better than the ones that I’ve been to, when folks write “Oh, you should have gone to…” It never fails to happen – and I’m beginning to suspect it may be a way to try to make me feel guilty for lying in my hotel bed in my fluffy, terry-cloth bathrobe watching back-to-back reruns of Scrubs and snacking on mini After Eight mints that are sold in a roll which I found at the John Lewis supermarket and am now kind of addicted to. But when I passed the window of Paul A. Young chocolate shop on my walk, there was a pyramid of brownie squares with a big sign just above, proclaiming them as “The Best Brownies in London.” And I realized if I didn’t go in and buy one – after rifling through the pile to get the one with exactly the right ratio of crust to brownie, of course – I’d be in big trouble. 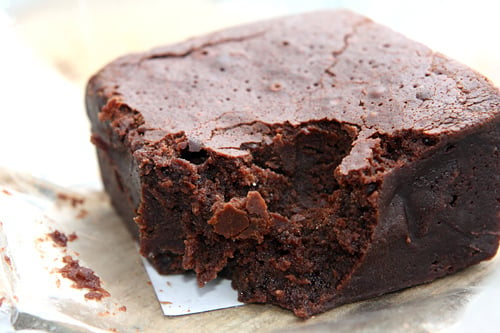 I’m usually wary of anything that calls itself “The Best”, since “best” is pretty subjective, and I didn’t want to send them my own message that began with, “Oh, you should have called them…” I ended up bringing it back to Paris with me because I was pretty stuffed from lunch. And I figured even the best brownie should survive one extra day of shelf life. Although there’s a cooking magazine that labels a good number of its recipes as “The best” of their genre, I’ve only had the gumption to call only one of my recipes in one of my books “The best”. I think if you’re going to ascribe that term to something edible, it darn well better be the-most-amazing-thing-you’ve-ever-put-in-your-mouth.

So, was it the best? And is anyone going to say, “Oh, you should have…1) eaten it the same day, 2) bought it only on the third Friday in May, only during even-numbered years, or 2) purchased it only at their store that is miles away from anywhere and takes three tube transfers to get there, where all the sales clerks are sacred virgins whose divine purpose on earth is to only wrap and sell Paul A. Young chocolate brownies”? If you like fudgy, very gooey brownies, similar to baked ganache – with a texture similar to my Chocolate Idiot Cake – these are the ones to beat. 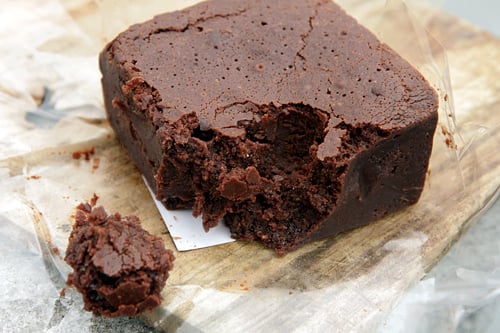 (And if anyone is going to say, “Oh, but you should have tried the ones with the nuts in them”, they offer three different kinds at the shop and you’re welcome to head in there and do your own write-up of them. But be sure to add at least half-dozen paragraphs of completely unrelated stories before it.)

I know that I should have gone to all the bakeries in London to see if it really is The Best Brownie in London, but since I only had one brownie while I was there, it was indeed, the best brownie I ever had in London. And if I had to stack it against a pyramid of others, my guess it that it could certainly hold its own. But I probably shouldn’t jump to conclusions because I’m sure that next time, there are other places that I should visit – just so I don’t feel guilty about it.

How to Make Perfect Brownies (The Guardian)