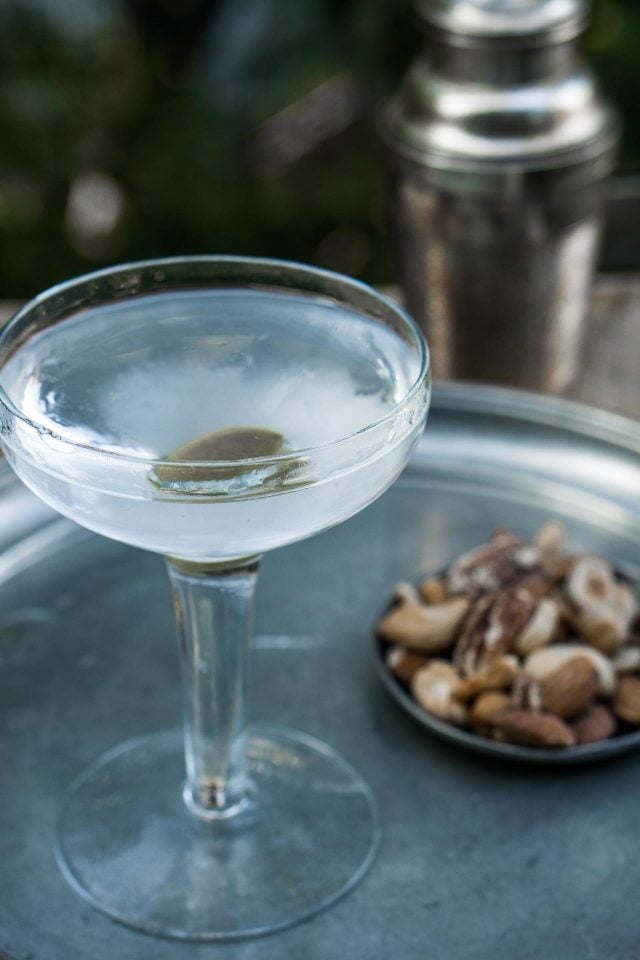 It’s funny how two ingredients can inspire so much discussion, conflict, anticipation, one-upmanship, derision, desire, ire, and postulating. Yes, I’m talking about the Martini cocktail. From what kind of gin to use, how much (if any) vermouth is added, whether it’s shaken or stirred, if you should add bitters, and whether an olive or lemon twist is preferred, few seem to agree on what makes a perfect martini. And let’s not forget vodka martinis, espresso martinis, appletinis, Gibsons, dirty martinis, Vespers, etc. 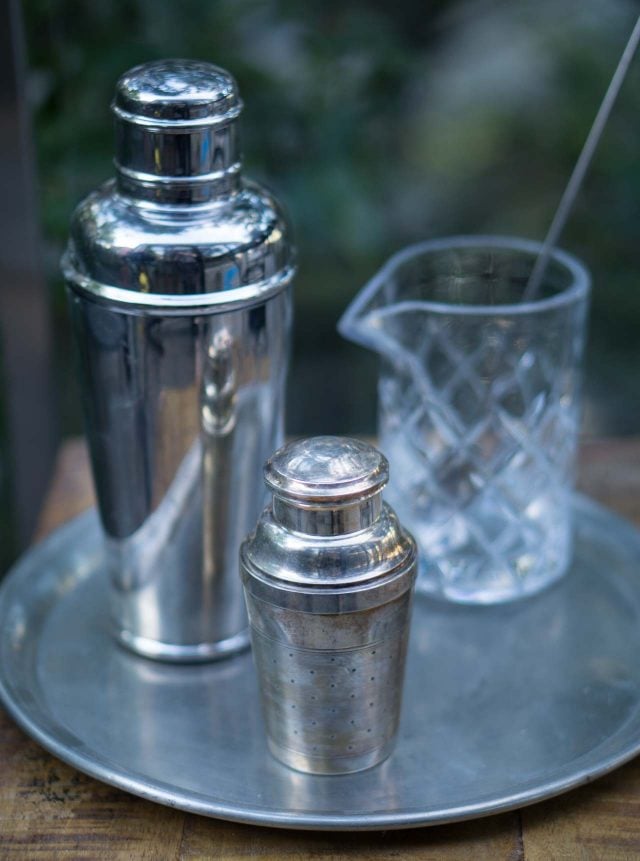 I started drinking martinis sometime in the early ’90s, I think. After work, someone would break out a bottle of Sapphire gin, we’d put on some mood music, and sip ice-cold martini cocktails in the kitchen, pulling up stools at the counter where we’d spent the night preparing food, and serving it. I also lived near the infamous Persian Aub Zam Zam on Haight Street in San Francisco, where Bruno, the owner, would kick anyone out if they didn’t order a gin martini, or have the temerity to sit at a table, or order anything as frilly as a Cosmo. Any of those actions would get you booted from the premises. He’d holler from behind the bar, “Why don’t you go to the bar down the street? You’ll like it there better” to the bewildered potential patrons, before slunk back out the door.

Bruno would “pound” his martinis with a muddler in a cocktail mixing glass. (He also only used Boord’s gin, poured from 1.75 liter jugs.) Anyone who thinks you can bruise gin would not only have gotten a reprimand from him, but nowadays from every liquor expert; you can’t “bruise” gin. If that was the case, every case of gin that’s been shipped would be black and blue from the bumpy ride Say what you want, though, his martinis were excellent. 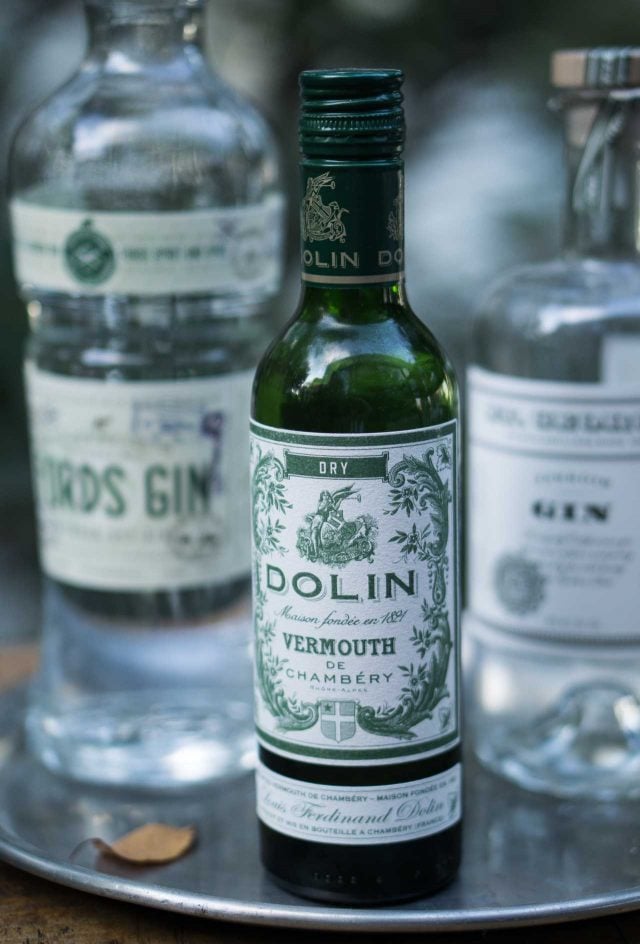 Aside from the restaurant kitchen, and Bruno’s place, another San Francisco favorite for martinis was Bix. It was the height of elegance, at least to us unkept restaurant line cooks, who could feel a little more swanky sitting at their bar, which always had a big, snow-like tub of crushed ice on it with martini glasses upended in it, ensuring that they’d be icy-cold when filled. I was reminded of Bix, which is still going strong, when I was reading The Martini Cocktail: A Meditation On the World’s Greatest Drink, with Recipes by Robert Simonson.

According to the book, Doug “Bix” Biederbeck’s objective was to come up with a martini that was as cold as possible, so their martinis are shaken, but not overshaken, which would dilute the drink too much. When poured into a glass, a shaken martini sometimes has whisper-thin ice chips on top, that dissolve instantly when the drink hits your tongue, making it feel extra-cold.

People like to chime in that ice chips don’t belong in a martini but in Robert Simonson’s book, but claiming authenticity is tricky and can backfire, as at a talk I went to when the book was released this fall, Robert Simonson noted that one theory about the origin of the martini (there are several, noted in the book) is that the original martini may indeed have been served on the rocks, and got its name from Martini, Sola & Cia, now Martini & Rossi. The same company also makes Noilly Prat vermouth in France. That theory – which Robert concedes may not be plausible – would mean that the martini could be of European origin. People don’t associate Europe with cocktails, but gin and tonics are popular in Spain – and gaining in popularity in France, so perhaps there’s some merit to that theory? 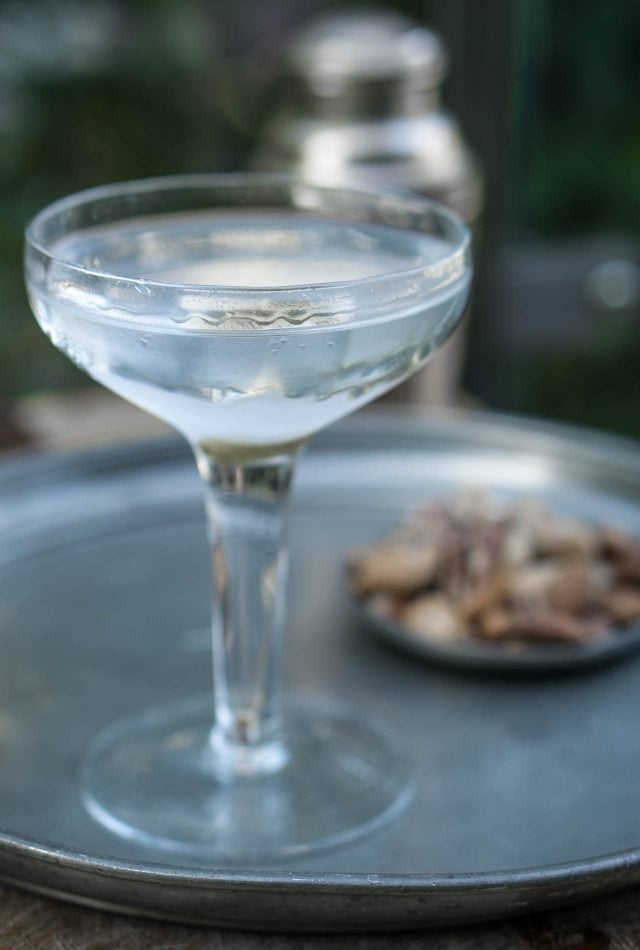 One theory I think we can all agree on is that you should drink what you like. To be as equanimous as possible. The Martini Cocktail features a wide range of martinis, including a vodka martini (which is really a different drink, called the Kangaroo), Toby Cecchini‘s martini with a bit of Junmai sake (which he calls “A Martini,” rather than “The Martini”), Dale DeGroff’s martini which uses amber vermouth, the 50:50 martini from Audrey Sanders of Pegu Club which is half gin, half vermouth, as well as a martini-on-the-rocks.

I was delighted to see the Martini from Bix in San Francisco in the book, and decided to shake one up for myself. 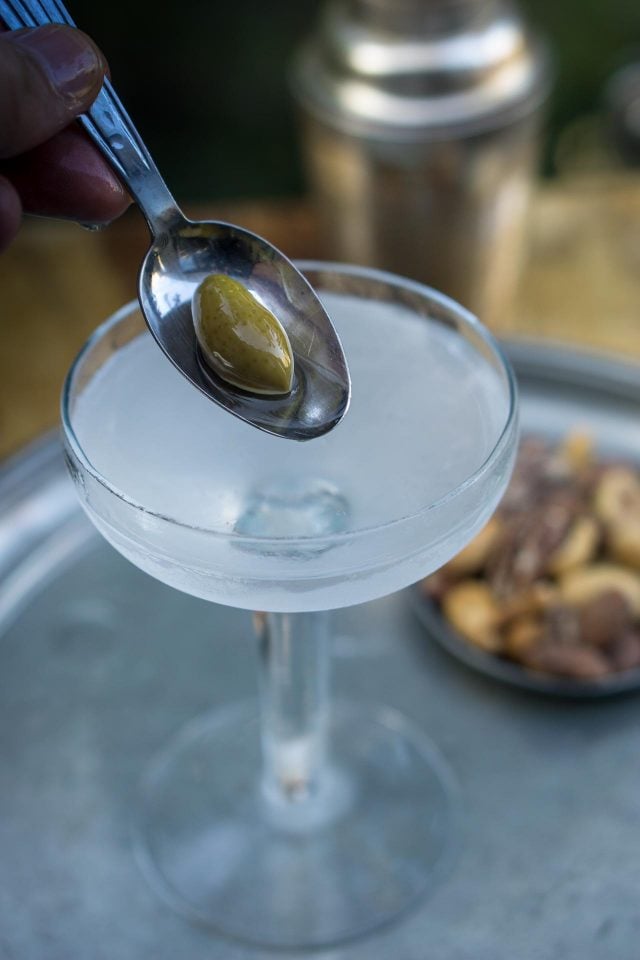 The recipe uses Gordon’s London dry gin and Dolin French vermouth, which is very good in this particular martini. It has a clean flavor, and its alpine botanicals play well with gin. (You can read more about their vermouth, and my visit to their distillery in the alps, in Drinking French.) You can use an olive, lemon twist or even a cocktail onion as a garnish. And you’re welcome to call it what you want, but I’ll continue to call the martini – whether shaken or stirred – one of my favorite cocktails. 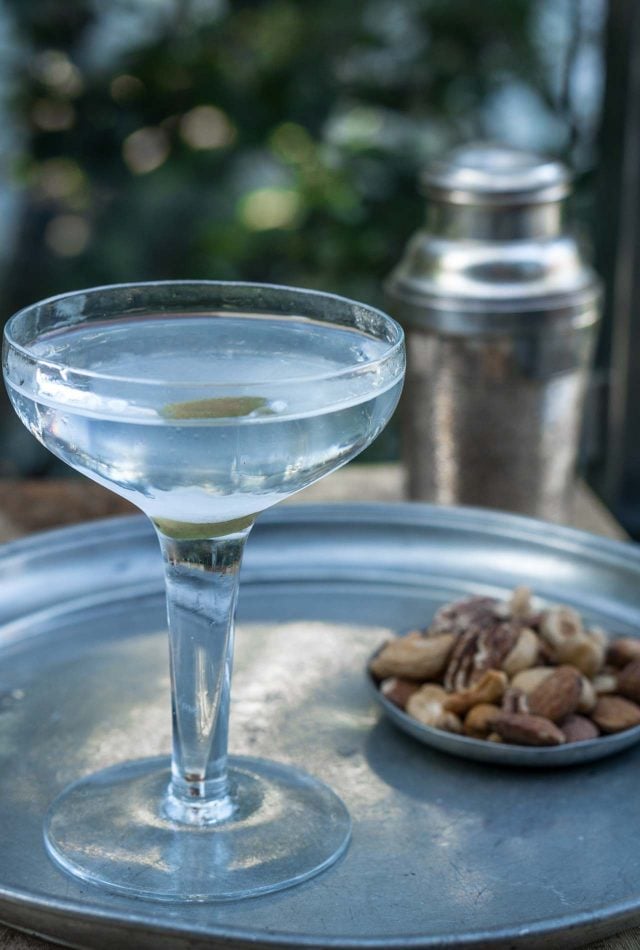 Adapted from The Martini Cocktail: A Meditation On the World's Greatest Drink, with Recipes by Robert Simonson.  While the recommended gin is Gordon's in the original recipe, you can use any type of London dry gin. This makes one substantial size cocktail, so you may want to divide it into two chilled glasses. This martini is shaken to make it as cold as possible. If you favor a stirred martini, be my guest...
3 1/2 ounces London dry gin (see headnote)
1/2 ounce dry vermouth, preferably Dolin
1 green olive, cocktail onion, or lemon twist, for garnish
1. Add the gin and vermouth to a cocktail shaker.
2. Fill the shaker with ice and shake vigorously until well-chilled, about 15 seconds. Strain into a chilled cocktail glass and garnish with an olive, onion, or lemon twist. 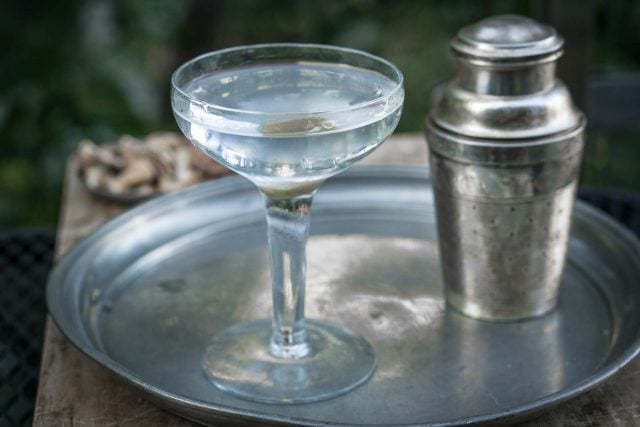 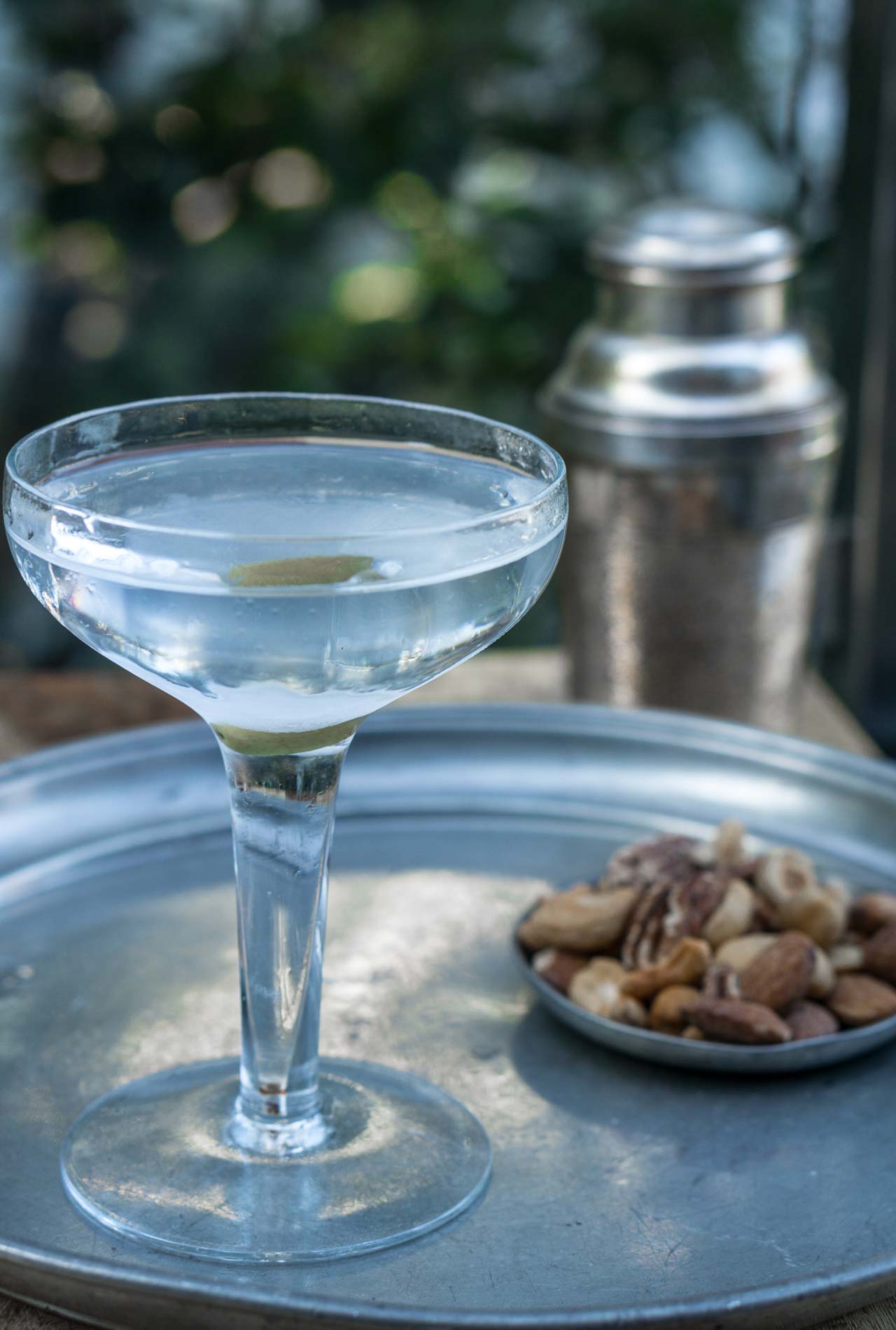