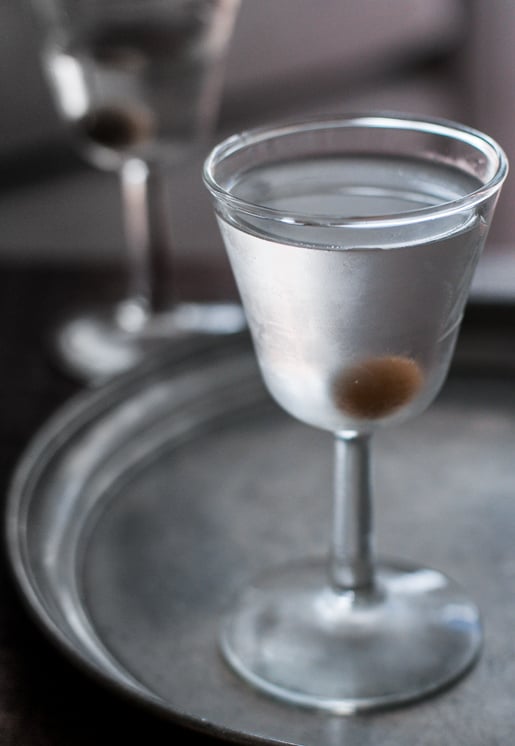 A number of decades ago, I was lured away from gin by other liquors; namely whiskey, bourbon, and other non-clear libations. There were no martinis and no gin and tonics in my cocktail repertoire. Back in the day, I used to go out and have 3 or 4 martinis, and have a good time. Sometimes, someone at work would bring a bottle of Bombay Sapphire gin and we’d sit around the kitchen after our shifts ended, drinking cold martinis and eating leftover food from the evening service. (Actually, the line cooks only drank. After being around sugar, eggs, and butter all day, we pastry people gorged on anything that had vinegar, meat, or salt in it with our drinks.) 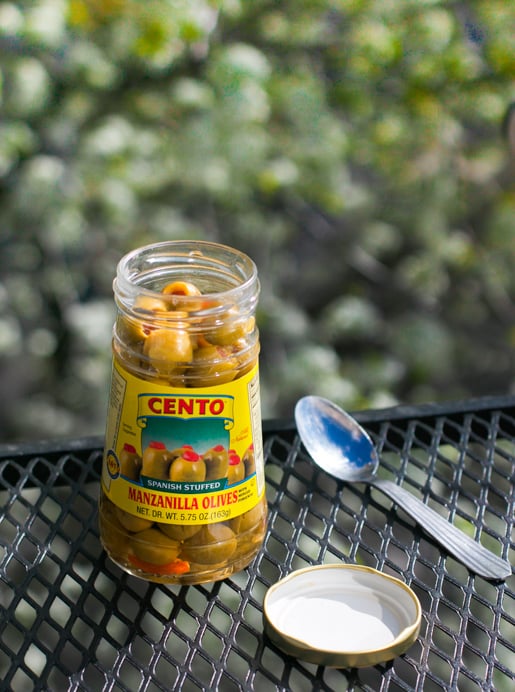 Other nights we’d go to places like the wacky Persian Aub Zam Zam where the owner would kick anybody out who: 1) Ordered anything other than a gin martini, and 2) Wanted to sit at a table. He thought, rightly, that you should only drink at the bar – and seated. To this day, I refuse to drink a cocktail standing up, and do whatever I can to sit at a bar when enjoying a cocktail. There was also a place in San Francisco called Bix, where martini glasses were upturned on a big silver tub of crushed ice, ready and waiting to be filled with ice-cold martinis that we liked as well. 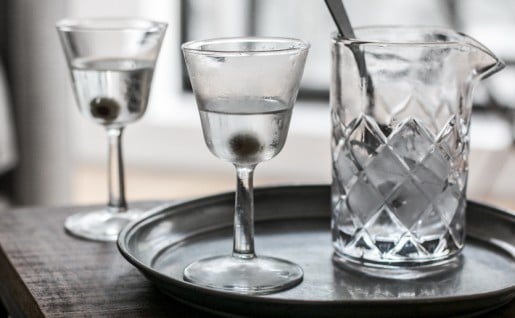 I don’t remember exactly when I stopped drinking martinis but I do remember someone telling me that you shouldn’t drink gin if you ever plan on having plastic surgery because it does something to your skin. I know it sounds crazy, (that gin affects your skin, not that I would want to have plastic surgery…although I reserve the right to change my mind in the future) but that may have been a factor all the same. Another was that I started feeling not-so-great, and completely dehydrated, in the middle of the night after a couple of martinis – which is why I don’t drink much red wine anymore, because it has the same effect.

Yet like the corned beef on rye sandwich I demolished after eight years of being a vegetarian, the gin came a callin’ into my psyche, and when I was at the supermarket recently, I had a Proustian moment looking at a jar of pimento-stuffed green olives and decided I needed to bring them home. And a couple of them needed to be at the bottom of a martini, as in, immediately. 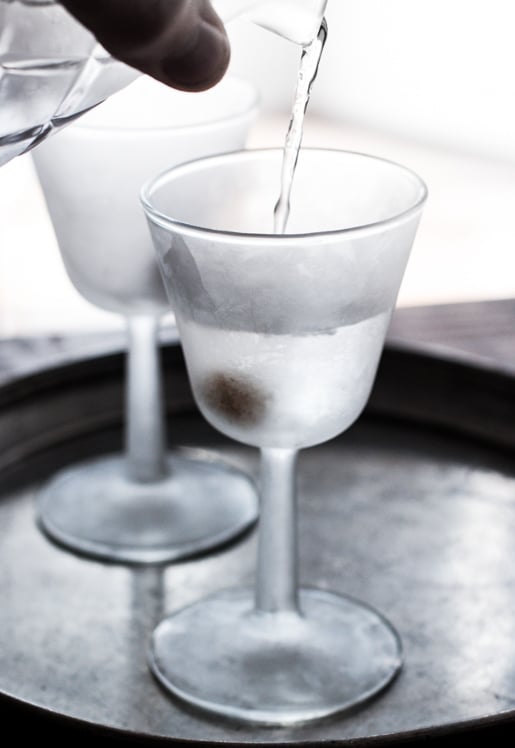 More than any other cocktail, the glass is important for martinis. As you can see, I didn’t use a classic martini glass this time around. I found these glasses at a thrift store, which reminded me of a cocktail you might get at a motel bar that didn’t have any pretensions. They also reminded me of Casa Orinda, where we often went for our Chez Panisse downstairs staff Christmas meals…until a famed, legendary, and late – and grouchy – columnist for the San Francisco Chronicle, made fun of us for going out for fried chicken (and excellent inexpensive martinis) for our year-end fête. 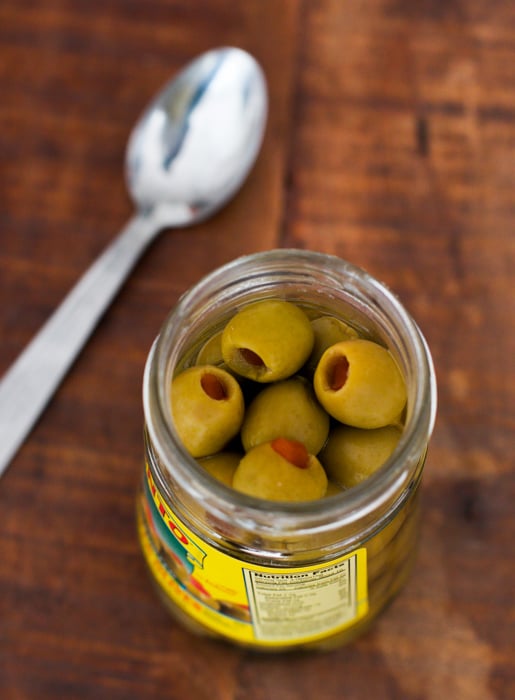 You could get all fancy with artisan olives and so forth. Or – you could do them with the classic Spanish olive. I was tempted to drop in one of the giant caper berries that I got in Sicily, since they told me when I was there that it was very trendy to put them in martinis in certain places. But since I don’t do trendy very well, as much as I like them, I went with good ol’ pimento-stuffed olives. 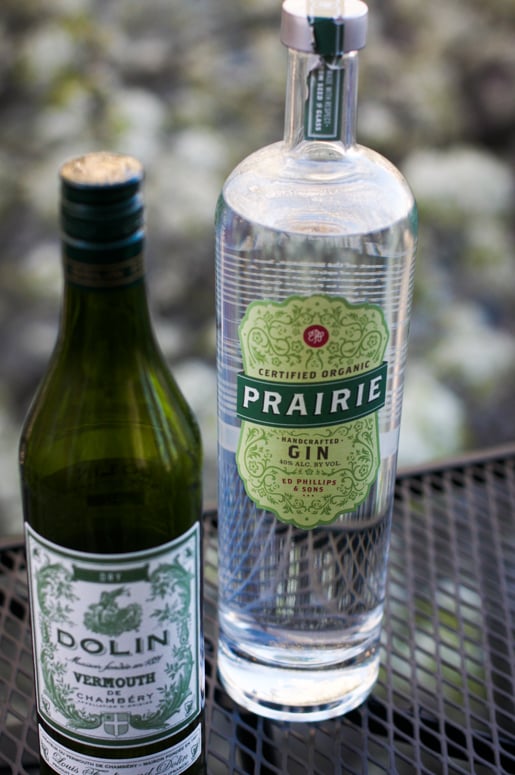 I did, however, choose the brand of gin because 1) It was organic – which makes me kind of trendy, and 2) It was a brand I’d never heard of before. Gin has a lot of flavor. Some like gins that are very juniper-heavy and others go for the cheap stuff. Don’t knock it; I’ve had martinis that worked their magic, made from non-fancy gin.

Since it’s your cocktail, and you’re an adult – well, I hope so if you’re drinking cocktails — you can do whatever you want. Just be sure that it’s icy, icy cold. It’s widely believed that a few drops of orange bitters were part of the original martini and if you haven’t tried it, it’s worth giving it a shot – or a drop or two. 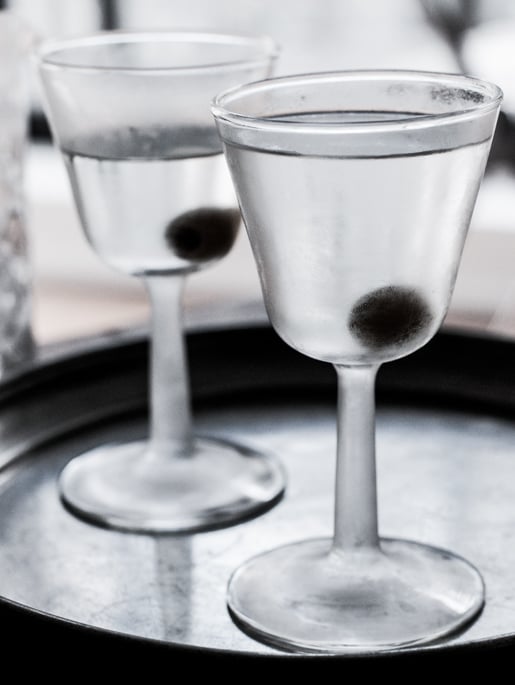 A popular way to make martinis back in the day was to add as little vermouth as possible, and people would make grand gestures, like putting some vermouth in the glass and shaking it out, accompanied by a lot of drama. Others would say something like “Just put the bottle of vermouth near the gin. That’s enough!” Well, it’s not. That’s not a martini. Vermouth should certainly be present, but slyly. Some people shake martinis, which yields a cocktail with teensy bits of ice floating on top, that’s extra-cold. I like them that way, too, although some purists insist that gin should never be shaken as it “bruises” it. Be sure to have your glasses well-chilled. Either put them in the freezer about an hour before you mix the drinking, or fill them with ice and add enough water to fill the glass. Pour out the ice water and vigorously shake out the excess water before pouring in the martini mixture.
5 ounces gin
1 ounce dry vermouth
2 olives
optional: a dash or two of orange bitters
1. Fill a small pitcher or cocktail shaker about halfway with ice. Add the gin, vermouth, and orange bitters, if using. Stir the mixture leisurely for at least 45 seconds, or until it’s very cold.
2. Put an olive into each chilled glass and strain the martini mixture into the two glasses.