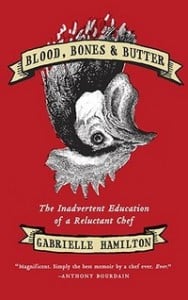 I started reading Blood, Bones & Butter, not quite knowing what to expect. Gabrielle Hamilton is the chef of Prune restaurant in New York City and for those who haven’t been, it’s a rather modest little place that aspires (and succeeds) in doing nothing more than serving very good food, simply prepared, in a friendly space.

Hamilton is a very good writer, but I wasn’t sure if her story would be anything that I could relate to. Was it going to be a nasty retelling of events in her past? Were we going to learn her philosophy of cooking? Was she writing to settle some old scores? Thankfully it was not really any of those, although they’re woven into her story as she reveals some things in her life (and hides a few) that made her who she is today.

It’s hard to write a memoir and be honest, while at the same time, not alienating readers. For example, people think that living in Paris means sitting around in cafés all day eating croissants and macarons, and someone has to show them otherwise ; ) Life isn’t always rosy and showing your flaws, and pointing out a few in others, is just part of reality. One doesn’t need to dwell on them – and Hamilton certainly doesn’t – but she does include a number of incidents that manage to convey to us “the inadvertent education of a reluctant chef”, which is the apt subtitle of this book.

To say that Hamilton had a off-beat life is putting it mildly. Her mother was French, and she grew up in a rural community in America. Her father was absent much of her life, and she drifted away from her mother as her life progressed and she worked in various restaurants to scrape by, often participating in illegal activities (and not just the usual “let’s smoke a joint behind the walk-in refrigerator” kind of thing). She traveled, never setting down roots anywhere until she reached New York City.

Eventually she settled down with an Italian husband and two kids, after several relationships with other women that didn’t quite pan out, and is now the owner of her own restaurant on a minor side street in Manhattan that took me a little while to find on my first visit. She never went to culinary school, instead learning from other cooks willing to spend time with her, including several seasons cooking at summer camps, and traveling on the cheap through Europe and cooking for extra cash in places like France and in the Mediterranean. But not the fabled “sun-drenched” cuisine you see in books, where everything is plated up on pretty Provençal plates. She lived above smoky bars and in fields where ingredients (like wild herbs) were gathered alongside the footpath on the way to work. Which, to me, sounds like a pretty good eduction.

I was surprised to find myself reading the book cover-to-cover; I was fixated on her story, which twists and turns in directions that run the gamut from petty thievery to shopping from a toothless vegetable dealer in Italy during her annual summer jaunts to visit the in-laws, which were both challenging and part of her growth in terms of confidence, and finding her place as a cook and unexpected one as a matriarch.

I was particularly interested in chapter 16, when she is asked to speak at a culinary school on the subject of women in professional kitchens. The first question she gets from a woman in the audience is “Is it okay to cry?” Whenever I see this subject come up, I always think – “Are we still discussing this?” as well.

As someone who has spent nearly three decades in restaurant kitchens, working alongside women, working at women-owned businesses, and working under women chefs, I have to agree when Hamilton says earlier in the chapter “..I can’t understand for one second what the difference is between a male chef and a female chef-the food has to be cooked and we all cook it.”

In spite of the glamorization of restaurant work, it’s terribly grueling and I’ve worked with loud, crazy, strung-out, sexist, quiet, stressed, hilarious, vindictive, no-limits kinds of folks and everyone in the kitchen and dining room just collectively grunts and groans together to get the food out, sometimes fueled by testosterone, alcohol, anxiety, estrogen, rage, medication, adrenalin, all while wielding sharp objects. I’ve seen the same kinds of things that Hamilton recounts in her book and appreciated her brutal honesty in talking about them without the sheen of being edited for television in palatable bites. But the camaraderie and exhilaration at the end of your shift, when you’ve all cleaned up your stations and the last customer has left and you laugh about it together over a bottle of wine, makes it all worthwhile.

She also laments when another panelists goes on to give a speech about how the aspiring (women) chefs in the audience should feel the connections between the farms and the earth, when Hamilton knows that in all likelihood, a majority of the them will get out of school and be working in kitchens doing lowly tasks like peeling onions and cleaning the sink for minimum wage.

This book is full of stark honesty. Getting arrested 11 times. (Take that you bad-boy male chefs…) Surviving an unfulfilling marriage while trying to run a restaurant with $2 million dollars in sales a year. Jumping in to the egg station for Sunday brunch at the restaurant when 39 weeks pregnant. Cleaning up piles of – well, I’ll let you guess – left by bums outside the restaurant. And dealing with condo neighbors coming in during the height of the Sunday brunch rush when people start lining up an hour in advance and they’re racing through to feed two hundred people in a place that seats around thirty-five people, and wanting to discuss the electric bill with her. All I can say is that she’s a stronger person, man or woman, than I am if those things didn’t make her cry.

Readers might miss having recipes in this book, and at times I did, too. Which is something I’m sure would make Gabrielle Hamilton roll her eyes. But it’s not because I want to race to the kitchen to make anything, but recipes are often part of the story of cooks and chefs and that’s how we express ourselves. So I hope that there’s a cookbook in her future, which will tell more of her story.

Blood, Bones & Butter is a no-holds-barred book, using profanity in everyday conversations (like people in restaurants use) and chronicling what really makes a person become a chef and restaurant owner. There’s a few unanswered questions, but like meal at Prune – when you’re done, you’re not overstuffed, just satisfied.