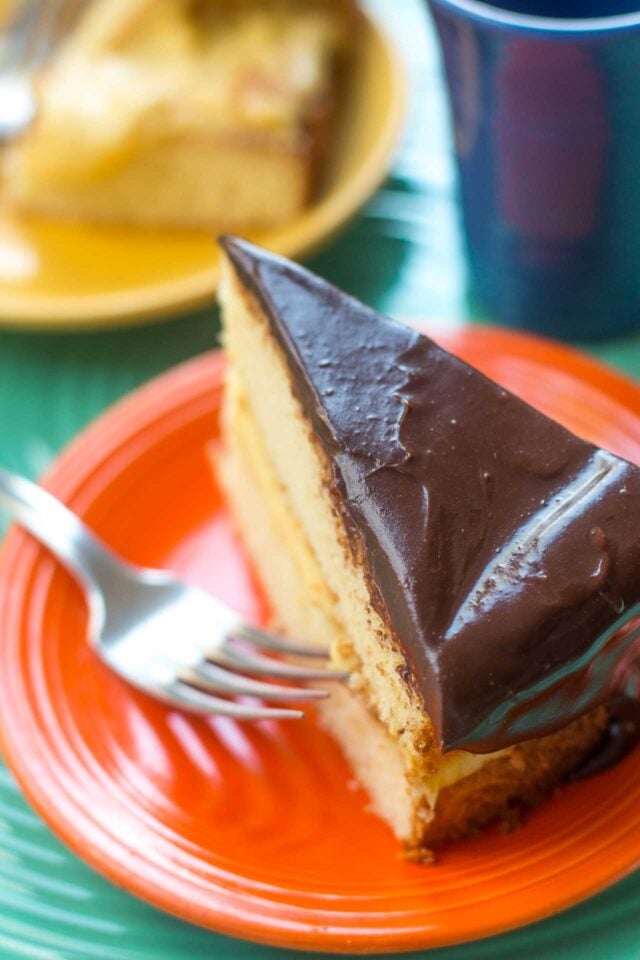 Boston Cream Pie is one of my favorite desserts of all time. It was one of the options in the cafeteria line at my elementary school and the one I always grabbed and put on my tray, next to my codfish sticks, boiled potatoes with parsley, and butter sandwiches on dense Pepperidge Farm-style white bread, which they served in half-portions, each rectangle slipped into a brown waxed bag. (The other option was peanut butter.)

I still remember finishing lunch and diving in with my fork to that wedge of golden sponge cake filled with rich, vanilla custard. In a world that seems hopelessly in favor of milk chocolate (which I’ve come to appreciate), there was a deep-dark chocolate glaze on top, which may have been my first taste of bittersweet chocolate. And one I never forgot. 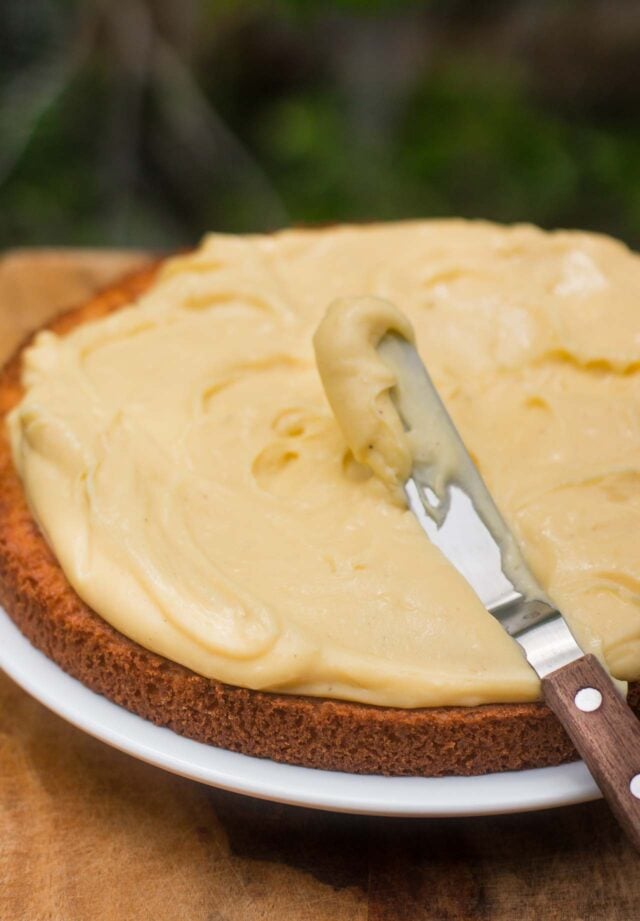 We’re all familiar with the folks who insist that food remains “traditional.” From Cacio e Pepe to Caesar Salad, some want to keep everything as original as possible. (And some don’t.) The original Boston Cream Pie didn’t have chocolate glaze on it but was dusted with powdered sugar. So if you’re a traditionalist, I beg your forgiveness for using chocolate glaze here. That’s part of what I remember so fondly about Boston Cream Pie and I can’t imagine just dusting the top with powdered sugar and calling it a day. I want my chocolate.

I grew up eating Boston Cream Pie but don’t think I ever made one. It wasn’t really a dessert that jibed with the farm-to-table movement that swept across the U.S. in the 80s and 90s, and nostalgic American desserts didn’t always fit into that narrative. (Unless, I guess, it was made with bean-to-bar chocolate, pastured butter, repurposed parchment paper, and heritage flour.) The pie I remembered was yellow, moist, and had a glaze that cracked a little when you stuck your fork in it, having lost a little moisture from being glazed in advance and left to dry. Similar to Black & White Cookies; part of their appeal is the sugary icing that breaks into crunchy fissures when you bite into it. Creamy ganache can be a little new-fangled for us native New Englanders. 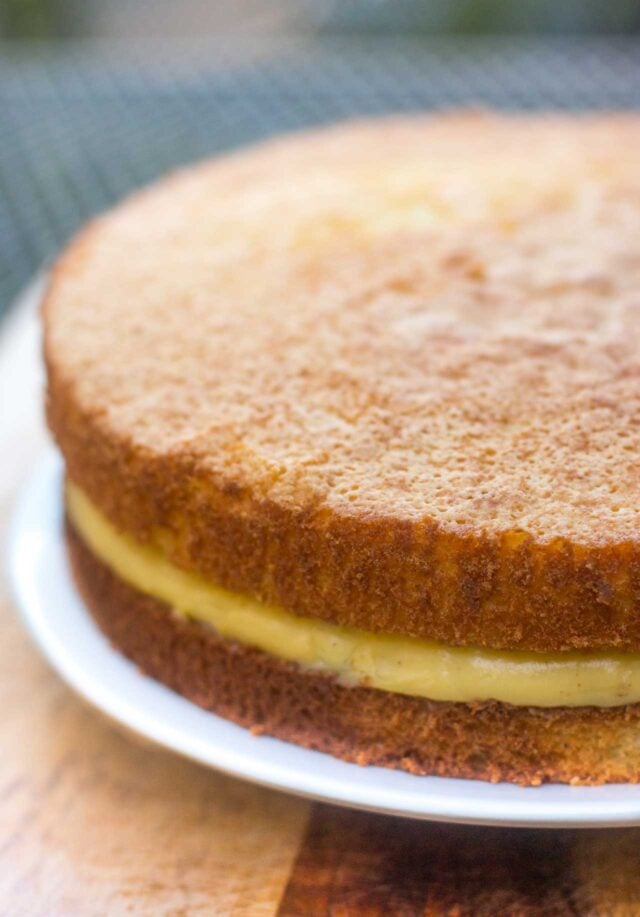 So I went to work on my own version of Boston Cream Pie, but couldn’t get it to what I remembered. I played around with the sponge cake recipe I’ve always used, which is from my book, Ready for Dessert, and was given to me by the late food and wine writer Shirley Sarvis decades ago. 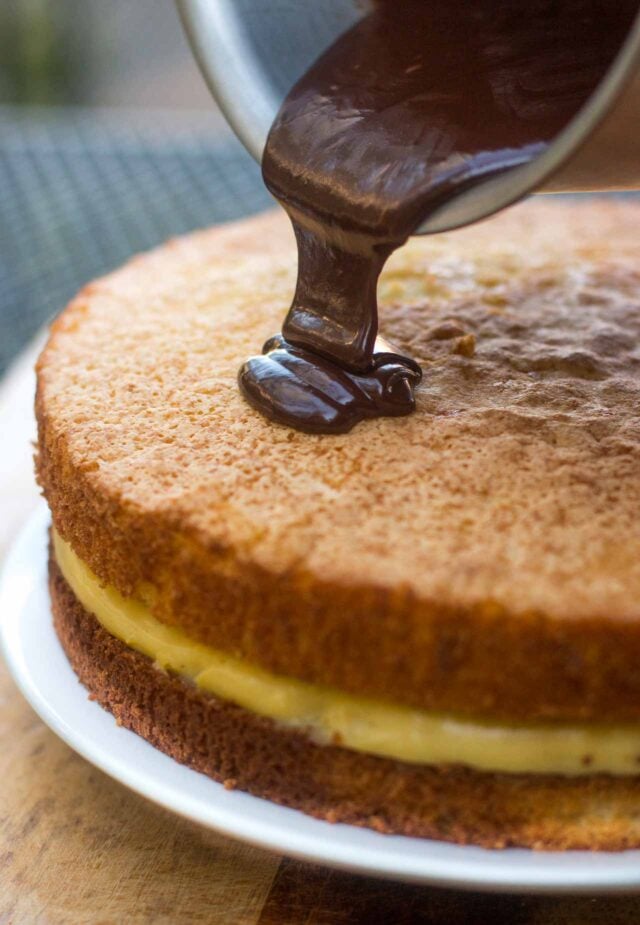 Shirley was prim and proper, as in, the kind of person who might wear white gloves and you’d assume might have a wee nip of sherry before dinner. But she was an accomplished wine writer, and Shirley always had a pleasant, smiling demeanor as well as a degree in home economics. One day she handed me a meticulously typewritten recipe on a piece of paper, and when I read the recipe, I asked her why she added water to the cake. She replied with a cheery smile, “For moisture, of course!” which seemed reasonable to me.

So I made a Boston Cream Pie using that sponge cake recipe as a base, which is wonderfully moist and lofty. But times have changed and it used a few too many bowls for us modern “on the go” types. And that was just for one component of the cake. The cake also sports a custard and a glaze, so to avoid too many dishes and pots and pans, I kept cooking and looking. 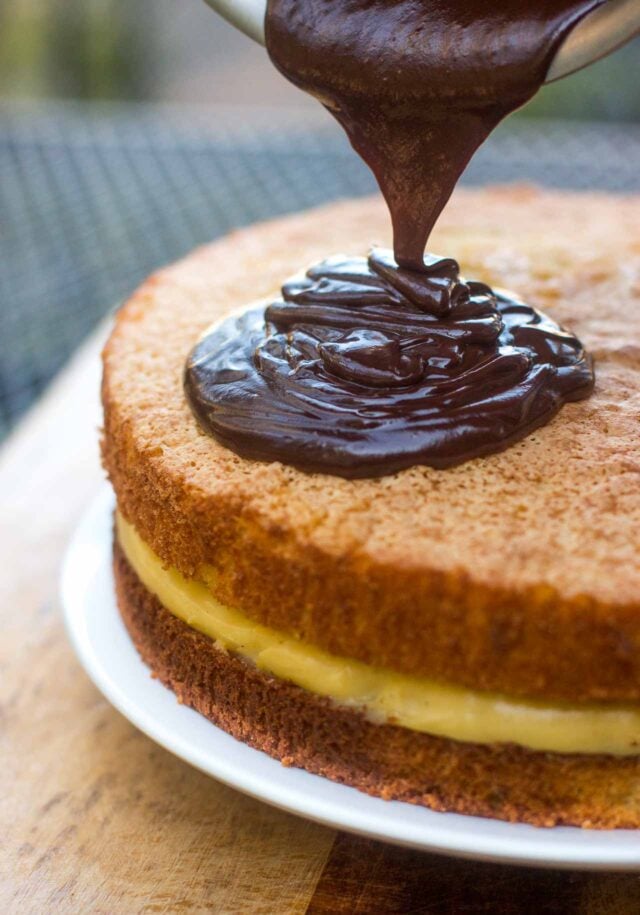 I checked out a book that has fallen under the radar since its publication in 2001: Classic Home Desserts by Richard Sax. Richard was a meticulous baker and curated a wonderful collection of recipes that was the classic baking book for years. He was a beloved figure in the food and baking community, which has changed in some ways since then (it was pre-social media), but he sadly passed away way too young from AIDS. (If only we’d had a vaccine back then, or the medical knowledge we have today, I think about how many lives might have been saved.)

Both Shirley and Richard had their personal struggles, but my public one was successfully making the Boston Cream Pie of my youth. A few people who followed my quest on social media noted that perhaps what I remember came from a boxed mix, which is possible. 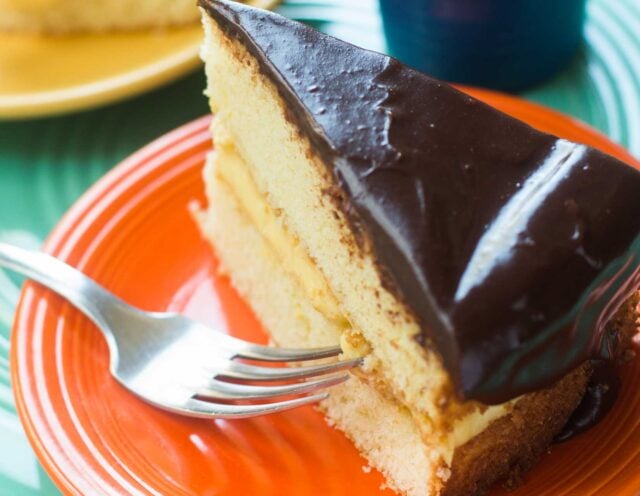 Like most cooks and bakers, I’m inspired by others. And I’m also tenacious, but after three tries (and since this recipe has three components, meant I made nine recipes before landing here), I was ready to admit defeat coming up with my own version of the classic. Yes, I have sponge cake, pastry cream, and ganache recipes in my repertoire, but I leaned on Cook’s Illustrated to get to where I wanted to be. I recast theirs and toggled some of the ingredients, and kept others intact but want to give them props for doing the work of putting everything together so well. After my fourth cake, or pie, here ya’ go.

Adapted from Cook's Illustrated.Do plan accordingly when making this. The custard filling should be made the day before and the cake slices better when the filling has had time to firm up, which will take a few hours in the refrigerator. Don't be alarmed when you add the hot milk to the whipped eggs, and the mixture deflates somewhat. It's perfectly normal and the cake will still rise nicely in the oven.When used in a recipe, a FAQ comes up as to what can be used in place of the small amount of corn syrup. It's what gives the glaze its glossy shine. You could use another liquid sweetener with a similar thickness and texture, such as Golden syrup, glucose, rice or sorghum syrup. (Skip the honey, though, whose taste isn't compatible with this cake.) If you diverge from the recipe, the texture may be thinner. If it's too thin, add a little more chocolate. You can read more about the role of corn syrup here and how to use alternative sweeteners. Check here for desserts that use leftover egg whites.
Course Dessert
Servings 10 servings

For the custard filling

To finish the cake