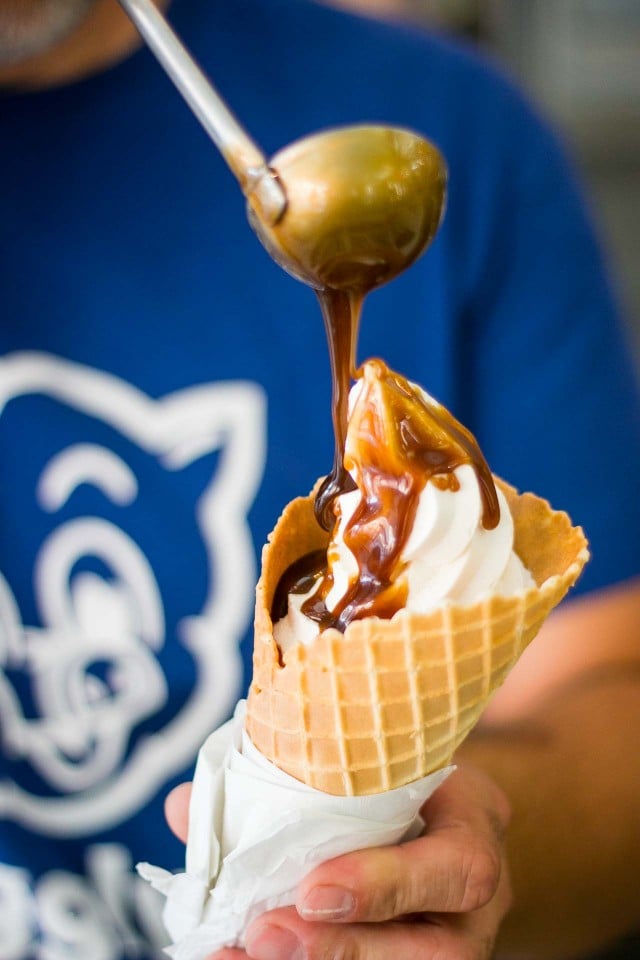 I don’t like cliques (unless I’m part of it, of course…) and I have to say, one that I’m happy to be a part of is the brotherhood, and sisterhood, of ice cream makers. I wasn’t the first person to write a book, The Perfect Scoop, about making ice cream. But it landed on the cusp of something that was happening: People were rediscovering ice cream. I’ve always dreamed of opening an ice cream shop. And while that ship has probably passed, I’m so happy to see that a lot of people have done so, and quite successfully, I might add.

When I first met Doug Quint, he was manning an ice cream truck next to Union Square in Manhattan. Even though another ship has passed – namely, I’ve gotten older – like a couple of millennials, we had chatted via social media and I thought it’d be fun to meet. When I arrived, the line stretched halfway down the block. And in Manhattan, that’s a city block between two avenues, which is huge, mind you. I waited 20 minutes and barely moved.

Because I have zero patience, twenty minutes to me is an eternity and hopefully you’re never stuck next to me on an airplane, because things get a little weird in my row after that twenty-minute mark. So I decided to head back another time. However I could not leave without saying hi and took a moment to knock on the back window of the truck, where Doug was swamped, scooping and saucing like a madman. 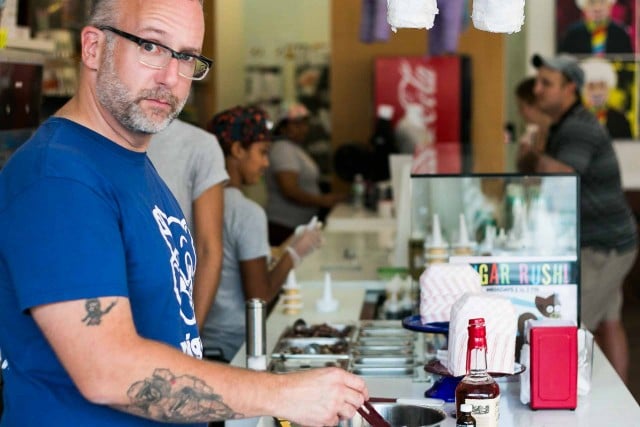 He leaned out and gave me a big hug, and told me to meet him at the shop that he and Bryan Petroff they were just finishing and he gave me a massive slap across the face. I figured that was the initiation to the brotherhood (or sisterhood) of ice cream makers. So if you want to know how you can join, plan to have some painkillers nearby. It was the slap that was heard around the world and now Doug and Bryan no longer roll around in their ice cream truck, but instead are swirling it up in one of their unicorn and rainbow-filled Big Gay Ice Cream shops in New York City, with another in Philadelphia, and more planned in other cities to spread the word of superior soft-serve ice cream. Yes, those fiery preachers were right: These guys are out to recruit! 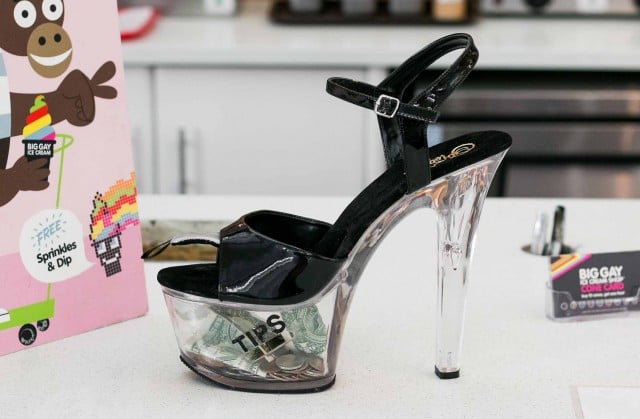 After the swelling had gone down, I realized my initiation – or perhaps hazing – was complete. And I was happy to visit the store now that it’s open, and thriving. I spent an afternoon behind the counter with Doug, who got his master’s degree from Julliard music school as a bassoonist, and people of all ilks came in: gangs of teenagers after school, businessmen in grey suits, moms with kids in strollers, tourist couples with cameras around their necks, some guy who looked like a famous movie producer, and a few other assorted New York characters. 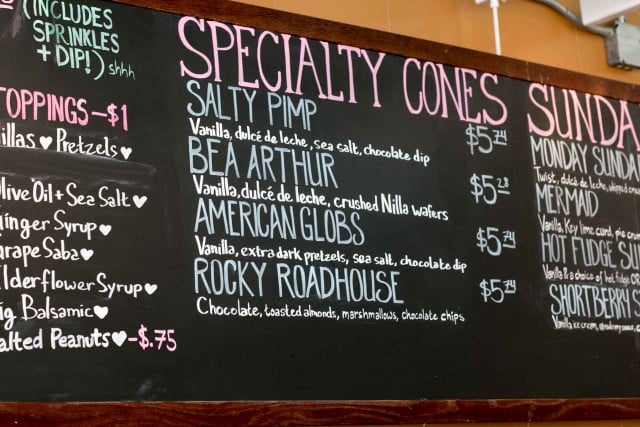 Bryan and Doug just came out with their first book, Big Gay Ice Cream. It’s not just a recipe book (as Doug, jokingly – I think, told me, “We just took all your recipes, and used ’em…”) but a fun-filled romp high, written like a high school yearbook, the kind we all wish we had, instead of the ones we ended up with. There’s no talk of hazing in the book, although I did lend a quote for it. As did notables like Rachael Ray, Anthony Bourdain, Anne Burrell (who was at the opening party for the book, as was I, where I was truly astounded by her gravity-defying hair in person – you go girl!), Tommy Lee, and Gail Simmons, although none of them mentioned “soft serve” and “Viagra” together, like I did. Which makes me think that that’s why I don’t have my own television show, come to think of it. 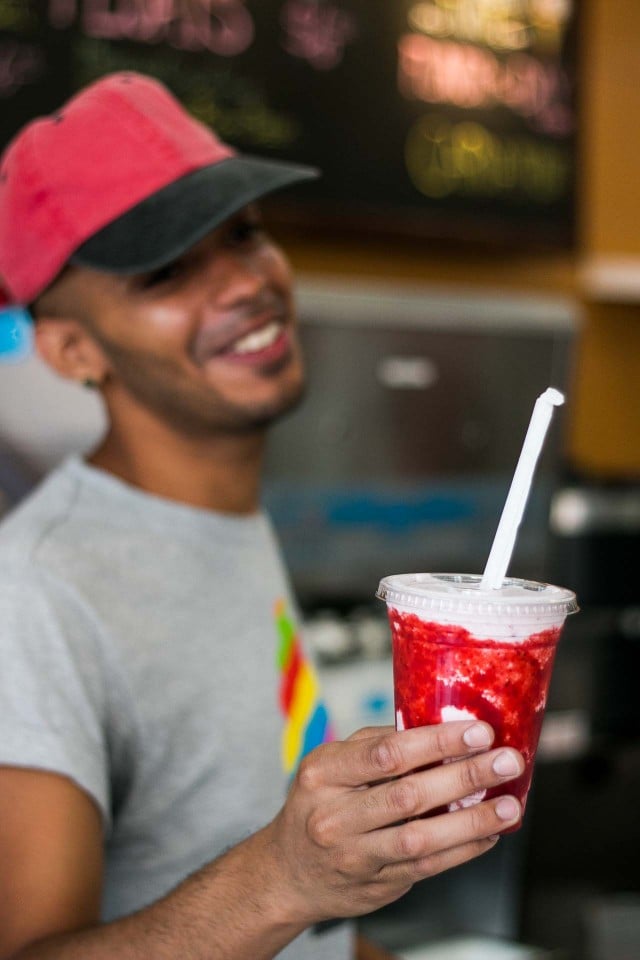 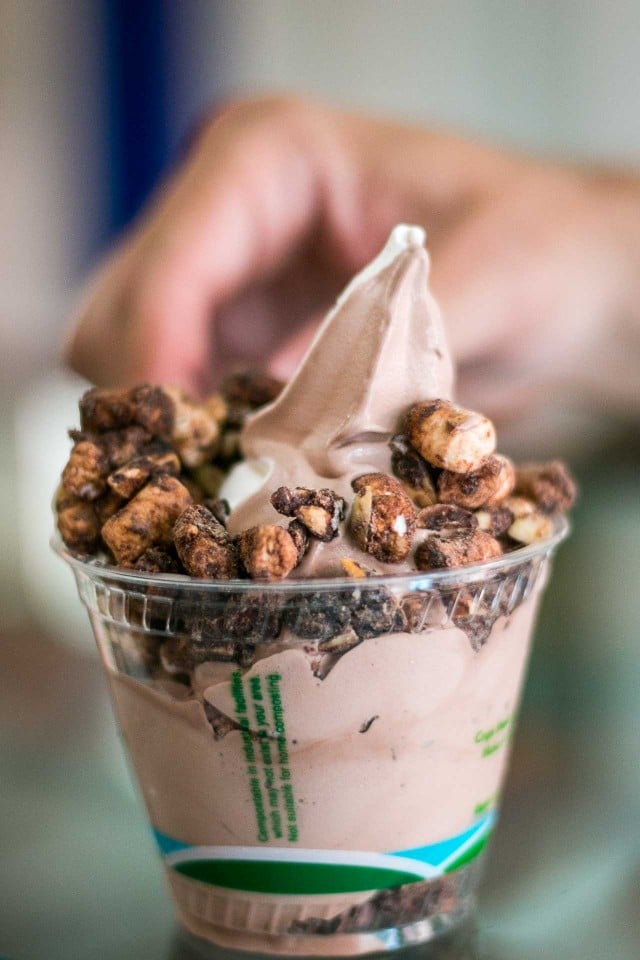 With this book, you can make a Magic Shell sauce that crackles when it hardens on top of your ice cream, with no dubious ingredients. You can learn the secrets of their famous Salty Pimp Sundae to make at home. You can whip up a batch Awesomeness Sauce with two kinds of chili powder. I wanted that Rocky Roadhouse sundae up above, but it was being handed off to a customer and didn’t think it would be polite if I grabbed it out of his hand. And I didn’t want to get slapped again by the owner. 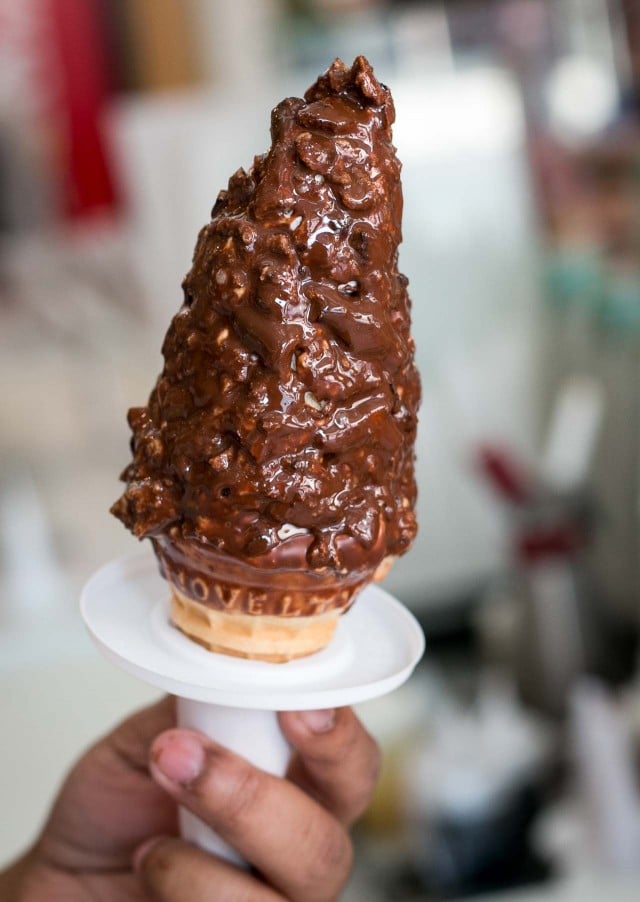 The shop uses a special dairy blend for their ice cream from Ronnybrook farms, a local organic dairy, which also supplies their heavy cream. They try to use as many high-quality products as possible, even going so far as to mix up their own special blend of rainbow sprinkles, going less-heavy on the yellow, and dialing up the other colors, until they are exactly the right proportions to ensure that each customer gets a beautiful, and well-curated, rainbow of happiness with each cone.

This bourbon butterscotch sauce is one of their most popular toppings. And it’s easy to see why. It contains two of my favorite ingredients: butterscotch and bourbon, melded together in one creamy-rich sauce, spiked with a big hit of bourbon. It’s thick enough to be the perfect, sweet-boozy topping for a scoop – or swirl – of your favorite ice cream. 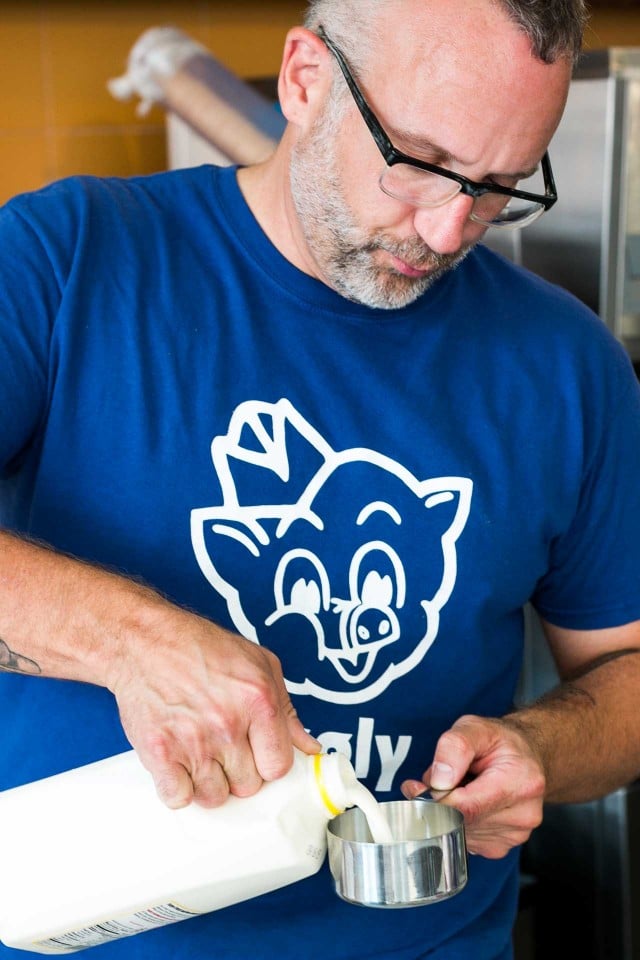 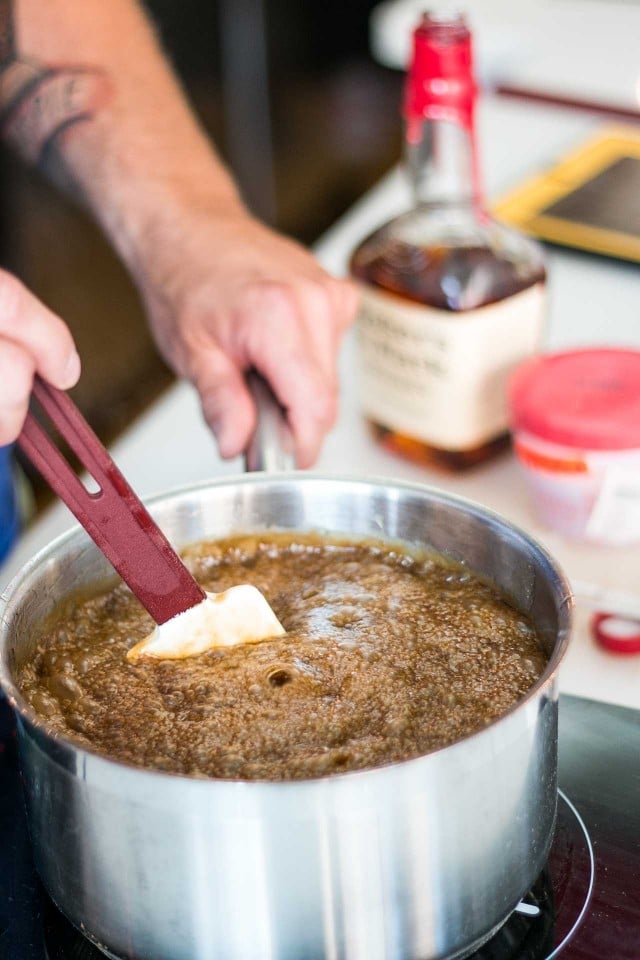 To make it at home, if you don’t have magic unicorns looking out for you, it’s important to use a very large pot to make this. Doug perhaps trusts in the magic of his unicorns and used a regular large saucepan for the sauce, that bubbled up furiously to the top, but settled down after a bit and didn’t overflow. Because this pro knew exactly how high it would go.

But to avoid spills, I’d use a Dutch oven or similar-sized pot. It makes a lot of sauce, but any extra could be jarred up and given as gifts. And next time you’re in New York City or Philadelphia, I recommend stopping in one of their shops. Bryan and Doug have made ice cream fun again, not that it ever wasn’t, but they’ve definitely taken it to another level. Which is where this sauce took me, when I had my first lick of it. 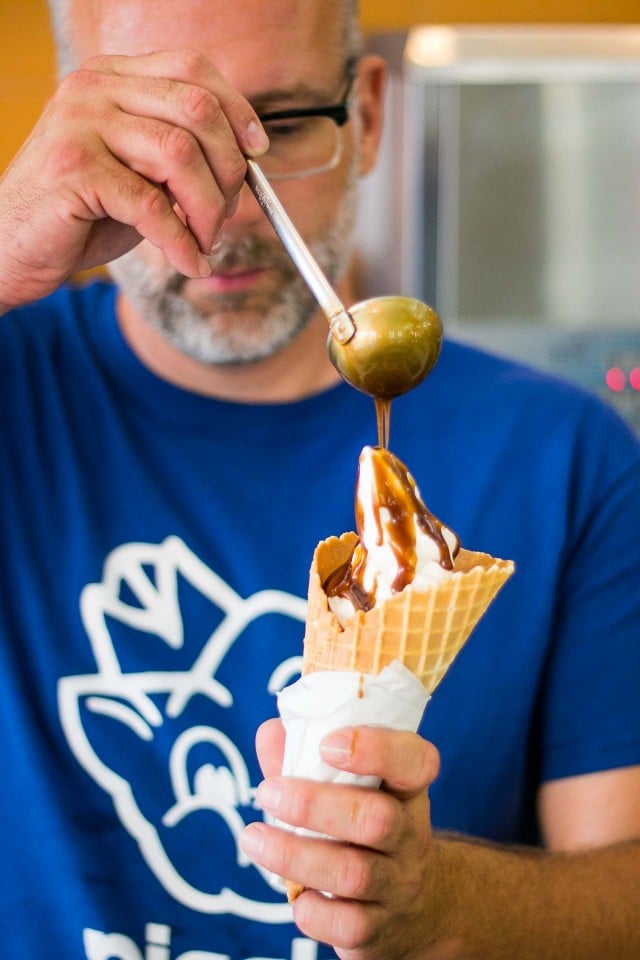 Adapted from Big Gay Ice Cream by Bryan Petroff and Doug Quint This makes a big batch of sauce. But in case you’re not running an ice cream truck, feel free to cut it in half. It’s really wonderful spooned over – well, everything. Even spooned up right out of the bowl once it’s cooled down. For those who’d like to try it with another liquor, dark rum or another favorite could take it in a different direction. For those wanting to omit the alcohol, you can add a vanilla bean split lengthwise in addition to the vanilla extract. A splash more cream (or water) might be necessary at the end, to thin it out. Sauces such as this tend to boil up, so although Doug used a large saucepan, I recommend a bigger pot, such as a Dutch oven. And watch it closely while it cooks. If it threatens to boil up and over, remove it from the heat and let it simmer down before continuing to cook it further.

Adding bourbon to very hot butterscotch may cause it to boil up so it’s best to wait until it’s cooled down a bit. And you don’t want to burn your tongue, so please be patient – although I know it’s hard. Serving and Storage: Serve warm over ice cream. The butterscotch sauce can be refrigerated for up to two weeks. Rewarm over low heat in a saucepan, stirring constantly. 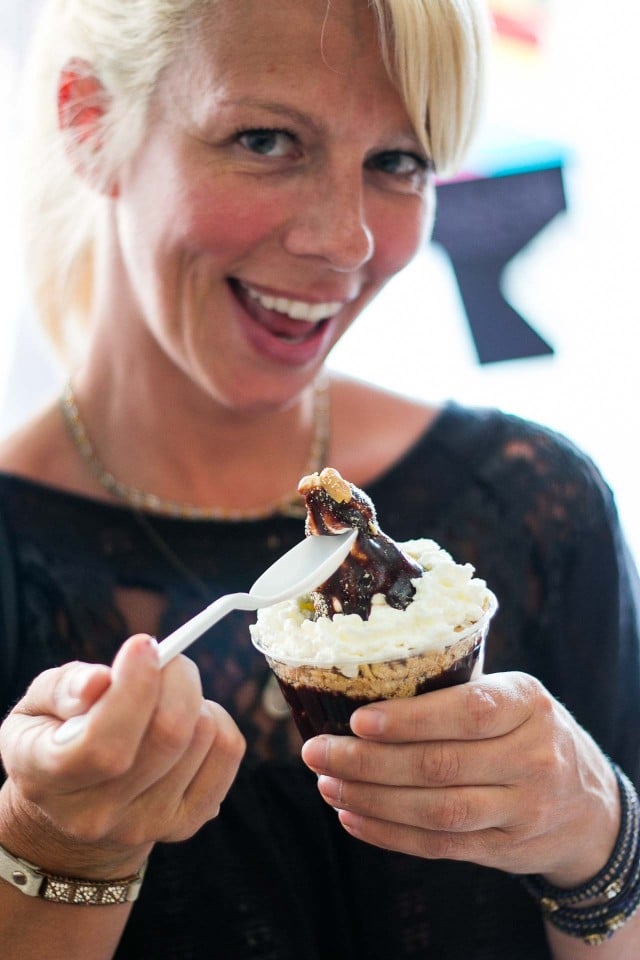