Eating Out & About in New York City 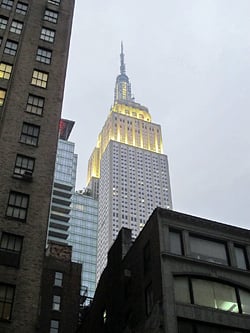 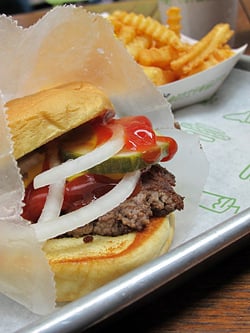 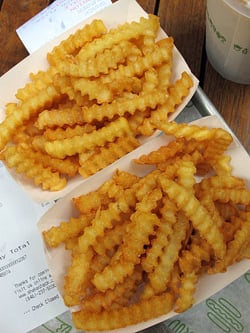 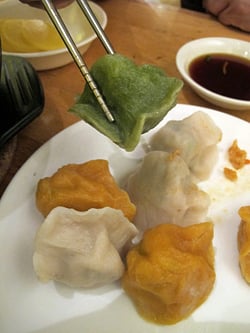 I was recently conversing with someone about what excites (and stuns) French people when they come to the United States. Supermarkets are always interesting places to go; last time I took Romain to one in Florida, he came out and said “Pas de stress!” because shopping in a French supermarket can be an exercise in frustration. (Which is putting it mildly.) 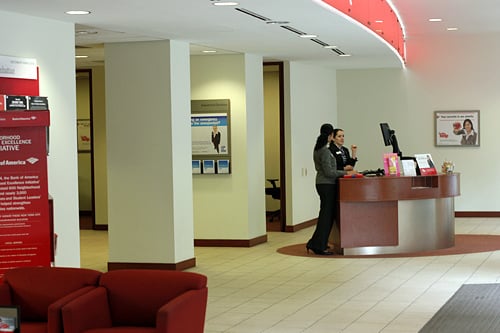 Someone suggested that I take him to a bank, because there is no place more stressful, or more unwelcoming, than a bank in France. I was recently having a discussion about how distrustful my bank seems to be of customers and a friend stunned me by saying that banks have so many rules and blockades in place because “…you shouldn’t be trusted with your own money.”

And indeed, whenever I have to go into my bank, it takes me a day or so to recover. Which is also likely why there are so many safes for sale in hardware and department stores in France. It’s no myth: the French really do know how to live.

So we went into a branch of my bank and Romain couldn’t believe the amount of space and how clean and well-lit it was. Not only that, there were a few friendly women at the door with big bowls of candy, lots of mood-inducing lights, and a couch in front of a television with some magazines, in case you wanted to relax. I didn’t show him the massage room because I was afraid he’d never leave. 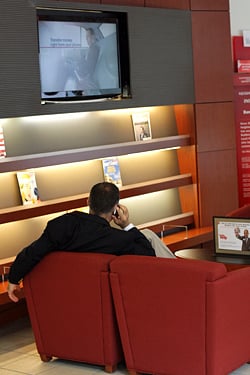 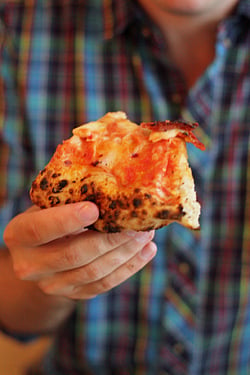 But I had a lunch date, so after we finished off our chilled flutes of Champagne, we handed the empty glasses to the teller and left, and I headed down to the East Village to Motorino to see someone else who is always welcoming when I come to New York; Adam Roberts. 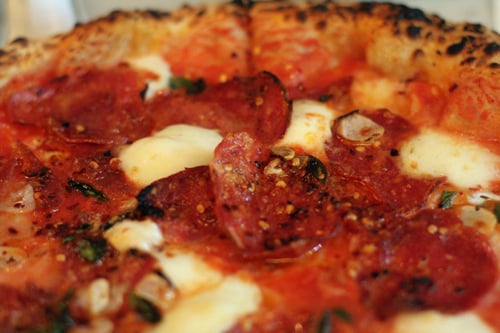 Adam recently stunned the internet by announcing his big move to Los Angeles (I didn’t tell Romain his apartment was already taken by someone else) but we split two pizzas, one was their famous pie with Brussels sprouts and pancetta, and the other was soppressata piccante, with thin rounds of spicy sausage. 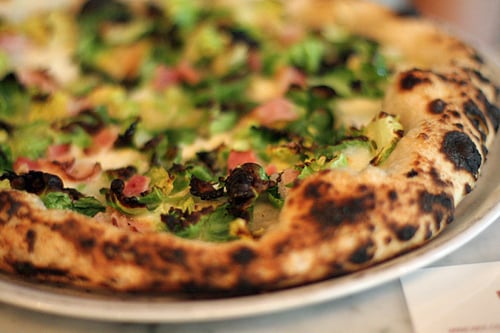 Adam wanted in silent fascination as I ate my pizza like we do in Paris, with great civility, using a knife and fork, while he devoured his pizza with his hands. But since I have a few pictures on the site of him that show him in a less-flattering light, I graciously decided not to show a picture of him shoving the pizza in his mouth, because I want to stay friends with him. 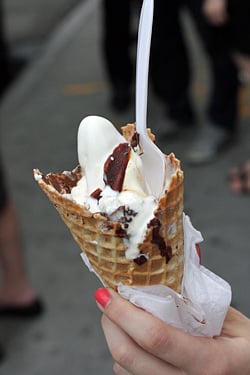 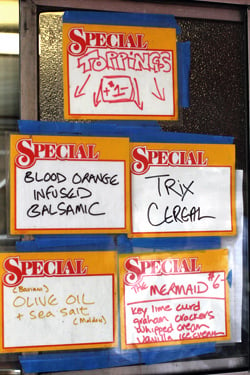 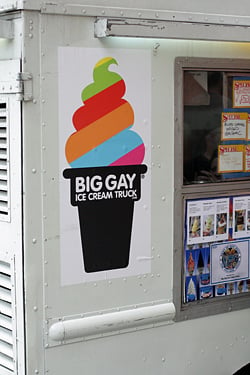 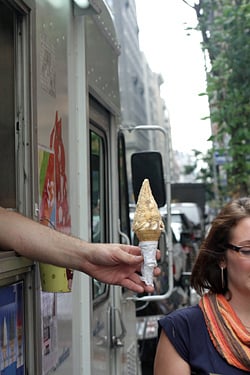 Afterward I headed to Union Square to walk it off, although actually I was in search of the Big Gay Ice Cream Truck. (People like to point out incongruous things I sometimes say on the blog, so I’ll address that one right now and say yes, ‘walking off lunch’ and ‘eating ice cream’ are two radically different things).

When I got there, I realized that I wasn’t the only one who’d heard so much about it and the line was longer than the one at my bank back in Paris…although it moved quite a bit quicker. And the fellow at the window was a lot nicer to the customers…and yes, he made change. 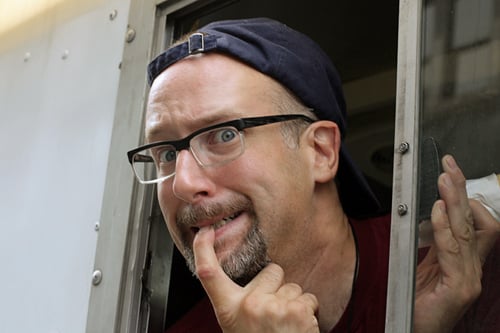 Still, after waiting a while, I decided to come back another time (which, unfortunately, I don’t have the luxury of doing with my bank…), and rapped on the window to give Doug a big hug – he’s just one of those kinda guys when you meet, you want to cozy up to him, and his cones. Which definitely explains the lines.

It’s impossible to come to America and not have burgers and fries. Although just about every café in Paris now has a hamburger or “le cheese” (the Parisian diminutive of ‘cheeseburger’) they aren’t the same. However if someone wants to start a successful business in Paris, open a hamburger stand with very good hamburgers using great beef, homemade buns, and well-cooked French fries – believe me, you’d clean up. (Although don’t ask me for helping finding a bank.)

Danny Meyer has been replicating his Shake Shack around the city and elsewhere successfully and although I had to explain to Romain why I was drinking ice cream with meat, he – and I – loved the crispy, crinkle-cut fries. 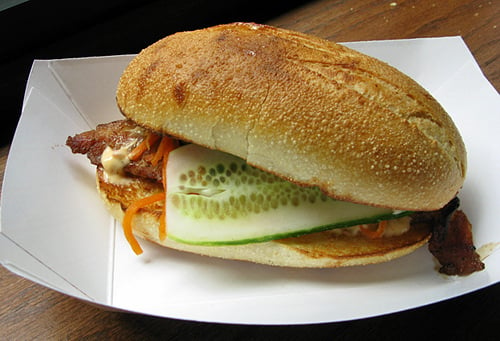 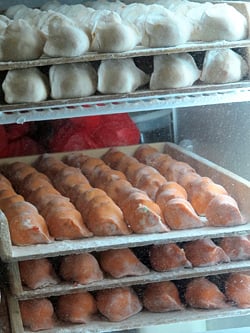 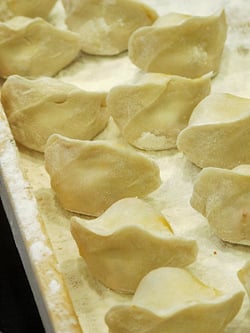 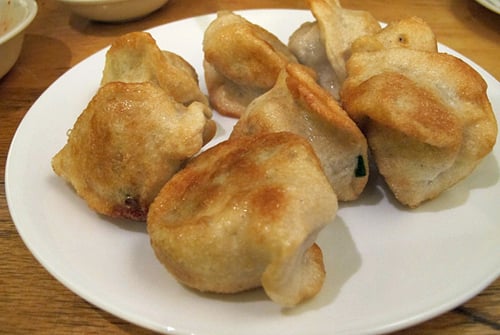 And in search of something lively and spicy, we’ve hit Mandoo (2 W. 32nd Street), a Korean dumpling bar, as well as Num Pang, a Cambodian sandwich shop which Romain liked so much, he snuck back to when I was getting my pizza-munching lesson from Adam.

This really has been a great welcome, and I’ve been having a terrific time meeting – and hopefully holding on to – old friends like Adam, catching up with scoop-endous people like Doug, plus making a couple of new friends along with way. Who obviously don’t eat as much ice cream and pizza as I do. 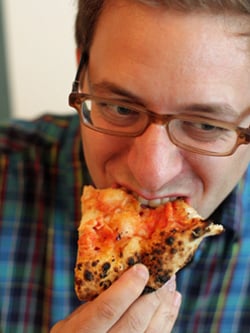 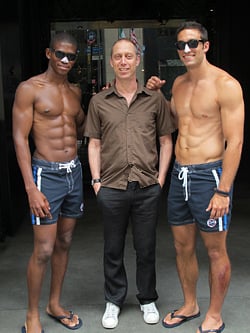 Where to Eat in New York (Amateur Gourmet)