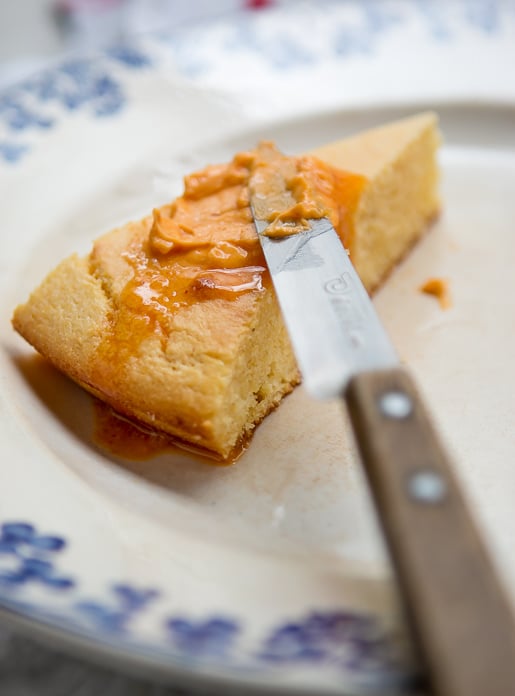 One of my friends who also has a food blog told me that she likes the posts where I cobble together ingredients in Paris to make something American. After spending countless hours roaming the city in search of this and that, it’s something that is actually fun for me to do, too. I like nothing better than prowling around and discovering ethnic épiceries (often around Belleville and the Marché d’Aligre), where I always come home with a variety of curiosities, in addition to what I was originally looking for. Some are still in the back of my cabinets, like still-sealed coconut concentrate from Vietnam (which looks similar to molasses, and probably tastes amazing), and the bag of Fritos, which an American friend who was staying in my apartment spied, and threatened to open – and eat. But didn’t

Four years later – yup, the coconut concentrate is still in my baking cabinet, and the Fritos are still uneaten, along with a bag mahlab, the fragrant kernels of Mediterranean cherry pits, a dried-out stalk of candied angelica, which I had to buy since I searched far and wide for fresh angelica in France (even in the region where candied angelica is made) and no one knew where – or what – fresh angelica was (thus ending my ability to spin a story, and a recipe, out of that one). I have a tin sack of سبع بهارات, a Lebanese blend of seven spices that has no occidental equivalent that I can think of. There is a small box of handmade chocolate from Oaxaca that has been calling my name ever since the start of hot chocolate season. And just added to my roster are six juicy, plump Meyer lemons that were hand-delivered, and are begging to be made into something that exploits their unique, sweet-citrusy character. 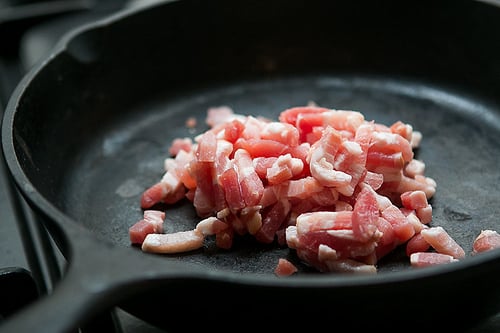 While I love to play around with these things in baking, it’s hard to share any recipes because not everything is available everywhere. And while the internet fills a lot of gaps in global availability, there are no substitutes for a number of things. Fortunately cornmeal is something that is readily available not just in America, but is used in the cuisines of India, Sri Lanka, and Italy, as well as Central and South America. And a few months back, I was happy to find a bag of cornmeal in a shop VT Cash & Carry, up in the lively Indian quartier of Paris.

The French have a different relationship to corn than Americans. It’s native to us so we use it often, in a variety of guises – mostly fresh, but also dried and ground. But other cultures have cornmeal-based specialties. Lest you think the French don’t ever use cornmeal, think again, mes amis. 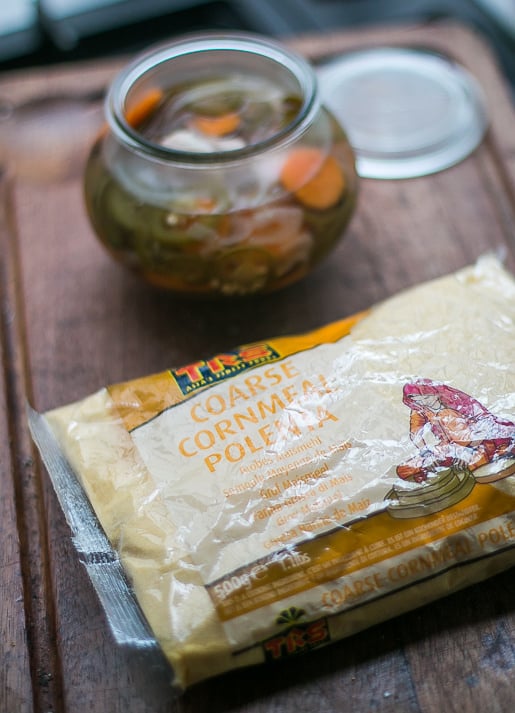 Taloa (video) is a specialty of the Basque country and you can find cornmeal and farine de maïs (corn flour, which is finely ground) in natural food stores. Sometimes you need to massage the non-transparent bag to feel how finely ground the contents are. (I’m used to strange looks from other shoppers, watching the strange fellow in the store fondling bags of ground corn.)

To the unitiated, it takes a fairly precise knowledge of French culinary terms to know that semoule (which would perhaps best translate to “meal”) is different from farine (flour). The bag I got was labeled polenta, which is kind of a catch-all word that refers to cornmeal that’s not too finely ground. Fortunately I could see what it was through the bag. (Although unfortunately, I later discovered it was infested with little critters, who were just as hungry for cornmeal as I was.) 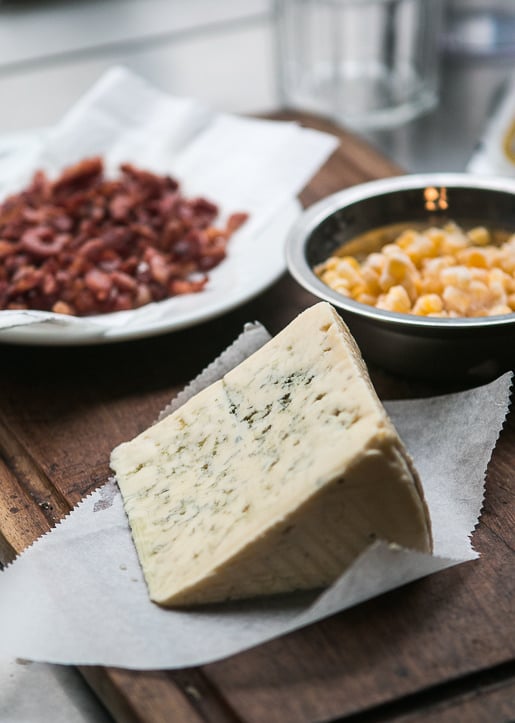 Because Americans are often wont to “dial it up,” I figured that I’d add my deux centimes to that, and rev up the standard cornbread with bacon. While I was frying up the lardons, I thought – “Hmm, I bet crumbled blue cheese would be good in it, too.” So while the bacon was draining, I started crumbling some blue cheese that I had on hand. And, well, since I was adding salty bacon and sweet, sharp fromage bleu, why not add some of the marvelous smoked paprika that I had in my spice cabinet from Spain for a bit of smokiness? (That is another ingredient I don’t get to use often enough.) So into the batter everything went. 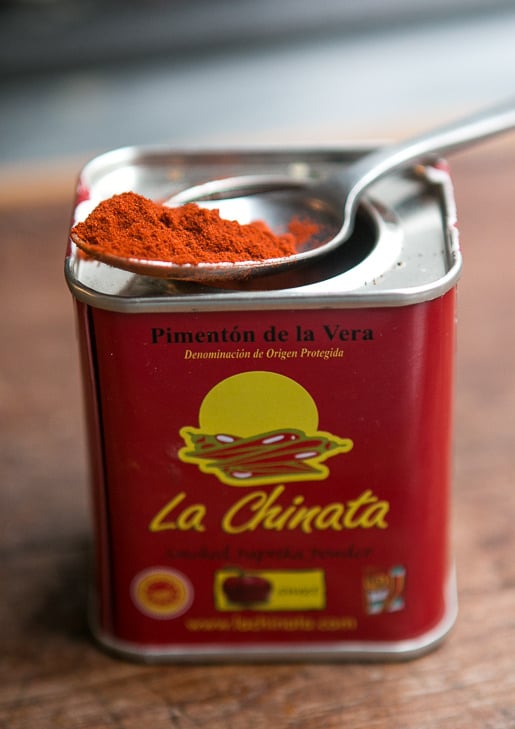 However, after all my tinkering, I decided that my variation wasn’t an improvement on the original. And that was confirmed by Romain, who said “It tastes like construction ______.”

I didn’t catch that last word, because he said it in French and it was a word I wasn’t familiar with. But it had something to do with either paste, or semi-soft concrete. Or some kind of construction material.

(On the other hand, this morning he told me I was “Pas intelligent.” Note: When you’ve got a French partner, you need to develop a certain resilience.) 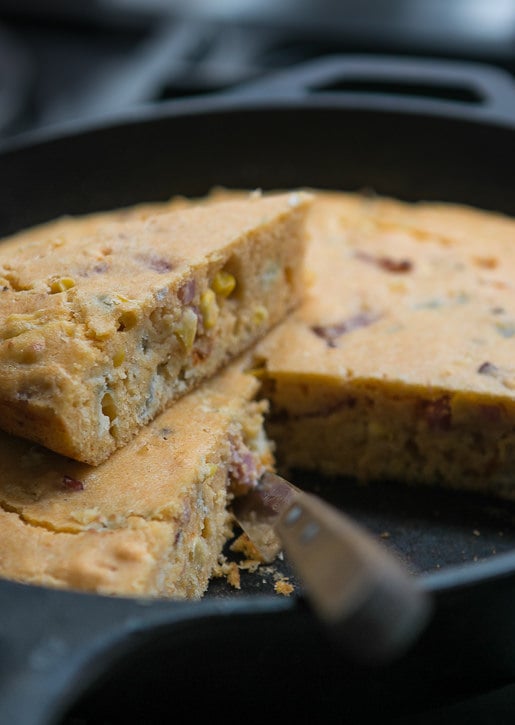 Either way, intelligent or not, I agreed, and crumbled it up to use perhaps as a stuffing. Although the blue cheese was so strong, am not sure what’s a wise idea. But I’m too thrifty to toss anything out. So I put it in my freezer, and next year, I’ll probably throw it away when the contents are no longer recognizable — or even remember-able. And, of course, I could never share a stuffing recipe with it because one ingredient would be “One bag of leftover cornbread with bacon, blue cheese, and smoked Spanish paprika, torn into bits.” Which would, of course, give a number of people fits. (Which I would agree with.) 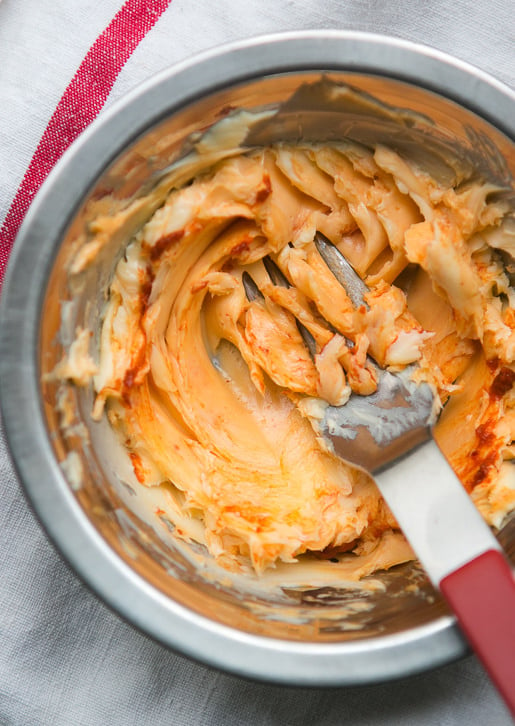 However when I went to the refrigerator to pull out more butter and some milk, to start all over again, as I was closing the door, I noticed a jar of harissa on the shelf and thought, “Hmm. I wonder what cornbread would be like with a dab of harissa in it?” But that little voice in my head, that often tells me things to do, reached down and tapped me on the shoulder, to remind me that some things weren’t meant to be tinkered with too much. So I mashed up some of the Tunisian hot sauce with some softened butter, and spread it on the warm cornbread, which was a perfect pairing. So maybe I’m not all that intelligent, but at least that little voice that pops up in my head from time to time is.

There is a vocal group of people who feel that there shouldn’t be any sweetener in cornbread. Well, I feel that way when someone hands me a sweetened glass of iced tea, when I see bagels with dried fruit in them, or when I see a Caesar salad with fried chicken or shrimp on it. As I get older, I say: to each their own. (And since few people call it “Banana cake,” in favor of “banana bread,” I rest my case.) If you don’t like it, just leave it out. But since we’re on our high-horse, if you can get it, stone-ground cornmeal makes much better cornbread. You can find it in natural food stores and online. However regular cornmeal will be fine. (In France, it’s available in markets that specialize in Indian, Sri Lankan and Middle Eastern foods. You can also use instant or regular polenta that’s not too coarse.) In the UK, cornflour is cornstarch (very finely powdered corn) and should not be used. Buttermilk give the cornbread a nice, light texture. You can make your own by measuring out 1 cup (250ml) of milk minus 1 tablespoon, then adding a tablespoon of lemon juice or vinegar (white or cider), and letting it sit for 10 minutes, until it looks lumpy and curdles a bit.
For the cornbread:
1 cup (140g) all-purpose flour
3/4 cup (120g) yellow cornmeal, preferably stone-ground
2 teaspoons baking powder, preferably aluminium-free
1/2 teaspoon baking soda
3/4 teaspoon salt
1 cup (250ml) buttermilk
1/4 cup (4 tablespoons, 60ml) melted butter, salted or unsalted, cooled until tepid, plus 1/2 tablespoon of butter for greasing the pan
1 large egg
2 tablespoons honey
For the harissa butter:
4 ounces (8 tablespoons, 115g) salted butter, softened to room temperature
1 teaspoon harissa, or to taste (see Note, below)
1. Preheat the oven to 400ºF (200ºC). Have ready a 8- or 9-inch cast iron skillet and drop the 1/2 tablespoon of butter in it. If you don’t have a cast iron skillet, butter an 8-inch (20cm) square pan, or similar sized baking pan.
2. In a medium bowl, use a whisk to mix together the flour, cornmeal, baking powder, baking soda, and salt, until there are no lumps. If you see lumps, sift the ingredients together.
3. In a separate bowl, mix together the buttermilk, melted butter, egg, and honey.
4. About 5 minutes before you’re ready to mix and bake the cornbread, put the cast iron skillet with the butter in it in the oven, to melt the butter and warm the skillet. (If using a buttered baking pan, no need to put it in the oven first.)
5. Make a well in the center of the dry ingredients, then mix in the wet ingredients using a spatula. Stir just until the dry ingredients are moistened. Small lumps are okay, but don’t overmix; that will result in tough, dense cornbread.
6. Wearing an oven mitt, carefully pull the very hot skillet out of the oven, being conscious of how hot it is. Spread the butter around the inside of the pan with a paper towel or brush, then pour the batter into the pan.
7. Bake the cornbread until the center just feels like it’s about set; in a cast iron skillet, it will take 10 to 12 minutes, in a baking pan, it will take about 15 to 18 minutes.
8. While the cornbread is baking, mix together the softened salted butter with the harissa until thoroughly blended.
9. Let the cornbread cool slightly, then cut squares of the cornbread. Serve warm, slathered with butter.

Storage: Like most baked goods, cornbread is best served warm from the oven. If you wish to reheat it, it can be wrapped in foil and reheated in the oven, until warm. Cornbread can be frozen, if well-wrapped, and stored for up to two months.

Note: Harissa is a paste-like Tunisian hot sauce and available in shops that specialize in North African and Mediterranean foods, as well as in well-stocked supermarkets. It’s available online as well. My go-to recipe for harissa is in My Paris Kitchen if you want to make your own, and you can find recipes online as well.

What’s the Difference Between Cornmeal and Polenta? (The Kitchn)

How To Tell if Baking Powder Is Still Good