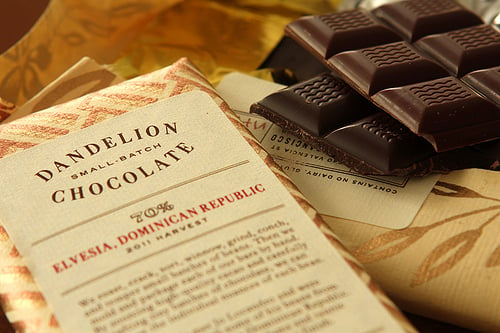 One of the interesting things about leading chocolate tours is that I get to meet a wide swatch of people who have various interests. Some just like to come and taste, others have more professional aspirations. When Todd Masonis joined me a few years ago, we had some talks about his idea of opening a bean-to-bar hot chocolate salon. I had a pretty good amount of experience meeting with – and tasting – many of the American bean-to-bar chocolates, folks who were participating in what Chloé Doutre-Roussel, whose is one of the most knowledgable people about chocolate that I know, refers to as “The American Chocolate Revolution.” And I was encouraging, but also knew of the difficulties these folks faced in terms of building a facility to make chocolate.

Many of these people are mavericks, with the “revolution” starting over a decade ago, and now encompasses perhaps two dozen or so enterprising people who’ve been producing bean-to-bar chocolate in the states. Todd had started a successful internet company so I could tell he had the drive to do something new and interesting, but sourcing the beans and getting the equipment together isn’t easy. So no one was more surprised than me to get a note in my Inbox recently from Todd, who said that inspired by our talks on that trip, he was about to open his new place, Dandelion Chocolate, producing bean-to-bar chocolate in San Francisco’s Mission district with his business partner, Cameron Ring. And I was intrigued. 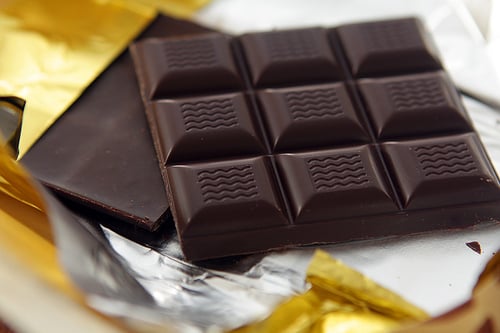 On my last trip to the states, Todd sent me a few bar of chocolates they had produced now that they were in full production. I kept them for a few weeks because freshly made chocolate doesn’t taste as good as chocolate that’s at least a few weeks old, as it needs time to mellow and allow the flavors to soften and harmonize. Like any fruit, which chocolate is, each cacao bean and tablet has its own story and it’s printed on the wrapper of each bar.

Tasting them, I found flavors that I wasn’t used to experiencing in chocolate. The Rio Caribe (Venezuela) was noted to be from their first official batch of chocolate. I found it had a fruitiness typical of chocolate from Venezuela with some sharp tannins behind it. Their tasting notes mentioned “toasted marshmallows” which made me think about it some more and I chewed, and I did catch those dark, brusque notes found in charred marshmallow skins (one of my favorite treats!) but with the sly sweetness that sneaks in afterwards. Perhaps I will save the rest for a batch of makeshift S’mores?

The Madagascar bar was noticeably lighter and redder than the Rio Caribe which they noted had a strawberry – citrus flavor. And true, it did have a curious fruitiness reminiscent of lemon with the sweet, tanginess of strawberries. (I wanted to say “strawberry skins”, but it sounded too-too. Yet it was true that the chocolate had the some of jellied, jam-like taste that seems to concentrate in the skins of strawberries. Okay…I’ll stop now with the obtuse strawberry references.) 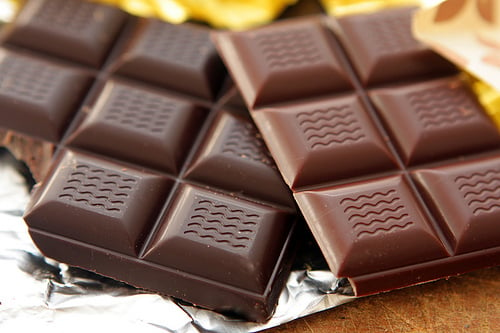 Dominican Republic was the last that I tried, made from beans grown by farm started by Swiss immigrants two hundred years ago in the Dominican Republic. Because they are all high-percentage chocolates (75%) they are more sharp in flavor and robust in flavor. I liked this one the best because it had the roastiest flavor of them all, and I like that taste in chocolate.

I was quite surprised at the range of flavors in each bar, which represent the current crop of cacao they’re working with. Chocolate-making is a little bit wild on a small-scale; the big-boys blend beans which have different flavor profiles and roast them to achieve a consistent and standardized flavor profile. But for small chocolate-makers, they have to depend on their sources to provide the right beans, ones that have been properly dried and fermented, and it’s hard to control that process like the big companies can. So folks enjoying these bars should expect variations as well as flavors they’re not accustomed to. But I am always happy to see folks pushing the envelope of chocolate – experimenting with different beans for various plantations, and so forth, because it’s not easy to do what they are doing. And I like when things taste handmade with unexpected nuances. 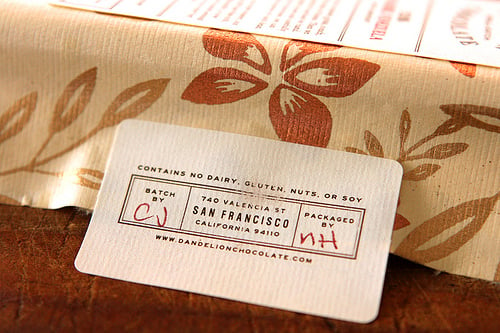 Each table is also signed by the chocolatier and the person who wrapped it up. And yes, they’re making hot chocolate, which was Todd’s original dream. I’m looking forward to seeing what Dandelion Chocolate produces in the future, and on my next visit to San Francisco, I plan to stop by for a warm cup of hot chocolate. And I’ll raise it to toast Todd on his success – perhaps with a homemade S’more chaser.

How to Make Chocolate Bars

The Great Book of Chocolate (Amazon)