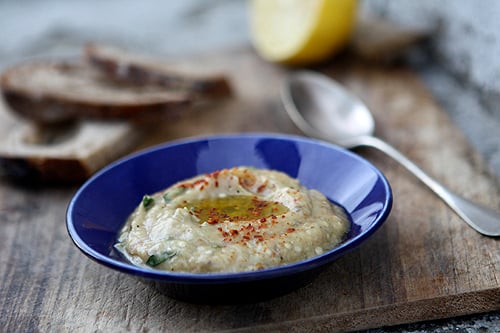 I’d not heard of Eggplant Caviar (caviar d’aubergine), until I moved to France. I’m not sure why that was—perhaps in the states it’s called something different when I was served it? Could it be labeling laws, so I wouldn’t confuse eggplant seeds for fish eggs? Or did I just have my head in the sand for too many years and only saw the light when I moved away?

Whenever I had eggplants lying around, I always made baba ganoush or moutabal. But eggplant caviar is even easier to make and less-rich: it’s a smoky tasting eggplant purée with a squirt of fresh lemon, some garlic, and a bit of heat from a sprinkle of bright-red chili powder. 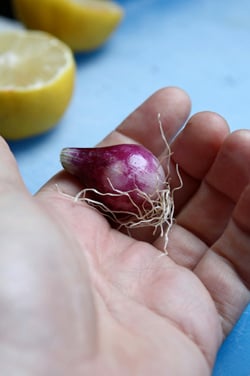 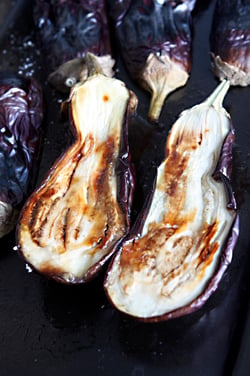 I’m a big fan of Korean chili pepper called gochutgaru, and you can get a big bag for around €7 in most Asian markets. Since it’s used by the spoonload to make kimchi, you shouldn’t have any trouble finding it in your nearest Asian grocery. I find myself reaching into that bag so much because of the way it’s adds a bit of sneaky heat, and dazzling red color, to various foods.

I find myself using it in everything, from marinating meat and chicken, to adding to scrambled eggs and pastas. I’m not turning Japanese—I’m turning Korean!

(Although I probably should concentrate on my French a bit more, first…) 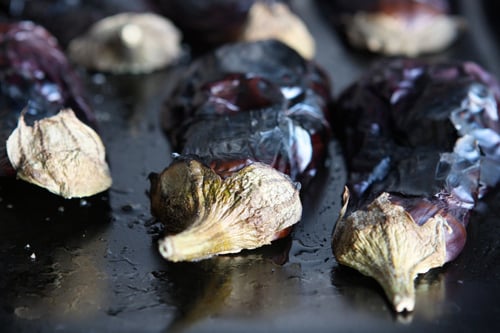 It’s amusing that people will write to me with things like, “David, grow that herb in your garden!” or “Build a chicken coop so you can have fresh eggs every day!” or “Set up a smoker in your backyard…and make your own bacon!” Um, I live in a city and my garden is a rectangular pot the size of a shoebox (and not the kind for boots, but the kind for sandals), that yesterday was pillaged by a gang of malevolent pigeons. I caught them the first few times, but they waited for me to go out, then did their dirty work after I split.

And my heavily sloped—and slippery, zinc roof probably isn’t the best place to set up a fire-fueled heat box. Especially since the last storm we had unearthed trees in the nearby park and I’m not sure I want to be responsible for a porky fireball (or a hailstorm of fresh chicken eggs) falling off a seven story building onto a crowd of people on the sidewalk. With my luck, they would likely bring back the guillotine. Just for me. 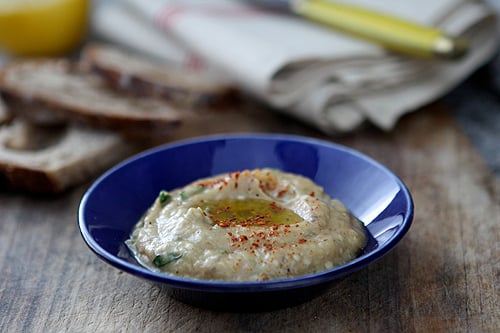 The great thing is that you can safely smoke the eggplants on a top of a gas stove, like I do, which gives them a wonderful goût fumé. I’m also a big fan of smoked salt, which I bring back from the states, at the risk of getting interrogated at the airport for hauling luggage smelling suspiciously of smoke and fire.

The other thing I like about this recipe is that really, all you need are a couple of eggplants. The other ingredients you should have in your pantry. (So you don’t have to pay a princely sum to make it.) In fact, perhaps this dip was christened with the name ‘caviar’ in an attempt to elevate its status. After all, this is just a simple dip. But because the eggplants get the royal treatment, it’s worthy of a lofty position in your repertoire, as it has become in mine.

If you don’t have a gas or outdoor grill, you can make this by just oven-roasting the eggplant for a longer period of time, until they’re completely soft and wilted. Another nice addition is to sprinkle to top with tangy sumac, which I had leftover from when I made fried beans with feta.

Storage: Eggplant caviar can be kept refrigerated for up to five days.

Fried Beans with Sumac and Feta

How to Find Items and Foods Mentioned on the Site