Eggplant and Yogurt Spread with Saffron 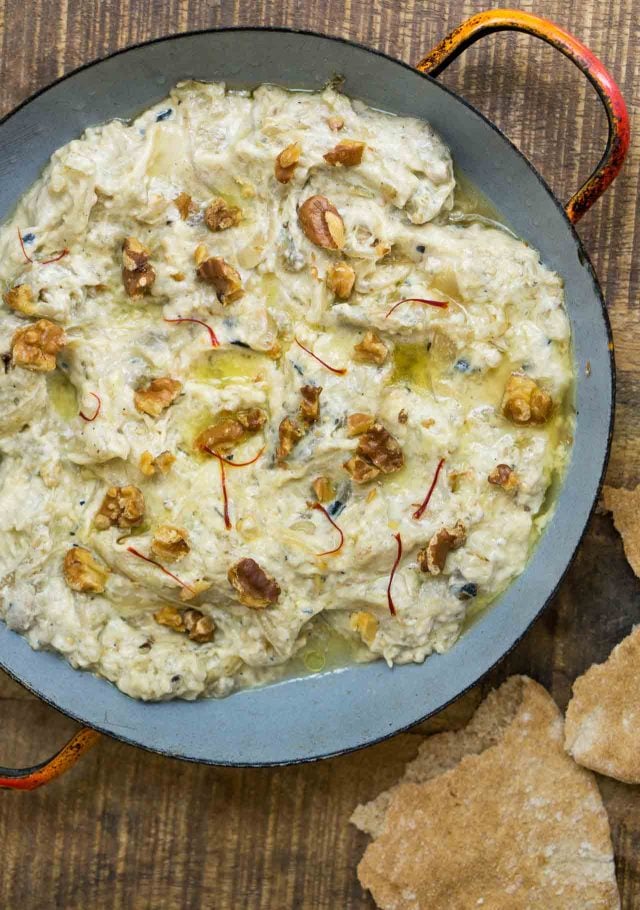 When Anissa Helou told me she was writing a book on the foods of the Islamic world, I was surprised, and a little curious. I didn’t know much about the food, but I am always drawn to the flavors, and ingredients used: Lots of vegetables, olive oil, pulses, grains, olives, spices, handmade cheeses and flatbreads, fresh fish, and grilled meats. In short, the kind of food I could live on, and sometimes, I do.

A few years ago, Anissa invited us to dinner in her loft when she was living in London, and started with a spectacular, but simple, puree of eggplant and labneb with orange saffron juice resting in pools over the top. I was familiar with Eggplant Caviar, Moutabal, and Baba Ganoush, but the idea of mixing eggplant with tangy fresh cheese was a revelation. 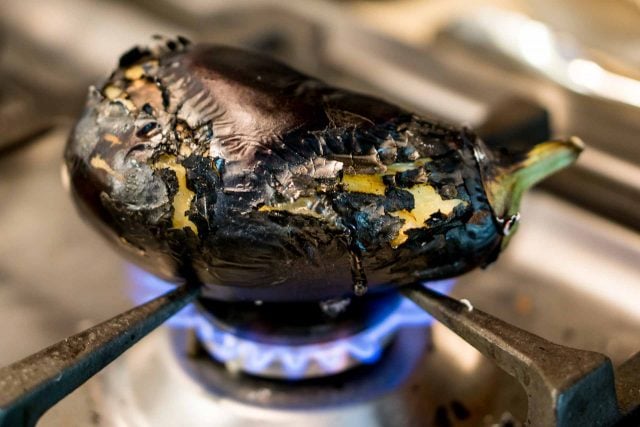 She gave me the recipe, which I’d planned to make since that evening, but it got buried in the bulging folder of recipes called “Recipes to Make” that’s part of a larger stack of folders in my kitchen, and office, that keeps growing and growing and growing. 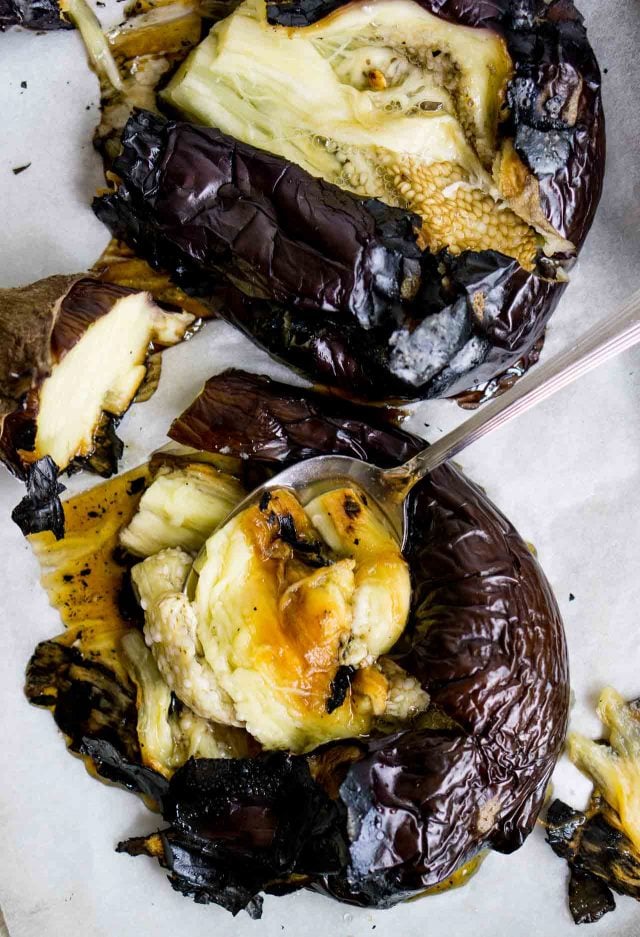 So I was thrilled to find that Anissa included the recipe in her book, Feast: Food of the Islamic World, which prodded me to give it a go. The book itself is huge; over 500 pages, with a subject, and scope, that merits the heft. The book starts out with an eighty-page chapter on breads, everything from saj to Syrian fatayer, ovals of dough filled with cheese, parsley, and spinach.

There’s an Indonesian multilayered bread, called Martabak, filled with curried lamb and scallions, I’ve bookmarked because the idea of having a recipe for fried bread with a spiced lamb filling is too much to bear, and I need to make it. There’s a Baked Rice Cake with Lamb, from Iran, that features a very crusty exterior of crisp rice, enclosing a filling of tender, braised lamb. And I’m eyeing the Semolina Cake, called Basboussa in Egypt, which I think would be great with a juicy cherry compote or fresh summer fruits.

Even though some of the dishes are unfamiliar and may sound daunting, there are step-by-step photos of many of the preparations, to hold your (and my) hand, as we go. 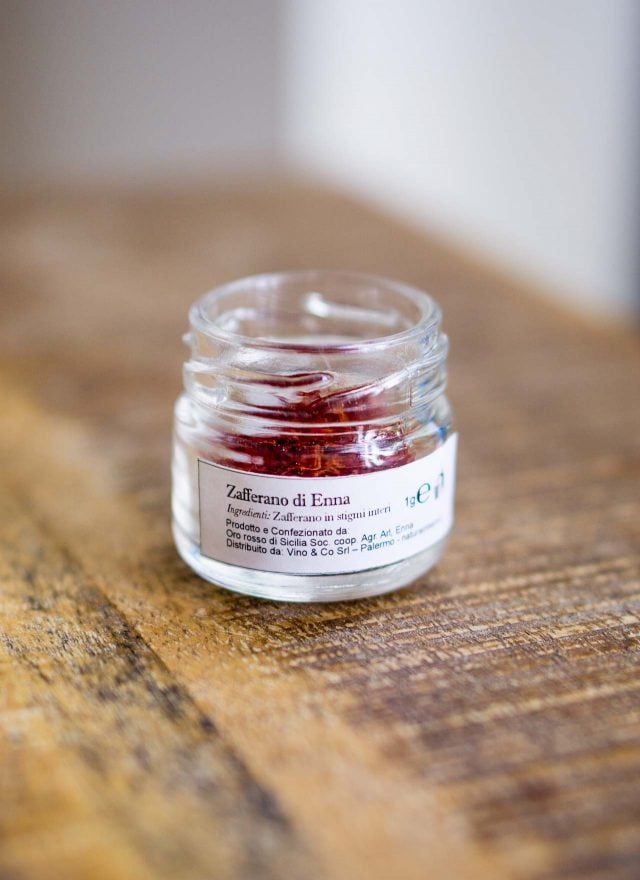 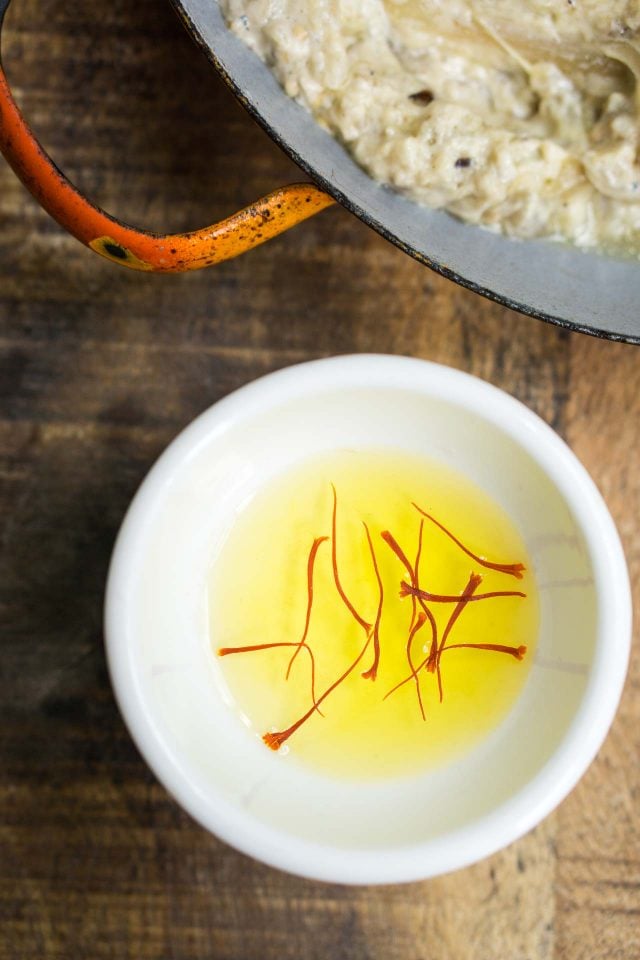 The recipe also gave me the chance to finally crack open the saffron I got in Sicily. Real saffron anywhere is expensive, but there isn’t anything else like it. Using something else is like substituting nonfat milk for cream in a recipe; the extra expense is worth it. Fortunately, you don’t need a lot for this recipe, but saffron really does heighten everything it lands in, including this spread. A lovely Iranian woman gave me some saffron from her homeland a few years ago at a book event and it’s so precious to me that I keep it very well-hidden. (Come to think of it. Where did I put that?…)

Eggplant isn’t the prettiest thing to photograph, but when sautéed with good olive oil, onions, and garlic, it turns into something silky, and tasty, and works magically as a base for (and with) other flavors. And regarding olive oil, people forget that olive oil isn’t just something that keeps foods from sticking to the pan. It’s a flavor. I thought the original recipe in the book had too much, but corrected myself after I stirred in the eggplant when I was cooking it, and found that it was necessary for moisture, and – yes – for flavor, when I tasted it later. 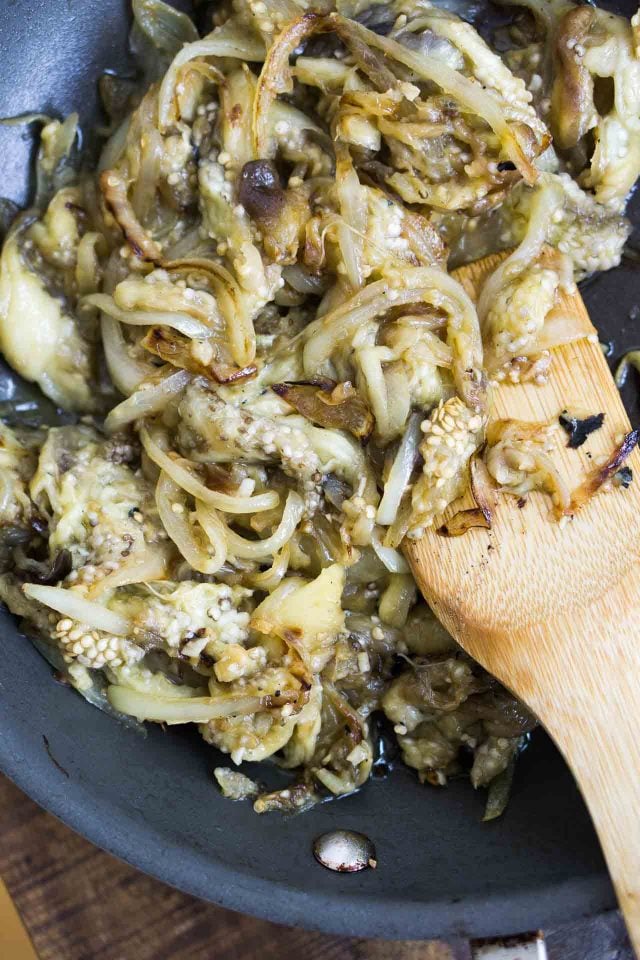 A word about that labneh: The recipe is called Eggplant and Yogurt Spread (Borani-e Bâdenjân) by Anissa, and yogurt is the base for labneh. I tried it with Greek yogurt and it didn’t have the right assertive tanginess and texture to stand up to the eggplant. You can buy labneh at most Middle Eastern markets, but it’s incredibly simple to make your own – you basically strain plain yogurt for a few hours, or overnight, and that’s it. 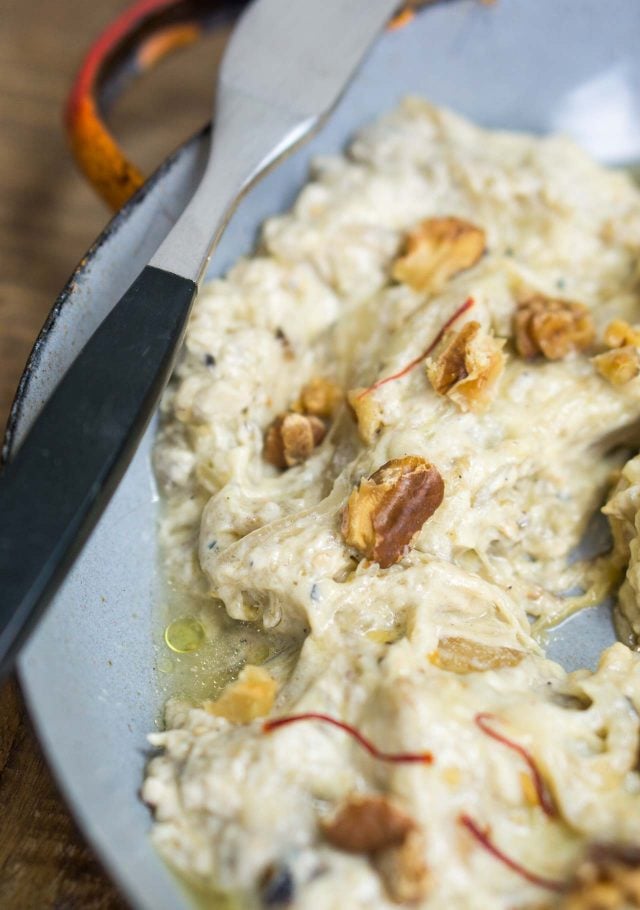 Feast is one of the few books that, as soon as I arrived and I opened it, I sat down for a good thirty minutes just to read through it. It’s a wide-ranging book on a cuisine, and a culture, that are unfamiliar to many of us, and I’m looking forward to learning – and eating – more from it. 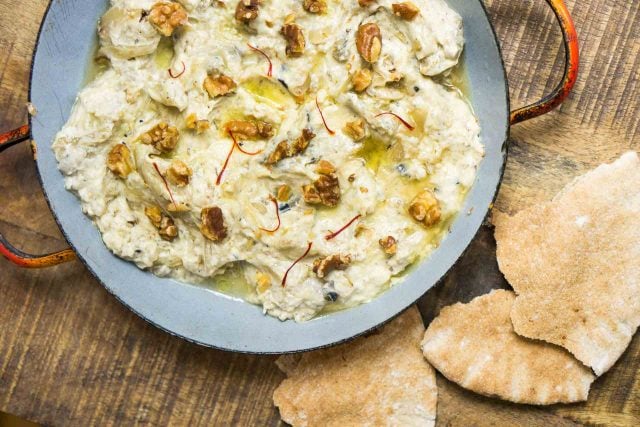 Adapted from Feast: Food of the Islamic World by Anissa Helou A few notes on the recipe. This uses labneh, made by straining yogurt, and has more acidity than Greek or Greek-style yogurt, at least to my taste. So I recommend you use labneh. (It's easy to make - recipe here.) If you use Greek yogurt, you'll probably want to add a little lemon juice, to taste, when everything is mixed together. Saffron is a costly seasoning and well worth it. Be sure to buy from a trusted source, so you get what you pay for. If it's out of your budget, you could mix a little powdered turmeric with some hot water for the same effect, but note that it's not the same flavor (and not authentic), and stains anything it touches. Lastly, I was surprised at how much olive oil was recommended and tried cutting it back by half. As I cooked everything, I realized that it was correct amount needed to get everything to the right consistency, and flavor.
2 medium (1.2 pound, 500g) eggplants
1/4 cup (60ml) extra-virgin olive oil
1 medium onion, peeled and thinly sliced
2 cloves garlic, peeled and minced
kosher or sea salt
freshly-ground black pepper
1/2 cup (125g) labneh
pinch saffron threads
1 tablespoon water
1/2 cup (50g) toasted walnuts, coarsely chopped
1. Preheat the oven to 350ºF (180ºC). Line a baking sheet with parchment paper.
2. Prick the eggplants a few times around them with a paring knife. Set the eggplants directly over a gas burner and roast, turning occasionally with tongs, until they are soft and wilted, 5 to 10 minutes. (The longer you leave them on the flame, the more "roasted" they will taste.) Place the eggplants on the prepared baking sheet and bake until they're soft all the way through, 20 to 30 minutes.
3. Remove the eggplants from the oven and when cool enough to handle, split them open and scoop out as much as the pulp as possible, and set it in a mesh strainer or colander. Let drain for 20 minutes, stirring it a few times while it drains. Once it's drained, mash the eggplant with a fork until it's a chunky puree.
4. Heat the olive oil in a skillet over medium heat. Add the onions and season with a bit of salt. Cook until wilted and translucent, stirring constantly, about 5 minutes, then add the garlic and cook for 1 minute more.
5. Add the eggplant and cook for another 5 minutes, stirring occasionally, seasoning with salt and pepper. Remove from heat and cool completely. Add the saffron to the water and let it steep.
6. Stir in the labneh and scrape the spread into a wide serving bowl. Spoon the saffron threads and the liquid over the spread and sprinkle with chopped walnuts.

Serving: Serve the spread with pita bread, or another flatbread, or crackers.

Storage: The spread will keep in the refrigerator for 4 to 5 days. 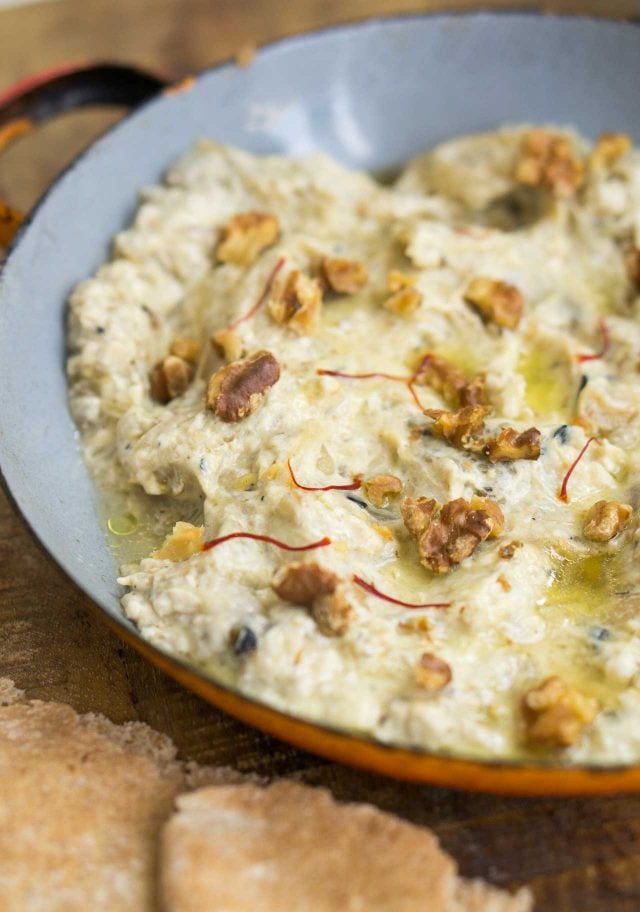 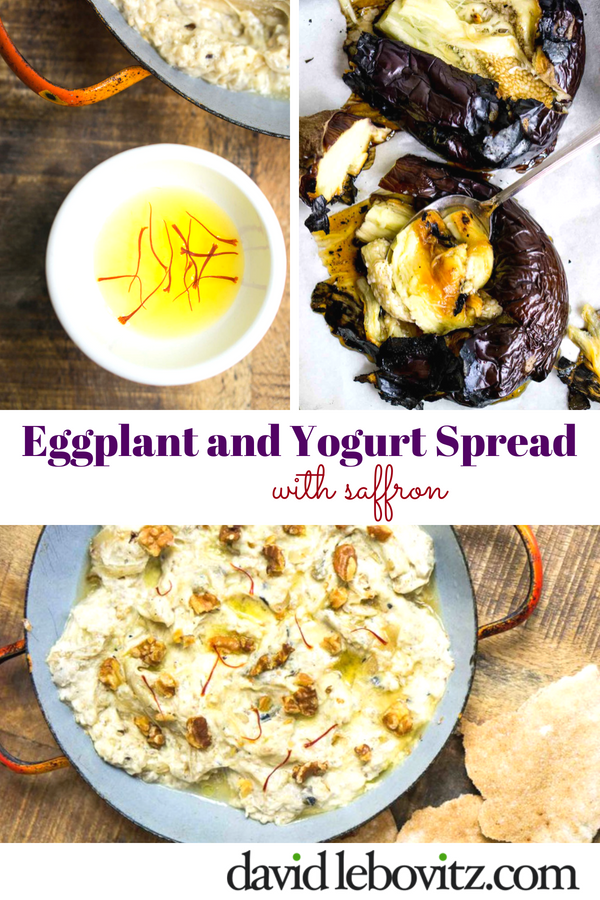