Menu
« …and that was the RUB
Porchetta » 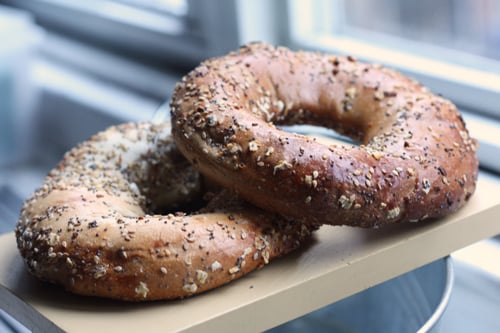 Tradition schmadition. Something I’ve noticed every time I come to New York is that the bagels keep getting puffier and puffier. (Which happened before everything started going 3D.) When I eat a bagel, I want a chewy exterior with lot of seeds on it and enough dough inside to support a swipe of cream cheese. I don’t want a whole loaf of bread in there. Is that too much to ask?

Roaming around the streets of New York, I’ve seen bagels practically as round as a baseball and others as fluffed up as a burger bun. And I know you’re not going to believe this, but I even saw bagels with dried fruit in them. Oy. What is this city coming to? 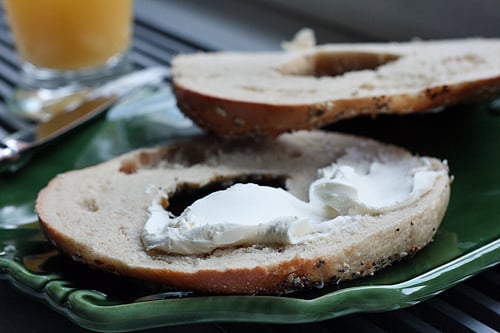 Many purists kvetch that one should not even toast a bagel, that they should be eaten fresh, when they’re toothy and a bit tough. But with all the dough in some of those bagels, unless you do the Jewish American Princess dough-dig (pulling out the bread, so you’re just left with the crust, reducing the calories), something passing as a bagel can be just another roll-with-a-hole.

When I stopped into Pick a Bagel on the corner of Lexington and 77th Street, I was about to order my usual Everything Bagel, the kind crusted with lots and lots of seeds (and not a raisin or dried blueberry in sight, thank you), I noticed a basket at the end of the bagel selection filled with what looked like bread intended for a game of carby ring-toss. 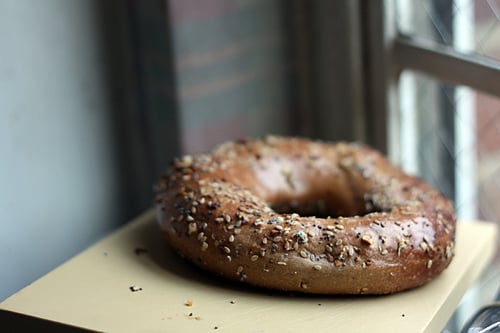 I asked what they were and the clerk told me they were “flat bagels.” Say what? Why I have I not ever heard of a flat bagel? Someone had wised up and realized that for bagel lovers, it’s about the crust, not the crumb. They actually look closer to the bagels sold in the bakeries like Finkelsztajn on the rue des Rosiers in Paris. (Which go for around €2.75 a pop and from the looks of them, I don’t even think they’re boiled.) So they’ve become my morning breakfast everyday since arriving.

Another bonus is that flat bagels easier to pack. So you know what I’m hauling home in my suitcase. Because flattery will get you everywhere. Including back to Paris.