…and that was the RUB 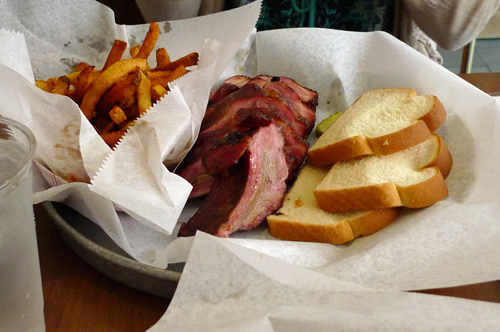 We came for the burnt ends. But to be fair, when we called the day before to see if RUB Barbeque took reservations, we were told that they sometimes run out of certain items because they take days to smoke. So, of course—with my luck, we arrived at RUB, aka, Righteous Urban Barbeque, to… 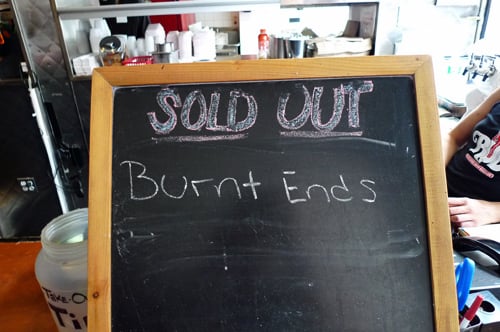 I think that sign is the VA (version Américain) of the infamous Fermeture exceptionnelle I’ve come to know all too well. I asked at the counter, “Are they really as good as they say they are?” and the woman replied, “Yes, they are.” When I started to cry, the staff sat me down at the bar and gave me a Country Cocktail of housemade lemonade and a double shot of bourbon.

When I pulled myself together, the extra-cheerful waiter with the New York-style forearms (good gosh, I forgot about all the worked-out people in New York) kindly noted that the burnt ends would likely be available in thirty minutes. But when faced with a long menu of pulled pork, brisket, and smoked turkey, I didn’t think I could wait thirty minutes, so the staff carried me over to a table and we ordered.

My table mates weren’t as keen as I was to try the barbecued bacon, which the waiter did warned was “pretty heavy duty”, but I did prevail over their other objection and ordered a side of fries. I ordered a ‘large’, since there were three of us, and the waiter said that two small orders were the same price, but you get a lot more fries. So why not order that?

Having been back in the states for a whole twenty four hours and being served a ‘small’ frozen yogurt that was roughly the size of a pineapple at Forty Carrots (which I didn’t get at all; it tastes like frozen cold cream—although I did manage to scrape out and eat each and everyone one of the rainbow sprinkles I could fish out), and I wolfed down a black & white cookie the size of a French dinner plate which my host kindly left for me to enjoy upon arrival, I figured the three of us would probably be fine sticking with one small order of fries. 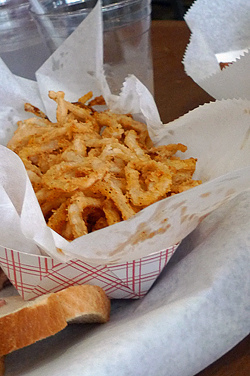 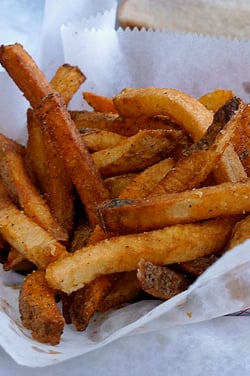 Admittedly, because I live in Paris, I’m a little spoiled when it comes to barbeque. My brisket wasn’t falling-apart tender, a bit firm, but the pulled pork wasn’t bad. It was a bit gooshy for my taste (I like a little more texture, like carnitas) but the fries were excellent, as were the onion strings, feathery and crisp-fried strands of onions, well-seasoned with just the right amount of salt. 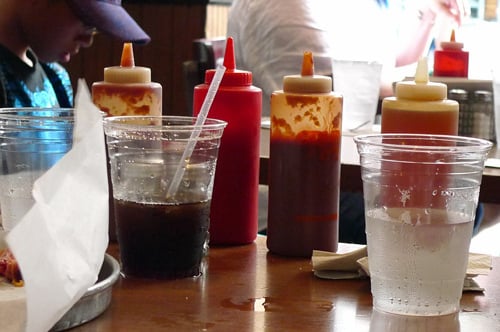 Good lord, if there’s anything that would make me want to stay stateside it’s fries like this. (And, of course, the customer service in America continues to astound. People are, like, falling all over themselves to help me in stores. I had to buy a new cell phone and the man at Radio Shack spent about thirty minutes unwrapping and getting my phone set up so I could just walk out the door and start using it. And I was sure the woman at Bed, Bath and Beyond would not be able to sleep at night until she found me an Oxo cherry pitter amongst the massive jumble of housewares stacked to the ceiling in that hangar-sized store.) 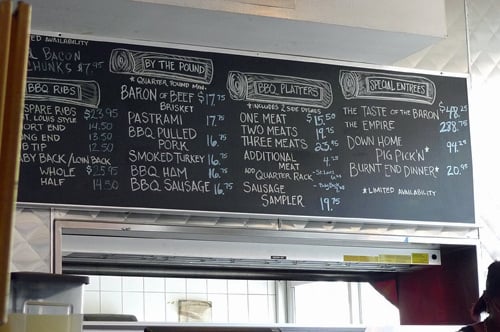 But when French fries are made of real potatoes and left in the fryer until crisp, with not a soggy dud in the bunch, it’s hard to turn one’s back on them—and my country. (It’s going to be even harder to leave Bed, Bath and Beyond behind, too. And I’m thinking of bringing the guys from Radio Shack back with me to Paris, if I can book a few extra seats on the plane.) 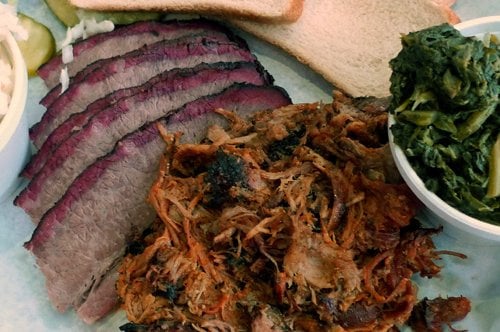 One diner, who shall remain nameless (who is family), was a picky eater, and the waiter with the amazing forearms was kind enough to explain each and every variety of rib on the menu. She ended up with a half-rack of baby back ribs and after eating one, pushed the rest to the side of the plate. Being a good uncle, I thought I’d help her out and took a bite of one and had to agree they weren’t the pinnacle of tender short ribs.

I’ve been to Texas so it’s tough to compare New York to Austin. (I was kidding earlier about bbq in Paris. So don’t ask me where to get barbeque there.) We did have a good time, but I’m having a little trouble getting down American-sized portions and only managed to eat two-thirds of my dinner.

I keep forgetting about le doggy bag, but I don’t think leftover, reheated fries make the best breakfast..although when I woke up this morning, I wouldn’t have minded a bit of that cornbread with a lot of butter smeared over it. And I was dreaming a bit of those burnt ends, which means I probably have to go back.

Although I found something else to have for breakfast, in the meantime… 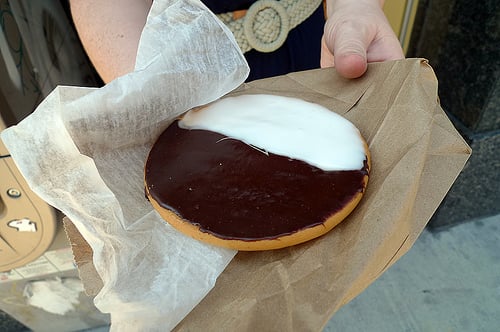 Too Many Pretzel Croissants?