I woke up this morning, and could not even make it through to the second half of my flagel. 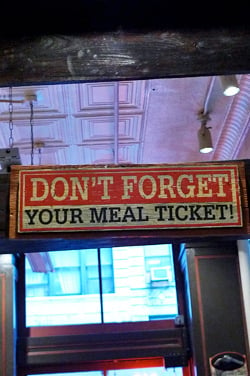 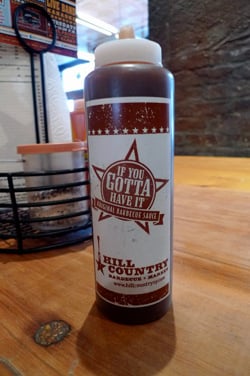 My stomach was stuffed from yesterday, which began at Baked in Brooklyn, then extended through to a burger and fries at Shake Shack, across the border to Connecticut for steamed lobster, then back into New York City with a quick detour through the Apple store, then home to polish off the box of cookies I absconded with from the boys at Baked. Because, you know, I had to eat them while they were still fresh. Right? 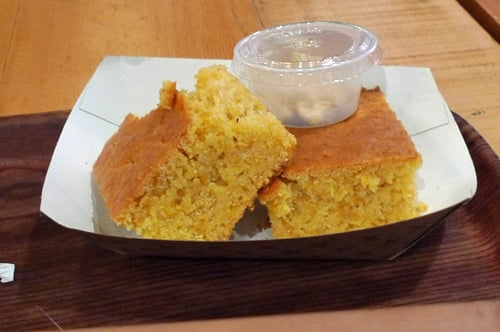 So you can imagine that I didn’t wake up with much of an appetite.

I had a meeting over on 26th Street which ended around noon, coincidentally coinciding with lunchtime, and I found myself right in front of Hill Country barbecue. I’d had barbecue already at RUB, and I knew that Hill Country was supposedly the best in New York City (and I also know about Dinosaur, but Hill Country is Homesick Texan-approved, according to the word on the street), and there I was, and there it was. So I thought I would ‘take one for the team’—and went inside.

Hill Country is counter service, meaning they give you a ticket on the way in, you pass through the meat counter, where choices range from pork rib and brisket, to Beer Can game hen and Kreuz’s sausage, delivered from the mothership in Texas. 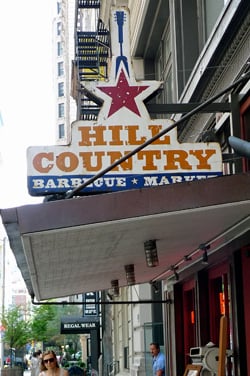 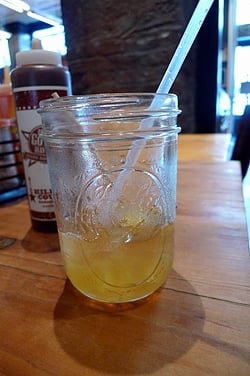 There’s a soda called “Big Red” shipped from Texas as well. But my drink of choice is always an Arnold Palmer, a mix of lemonade and ice tea, served southern-style, in a jar.

The fellow at the pit was pulling meat out of a big metal bin, while the service person was piling it onto heavy pieces of paper (there’s no plates). Everything is by the pound ($22.25-$8.50) so I ordered four strips of brisket and three pork ribs, changing my order at the last minute to add an additional rib. Because, well, they looked kinda good. 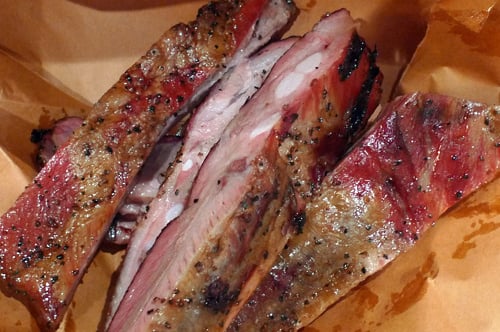 You then can pick out the sides you want, and I went for confetti cole slaw and cornbread with ancho-honey butter. The Q? It was great. The ribs had a smoky flavor that permeated all the way through; meaty and sweet, with just enough fat to make them tender. My lean brisket was terrific, too, dipped in a puddle I made with the barbecue sauce provided on the tables, along with a big roll of paper towels. Especially appreciated was the large sink with plenty of extra towels in the dining room, for in-between clean ups, which I did twice during my lunch, and once afterward. 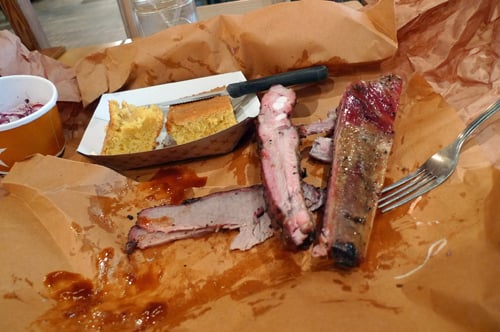 When I brought my ticket to the cashier, I was a bit surprised when the bill came to nearly thirty dollars (not including tip), but I suppose that’s cheaper than a trip to Texas. And it was mighty good barbecue, although I had to leave two of the ribs behind because, seriously, I just couldn’t eat anymore. For those that want to get out of there for less than I did, there are lunch specials, like the barbecue beef sandwich with a side and drink for $11.50.

And there was a “healthy” lunch on the blackboard for $10, which, in retrospect, was probably what I should have ordered. Because I can barely face the Sweet and Salty Chocolate Cake from Baked that’s sitting in the next room right now. And it would be a shame if I left any of it behind.