Bread, on the table…s’il vous plait 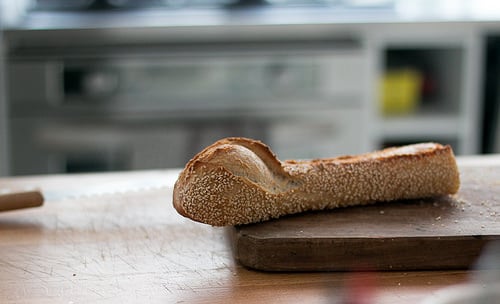 One of the things that I see when dining with visitors to France is that right after they pluck a piece of bread out of the bread basket that is invariably set on the table in cafés and restaurants, they start looking around – a little nervously – where to put their bread down. While the conversation is going, I sense a bit of multitasking – their eyes nervously scanning the table, darting back and forth, looking for something — a plate, a board, an extra napkin…anything to put their bread on.

Finally, they settle on the side of their plate or bowl as that’s the only option that seems to be available to them. But that’s tricky since the sides of plates are sloped. Their minds continue to race as they mentally calculate the engineering behind finding the exact correct angle to place the bread on the plate, usually close to the rim, so it has something to hang on to (because, darn, those porcelain plates are slippery), while trying to look nonchalant and continue to appear unruffled. But soon, the slice of baguettes starts inching down towards their dinner, and they have to keep propping it back up to keep it away from the food. Or worse, to keep it from sliding off, and onto, the table. 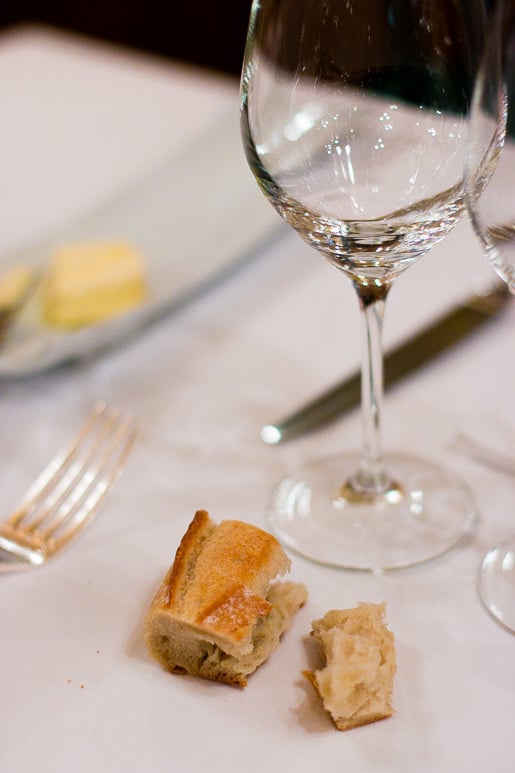 Directly on the table, though, is where the bread is placed in France. Except when dining in upscale restaurants, where you’ll not only get a bread plate, but you’ll get butter, too. (Bread is meant to accompany a meal and sop up sauce, it’s not a separate course, so butter isn’t usually served with bread in France. Exceptions are fancy tables and when you get oysters, which comes with rye bread and salted butter. Then you’re welcome to spread it on.) However in most bistros and cafés, the bread basket is brought over and plunked down, and you take a piece, and set it on the table next to your plate.

I won’t comment on the hygienic merits of doing this but kitchen towels are quite suspect, especially ones that have been used repeatedly to clean tables all night. But I’ve only been stricken with le gastro five or so times since I’ve been here. And I’m not sure the culprit was bread.

Interestingly, at the boulangeries, they never handle bread with anything but their bare hands. The only time I’ve ever seen anyone use something other than their hands to grab bread for customers was in a delightful film celebrating the merits of French cuisine when it joined the UNESCO world heritage list, and the vendeuse, at the bakery shown in the film, where tongs were used for handling the bread. I don’t get weird about other’s handling my bread, except when they sneeze into their hands first. When that happens, as soon as I get home, the first thing I do is autoclave my bread before tearing into it.

(If you’re as cautious as I am, you should know that restaurants recycle the bread. Bread slices left in the basket when you’re done eating are augmented with more bread if necessary, then brought to the next table. Maybe that’s the real reason why the respected French bread expert, Professor Steven L. Kaplan, brings his own bread with him when dining out?) 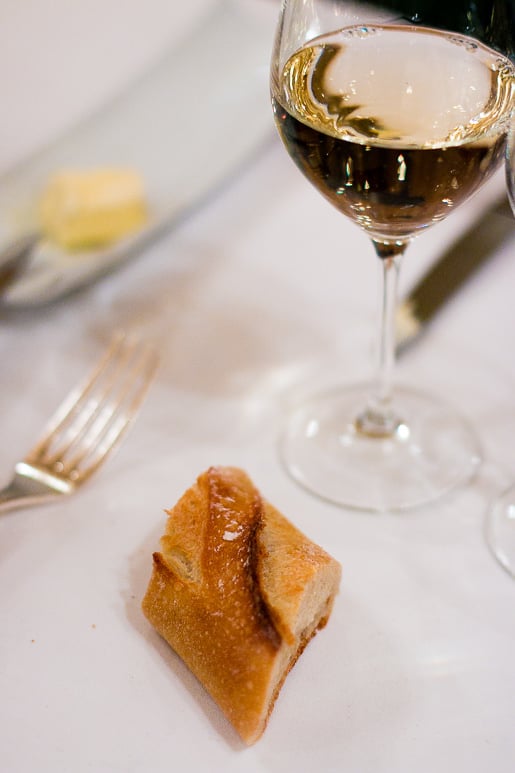 Bread is a necessity to any meal in France, and not just when tucking into a meal of la cuisine française. I’ve been served a basket of bread along with a hamburger at cafés (which are so ubiquitous, they were the meal served at the Parisian café at last year’s salon de l’agriculture in Paris, as the plat representing Paris), and I once saw a Frenchman at a Chinese restaurant happily eating his meal along with a big mound of rice, who flagged down the waitress to ask her for some bread. I can’t say I blame them, because I like – and expect – bread all the time, too.

But I don’t expect a bread plate, and you shouldn’t either. (And don’t be a Professor wanna be and bring your own bread plate. If you bring your own bread, like he does, get ready for a few jibes.) Accept that bread goes right on the table, s’il vous plaît. Grab that bread, rip it apart, enjoy the yeasty aroma when it crumbles open. Savor the shattering crust when you bite down on it (thanking God beforehand not just for the meal, but that you don’t need to vacuum up afterward). And when it’s time to put it down, be brave and set it right on the table. Where it belongs.

How to Find a Good Baguette in Paris