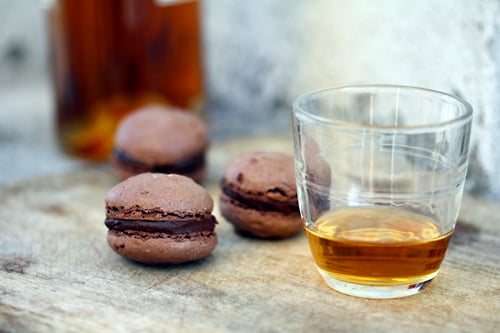 One of the most vexing tasks some bakers come across is making the perfect Parisian macaron, those ethereal little domes of almond meringue seen all over Paris, often filled with buttercream, ganache, or a fruity filling of jam. Although the original macaron didn’t have filling, but were simply fused together while warm.

So I decided to create two recipes for chocolate macarons: one with an Armagnac-scented prune filling, and another with the a pure, dark chocolate filling. 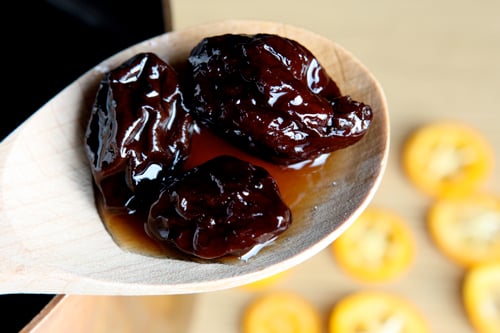 Tender, picture-perfect macarons are not easy to make. Les Macarons are all about technique, rather than about just following a recipe. Armed with a good recipe, almost anyone can make a decent brownie. You just mix, pour, and bake. I’m also a firm believer in cultural divides; there are some foods from other cultures are best left to their home turf. I’ve never had a great Madeleine in America and if you’ve ever had a ‘croissan-wich’ in the US, you know what I mean.

Using my anti-globalization stance as an excuse, I’ve never tackled macarons until I moved to France. But here I am and I have no excuse.

I phoned my friend Rob who worked at Fauchon, and he warned that the batter for perfect macarons needs to be folded just-so. One extra fold, and it’s all over. Not enough, and you won’t get that little foot. And he also advised that the chocolate macarons were the most difficult of all to get right But since those are my favorite, I was determined to get them right, no matter how many batches I had to make. 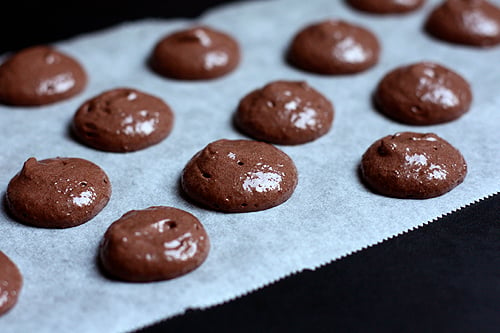 Curiously, many recipes warn to let the piped cookies sit for two hours before baking to develop a shell. Testing that theory, I baked one tray right away which rose nicely but didn’t have the perfect ‘foot’. Two hours later, I baked the second baking sheet, the same mixture, the only difference was letting it sit. The second batch rose and had a nice little ‘foot’ around each.

I spoke with my friend from Fauchon again, who said, “Let them sit for a few hours? No way, we just popped those suckers in the oven right away.”

So I tried another batch, baking them off as soon as I piped them out. This time the first batch had the perfect ‘foot’ and the second batch didn’t. Then I made yet another batch, where I tried rapping the baking sheet hard on the counter top to flatten the batter before baking, and that first batch looked great with little ‘feet’ but the second batch I baked later formed little domes. 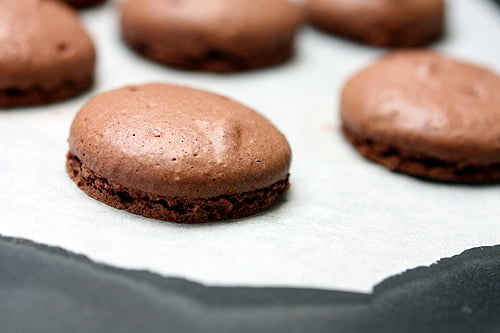 Determined, another batch followed. I took the advisement of Pierre Hermé who says to begin baking macarons at a very high temperature, then turn it down quickly. That caused all the macarons to crack (ouch!) which I knew could be alleviated by using double-baking sheets but I didn’t feel like trying it again and washing all those dishes.

Anyhow, to make a long story short(er), here’s the successful recipe I came up with after seven tries, which are perfect. You can choose from either filling.

Adapted from The Sweet Life in Paris (Broadway) by David Lebovitz

To make the prune filling:

To make the chocolate filling: