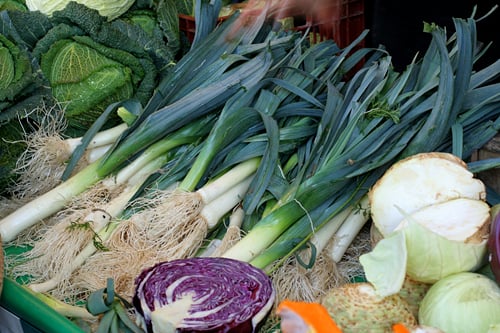 When I lived in America, it was rare to find leeks. Some of you out there in the states are probably thinking; “Leeks? Aren’t those the fancy onion-like things at the supermarket that look like overgrown scallions?” Well, yes. 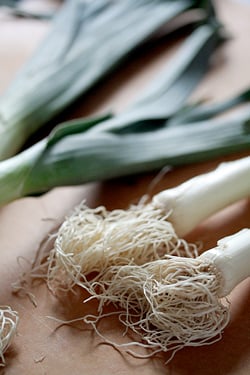 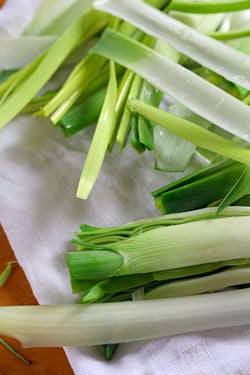 They may cost more than yellow onions, depending on where you live. But here in France, leeks are cheap and plentiful. And used often. When I told Romain that leeks weren’t widely-used in America, he was really surprised, since even the humblest produce vendor sells leeks and just about everyone at my market seems to have a few sticking out of their market basket. 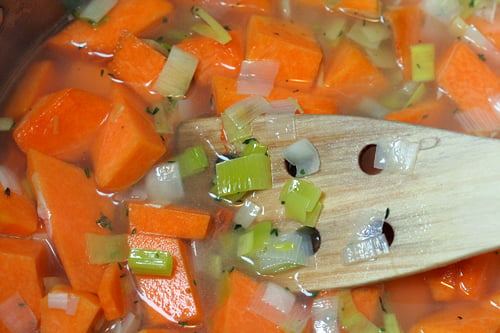 Anyhow, we Americans do have our green onions (or scallions, as they’re sometimes called) and we use them a lot. They’re cheap, often just two or three bunches cost a buck, but they’re almost impossible to find in France. I think it’s perhaps because we use them raw quite a bit and the harsh taste might be a bit overwhelming. You don’t see too raw onions being served in France as much as you do in the states.

Some people may find leeks intimidating, but I’ve started using them a lot more since I’ve moved to France and love their sweet, mellow taste, and use them much more than yellow onions in my cooking. They do require a bit more preparation, but you don’t have to deal with those papery skins flying all over your kitchen, which I think is a pretty decent trade-off.

The best way to cook leeks is to “sweat” them, which means cooking them in butter and/or oil over pretty low heat until they get soft, but not browned. The French call this fondu, or “melted.” I use part butter, part olive oil, because although the butter adds a wonderful flavor, it can burn if cooked for a long time. So using some oil helps. If you have clarified butter, you could use that, but I don’t keep that on hand.

How To Prepare Leeks 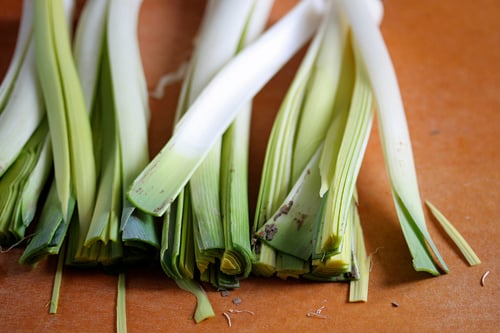 1. To prepare leeks, cut off and discard the dark green parts that are tough. Or you can wash and use them for stock-making.

2. Trim off the little beards at the bottom.

3. Take a chef’s knife and made a horizontal slice lengthwise. Don’t cut through the end, where the beard was, though. Rotate the leek, and make another lengthwise slice, creating a cross-hatch patter if looking at it from the cut end. 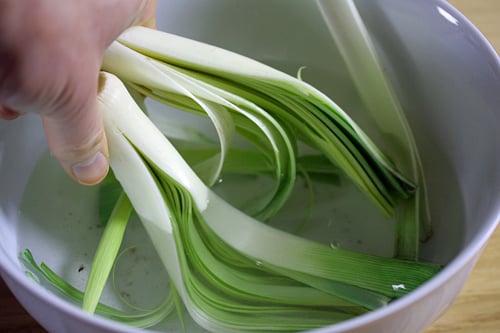 4. Run the leeks under cold water, or better yet, swirl them around in a basin of water to remove any grit. Some leeks are really dirty and others are pretty clean. So you may need to rinse them in a few changes of water.

(Another technique it to cut the leek into pieces first, and swirl them in water to remove the grit, then drain them well.) 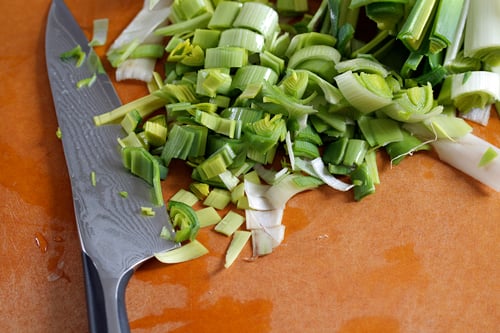 5. Afterward, towel-dry the leeks and cut them into rounds. 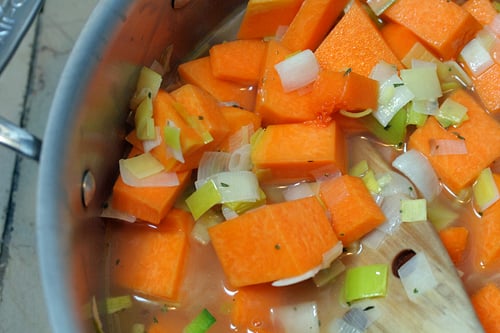 I use leeks as a base for soup and braises and once you do, you’ll find your foods have much more flavor for just a little extra work.