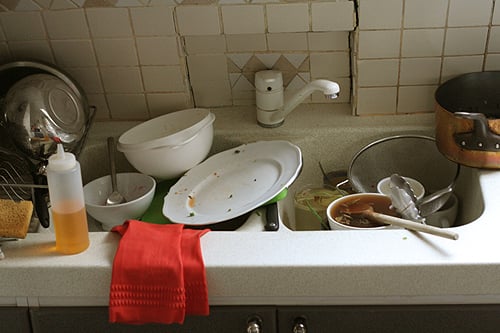 Even though I live in a small apartment, I’m not especially good at keeping it tidy. I’m fairly neat and organized, which is essential when living and working in the same space. But I’d rather spend my time baking brownies than scrubbing sinks, if you can believe it.

Jeanne is my housecleaner and she comes every other week. (Except during her eleven-week summer vacation.) The first time we met, she strode in the front door for her interview, and immediately said to me, “Je ne suis pas une voleuse, monsieur”—”I am not a thief.”

I was sure she was telling the truth, since she was better dressed than I. She arrived wearing a silk scarf tied impeccably around her neck and strode through my door in elegant leather pumps. The flowery lilt of French perfume wafted towards me as she entered, and her hair was so neatly-coiffed and sprayed into place that a mistral, the violent wind that sweeps through Provence, wouldn’t have been able to budge it.

Being from San Francisco, I did the brief Adam’s-apple check and yes indeed, Jeanne was the real thing.

But lest you think Jeanne was dainty and sweet, think again. The first time she came to clean, she kicked off those fancy shoes, put on her slippers, and padded off in search of the eau de javel, that universally-loved liquid developed here in 1789 that’s still very dear to the French to this day.

In fact, they’re still beaming with so much pride that they’ve named a métro stop after it, called “Javel.” Imagine if there was a subway stop in your city called “Bleach.”

It’s one of the few métro stops in Paris I’ve never been to—but I presume it’s the cleanest.

Because my apartment is just two rooms, you’d think it would be simple to clean. When we first met, Jeanne originally said it would take her two hours to do it, which sounded like quite a long time. But since it takes me about two weeks to work up the energy to unearth and untangle all those cords and hoses on my aspirateur (I always manage to find something more interesting to do in Paris than vacuuming), I went along with it. During her first visit I left and went to the cinema.

When the movie was over and two hours had passed, I figured she’d have finished up and it was safe to return. When I turned the key in the lock, the door swung open and there she was, still padding around, engulfed in fumes of bleach. Although she’d been there way past her estimated time of departure, she was cleaning around the buttons on my fax machine like a madwoman…but hadn’t yet made it to the kitchen or the bathroom.

I hung around and tried to stay out of her way, and when she finished, I suggested that the next time she came, it might be better if she started in the “critical areas”, namely the bathroom and kitchen—instead of detailing le fax. Jeanne slipped back into her pumps, neatly folded her rubber gloves, and finally left a good four hours after she had arrived.

Since our first encounter, we’ve been together for years and Jeanne’s become a fixture in my life. So much so, that I’ve slipped from using the more formal vous to the friendlier tu with her. Although she still uses vous, I guess she feels pretty comfortable with me, since each time she arrives, she scrutinizes my face very deeply and tells me she’s worried about my health. She says I should be eating more red meat, a diagnosis that she brings home by vigorously punching her fist in the air. I want to tell her, thanks—now could she just clean the toilet? But I’m worried about that well-manicured right-hand jab, so I don’t say a word.

I’ve finally got her down to cleaning my tiny place in 2 hours and forty-five minutes, a feat that’s taken me several years to accomplish. I couldn’t tell her outright to leave, so I come home and feign surprise each time that she’s still there, praying that she might get the hint. That’s after I’ve sat through War & Peace, stopped somewhere afterwards for a glass of wine, then wandered aimlessly in the freezing rain until I thought, “Of course, she must be finished by now” hoping to be allowed back into my home again. But lo and behold, no matter what time I return, there she is. Bleach in hand, scrubbing the rubber bumpers under the base of my KitchenAid mixer.

But I’m not complaining.

True to her word, nothings gone missing and I’m happy with the great cleaning job that she does…in spite of the small fortune I’m spending on bleach. My next task is to convince her that I participate in this new-fangled thing called “recycling.”

Still, I can’t imagine life without Jeanne and I’d miss our bi-weekly sessions of her doling out health advice, and me wishing she’d concentrate her energy on the kitchen floor instead of detailing the plastic holes behind my alarm clock. 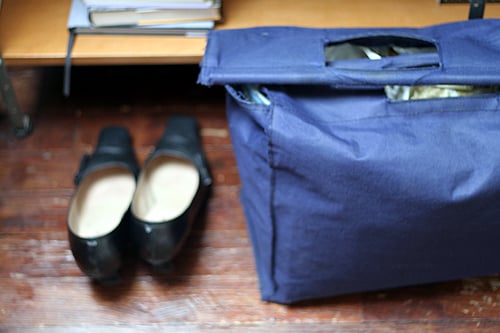 Oddly, one day I came home and she’d already left, which was a first. She left a note that she was missing a sock and if I found it to please let her know.

I looked under the shelves, where there was not a speck of dust. I moved a few boxes around and saw the walls and corners had been scrubbed and polished. I lifted up the sofa, and the carpet looked as fresh as that day I installed it. But no sock.

Feeling the need to stop in the bathroom, something struck me as odd: I looked around and noticed that it hadn’t been cleaned.

I don’t know what she’d been doing and how someone could spend half-a-day cleaning a two-room apartment but forget the bathroom. Yet I was happy to forgive her. Because when you’re all alone in a foreign country, it’s nice to have someone looking after you. And I think it’s a good idea to keep her on my side.