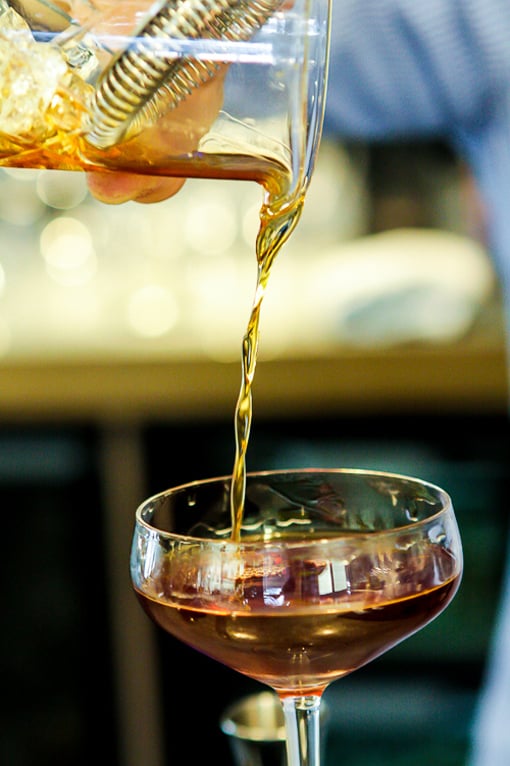 This weekend, I think I just made my twentieth, and last, visit of the year to La Maison du Whisky. For the life of me, I have no idea what prompted me to go to a liquor store the Saturday before Christmas. Well, actually I do. 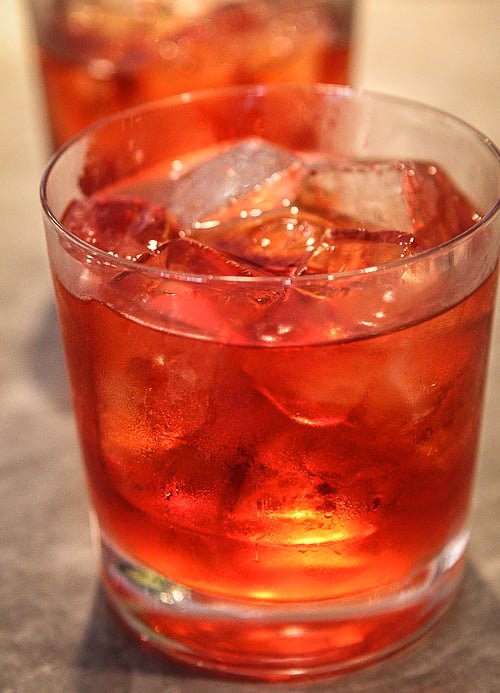 I was preparing to refill one of my empty cocktail aging barrels and the next cocktail on the docket required red (sweet) vermouth. After exhausting the three liquor stores in my neighborhood, who had no idea what I was talking about (although one caviste thanked me for illuminating him, which I thought was odd because I know very little about vermouth), I took a very crowded #96 bus over to the Left Bank to stock up on a few bottles. 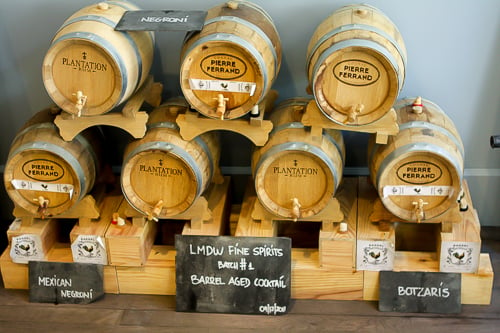 The bus was really packed and although I did appreciate being privy to the conversation of the young, twenty-something woman next to me, having a very vocal chat on her mobile phone that was about, well – nothing, I ended up walking 1 1/2 hours back home, after my liquor shopping, because you couldn’t have slid a centime into the return bus that pulled up. (The walk through gray, wintery Paris was beautiful – and it was especially nice not to have the running commentary of a twenty-something to accompany it.) 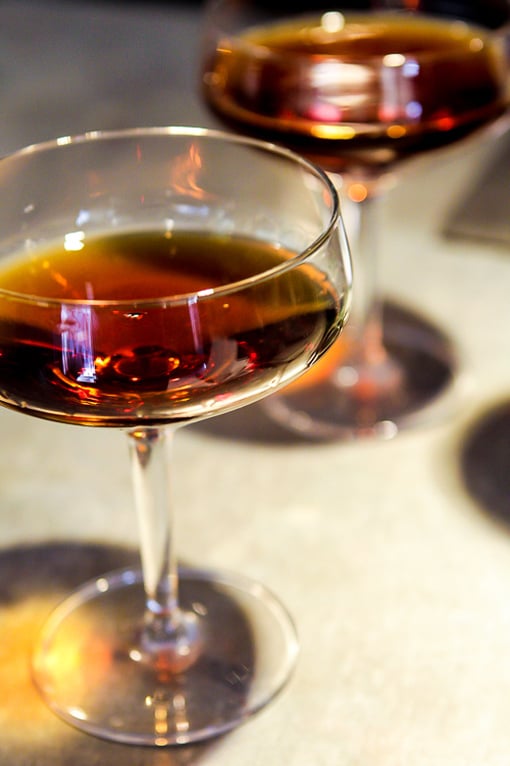 I’ve become a bit of a fan of the shop because in addition to things like vermouth rouge, they also carry those fairly obscure French liqueurs that are back in fashion elsewhere, but are hard to find on their home turf. On each visit, I usually find something that I’d never heard of, and it’s always interesting to wander around the shop and check out the curiosities, like Acqua di Cedro, an Italian distillation of citron fruits, or King’s Ginger, a liqueur made in Holland whose bottle says it is “…appreciated by bon viveurs, sporting gentlemen and high-spirited ladies.” Who, coincidentially, are just the kind of people that I usually hang out with. 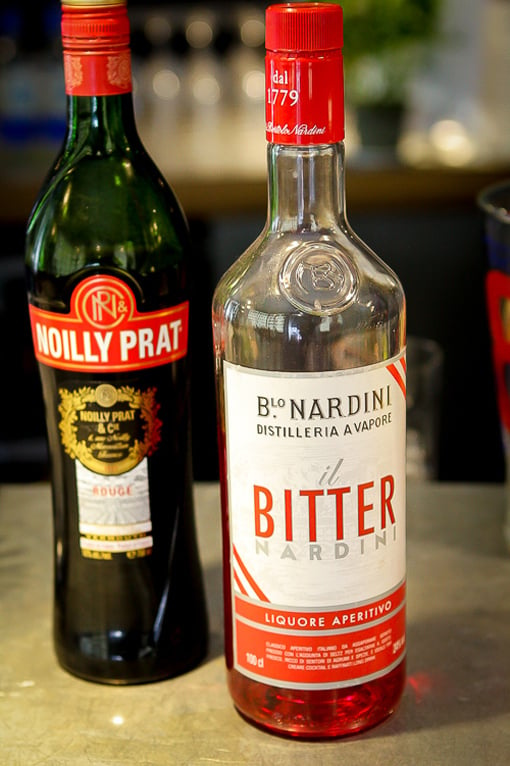 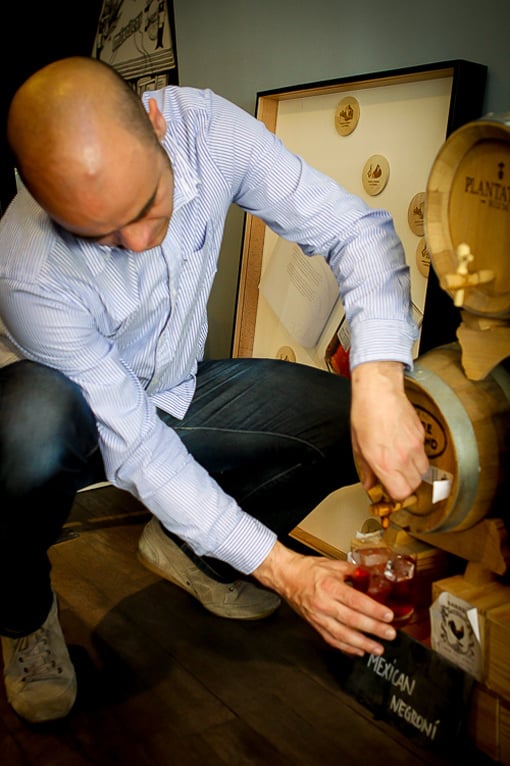 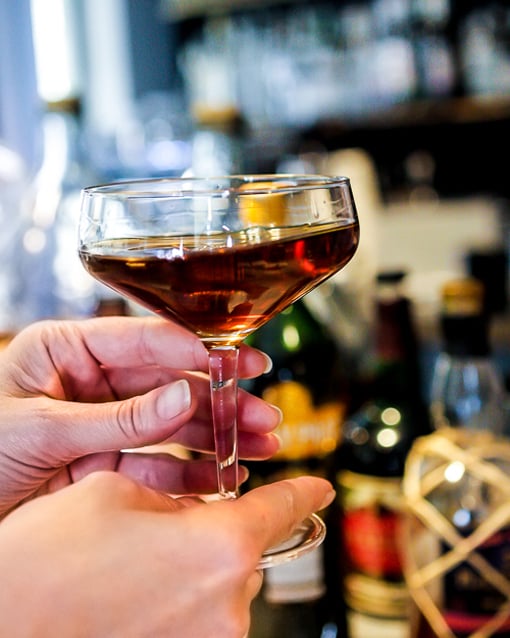 Maybe it’s just that it’s taken me a few months to sober up (or I’m still recovering from the bus ride), but I’m finally getting around to sorting through a tasting of aged cocktails that I took part of at La Maison du Whisky a few months back. It wasn’t a formal tasting; I’d expressed an interest in learning more about barrel-aged cocktails and Stanislas Jouenne, who mixes cocktails and teaches the art of mixology at the store, was kind enough to shake up a few drinks for me and my friend Forest. 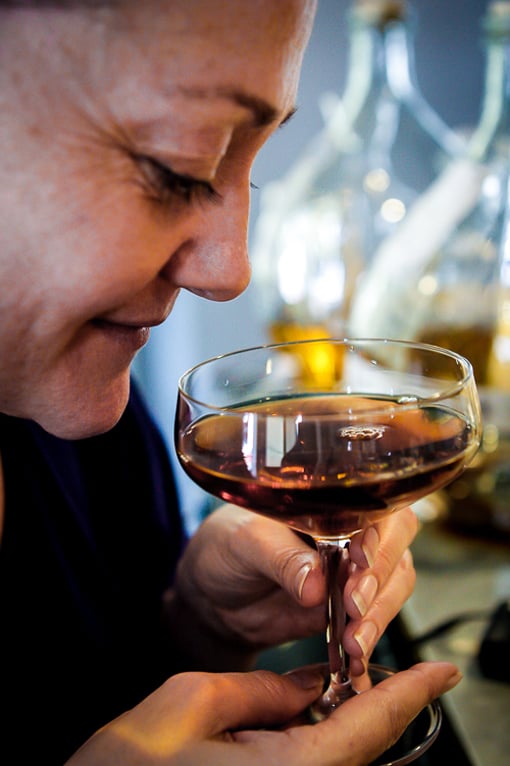 (They do have frequent tastings, so you can stop in and try something new.) 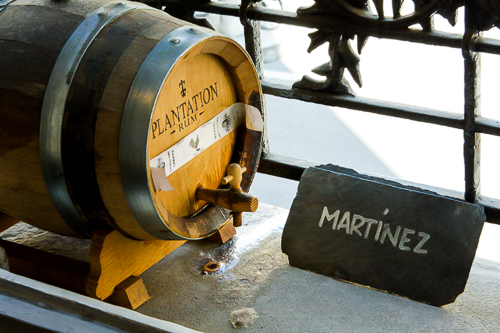 If you pass by the shop near the Place de l’Odeon, you’ve likely been fascinated by the window with bottles of interesting and curious French (and other) liqueurs and apéritifs lined up in the window. But if you look up, resting on the balconies, you’ll see barrels perched on the balconies, where cocktails are left to age for months. 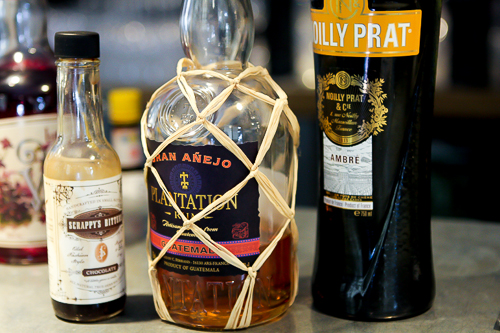 I’ve been considering taking one of the bartending courses at the shop, especially the one in how to make bitter and syrups (which I didn’t see listed on their current roster), and Stan (as he’s often known) showed me some of the herbs and roots – like star anise, angelica root, and cinnamon – that he uses from a local herboriste. 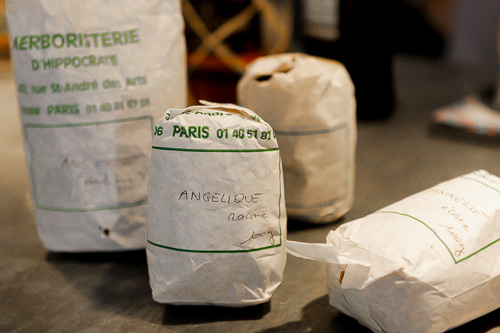 It’s something I’ve truly been meaning to tackle myself, but for those non-DIY types, there are various types of bitters on hand that add a beguiling complexity to cocktails, including those flavored with cardamom, coriander, tarragon, and chocolate. 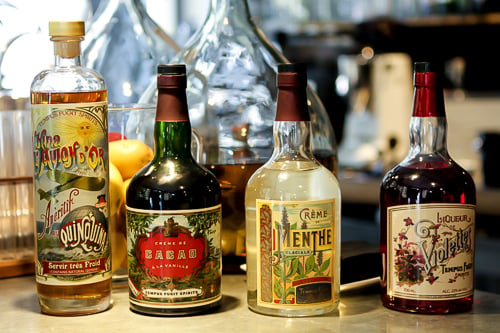 Because of the worldwide interest in cocktails and “vintage” liqueurs, companies like Tempus Fugit Spirits has been reviving a few of these forgotten flavors, with versions of liqueurs crafted in Switzerland, that contain quinine (a bitter root), a natural violet liqueur that’s a far cry from the overly sweet purple liquids one usually finds, and crème de cacao, distilled from cocoa beans and pods of vanilla. 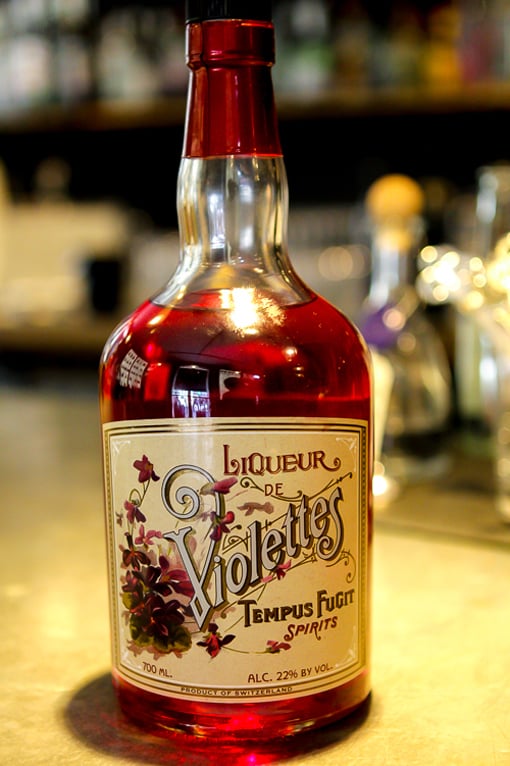 Years ago I did a tasting of absinthe with John, the owner of Tempus Fugit and when I took a sip from one of the glasses, a big splash of absinthe landed squarely in my eye. “That’s why we call that the ‘money shot’ glass” he laughed, which made me glad of my present career, where I’m more likely to get hit in the eye with buttercream than anything else.

Bitter aperitivos from Italy also play an important role in cocktail-making, at least to me (I love a bit of bitter in a drink) and many of the aged cocktails in the shop have a dash of bitters, such as amaro or Nardini bitter, which is made with rhubarb, absinthe herbs, and sour orange, to give the cocktails a bit of an edge. 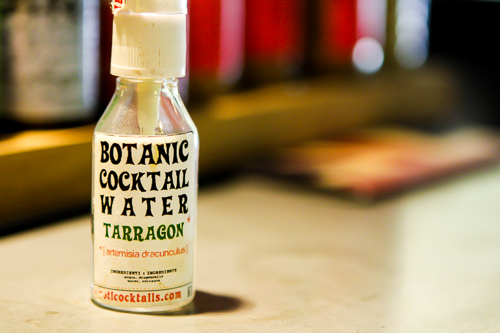 We tasted some of the house inventions, such as a Mexican Negroni, made with Red Noilly Prat, Nardini bitter, tequila bianco, and a shot of mezcal. Sipping one that was freshly made versus one that had been barrel-aged for six months revealed how a leisurely wait in a barrel really mellows out a cocktail. 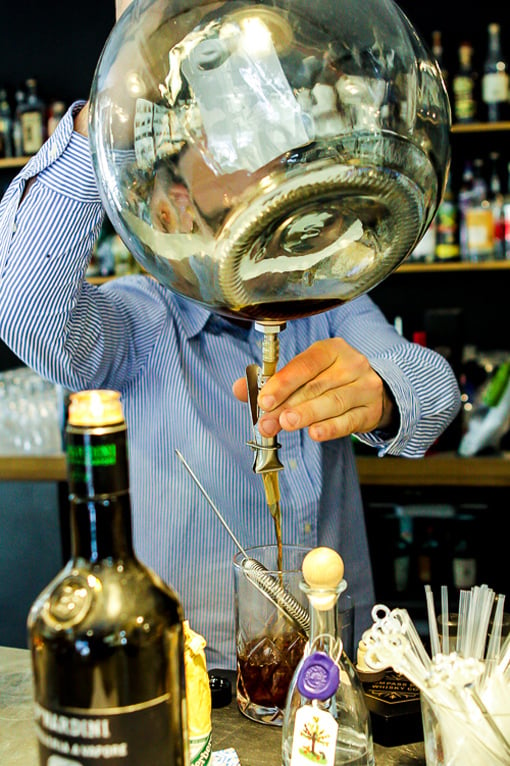 And as we found out, it mellows out those who drink them, too! 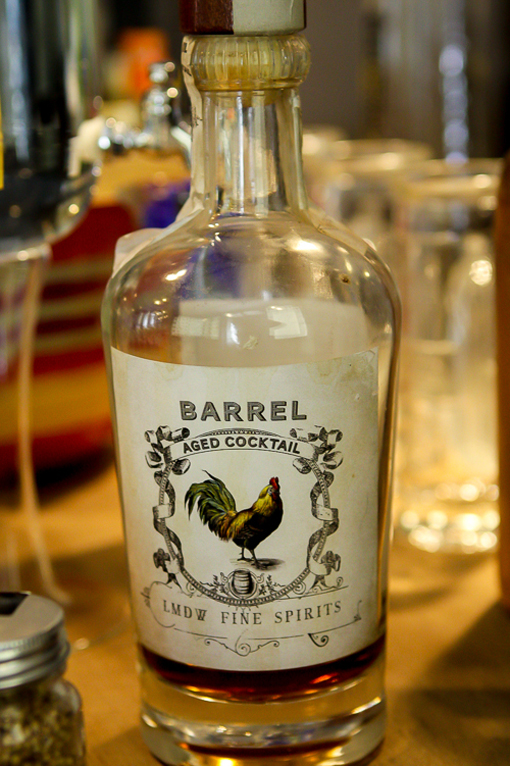 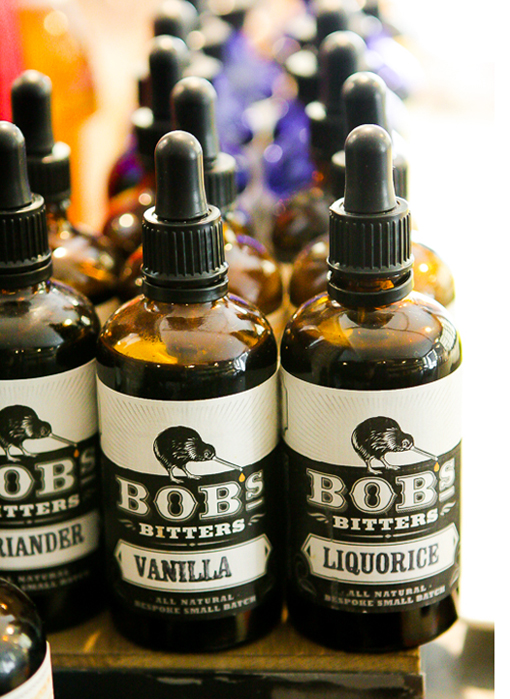 There was also a Rum’Tam, made with rum, Noilly Prat gold and chocolate bitters, which curiously, was more interesting fresh than aged. (The aged was a bit too refined and it had mellowed quite a bit.) 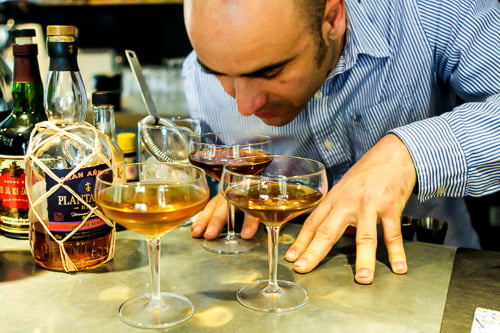 For those who can’t wait, the shop bottles them up and you can head in and pick up a bottle of already aged cocktails, such as Botzaris, made with Ferrand cognac, Rittenhouse rye, and cardamom bitters. (Mis en fût is the date that it was placed in the barrel, and mise en bouteille is the date that it was bottled – so this one shown was aged for about eight months.) 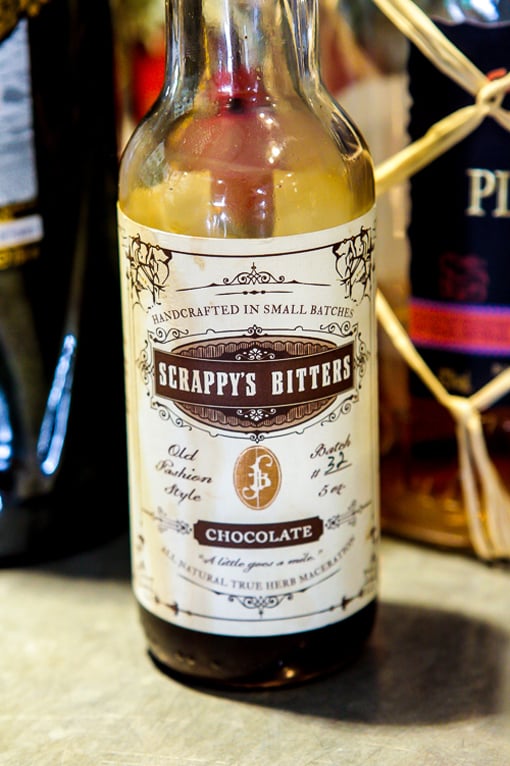 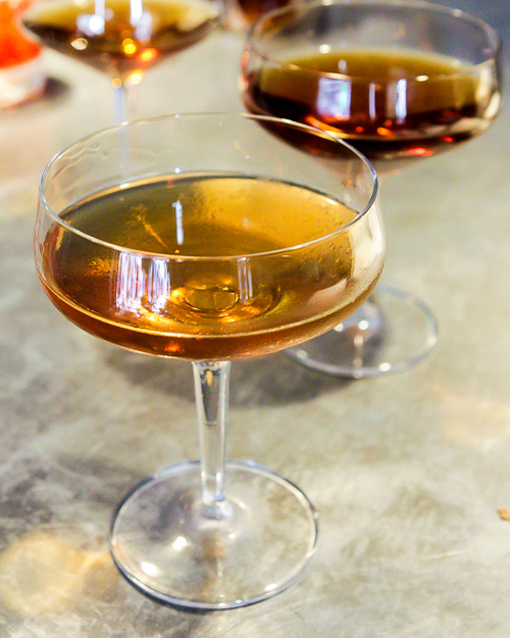 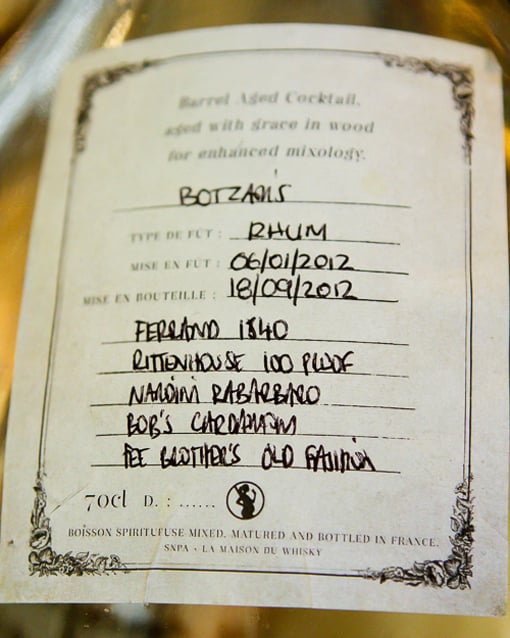 I have to say, patrolling the store, I usually leave there with an extra bottle or two of something interesting to mix up at home. (Even if I’m walking home and have to lug them over my shoulder!) And now, my cocktail barrels on my kitchen counter are back to being full. But I don’t dare leave mine outside – I think they’re be swiped in a New York, or Paris, minute. So I’m keeping mine safely inside. Where I can keep an eye on them. 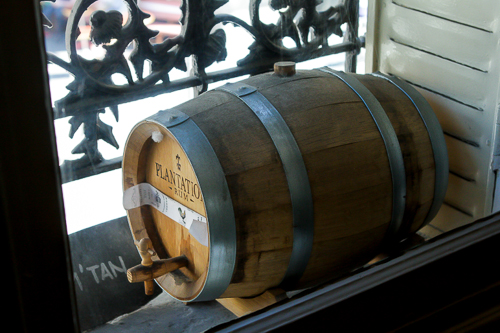