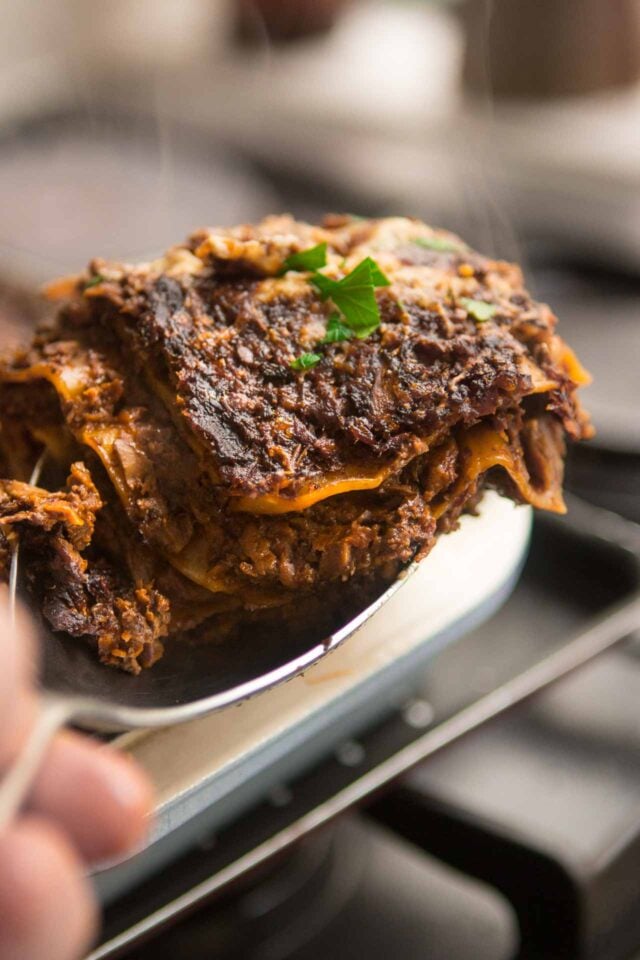 When the very first Ottolenghi book came out, I had no idea what this mysterious restaurant, or person, was. But I was immediately captivated by the spectacular salads, cakes, vegetables, flatbreads, and more piled up on tables at Ottolenghi. The pictures in the book had a vibrancy that I’d not seen in any other cookbook before; mounds of vibrant-green fresh herbs piled atop salads, charred vegetables and lavish use of tahini (which I narrowly once thought was only used to make hummus), and plum-marzipan cakes with the rosy, glistening fruit juices sliding off the top and pooling at the bottom. Wow.

We’ve since seen that style in plenty of other books, but the Ottolenghi books continue to evolve and each one marks another evolution in Yotam Ottolenghi’s cooking. And even when you don’t think he could come up with another great idea, he does. 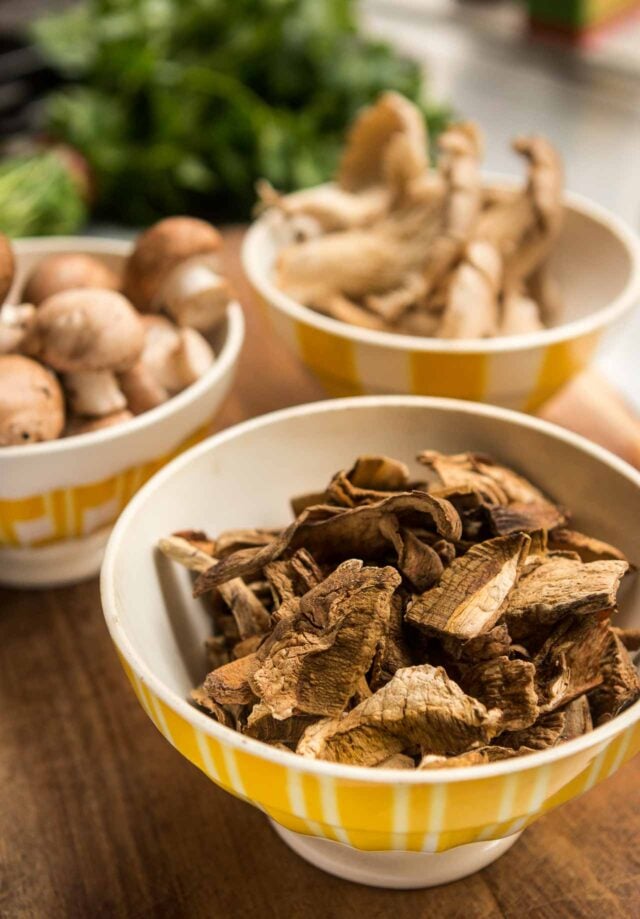 Flavor is Yotam Ottlenghi’s latest book which he’s written with Ixta Belfrage. The title refers to the concept of the book, which is about how (and which) ingredients can be used to amplify flavors when cooking and baking. Ixta had a multicultural upbringing and she’s brought references and flavors from around the world in this book, which includes this Spicy Mushroom Lasagna. The recipe features dried and fresh mushrooms, as well as dried chiles, likely influenced by Mexico where she spent time with her grandfather, who lived there. The photo of it in the book made me want to make it. So I did! 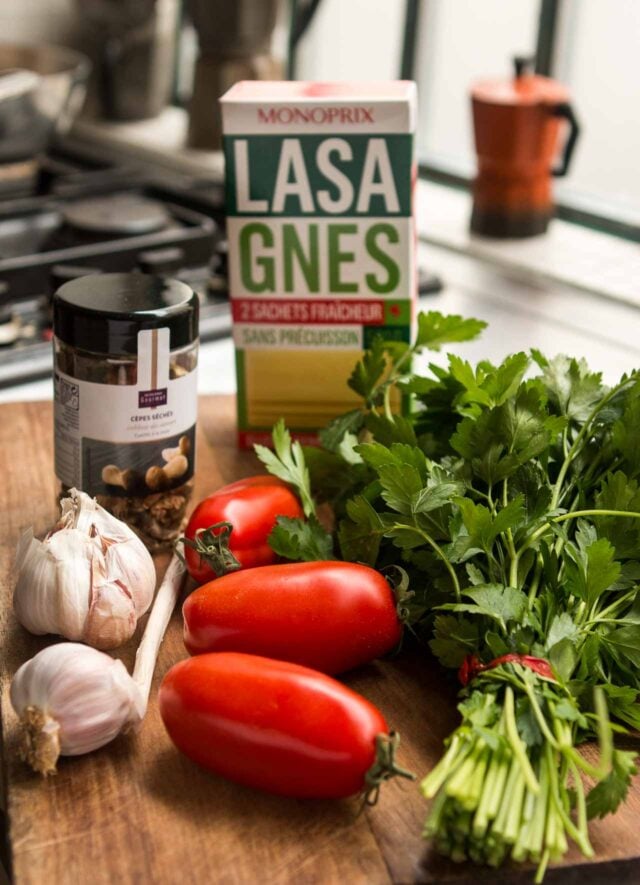 The “get to the recipe” folks might want to make good use of their thumbs to scroll down to the recipe, but I’m not going to lie to you. I picked one of the more challenging recipes from the book, although the easier-looking the Iceberg Lettuce Salad with Smoky Eggplant Cream (page 38), Za’atar Cacio e Pepe (page 104), Broccolini with Mushroom Ketchup and Nori (page 227), and the Tangerine and Ancho Chili Flan (page 278, which I think is next…) also have my name on them. But first, I needed to tackle this lasagna. 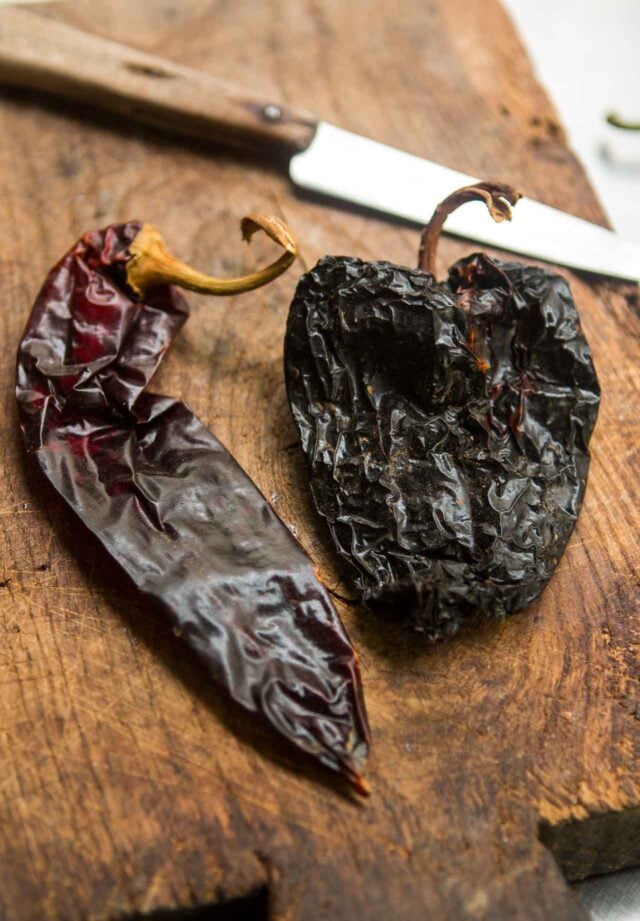 Fortunately, I keep a big stock of dried chiles on hand, but went on a scavenger hunt around town before our current lockdown, getting the ingredients, hitting supermarkets, the outdoor market, and the Italian épicerie, to gather everything else I needed. The dried mushrooms were the biggest challenge, which I located at Monoprix; three canisters for €13 ($15.)

My heart skipped a beat when I first saw the dried morels on the same shelf, which were four times the price, but was relieved to see the dried cèpes next to them. It seemed a lot to shell out for just one ingredient but reasoned that when we go out to dinner, a main course usually runs at least €15-20, and a bottle of wine more than that. And honestly, a chicken for roasting at home costs at least that. So why am I balking at spending €13 for a recipe that feeds six? 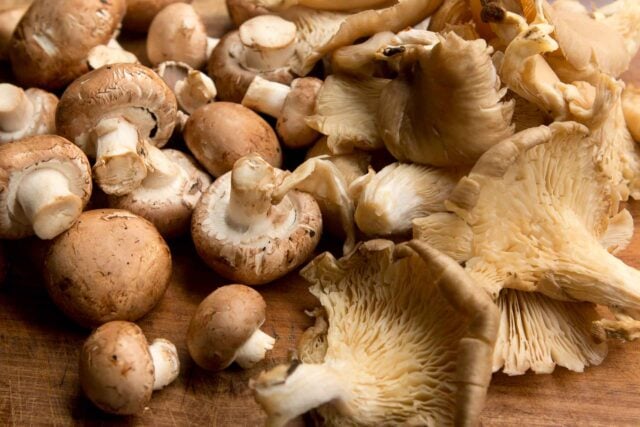 The other ingredients were easy to find, and easier on the wallet, with the possible exception of the oyster mushrooms, called pleurottes in French. Those ran about €6 ($7), but still, I was feeding my two favorite people – me and Romain – so why not? 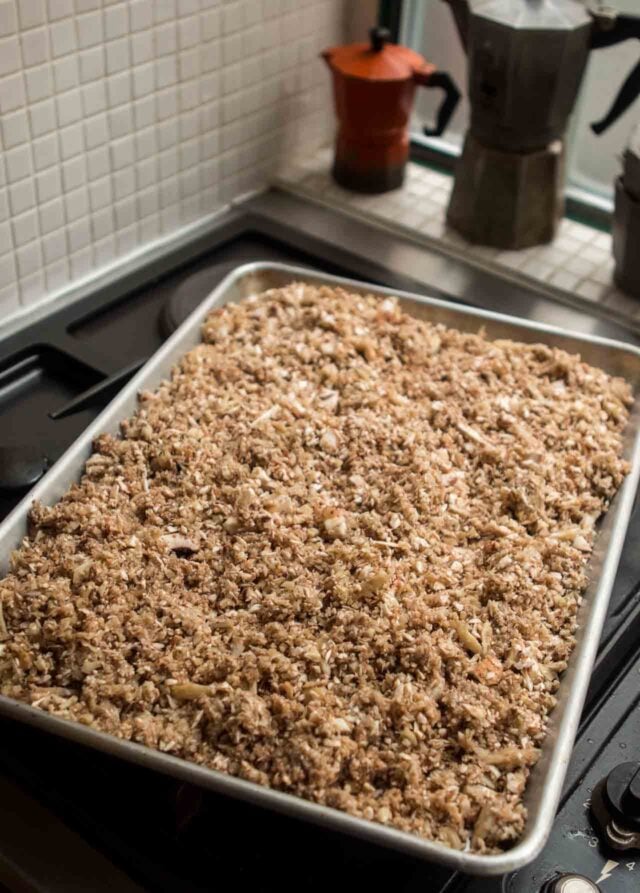 Okay, back home, and on to the recipe: The outline of it is that you make a mushroom ragù. Usually made with meat, since all the recipes in Flavor are vegetarian or vegan, the fresh mushrooms replace the meat, and the dried mushrooms along with their soaking liquid provides a savory richness to the sauce. The generous pile of mushrooms cooks down a lot in the oven, and while I was skeptical when I put the overloaded baking sheet in there to cook, around thirty minutes later, and a few good stirs, they were indeed cooked down to a near crisp. 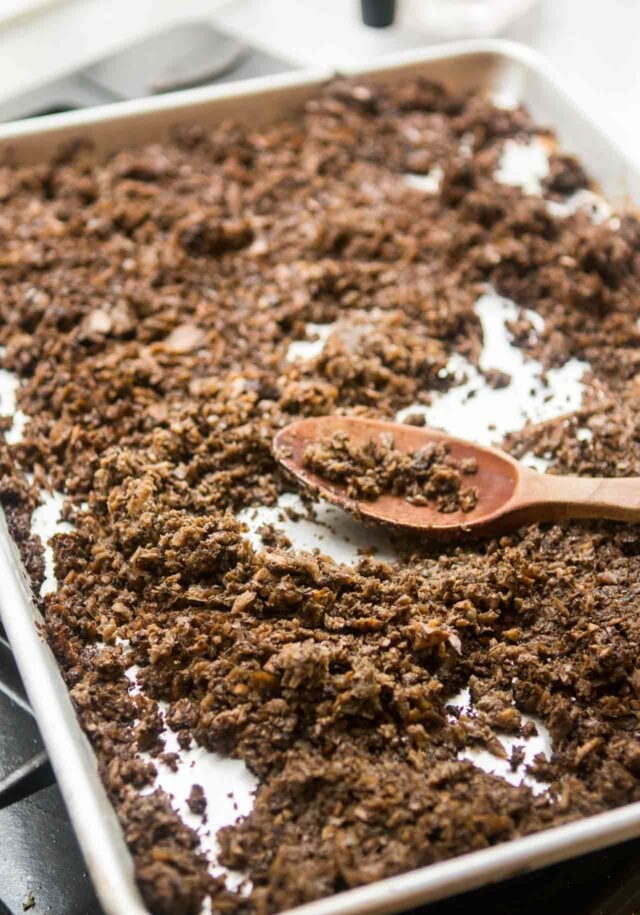 Separately, in a large skillet or Dutch oven, you make a thick stew or ragù starting with a base of onions, carrots, and garlic, then add fresh tomatoes and tomato paste, then chopped dried mushrooms and chiles, and their soaking liquid, as well as the roasted mushrooms and cook until thickened. It gets a good splash of cream (which is optional) and a few more good stirs on the heat until it’s a thick sauce. Sounds easy, right? 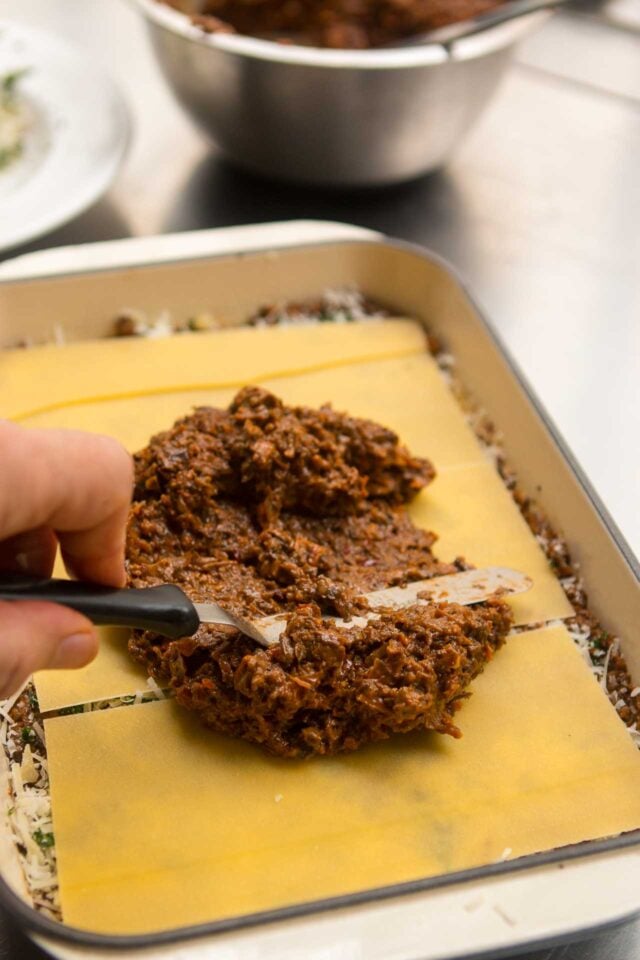 Yotam and Ixta are ace recipe writers but I took it upon myself to recast the recipe order a little, since I’m not the sharpest knife in the drawer. Before you start, I recommend getting all the ingredients measured out and together on the counter, what’s called a mise en place, before starting to assemble the lasagna. 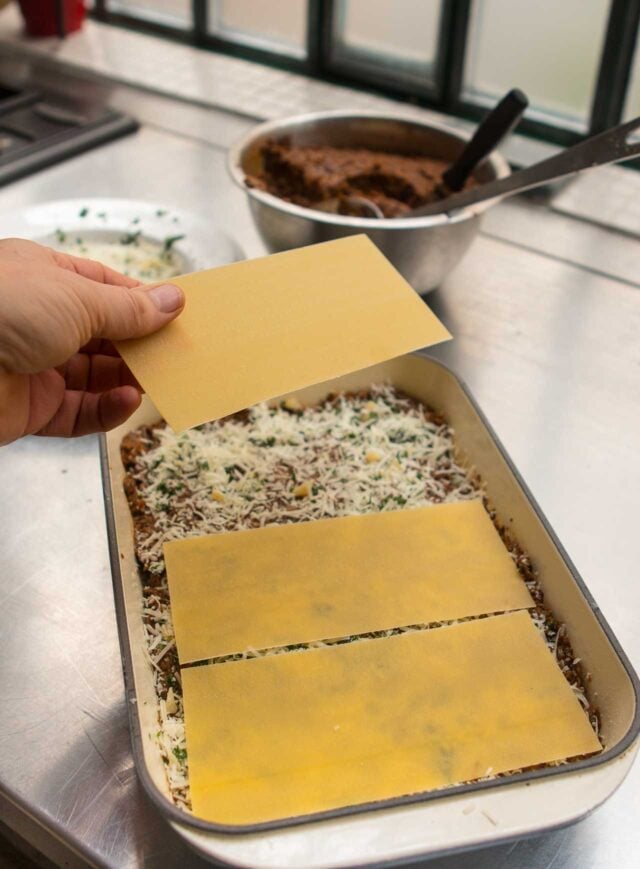 I recommend doing that because I made a goof in the order of things when I made this, but in the end, everything ended up in the same skillet. It’s just food and it’s all going to the same place. 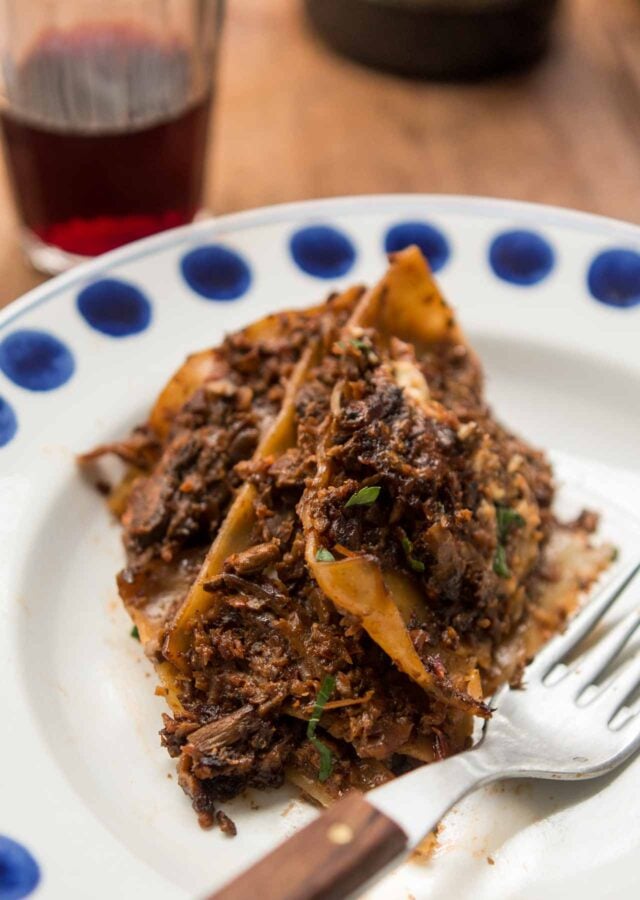 No-boil noodles I’ve learned are the norm here and that’s what they use in the book. They absorb some of the liquid while baking. I didn’t find this lasagne dry but if your mushroom ragù is a little more liquidy than mine, I think that’s a good thing.  I’ve added additional notes in the recipe and the in headnote but I have to say, Romain absolutely swooned over this, and so did I. It truly lives up to the title of the book and is packed with flavor.

Adapted from Flavor by Yotam Ottolenghi and Ixta BelfrageThe lasagna uses fresh brown button mushrooms (chestnut mushrooms) and oyster mushrooms, as well as dried mushrooms. It's a vegetarian recipe that everyone will love, and can easily be made vegan, too.It does require a little extra shopping than most recipes, and involves a few steps to assemble. I recast it a bit and here are some tips that'll help you:-The original recipe called for both dried porcini (90g) and dried wild mushrooms (30g) but I went with 2 1/2 ounces (70g) of dried cèpes. Feel free to use the original mix the recipe calls for.-If oyster mushrooms aren't available or aren't in your budget, try using a mix of other fresh mushrooms, like brown and white button mushrooms, or using some portobellos. -If you can't get both Parmesan and Pecorino Romano cheese, or don't want to buy both, you could use 4 1/4 ounces (120g) total, of one or the other.-If fresh basil isn't available, feel free to use another aromatic leafy fresh herb, such as tarragon, chives, or dill. -I used a Guijillo and pasilla dried pepper for the two dried peppers called for. You can use whatever dried peppers you like, according to your tolerance for heat. If you don't have dried peppers, add a few chopped fresh chiles to the onion, garlic, and carrot mixture. Once again, let your tolerance be your guide when choosing chiles as to how spicy you want it. Yotam and Ixta say they can be omitted if you're feeding kids, or people who don't like spicy foods. -Because the book is vegetarian, the recipe calls for vegetable stock. Although I'm not normally a fan of bouillon cubes, natural foods stores carry cubes of vegetable stock, which are fine. (I used something similar here.) You could try diluted chicken stock, equal parts water and chicken stock, or just water. If you do try one of those, let us know how they work in the comments.-Don't eat dairy? Yotam and Ixta say this lasagna can be made without the cream and cheese. And speaking of cream, I am nearly certain this recipe would work with whole milk in the ragù since that's traditional to add to ragù sauces like this. I am going to try that next time. Another option is plant-based "milk," such as almond or oat drink.-I added a little fish sauce to the mushroom ragù to highlight savory flavor. You can use soy sauce, or omit it if you wish.-I was cooking from the UK edition of the book, and converted the recipe from the fan-assisted convection oven baking times and temperatures used in the UK edition. If using a convection oven, you may wish to consult the book for precise temperatures. The recipe takes a little time to assemble so suggest you get all the ingredients prepared and laid out in advance before tackling it. A do-ahead tip is to make the recipe up to finishing the ragù in step 5, and do the final assembly a day or two later.
Course Main Course
Servings 6 servings 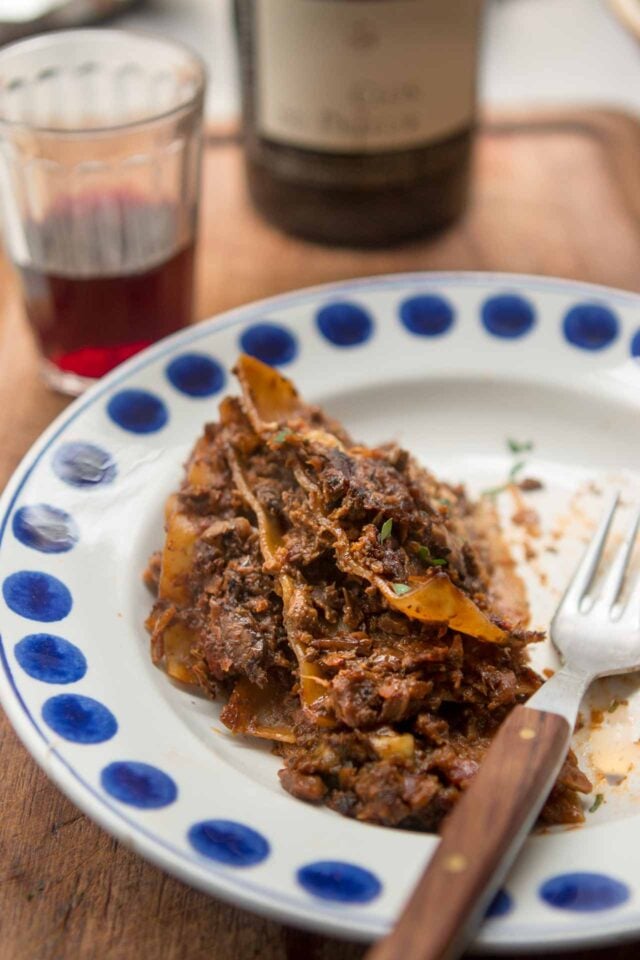