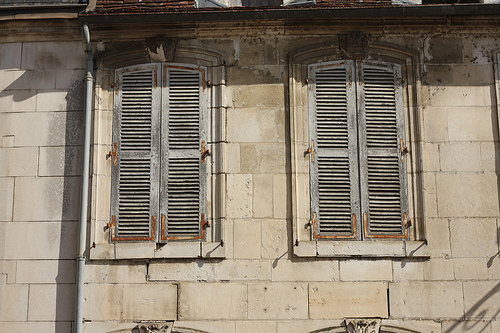 I had no idea my mother was French because wherever she sat in a restaurant or – well, anywhere – no mater what the season, there was invariably a courant d’air, or a draft. For all the years I lived in San Francisco, I never really though about winds, drafts, or too much air movement nowadays. Especially since, as anyone who’s lived in a San Francisco Victorian house knows, if you don’t want to sit in a drafty house, you’ll have to move to another city. One that isn’t essentially an ongoing, ever-present, courant d’air.

It’s quite a contrast to the city where I now live, Paris, where doors and windows are closed most of the year due to the weather. But come summer, when the temperatures rise to sometimes hazardous conditions, the outdoors is an enemy and windows are kept closed to protect ourselves from – well, I haven’t quite figured out what. But in a curious paradox, people flock to the outdoors, especially to the café terraces – and not just because they can smoke there – but to soak up any precious bit of sunshine that we’ve been missing for the past 10 months. And probably because their apartments are so hot because all the windows are closed. 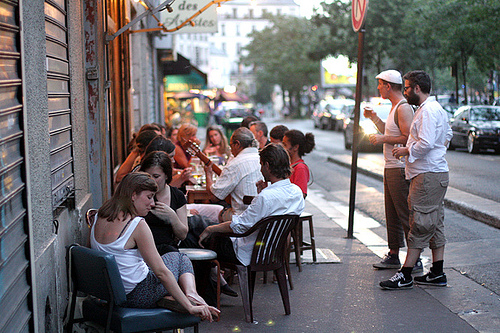 All of this is relatively new to me. But since living in a top-floor chambre de bonne for many years, right under a zinc roof that was hotter than en enfer, I’ve learned that during periods of intense sunshine bearing down, closing the windows can keep the inside of a building cooler. But when the sun isn’t bearing down and there is a cooling breeze flowing? Open ’em up, folks! I went into a shop that I like during the heat wave last week and the owner was sitting behind his desk in the sweltering heat, with a smoldering sheen of perspiration on his brow.

The place was hotter than a smoldering inferno, and frankly, I don’t know how he was able to sit there because I was in there no more than 12 seconds and nearly stopped being able to breathe. The door and windows were tightly closed and before I left, I suggested maybe crack a window or leave the door open. (Which might actually lead to more customers coming in, and him selling something. But that’s a subject for a whole other post…) “Non, non! That will let the hot air in!” I didn’t mean to contradict him, but I mentioned that the hot air had – indeed – already gotten in. 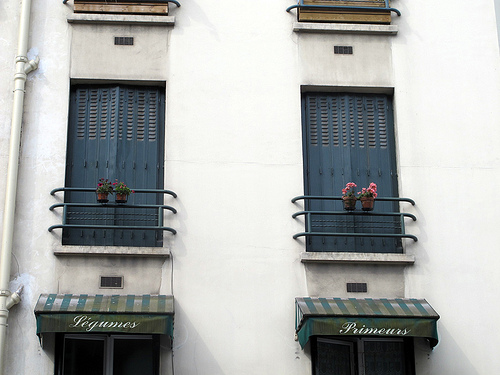 Visitors not used to the closed-door and window policies are often sweltering in restaurants, in stores, on public transit, and in buildings, which aren’t ventilated. Maybe that’s how the French allegedly stay so thin – because they are constantly sweating it off? But I have a backlog of shopping to do, which I’m holding off on ’til October, or perhaps November.

The fear of fresh air could be the result of ancient fears of air-born diseases. Malaria, which is probably derived from mal (bad) air (air) is just one example of its dangers, even though it’s caused by mosquitos. But old habits die hard and plagues and so forth had been passed around by air, so there’s likely a certain amount of holdover from the Middle Ages. Which, arguably, happened ages ago. 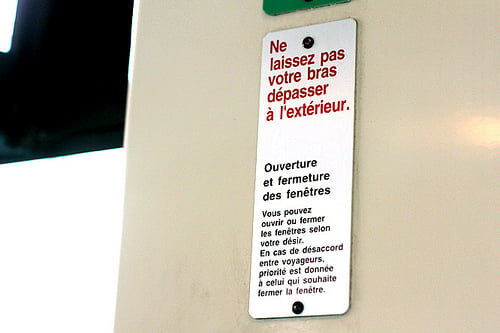 And as smart people now know, diseases are passed around by people sneezing into their hands then grabbing the bars on the métro. To mitigate the dangers of les courants d’air, even though we live in a society ruled by égalité, priority treatment is given to people who like the windows shut: On the buses, there are notices that the windows can be opened. But if someone complains, they take priority, and they must be closed.

The other night I was at a dinner party. The temperature was a lovely 82ºF (27ºC) and there was just a gentle breeze in the air, a truly welcome relief after the intense heat during the day. In other words, it was the perfect summer night. As we sat down to eat, the hostess, who was dressed in long sleeves and wearing a scarf, went over to close the windows which overlooked the tree-lined boulevard.

A few minutes later, I started to realize that I couldn’t breath. I don’t smoke, nor do I have any respiratory problems. But I could feel myself about to pass out. I don’t know how the others were able to sit and continue through dinner, but I politely excused myself, went into the other room, and leaned out the open window to take a few deep breaths, which made me feel better. Paradoxically, I was getting sick from a lack of air. 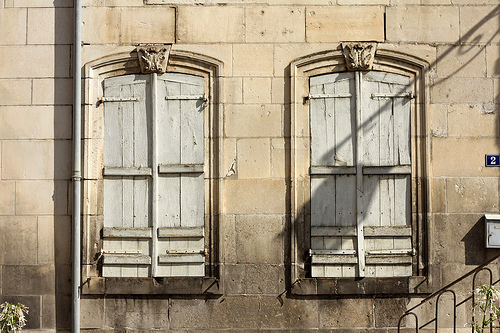 But in spite of the official reluctance, I think I’m on my way to becoming my French mother’s son. After a yoga class, it was time to lie down after the workout, and time to pat myself on the back for a job well-done. (Well, I would if I could. But since I’m hardly flexible enough to touch my toes, patting myself on the back is kind of out of the question.)

It was then that I felt a coolish breeze come over me, courtesy of a nearby open window, and I found myself waving my hand in space, looking for the source of the courant d’air. I was going to say something to the teacher, but I couldn’t bring myself to mouth the words. So I stayed there, lying in stillness, worrying about what maladies I was being exposed to. Which was the only thing keeping me from drifting off into bliss.