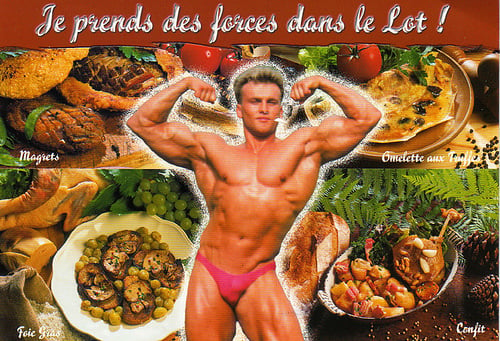 If you want to live in France, you need to get used to people speaking their mind.

Years ago when I was young and supple, I’d eat whatever I could get my hands on. And working in a restaurant, well, let’s just say that’s not the best food to eat on a long-term basis.

But I know all-too well about that because I was one of them. I’d cram foie gras, duck cracklings, and butter-roasted anything in my gullet whenever I wanted. And byy the time my shift was done, I’d head home, twist open a jar or salsa, rip open a bag of tortilla chips, and watch a few re-runs of unchallenging fare, like three episodes of Fantasy Island back-to-back, at 2am on the sofa, glued to the television, wondering at how many times they could work Barbie Benton into an episode while your brain turned to mush.

For a while, I worked in an Asian restaurant. People have this image of Asian cuisine as “healthy”, which some of it is. But without pointing fingers, a lot of it is deep-fried or cooked in gobs of chicken or pork fat. And peanut sauce? Don’t even get me started on what’s in that evil destroyer of waistlines. But when a cook hands you a platter of deep-fried shrimp toasts, who am I to refuse?

So when I left the restaurant business, I had a petit paunch. It wasn’t terrible, but was enough so that when I was heading to Mexico on vacation, I had to get rid of it tout de suite.

So I began exercising rather vigorously and lost around twenty pounds through hard work, lots of sweat, and most importantly, modifying the way I ate. Banished were the big glugs of olive oil in my soup. Instead, there was a gentle, golden swirl floating on top. Salads weren’t drowned in dressing, and I gave up my one-lobe-per-day foie gras habit. (I’ve also recently given up les chips since I moved from San Francisco, and for the most part, les frites, because it’s hard to find fries in Paris that you can’t tie in a smooth, unbroken knot and I’d rather bank those calories for salted butter caramels instead of limp French fries.)

Recently, I was stunned when two French people told me I was fat. One (Romain) told me I had a ‘petit boudin’ (little sausage) and another (Romain’s brother) said, staring at my stomach; “Tu as grossi, Daveed!”

Granted comment #2 caught me in mid-yawn, when my stomach was, arguably, distended. But still, I’ve learned that the French aren’t so…uh, discreet when making personal observations. Sure, there’s a culture of not acknowledging things, like the icky doggy doo or whatever pas hygienic hijinks happen (I think that’s attributed to le privacy, or libérte, a concept that usually gets evoked when it’s your personal liberty, rather than the liberty of others), but still, as an American, where we’re used to “You look great!” and “Have a nice day! no matter how much you want to punch somebody out”—it’s an adjustment. 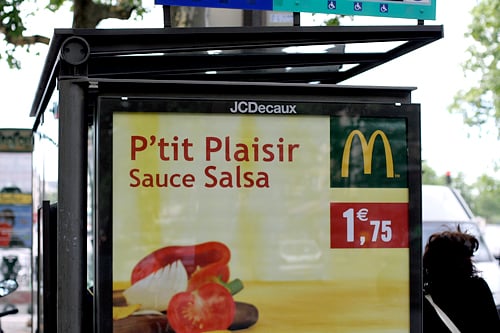 Yet in the interest of keeping Paris nice-looking for everybody else, and coupled with my shame trying squeeze into euro-jeans about a month ago surrounded by insanely-skinny men with 28-inch waistlines at the Printemps department store—who rub my nose in it by wearing their jeans barely clinging on, half-way down their torsos—I’m on a p’tit régime, a little diet.

(Everything in France gets diminuated: “…my petit accent américain, meeting a friend for a petit café, dealing with the petit problème at the bank, having un petit dessert…which doesn’t really exist, which is likely why I’m in this mess..taking a p’tit weekend. And see? Even the word ‘petit’ gets p’tit-d.)

So I’m watching what I eat for a while. Which is hard. Even though six-pack abs are called ‘tablets of chocolate‘ in France, I’ve got a bunch of chocolate bars stacked up and tempting me which will not likely give me les tablettes de chocolat if I work my way through them all. I’m baking and testing recipes day & night. And there’s all the wine being poured around here, which has pretty much replaced water in my life, except that which I use for making coffee. (If I could figure out how to get away with that, I probably would, though.)

And by the end of summer, I plan to be back in fighting weight. I’m going to do that by being a bit more restrained with the olive oil, the smears of salted butter on my morning toast, the cheeses (*sob*), and I’ll be adding an extra cube or two of ice to my glass of rosé from here on out.

You won’t have to suffer with me, though, as I’ve got plenty to write about in the pipeline already, plus a freezer-load of ice cream begging to be discussed.

I suppose I should feel fortunate to live around people that are so open about expressing how they feel—at least when it comes to pointing out my shortcomings.

And if I have an issue with that, as they’d say, well, that’s my own p’tit problème.