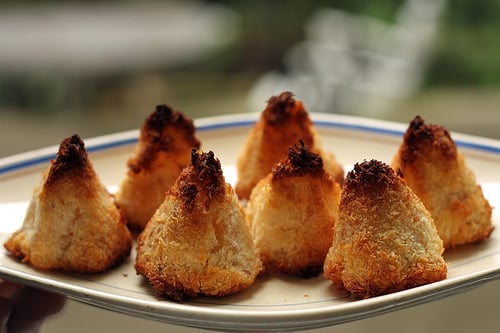 By now, just about everyone is familiar with Parisian macarons, those little almond meringue sandwiches pressed together with a creamy filling, which are now available far and wide. But if you go to neighborhood bakeries in Paris, you’ll find another kind of “macaroon” – Rochers à la noix de coco, which, because the French are fond of abbreviations, is often shortened to rochers coco.

They’re a similar take on American-style coconut macaroons, which are said to have gotten their moniker when almonds (which are the base for traditional Italian and French macarons) were hard to find at one time, so coconut was substituted in their place. 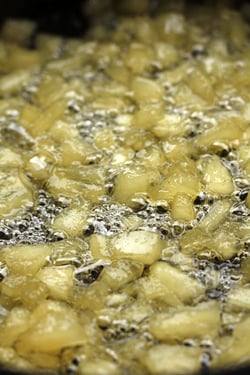 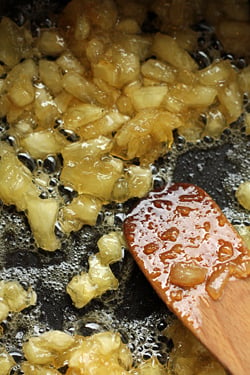 “Coconut Rocks” can take any number of forms and sizes, and I don’t usually order them because I like to make my own. That urge also prompts me to make a trip to a Sri Lankan or Indian market up by La Chapelle, which are always a treat to visit since I stroll the aisles for what seems like hours and hours, picking up all the colorful bags of baking ingredients, sniffing the unusual spices, and wondering what the heck one does with all those strange-looking, marvelous roots, leaves, and vegetables. I always leave with a few kinds of jaggery (sticky brown sugar), a bag of vegetables that I have no idea what the heck I’m going to do with (because I can’t help buying something because it looks really cool), and a big sack of snowy white unsweetened dried coconut. 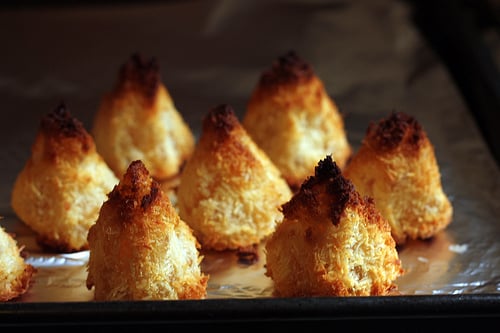 While I was at one of my favorite stores (VT, 11-15 rue de Cail, 10th) doing some shopping, I also picked up a can of pineapple. I don’t regularly buy canned fruit, but it works very well for these cookies and is a lot easier than peeling and trimming a fresh pineapple. Don’t get me wrong – I’m a big fan of fresh produce. But since we’re cooking it down to a paste, I’m okay with using the tinned stuff. If you can only find pineapple in rings or chunks, pulse it a few times in the food processor, or hand chop it, until it’s in smallish chunks.

Once baked, the nicely browned cookies will have a delightfully crackly crust. But the inside remains soft and slightly sweet, thanks to the bits of caramelized pineapple tucked inside. So be sure to cook them so they are entirely browned all the way up the sides. 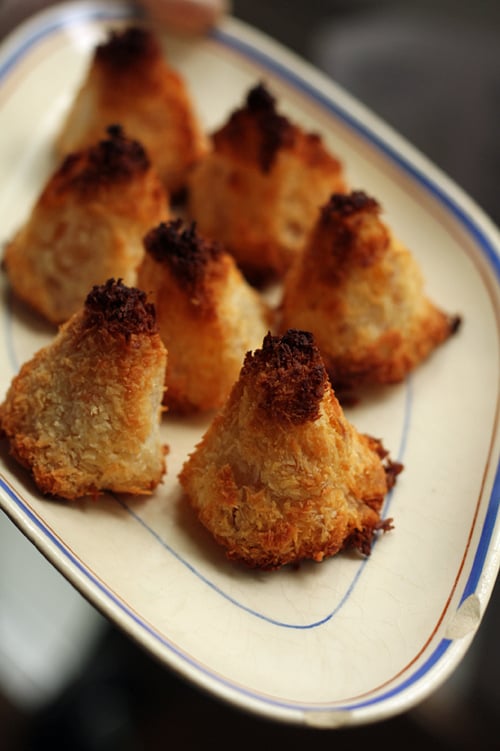 I prefer to use unsweetened pineapple packed in its own juice, but if you can only find pineapple packed in light syrup, reduce the amount of sugar to 3/4 cup (150 g) for caramelizing the pineapple. If you want to use fresh pineapple, you’ll need 1 1/4 cups of caramelized crushed pineapple paste.
One 20 ounce can (about 600g) crushed unsweetened pineapple
1 cup (200g) sugar
pinch of salt
3 1/2 cups (245g) dried unsweetened shredded coconut
3 large egg whites
1/2 teaspoon vanilla extract
1. Put the pineapple in a wide skillet (preferable nonstick) with the sugar and a pinch of salt.
2. Cook the pineapple until the liquid is evaporated, then continue to cook, stirring constantly, until the pineapple gets thick and sticky, and just begins to brown. Remove from heat and scrape the caramelized pineapple into a large bowl. Then mix in the coconut into the pineapple, then the egg whites and vanilla.
(The mixture may be rather difficult to mix with a spatula. You can mix it with a stand mixer fitted with the paddle attachment or use your clean hands.)
3. Preheat the oven to 350ºF (180ºC). Line a baking sheet with parchment paper.
4. Use your hands to gather a bit of the batter, about the size of an unshelled walnut, and form it into a round or a pyramid-like shape, onto the prepared baking sheet. Continue forming all the cookies then bake them for about 30 minutes, rotating the baking sheet midway during baking. The cookies are done when they are nicely browned up the sides.

Storage: These cookies are best served the day they’re made, since over time, they’ll lose their slightly crunchy crusts. You can store the batter up to five days in the refrigerator and bake them off as desired.

Notes: Unsweetened coconut is available in shops that specialize in ethnic ingredients and in natural food stores. It’s also available online on Amazon.

I’ve not tried this recipe using sweetened coconut flakes since it often contains additives and preservatives. So do try to seek out unsweetened shredded coconut, which is sometimes called dessicated coconut.

Eagle-eyed readers will note that I baked these on foil, since I was using a kitchen that wasn’t mine. You can use it as well, although I prefer parchment paper.