Menu
« At the Market: Bitter Turnips and Smoked Garlic
Mexican Dinner with Susana Trilling, in Paris » 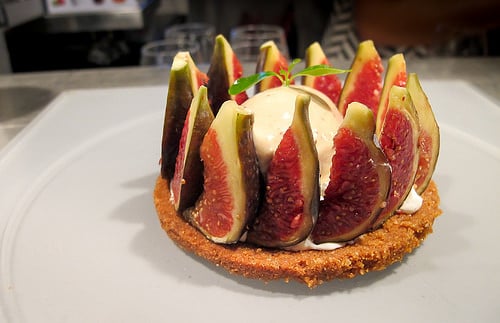 Sometimes I feel like a nitwit, especially when people start talking about all the new restaurants in Paris. I am a creature of habit (and I don’t like disappointment), so I generally go to the same places. I also tend to stay on the Right Bank, where I live, as the restaurants tend to be more exciting and less-fussy, with a more casual ambiance.

But I’d heard good things about Pottoka, over in the 7th arrondissement, helmed by chef Sébastien Gravé, who likes to improvise on his native Basque cuisine, known for lots of colors and contrasts, as well as a hint of spice. The restaurant is named for a breed of smallish horses from that region, which is located in the southwest part of France, and spans into Spain as well. So the foods often feature red peppers, lively seasonings, and seafood. It’s also famous for the Ibaïonan (Basque) charcuterie, which is some of the best in the world. 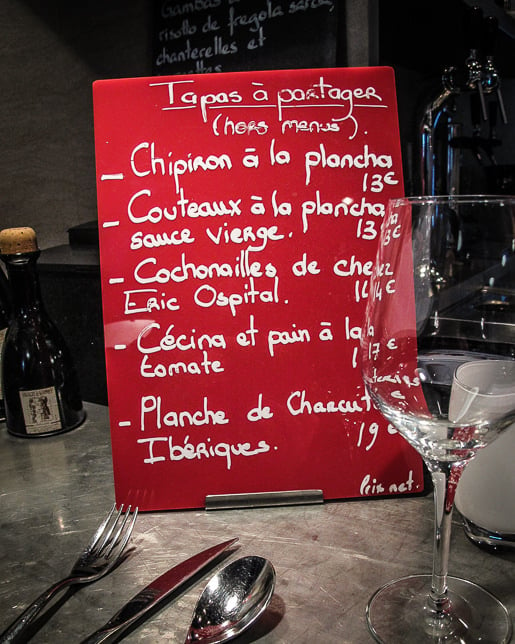 Since I was on my own, I didn’t start with any of the nice charcuterie on offer. But the list had some notable things on there, including cécina (dried beef, which if you haven’t tried, is great stuff) and cochonailles (cured hams and sausages) from the notable Eric Ospital. Scanning the dining room at midday, from the looks of things, this was a working lunch crowd that probably had to go back to their desks afterward, so not many people were drinking wine. I had a ton of work piled up back at home, too, but couldn’t resist a glass of cool Jurançon from Domaine Cauhapé that was pleasantly dry (some are sweet). It was a very generous pour and I cursed the unpleasantness that was waiting for me at my own desk. 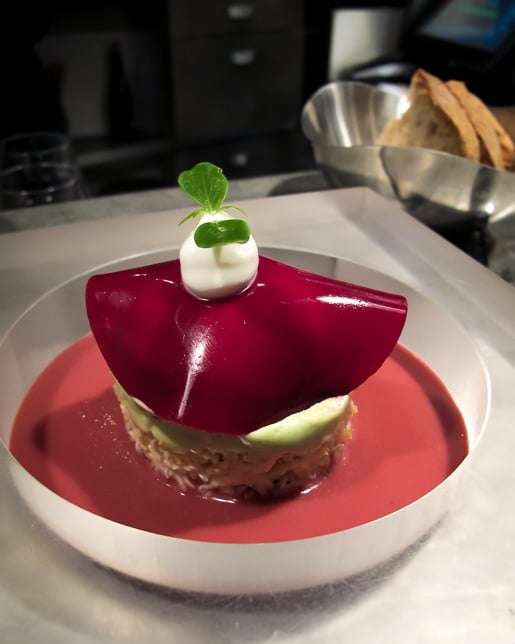 I started with a precise circle of crabmeat covered with lemon mousse and avocado, centered in a pool of rosy beet “gazpacho.” Draped over the top was a jellied round of beet juice. It was a lovely entrée and I scraped the bowl clean; my only comment was that the citrus mousse was a bit assertive for the delicate crabmeat. But beaucoup de points to the kitchen for not finding one speck of crab shell in the dish, which is the surest way to ruin anything with crabmeat in it.

The Lucite bowl, cut out from a larger square, was a little curious, and I couldn’t help wondering how the servers would remove the “bowl” from the table. Fearing the sound of broken fingernails, I kindly lifted it up for them when it came time to clear my place for the next course, which was gambas à la plancha with a fregola sarda “risotto,” which was more like a rich sauce with little balls of toasted pasta in it, along with bits of zucchini and wild chanterelle mushrooms, adding an earthy note to the perfectly cooked prawns. A Basque touch was added by dusting the foam surrounding the dish with spicy piment d’Espelette. The dramatic, high-sided bowl made me unsure of where to pile up the prawn shells once I was finished emptying them, so I made a little makeshift “raft” with one of the tiny beet greens to hold them, then I pushed them aside to eat the leaf. Next time, I’ll ask for a side dish. 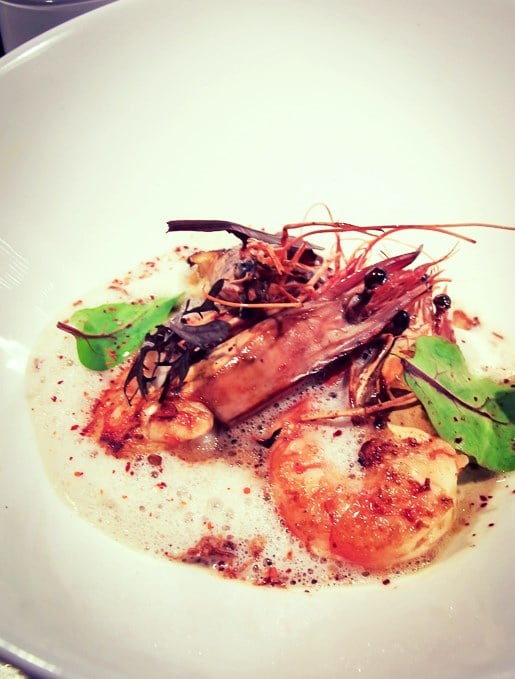 I really wanted to try the gâteau basque for dessert, a traditional dessert that’s a buttery cake that sandwiches a dense, cream filling inside. It’s one of my favorite desserts – but I was stuffed. (The four women behind me were splitting one slice. And if there had only been two of them, I might have asked for a taste of theirs. But I didn’t think it fair when there were four of them battling it out over one order.) So went for the fig tart with mascarpone and prune-Armagnac ice cream, layered over a speculos spice cookie. Every dessert that was coming out of the kitchen looked spectacular, and mine was no exception. They were obviously all made in-house, so kudos to Chef Gravé for pulling them off so nicely. I loved the speculos cookie, similar to a gingersnap, although I could only make it through three-quarters of my enormous dessert before calling it quits. 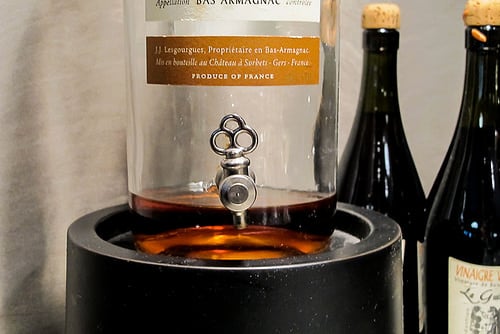 The three-course lunch is €27 if you order the plat du jour (the daily special), with your choice of appetizers and desserts from the regular menu. (There’s a €35 menu which allows you to choose from other main courses from the printed menu. And a few specials are on the chalkboard.) The restaurant is tiny, so if you go, expect to be close to your neighbors. I wasn’t sure if I needed to call for a lunch reservation, but when I walked in and saw everyone in there, I was glad I did. Although I decided since I was by myself, I’d take a seat at the bar and let them seat a walk-in two-top at the table that I’d reserved. (Once a restaurant employee, always a restaurant employee) But I didn’t feel alone there, as I had an oversized bottle of Armagnac on tap to keep me company. The staff is very friendly and efficient, and everyone in the kitchen smiled at me on the way out. A happy staff (and chef) makes good food. And that seems to certainly be true at Pottoka.