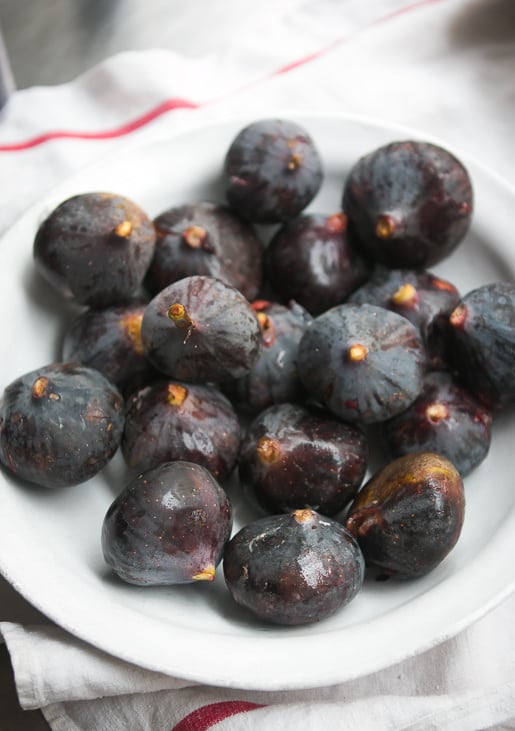 I regularly visit the outdoors markets in Paris to do my shopping. It’s a lot nicer than the supermarket and I’ve gotten to know many of the vendors personally. Last Friday I took a lovely journalist from Poland through the market, who was writing a story about me and my new book. And I thought I’d be fun to take her shopping with me. 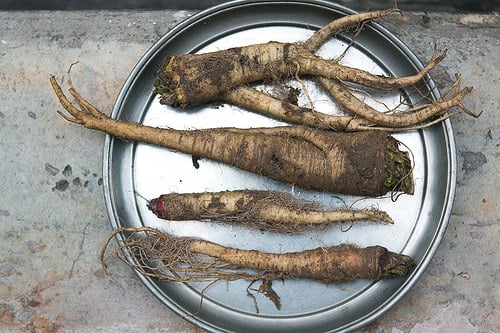 She asked me a lot of questions as I blazed through the market, where I dialed in on the fresh figs immediately. Worried that the fragile beauties would get smushed in my bag, I made a mental note to go back and get some. The best market tip I can give is to see what everyone has, then go back, and get what you want. But another is not to go with any expectations, because what might be available in abundance one day, will (invariably) be gone a few days later when you go back to get it. So I stock up when I see things things, like the ripe ‘n ready black figs, shown up above. 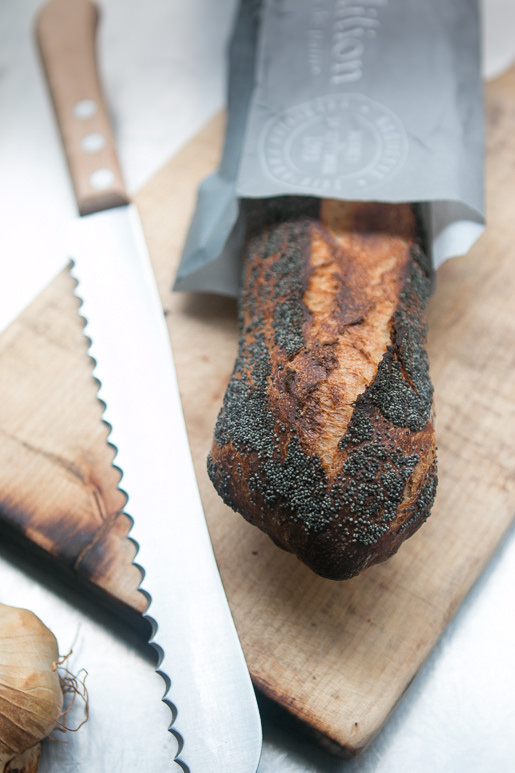 The ones that were syrupy and sticky-soft got eaten fresh, right away. A few others were roasted in the oven with some white wine, honey, and a few branches of fresh thyme.

I also bought a magnificent head of lettuce, since I eat a lot of salads. And even though I had plenty of cheese at home – as usual – while introducing her the women who sell the stellar cheeses that I’m fortunate to have so close by, I was powerless to resist the artisanal goat cheeses, each wrapped in a chestnut leaf. And into my basket one of those went. 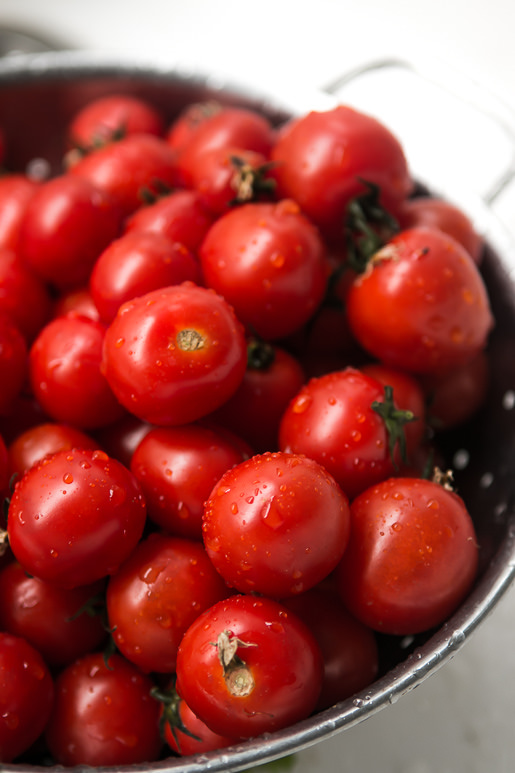 She asked me about root vegetables, which are having a renaissance in France, so I took her to the stand that specializes in les légumes racines. I’d gotten bear’s garlic from that vendor last year (and, of course, when I went to get more a few days later, it was nowhere to be seen), and while perusing her colorful radishes and beets, I noticed a basket holding tresses of ail fumé, or smoked garlic. 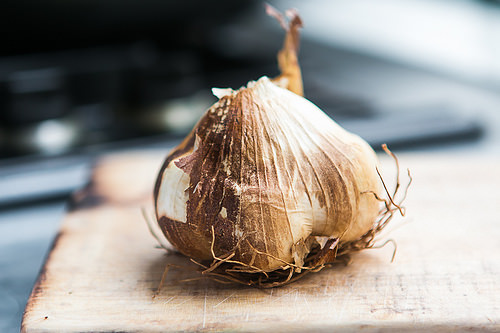 Parisians aren’t know for the abundant use of smoky flavors. So it’s a little surprising to see smoked garlic at the markets. This specimen that came home with me hailed from the north of France and a little research led to me learn that they’re Ail fumé d’Arleux, which have been in production for over four hundred years. Smoking was originally a way to preserve the garlic. Before refrigeration, people would store foods in their chimneys (including cheese), which would help preserve it, as well as lend a smoky taste. So why not garlic? 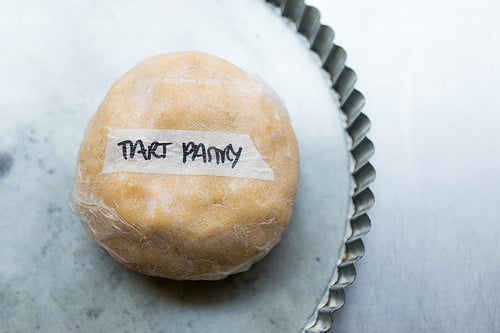 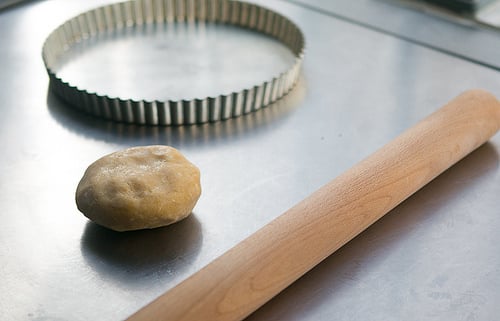 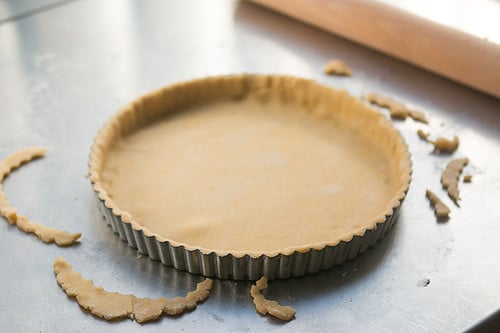 The most notable dish using smoked garlic is soupe à l’ail d’Arleux; a simple soup of smoked garlic, potatoes, carrots, and thyme, sometimes topped with grated cheese or crème fraîche – you can find some recipes here and here, in English. 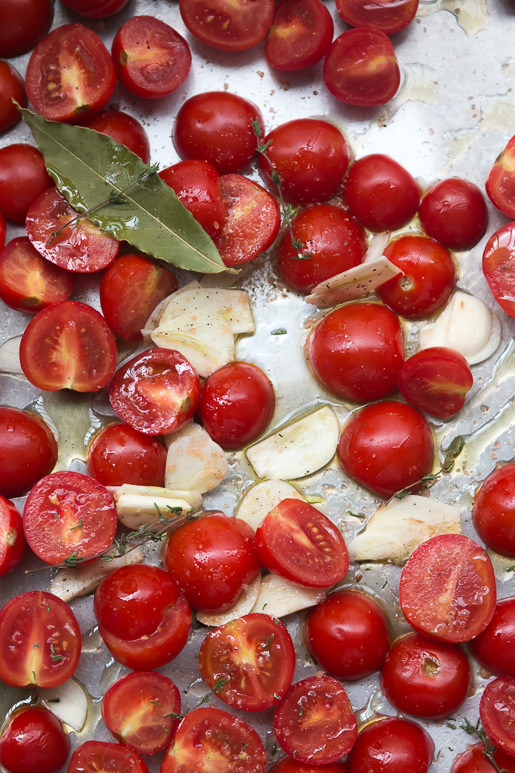 I didn’t make soup, although it’s on the roster for this winter. Instead, being très Parisien, I had picked up some cherry tomatoes and decided to give them a good oven-roasting (using the recipe in My Paris Kitchen), along with a generous amount of smoked garlic. I piled them on a baked tart shell (from dough that I found that had been languishing in the freezer, which got a bit dinged up on the walk to their place), that I topped with a slather of fresh goat cheese (recipe also in the book). Since I was going to a lunch where one guest was a vegetarian, it made a fine main course, finished off with a scattering of flat-leaf parsley and rosemary oil. 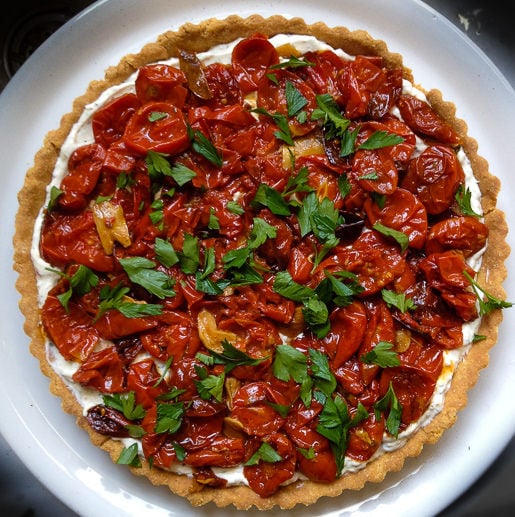 A few others cloves got scraped over some leftover baguette slices, that I’d brushed with olive oil and toasted in the oven. 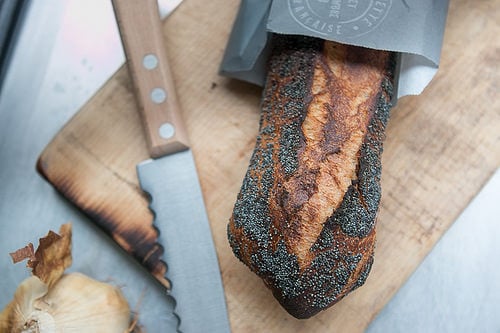 As soon as they came out and were cool enough to handle, I scratched the garlic over the oily surface of the bread, that released that heady garlic fragrance, and we ate them with wild mushroom omelets the next day for supper. And people ask me why I live in France? 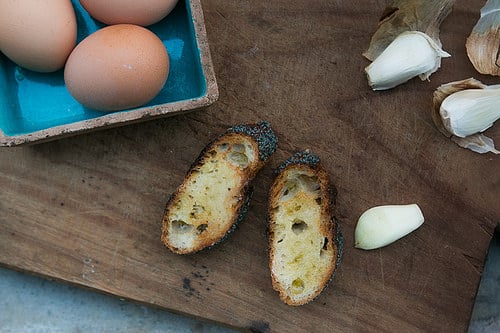 Another curiosity from the market that I picked up last week were navets amèrs, sold the friendly guys from North Africa, who have taken to me, l’américain, who always asks them about whatever curiosities and oddities they have on display. (That, usually, everyone else is ignoring.) But another tip if you go to markets in Paris is to take the time to talk to the vendors. (And being Paris, you can ignore those people lined up behind you.) Most are happy to tell you about their fruits and vegetables, and how to use them. And even madame, pushing her shopping cart into you from behind, nudging you forward, might also chime in with some pearls of wisdom as well.

The name means “bitter turnip,” but as they sat on my counter at home, I started thinking that they might actually be ginseng — and since I paid about 75 centimes for them, that would have been the deal of the century. When I’d asked the fellows what to do with them, the guys were rapturous, explaining how you just trim them, slice ’em up, and eat them raw. Um, okay. 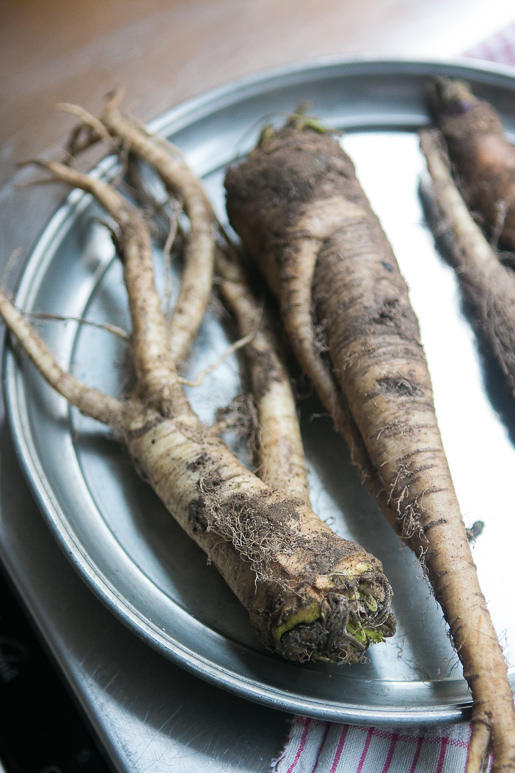 The idea of bitter is scary to most of us. And with good reason; many things that are bitter are either bad for you, or poisonous. That’s nature’s way of telling us not to eat them. (My friend Jennifer McLagan recently released Bitter: A Taste of the World’s Most Dangerous Flavor, with Recipes, a pretty incredible look at all the bitter foods that we eat and enjoy. She even included a turnip ice cream recipe, but not sure I’m that adventurous – yet.) 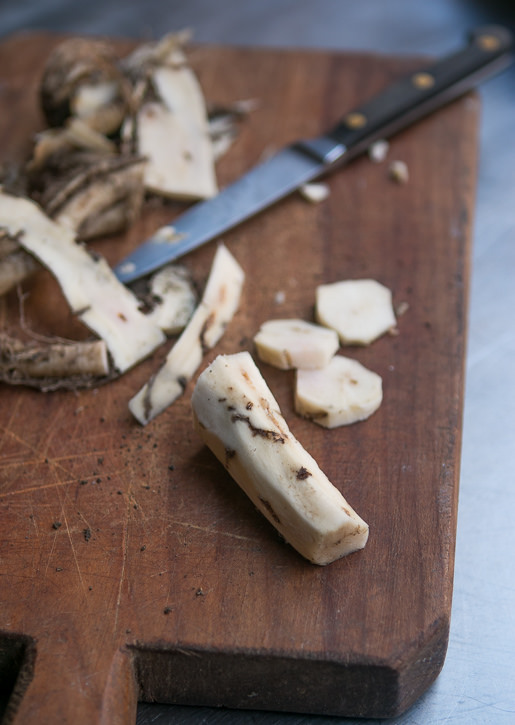 Unfazed by the hairy roots, I took the advice of the guys are the market and carefully peeled one, digging deeply with my paring knife, since the skin was thick and there was some deep veining in there. I sliced a few rounds and took a taste – and found them absolutely delicious. They had a slight horseradish flavor, and I could absolutely see using them in my next tagine, or even roasted up with a mound of other winter vegetables when the weather gets cooler. Although I think I’ll leave the tripe at the market. 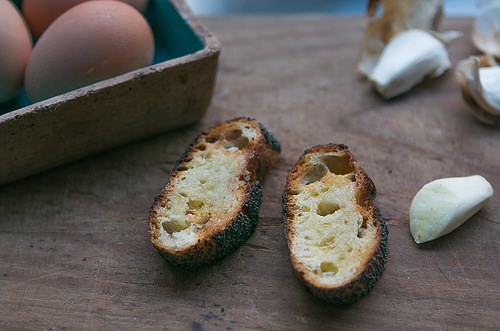