Uncharacteristically, I’ll spare you the specifics, but I need to catch up on about 147 hours of sleep. And while we’re at it, I could use a hug. And since the former isn’t necessarily easy to come by here, as is the latter, I was embrassé by dinner at Alain Ducasse restaurant. While it’s been tempting to remove the “sweet life” byline from my header until things return to normal, since one of the sweeter sides of Paris is an occasional foray into fine dining, I dusted off my lone, non-dusty outfit, and rode the métro to a swankier part of town.

When I was in Monaco and I went to visit the chefs and the kitchen at Alain Ducasse’s restaurant, Louis XV, the pastry chef asked if I could possibly stay and taste their lovely desserts. Unfortunately I had to catch a ride back to Paris because I didn’t want to miss, well..nothing – I couldn’t stay. Then a few weeks later, a lovely invitation to his Paris restaurant arrived in my mailbox and I cleaned myself up, then headed into the aquarium. 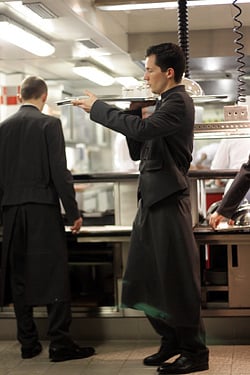 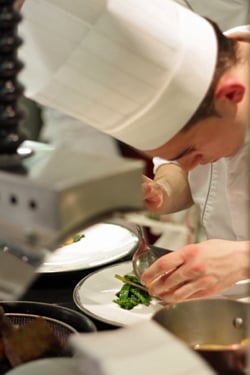 The aquarium, or “the fishbowl” is a room off the side of the kitchen where guests are invited to dine. It’s rather sparse – just four chairs around a table with marble walls and a big glass door, and miraculously, the temperature could be controlled in seconds. I’m not normally a fan of in-kitchen dining, since I spent three-quarters of my life eating in kitchens – and watching people work when I’m not isn’t necessarily how I relax – but when I saw the set-up, I was excited to be able to be so well-situated. 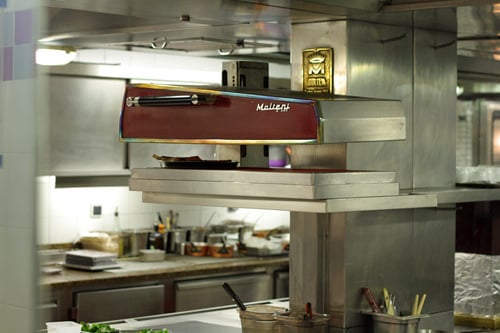 I don’t often go to three-star restaurants, which are an interesting aspect of French culture. A few weeks ago a Frenchman asked me, “How come in France we can have such high levels of service, but in general, service is not good?” (He used stronger wording than that.) I wasn’t quite sure how to respond – nor was I sure why he was asking me. Although places like this restaurant are expensive and can afford to hire qualified staff, they also attract people – men and women – who are making a career out of working in this restaurant business; they’re not just passing time until they can pick up their retirement checks. They’ve chosen to go into a very rigorous profession and if they aren’t competent, they won’t last more than a few days, and their career would be over before it even started. 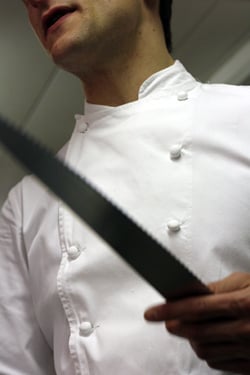 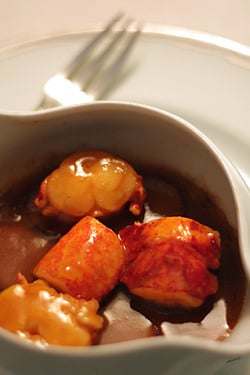 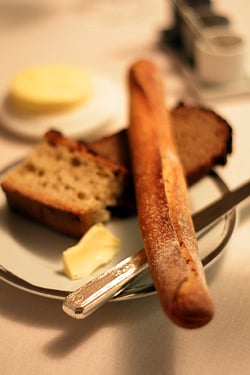 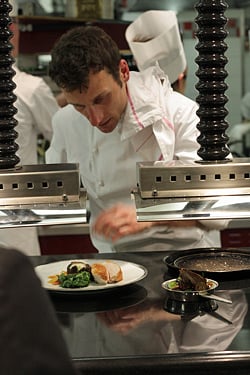 Same with the cooks at restaurants such as this, who start work just about the time most of us are sliding out of bed, ready to have our morning coffee. And they don’t get stop working at full-tilt until well after midnight. I used to work like that and I know how hard it is. And while it’s easy to write off high-end restaurants because of the lofty prices, when you see how everyone is cooking and serving at the very top of their form, from the host or hostess who greets you and takes your coat, to the waiter who brings you a slim tray of just-dipped chocolate Florentines to snack on with your café express, there’s no room for slackers and it shows how polished and dedicated the French can truly be. 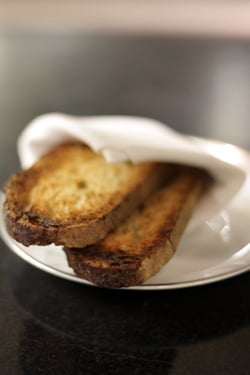 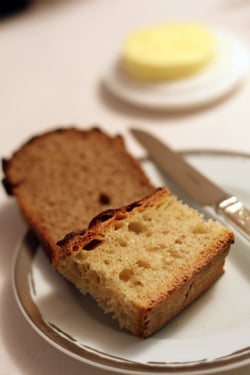 Even better than the service, the best part of dining in a 3-star restaurant is the bread, and the butter. Normally several kinds of butter are brought to the table, salted and unsalted, and from the first swipe, you can tell that the butter is from a carefully selected producer. I don’t know how they do it, but three-star places seem to get butter far better than you can get anywhere else in France. And to go with it, there was house made rye bread, which was so good, I’d wish they made suit jackets with larger pockets. 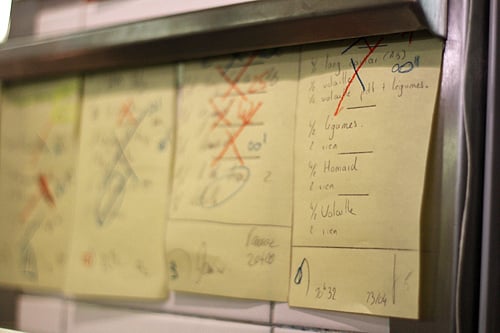 And Romain was surprised there was one person on the line, who sole job seemed to be to make the toast. Lest you think making toast is easy, you haven’t made breakfast for me. (You didn’t hear this from me, but I’m thinking of letting my toast-maker go, and replacing him with the one at Ducasse.) Each slice, wrapped in a starched white towel, was crusty, uniformly browned, and perfect.

Just after the bread came little toasts topped with lardo and smoked fish, humorously wrapped in butcher paper, perhaps a nod to the recent “food truck” trend, that’s getting a little bit of press in Paris (in an interview, Alain Ducasse expressed an interest in food trucks, which had a lot of people speculating), then out came a smartly folded napkin, containing a pile of deep-fried frogs legs, Cuisses de grenouille, with a little well of sorrel dipping sauce. 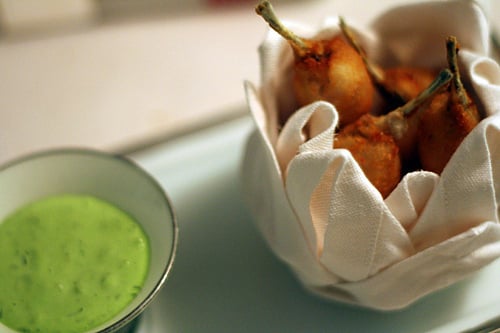 Each time I eat something with sorrel in it, I wonder, “Why don’t I buy sorrel more often?” Because there is something about those puckery deep-green leaves which, when wilted, give off a grassy lemon taste, which can stand up to just about any other flavor that it’s paired with. I’m thinking there might be a batch of sorrel mayonnaise in my future, although I’ll leave rounding up the frogs legs to the professionals. 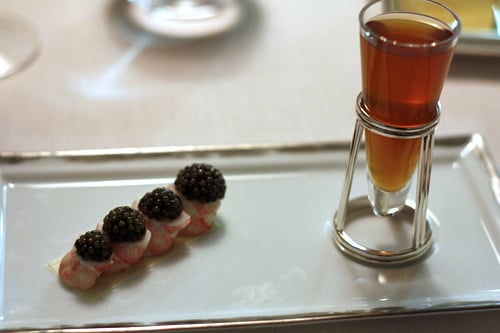 Langoustine rafraîche, caviar, was centime-size medallions of langoustines topped with a perfect curvature of fish eggs; alongside was a tapered vial of rich shellfish bouillon.

I grew up in lobster territory, but never got a taste for them until later in life, which is unfortunate because they went from being two-for-$10, to a luxury item. And in France, I often wonder who buys those Breton blue lobsters from the fish guys at the markets for €75/kg? That’s about €35/lb, give or take, so a whole lobster from the fishmonger might cost you €50.

So I try to get a taste whenever I can manage one, and out came a warm dish of Homard, pommes de mer, which is a play on words of pomme de terre (potatoes) except these are special potatoes, grown near the mer (sea), and take on the salty flavor of the soil. Being a New Englander, I was hoping for a buttery sauce, perhaps flavored with bits of seaweed for the lobster. But even though I was eyeing the butter dish that was still on the table, I thought better than to make a request for “sauce on the side”, and remained a polite guest. 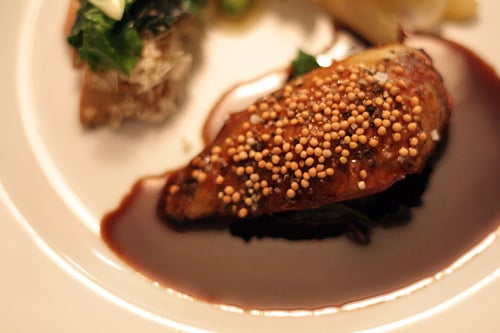 After a generous plate of Pigeonneau topped with mustard seeds and a strip of foie gras and tiny turnips, along with their green tops plucked off and cooked separately, we were barely able to think about contemplating the cheese cart, which is always a marvel in restaurants like this. Because servers at places like this are trained to be intuitive, and miraculously sometimes know what you want even before you do, the waiter sensed our resistance and offered to bring us a little sample of a few that he thought we would like rather than overwhelm us. 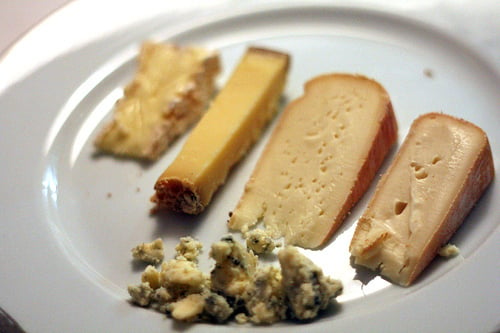 I’m not especially good at taking notes during dinner, but I jotted down les fromages: Camembert du Normandie, Comté (aged 43 months), Abbaye de Citeaux, Reblochon, and Stilton, served with a little salad of very fresh greens. And I must say, that leafy salad was very welcome before the cavalcade of desserts. 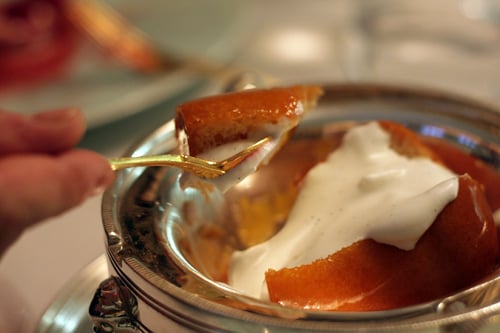 Looking at the dessert menu lingering in front of us, we weren’t sure where to even begin, so we decided to go with something rich, which was the specialty of the house, the Baba au Rhum comme à Monte-Carlo, and Agrumes (Citrus), which after dipping our spoon into, we agreed was one of the best desserts one could possibly imagine. The Baba was split, tableside, and a bottle of twelve-year old Jamaican rum was left for us to douse as we pleased. But it was the refreshing, lively citrus flavors – a wrap-up of the best of the dwindling season of winter fruits – that had us digging our spoons in over and over again. 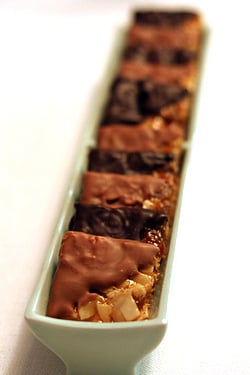 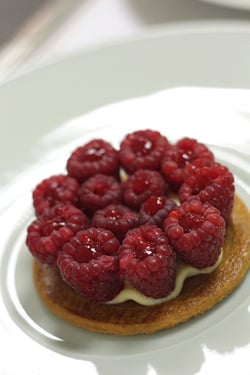 There was also a beautiful raspberry tart, made to order, and pomegranate granita layered over a custardy bed of olive oil cream, which was the perfect pairing with a glass of chilled Muscat wine from Corsica (Domaine Pieretti), which had me making a mental note – something that I seem to do each year, but never get around to – that it’s finally time I visit Corsica. 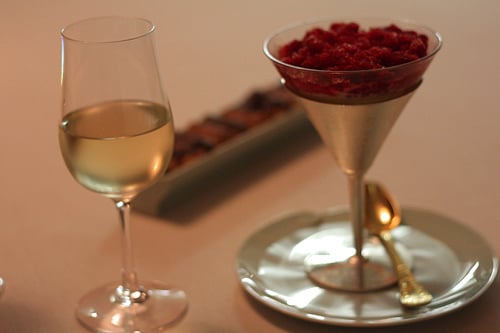 But okay, let’s get back to Paris, and that citrus dessert, a goblet with a riot of winter colors and flavors – candied orange peel and kumquats, and a few other kinds of hybrids tucked in there. On the bottom of the glass was a shimmering layer of Champagne jelly, which is one of my favorite desserts (there’s a recipe for it in Ready for Dessert), and on top was a generous spoonful of icy crystals of Campari (you could use my Grapefruit-Campari Sorbet recipe, and scrape it into crystals) – and voilà! – with a little pluck you can recreate it at home. The whole concept was brilliant, and simple. 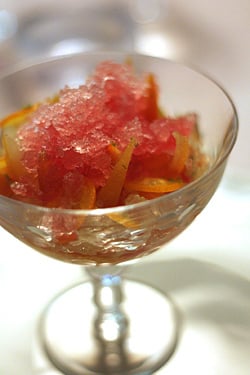 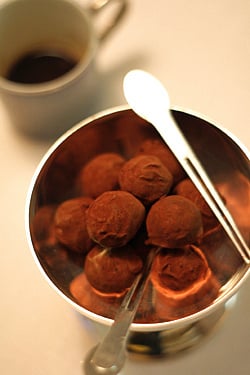 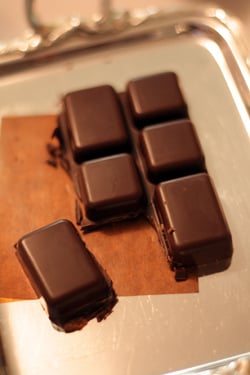 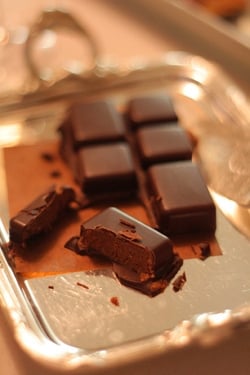 With tin cups of coffee, just enough to ensure we’d make it home, out came a reasonable cavalcade of mignardises including marshmallows, a treat I can never resist, even though I was full, bittersweet chocolate truffles, Florentines dipped in dark and milk chocolate, and chewy pâte de fruits, one flavored with pineapple and the other with a liquid center of crème de cassis, which I was careful not to dribble on my almost-new sport coat.

When we left, the staff had kindly wrapped up the unfinished caramels and the chocolate bars filled with crunchy praline, which got finished off before noon the next day.

Note: Dinner was courtesy of Chef Alain Ducasse and his team. Thanks to his staff, especially talented Chef Christophe Saintagne, for a wonderful evening and experience.

Alain Ducasse (A Life Worth Eating)