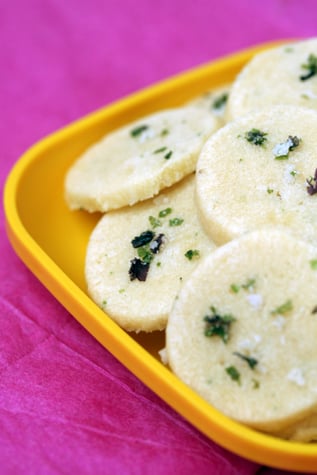 Last week, I was making my weekly ice cream deliveries to the vendors at my local market, which was especially necessary since my freezer was super jam-packed and begging for relief. (Which you may have seen when I inadvertently bared-all in my kitchen slide show.) When I stopped by to drop off a pint to my pal Régis, who sells salt at the market, I immediately honed in on a big basket he had heaped full of tiny sacks of bright green seaweed-flecked salt. He opened one, waved it under my nose, then handed it to me to play around with at home.

The first thing I did was add it to some eggs I was scrambling in the center of some fried rice, and it was excellent. Then I thought it would be delicious sprinkled over cold soba, thin Japanese buckwheat noodles. And it was. So I kept going and made a jeon, a big Korean pancake, which was another hit, too.

Then pulled out a batch of cole slaw I’d made the day before, added a few bits of it, and it completely came alive with flavor. The crisp Savoy cabbage, along with the crunch of roasted peanuts, black sesame seeds, and a few slippery bits of avocado played off nicely against the salted seaweed.

I’m planning to smuggle some Chex back from Texas next month as I think this salt would make an excellent base for some homemade Chex party mix, whose appeal may take some explaining for my Parisian friends. But I’ve been serving these little cookies along with aperitifs before dinner to much acclaim. Although I used seaweed salt, you could use flaky sea salt and add a handful of finely-chopped olives or nuts to the dough, which I imagine would be pretty terrific as a pre-dinner bite as well.

If you don’t use seaweed salt, use 1 teaspoon flaky sea salt, adding it at the end with the flour. If you want to make your own seaweed salt, chop a mix of dried kelp, dulce, and toasted nori until relatively fine. (You can find them at natural foods stores and Asian markets.) Afterwards, mix or grind it with flaky sea salt in equal proportions. But if seaweed’s not your thing, feel free to play around with other naturally-flavored salts. Cinnamon and spicy red pepper both sound good to me.
6 tablespoons (90g) unsalted butter, at room temperature
2 teaspoons fleur de sel aux algues, plus additional for sprinkling the cookies
9 tablespoons (110g) powdered sugar
1 large egg yolk
1 1/2 tablespoons olive oil
1 cup plus 2 tablespoons (155g) flour
1. Mix the butter and fleur de sel aux algues together until smooth. Beat in the powdered sugar, then the egg yolk.
2. If using an electric mixer, scrape down the sides, then add the olive oil and flour until smooth.
3. On the counter top, roll the dough into two logs, each about 8-inch (20 cm) long. Wrap each in plastic and chill until firm enough to slice, about 1 hour.
4. To bake the cookies, preheat the oven to 300F (150C). Line a baking sheet with a silicone mat or parchment paper then slice the cookies on the scant side of ¼-inch (½cm) thick. Place them evenly-spaced on the prepared baking sheet.
5. Sprinkle a couple of grains of seaweed salt over the top of each cookie (mine was pretty coarse so I crushed it a bit first), then bake for 12-14 minutes, or until slightly-firm. Cool before serving.

Storage: The cookies are best the day they’re made, but can be stored overnight in an airtight container. The dough can be chilled for up to 5 days, or frozen for 2 months.

Which Salt is Best? (Slate)