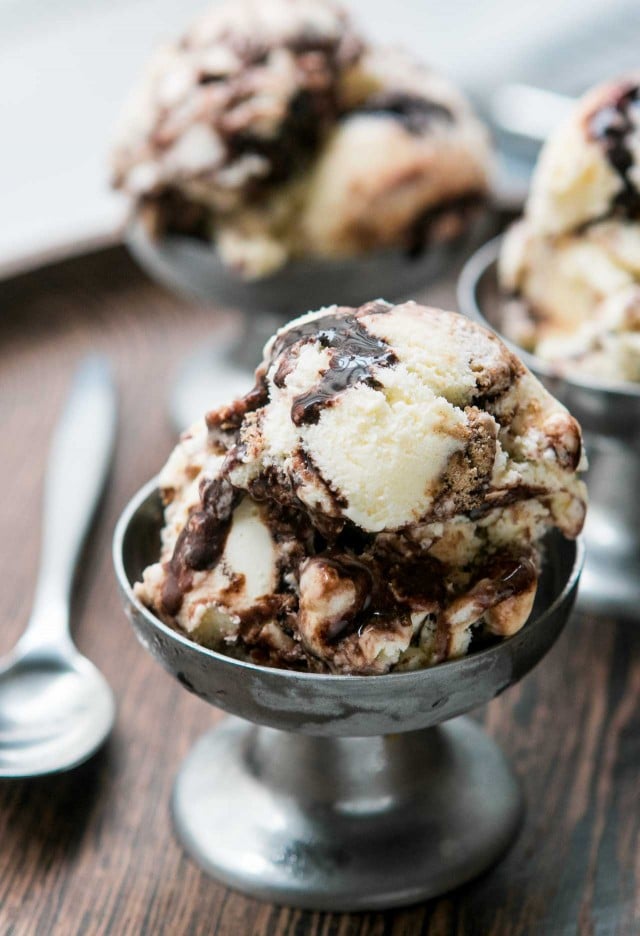 Marshmallows + chocolate + Graham crackers x ice cream = Bliss. A few people, including Deb, intimated that my beloved combination of marshmallows, chocolate and spiced crackers might be in danger of becoming passé, which was the first I’d heard of that. I don’t want to quibble with her, because she knows her cocktails, and dumplings. But on the other hand, I guess in the U.S., things get done so often that people tend to overlook how good they are, no matter how many times the combination is repeated. After macarons crested, they settled back down to being normal again. And who doesn’t want to be normal? Come to think of it, I often wonder what they would be like…

While I’m on the subject of normal, or not, I was the kid who liked to torch his marshmallow over the campfire. While the others were pulling their sticks away, lest the puffy pellet on the end get any hint of blackness. And yup, I now know that some say you’re not supposed to eat burnt foods. But since I don’t drive a car, I don’t smoke (second-hand smoke in Paris notwithstanding…), I use free-range eggs, and I even wore the same socks two days in a row last week. (Which was an accident.) So I think it’s okay to have a over-toasted marshmallow every so often. In fact, I wish I had them more often than I do. 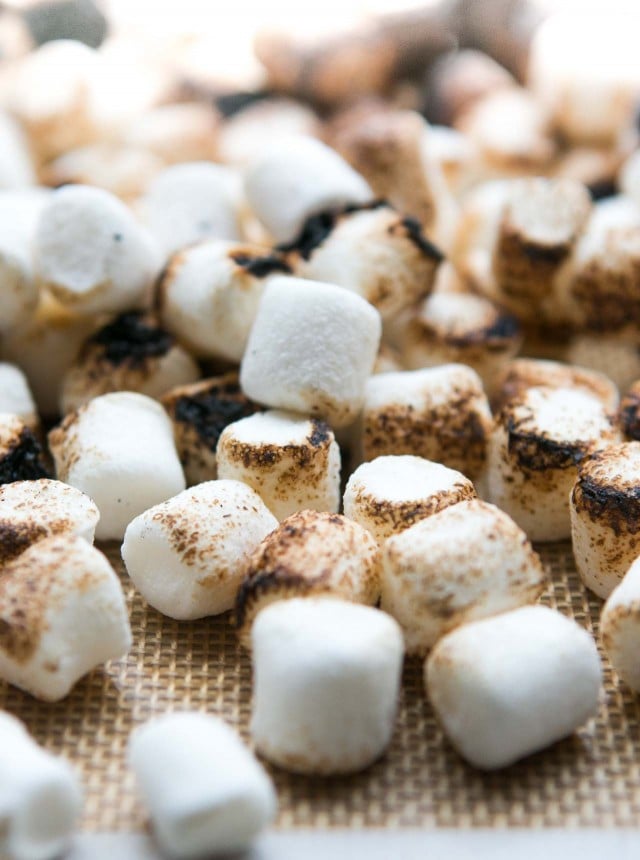 Paris has seen a lot of American food fads cross the Atlantic, which have been embraced…actually, some over-embraced, such as caramel corn, burgers, cupcakes, fish and chips, and anything Brooklyn, but S’mores seem to have gone under the wire. It’s odd because French people love guimauves (marshmallows), chocolate, and spiced cookies – so what’s not to like about combining them?

I decided to create my mash-up of those flavors in one scoop of ice cream, which I served up to some Parisian friends. I’ve been intrigued by toasted marshmallow ice cream recipes that I’ve seen. But tasting them, the flavor of the marshmallows gets muted by blending them with the custard base. So I decided to keep them separate, torch them on their own, and gently mix them into the ice cream so they stay separate along with a ripple of deep-dark chocolate fudge sauce.

I reached into my  “American” stash here in Paris, a magic place/drawer in my kitchen all filled with wonderful surprises, that I often forget about. Stuff like chipotle chiles, dried sour cherries, molasses, aluminum-free baking powder and tomatillo salsa is in there, because you just never know. And I had a bag of mini-marshmallows stuffed in there, for whatever reason, which was begging to be used.

I often make my own marshmallows, but the store-bought ones come in handy for marshmallow-based emergencies. (Yes, those do exist. Which I guess is the reason that I had them.) And not everyone wants to make every ingredient for every recipe. There was a joke going around “Why buy it for $8 when you can make it yourself with $89 worth of ingredients and $350 in kitchen equipment?” And I have a few other kitchen drawers full of things that will confirm that I’ve been guilty of that myself. Anyone want to buy a crème brûlée iron, the kind you heat up over an open fire? 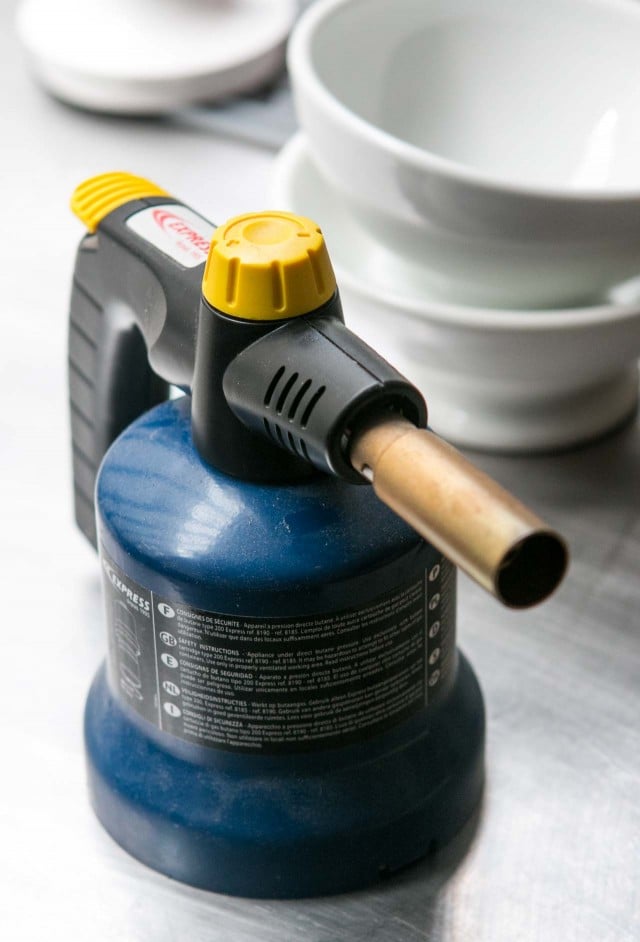 I did think so. A while ago I had bought one of those mini torches that “chefs” are supposed to use, for making crème brûlée at home. But after ten minutes of waving the dinky flame over the sugar, nothing happening, and I invested in a bigger, and better, model. One that doesn’t require a roaring flame to operate. It makes its own. The only caveat is that it’s very powerful and a few of the marshmallows got charred, which I personally like. 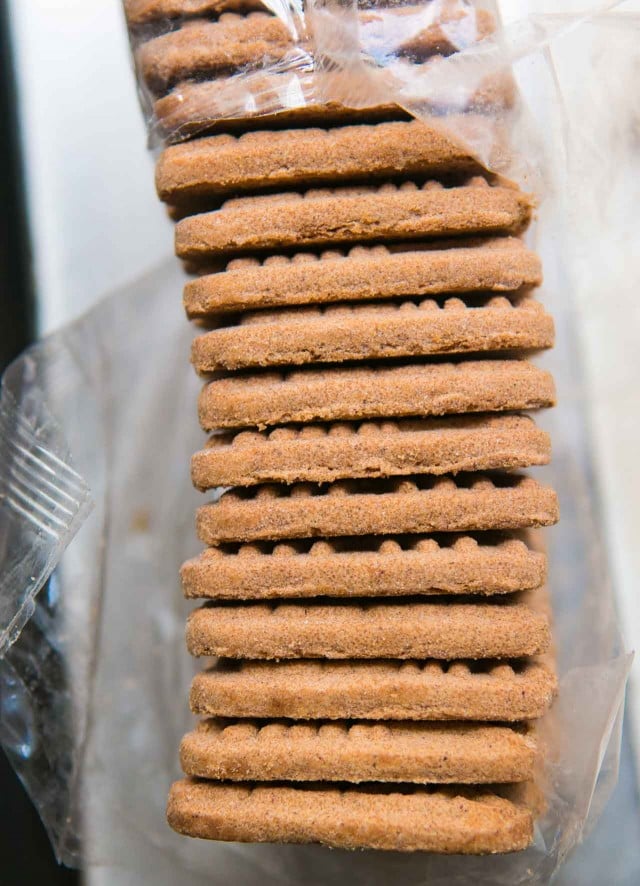 I used gingersnaps (spéculoos, in France) because we don’t get Graham crackers in France. And although I can make my own, I was so wiped out from trying to toast marshmallows while taking a picture of them that I went with store-bought cookies. For those who want to make their own, there’s a homemade Graham cracker recipe in my book, Ready for Dessert, that goes with the Lime Marshmallow Pie. Gingersnaps will add a little spicy component to the ice cream, which was rather nice with the almost-expertly toasted marshmallows and perfect fudge ripple that got swirled in ice cream. 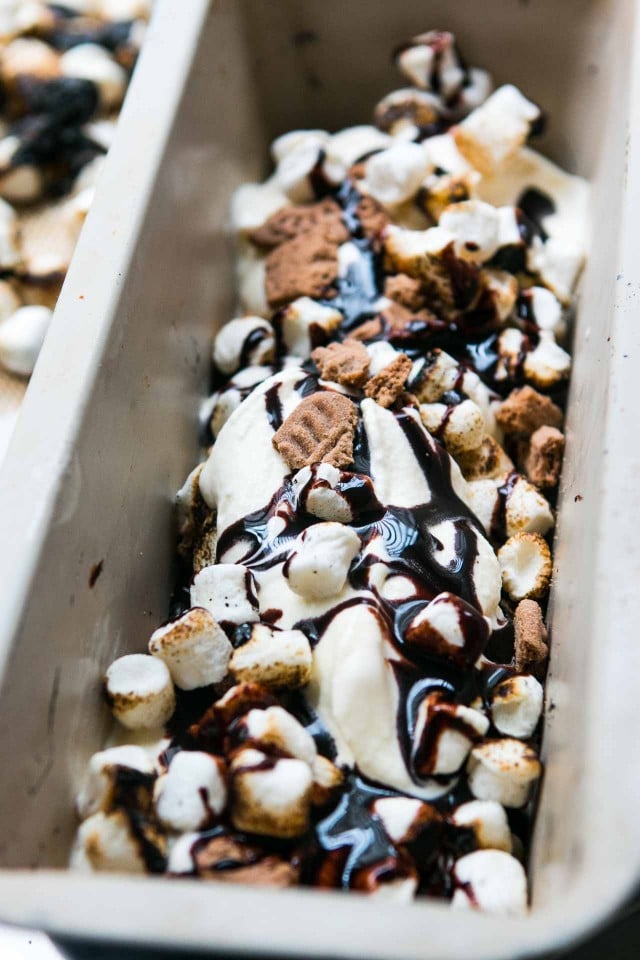 My French other-half said it tasted like something for kids. He meant that as a compliment. So you can indulge your inner enfant with this. 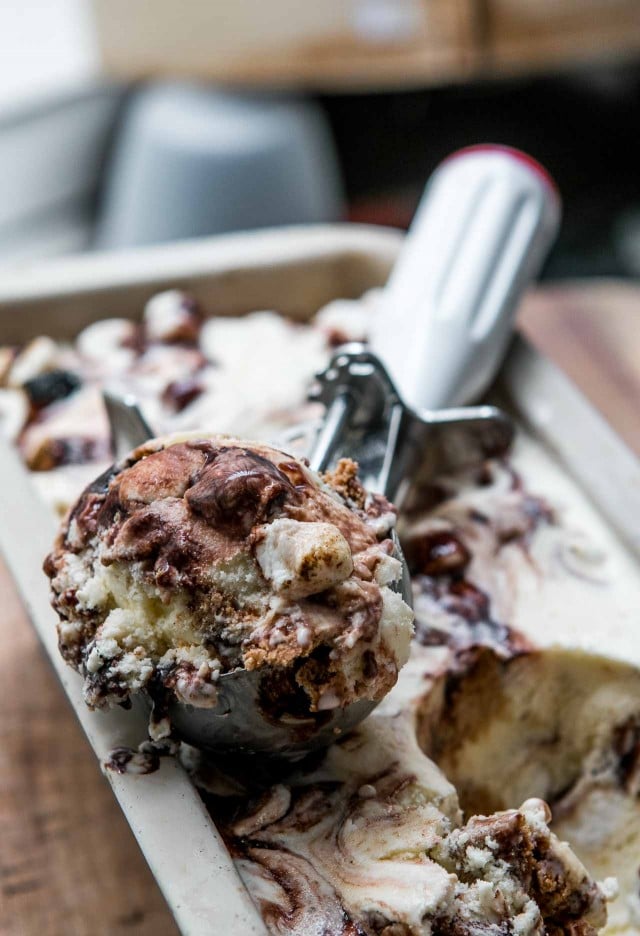 Be sure to work fast when layering the ingredients. I like to start with putting some of the mix-ins and some of the fudge ripple in the bottom of the chilled container – marshmallows, fudge, and crumbled crackers or cookies – then add a layer with just-churned custard, then more of all three ingredients, continuing until everything is used up. Avoid stirring because you want the chocolate ripple to remain distinct. Just layer ’em all up, and when you scoop, you’ll have big, moist pockets of dark chocolate and marshmallow. If you don’t have a blowtorch, you can broil the marshmallows on a baking sheet in the oven. Watch them carefully and turn them over as they brown. Can’t get mini marshmallows? Snip large ones into quarters with oiled scissors, or make your own marshmallows.
Ice cream base
1 cup (250ml) whole milk
2/3 cup (130g) sugar
pinch of salt
2 cups (500ml) heavy cream
5 large egg yolks
1 teaspoon vanilla extract
Fudge ripple
1/2 cup (100g) sugar
1/3 cup (100g) light corn syrup, or rice syrup, Golden syrup, or agave nectar
1/2 cup (125ml) water
6 tablespoons (50g) unsweetened cocoa powder, natural or Dutch-process
1/2 teaspoon vanilla extract
Mix-ins
4 cups (185g) mini marshmallows
1 cup (95g) crumbled Graham crackers or gingersnaps (about 10 cookies)
1. To make the ice cream base, heat the milk, salt, and sugar in a saucepan. Set up an ice bath by placing a 2-quart (2l) bowl in a larger bowl partially filled with ice and water. Set a strainer over the top of the smaller bowl and pour the cream into the bowl.
2. In a separate bowl, stir together the egg yolks. Gradually pour some of the warm milk into the yolks, whisking constantly as you pour. Scrape the warmed yolks and milk back into the saucepan.
3. Cook over low heat, stirring constantly and scraping the bottom with a heat-resistant spatula, until the custard thickens enough to coat the spatula.
4. Strain the custard into the heavy cream. Stir over the ice until cool, add the vanilla extract. Refrigerate to chill thoroughly, preferably overnight.
5. Make the fudge ripple by heating the sugar, corn syrup, water, and cocoa powder in a medium saucepan until it starts to boil, stirring frequently. Reduce the heat and let simmer for 1 minute, stirring often. Remove from heat and add the vanilla extract. Transfer into a small bowl and chill thoroughly before using.
6. To finish the ice cream, freeze the ice cream base in your ice cream maker according to the manufacturer’s instructions. Put a large (at least 1.5qt/l) freezer-proof container in the freezer, one that you’ll store the ice cream in.
7. While the ice cream base is churning, spread the mini marshmallows on a silicone baking mat, or another heat-resistant surface that’s non-stick. Wave a blowtorch over the marshmallows carefully, just enough to brown them. Turn them over with a spatula and continue to brown the marshmallows until they’re well-browned all over, as best as possible.
8. When the ice cream custard is ready, spoon some of the fudge swirl mixture on the bottom of the chilled container. Strew some of the Graham cracker bits over the chocolate and some marshmallows. Spread some of the just-churned custard over the mix-ins.
9. Continue to layer the churned ice cream custard spooning some of the chilled fudge ripple mixture over the custard along with toasted marshmallows and crumbled graham cracker bits. If necessary, stir it very, very, gently, just to incorporate the ingredients, but not enough to mash everything together, which will make the finished ice cream muddy. Once done, freeze the ice cream and let stand for a few hours in the freezer until firm enough to scoop.

The Easiest chocolate ice cream ever!

When to use, and not use, corn syrup