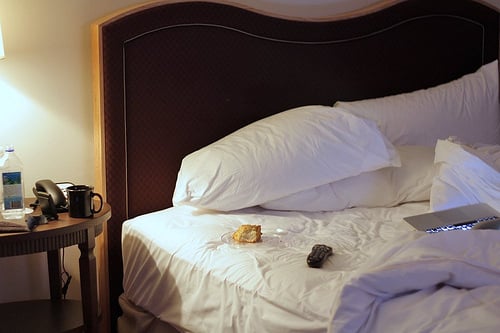 I’ve worked in the service industry since I was sixteen years old and realize how hard the work is, and how much the people who work in it are undervalued and generally underpaid. On a recent trip I stayed in quite a few hotels, a different one every day for a week, and realized they could be doing a few things that would make things more pleasant for guests, as well as make life easier for the good people that work there:

I’ve stopped taking home those tiny bottles of shampoo and body lotion. It’s not that I don’t like them, it’s just that I’m no longer that cheap and don’t mind spending a few dollars every couple of months to buy my own. I suspect most people that take them aren’t merely using them as travel-sized bottles for their carry-ons. I’ve always wondered what happens to those little bottles if I use them once. Do they get refilled, or tossed away? I assume they’re tossed, so I no longer bother to use them and bring my own. But for those who just have carry-ons, let’s all make the switch to using large refillable bottles.

2. Give me a checklist with checkboxes asking me what level of service I want.

I am sure there are people out there that like it when someone knocks on their door in the morning, asking if they’re in there so they can clean the room. And I am certain some people like it when they’re watching television and relaxing in the afternoon and someone stops by to see if they need the minibar filled, then thirty minutes later, another person comes by to lift the top of the sheet from the bed and fold it down, otherwise known as ‘turndown service.’

For those people, and for those of us who don’t use all twelve towels in one day, give guests a checklist when they arrive, asking them which services they’d like and which they don’t need. Then the service staff doesn’t have to worry about bothering guests and guests don’t have to worry about the staff coming into their rooms at all hours to put a chocolate on the pillow. Personally, I’d rather they leave a whole stack in the room upon arrival anyways.

3. Put instructions for connecting to the Internet, clearly stated, in each room.

If there’s anyone out there that doesn’t want or need to connect to the Internet when traveling, that’s great. For the rest of us, it’s our lifeline. I cry if I can’t get connected to the Internet. When I check in to a hotel, I’ve probably spent the morning battling lines at the airports and flying all day or night, and I’m not in the best shape to remember a gazillion details or verbal instructions or passwords.

To save me a call to the front desk, and to save the person at the front desk from receiving the same call they probably get from 98% of the guests five minutes after they land in the room, put a plastic-laminated sheet near the desk that tells you 1) What the charge is for Internet connectivity, 2) How to get connected, and 3) What the networks and passcodes are.

4. Decide whether you want to charge a gratuity or tip, but not both.

I always thought a tip and a gratuity were the same thing; a gesture of cash in exchange for good service. That’s the way it is in America, at least, and I’m fine with that. (Actually, I think it’s not such a great idea—but that’s for another post.) So how come whenever I order room service, on the bill are lines for ‘delivery charge’, ‘gratuity’ (added automatically) and ‘tip’?

As mentioned, I get the fact that a tip is a tip. And as far as I know, ‘gratuity’ is just another word for ‘tip’. As someone who rarely orders room service unless I have a very early morning flight (and believe me, anyone that has to deal with me first thing in the morning deserves something special), I understand that room service is a pain in the patootie for everyone involved, hence the marked up prices and appropriate charges associated.

Room service menus usually state something along the lines of “A service charge and 18% gratuity will be added to room service checks.” That’s fine and I’m down with that. So why is there a space on the bill to write in an additional tip? Or if not, why is the waiter hovering for a few minutes too long after they bring breakfast? (It can’t be because they want to spend more time with me.)

If they’re not getting that 18%, that’s just wrong. (However I was under the impression that the hotel got the delivery charge and the waiter got the tip. If not, why are they separated out?) If the servers merit their worth, pay them that or include that in the bill.

5. Get rid of the tips for bellhops.

They work hard, but I often found myself scrambling for small bills to hand out to everyone who touches my suitcases. But as much as I tried, I would sometimes find myself single-dollar(s) deficient. Why not raise their pay and up the price of the room a few bucks and reward those gals n’ guys for working so hard? Or for those who think that people won’t work hard unless they’re tipped (although I’d like to give them more credit than that), put a checkbox on our bill* when we leave for us to write in an appropriate gratuity. Or tip. (But both would be kind of a stretch.)

6. Put a coffee machine in every room.

The greatest joy in life is waking up, slipping on a bathrobe, and drinking coffee without anyone bothering you. I live for that moment every day. And when I check into a hotel and see a stocked coffee bar, I want to hug it and take it to bed with me. (And yes, I would buy it room service for breakfast in the morning.)

The coffee is usually just okay, and I know one can order an Aeropress or Handpresso and schlep that along. But as much as I would like to consider myself an annoying coffee snob, at 6:45am, I’m just happy to have something strong and warm in bed with me. (And I’m not talking about a plastic coffee machine…)

Even better is that you could make a deal with one of those capsule-taking espresso machines and sell the capsules as part of the minibar. I’m not a huge fan of some of the coffee that comes out of them, but I am certain that at least one company would love to have their machines featured in rooms for guests to try. What a marketing coup!

7. Get rid of the minibar service charge.

I understand why the prices are so high in the minibar; it’s usually late at night, or you’ve had a long day, and it’s just not feasible to go out into the night to find a 2 ounce bottle of whiskey. But what I don’t understand is the 10% service charge added. Does the housekeeper get that money? If so, that’s fine. But I doubt it. (And I’m happy to be proven otherwise.)

If not, just include whatever “service” goes into the work that’s done filling up that lil’ fridge that the hotel has to cover. Why is it separated out? (And please don’t say that it’s to cover the extra costs associated with stocking the bar. If the $45 for a half-bottle of California Chardonnay isn’t covering the costs of that bottle, I’d switch to another wine.)

8. Keep up the good work with the fantastic bed and comfy sheets.

I love how hotels have dialed up their sheets and bedding. In fact, I stayed at one place and the sheets were so good, if I wasn’t such an honest sort, I would have stripped the beds—at the risk of making the coffee machine jealous—and taken them home with me.

A few times I found it hard to get out of bed, and each night the idea of diving in to those lovely sheets and terrific mattress made all the difference in the world. As someone who spend nearly 95% of his time in his hotel room in bed, thanks for thinking of me.

*Yikes! This one is probably going to rile a few. As stated, I want those fine young men and women to get compensated for their hard work. Lifting luggage certainly isn’t a walk in the park nor is standing out in the heat or freezing cold. And I would likely tip them even more if I could just write in an amount to add to my bill.

**For those eagle-eyed readers who point out the bottle of water on the nightstand, I don’t usually drink bottled water but like visitors who come to France and ask me “Is it okay to drink the water?”, I had the same questions about water in the states. But in spite of any reservations, I refilled it with water from the tap.