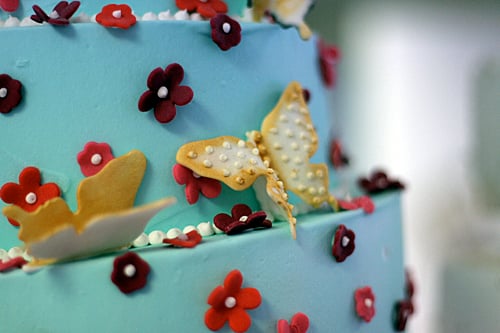 This weekend, I’m going to my first-ever French wedding. I don’t know if the Bridezilla phenomenon has taken root in Paris, but my friend insisted, nicely, that her gâteau de marriage be one flavor in particular: carrot.

I’ve written about a carrot cake before, but she wanted a nice and tall one – with lots of billowy cream cheese frosting, bien sûr! 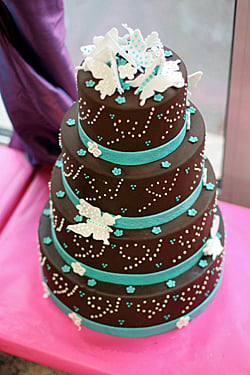 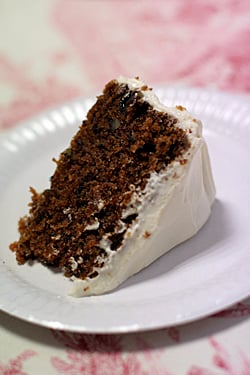 Normally when couples in France tie le nœud, a croquembouche serves as the wedding cake, which is a towering cone of sticky cream puffs filled with Bavarian or pastry cream, then drizzled with wispy caramel strands, tying whole damn thing together.

Personally, I don’t mind croquembouche, but if I had a choice, I’d choose carrot cake, too. Especially one with lots and lots and lots of cream cheese frosting. 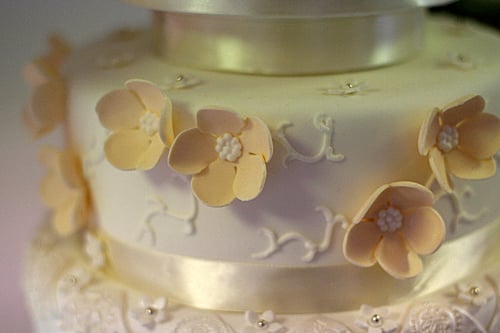 We made the trip to a place I heard about near Paris which specialized in American-style wedding cakes, named Wedding Cakes Avenue, on a Friday afternoon for a tasting, during the annoying, but inevitable, rush hour traffic on le périphérique; the highway the encircles Paris. Fortunately the bride isn’t a Bridezilla, and handled le bouchon (bottleneck) like a pro-Parisian, and there was no endless honking and huffing and slamming of her hand on the steering wheel repeatedly.

When we arrived, she quickly found a parking place (illegal, of course…after all, she is Parisienne…) and we tumbled out of the car in search of the bakery. 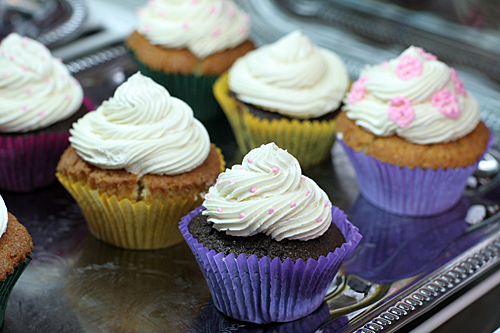 To be honest, it’s wasn’t all that difficult to find. I mean, how many bakeries have American-style wedding cakes lined up in the window, and signs advertising cupcakes* and chocolate chip cookies, in France?

(*And I know all you Americans living here want to ask the same question I asked: “Where did you get those colored cupcake cups!?” Her answer: “America.”)

Once we took a look at everything, we gathered ’round a table and tasted, sampled, and discussed. 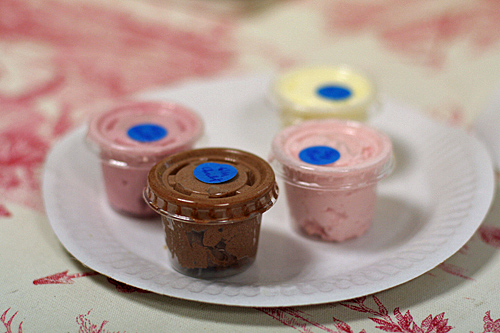 After each of us neatly polished off a rather hefty wedge of cake, we also tasted a variety of cream fillings, which traditional wedding cakes usually feature. But our bride-to-be was having none of that foofy stuff and she dug in her heels and stuck with the real-deal: Philly-frosting, which Jenny, the baker, decorator, and owner, ship from Belgium. For some reason, it’s about 75% cheaper there than it is in Paris. Certainly a valid reason to visit our friends up in Brussels more often. Eh? 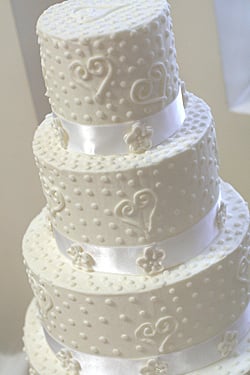 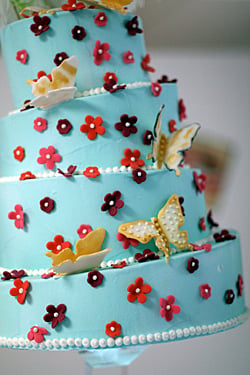 So this weekend is the big fête, and I’m anxious to see the finished cake, and to see how many of the fifty French guests react when they see a towering spire of cream cheese-frosted cake, topped with flowers, covering spiced layers of carrot-flecked gâteau américain. I suppose if they don’t get it, they can drink plenty of the Champagne the hostess is offering. She called me in a panic, noting that she only had 48 bottles for 50 people. That’s about a bottle per person which, personally, I think is a pretty good ratio.

However I am quite upset about something.

When we left the wedding cake shop, there was half a cake leftover from the sample they made for us, which was handed over to the bride. I guess it is her week and all, and she’s entitled to amenities like free (albeit illegal) parking, an extravagant dress that she’ll only wear once, and yes, an all-American cake for that big day. Except ever since that day last week, I’ve had a groom-sized hankering for a piece of carrot cake, which I’m going to have to wait until Saturday night to indulge in.

But you can be sure I’ll be right there, as slices of that carrot cake are being cut, waiting for my piece with a coupe de Champagne in tow. I just hope there’s plenty on hand.

Other places that make American-style wedding cakes in Paris:

Sugar Plum Cake Shop (I love this place, and my write-up is here, with photos of their work.)