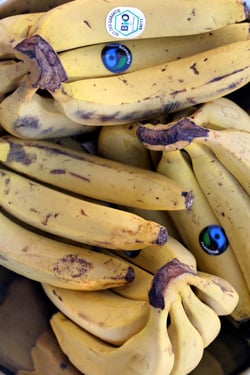 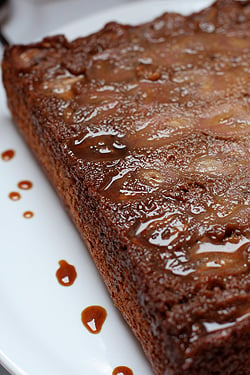 I’m happy to be taking care of two things with this recipe. One is that about a week ago, I was late to the market, arriving near the end, when everyone was packing up to leave. Scanning quickly to see what I could procure in a short amount of time, I passed by a stand where one fellow lorded over an enormous pile of organic bananas, and was hollering, “Un euro, deux kilos!…Un euro—deux kilos!”

Since that’s roughly a buck for a little over four pounds of fruit, I stopped right there, and took as many as I could carry off his hands. And then, he threw another bunch in my basket after I paid. So I had a whole bunch of bananas…five, to be precise…which was great. But I was a little concerned about having what looked to be like around fifty bananas for just one person. 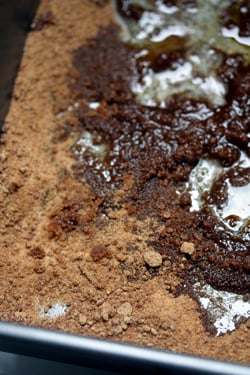 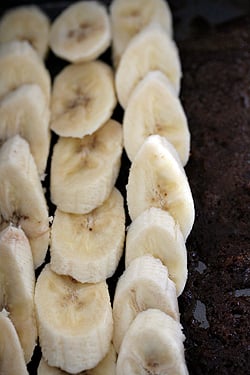 Once home, as they started ripening during the week, seemingly all at once, a mild panic set in. So I called into service a recipe from my archives, one of my all-time favorites: Banana and Chocolate Chip Upside-Down Cake.

When I had my site revamped a few years ago, recipes from the older site weren’t able to be part of the transition. So they’re still there, in the old format, and I can’t change them nor can readers comment. And I kind of forget about them, until someone mentions them to me. So aside from making a dent in my banana stash, I got to re-visit that recipe.

(Plus, in a burst of altruism, I was able to take care of a third thing, helping the poor mec out: he didn’t have to pack up all those bananas and carry them back with him.)

The recipe for this cake is something I developed for a magazine that specialized in low-fat, or “healthy” food quite while ago. Instead of feeling cornered by having to bake with that restriction in mind, I found it a good challenge, because you can replace the traditional overload of butter or eggs with things like chocolate and fruit puree. Not that they have less calories, but you can easily get away with using less of the ‘forbidden’ ingredients, if you replace them with very flavorful ones. 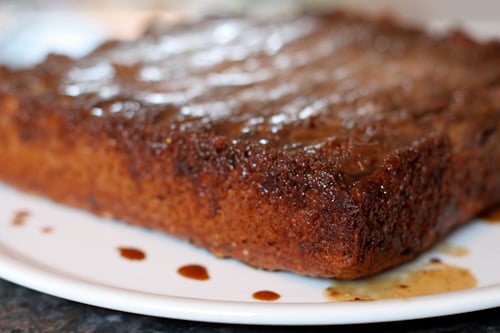 Here I used ripe banana puree and low-fat sour cream. You can use regular sour cream, but once baked into the cake, if anyone can tell the difference, I’d say that’s one sharp palate they’ve got there. And I use chocolate pieces, which give the cake little bursts of chocolate flavor, and happens to be exactly the right of chocolate to go along with the the bananas in a pool of deep-dark sugar. 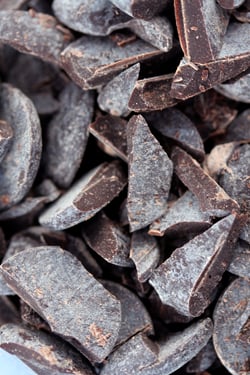 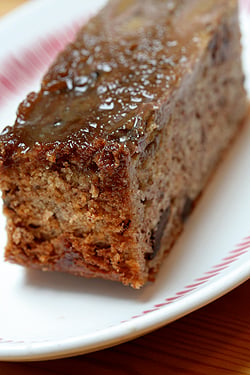 Every time I make this cake, I wonder why I don’t make it more often. Who wouldn’t like a tender cake studded with melting chunks of chocolate, the rich-tasting batter scented with a hint of cinnamon, and rows of bananas lined up on top, gooey and caramelized in a pool of brown sugar topping? 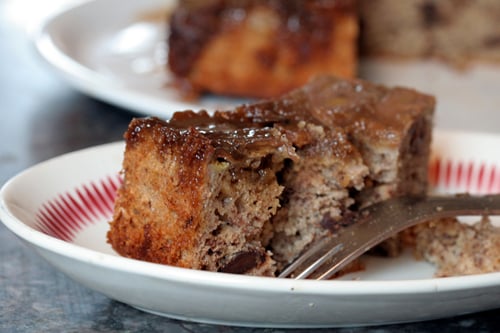 Curiously, once I got through all the bananas, I was at another market yesterday—late again, and the same thing happened. I guess there must be a surfeit of organic bananas in Paris right now. Which, once again, I’m peeling through as fast as I can.

When I originally developed this recipe, as mentioned, I was writing for a magazine that requested low-fat recipes, hence the single egg white. But if you’re not all that concerned, simply add an additional egg, yolk and all, and reduce the sour cream by one tablespoon. If you live somewhere where sour cream isn’t available, you can use buttermilk, plain whole milk yogurt, or fromage blanc. You’ll notice that you can use either butter or water in the topping. If you’re skeptical, I can honestly say that the non-butter version is really good. But for non-believers, go ahead and add a few tablespoons of butter instead.
For the topping:
1/3 cup plus 2 tablespoons (60g) packed dark brown sugar
2 tablespoons water or butter, cubed, at room temperature
3-4 ripe medium bananas
a few drops of lemon juice
For the cake:
1 1/2 cups (210g) flour
1 teaspoon baking powder
1/2 teaspoon baking soda
1/2 teaspoon salt
1 teaspoon ground cinnamon
3/4 cup (150g) granulated sugar
2 tablespoons (30g) melted butter, salted or unsalted
1 large egg
1 large egg white
1 cup (250g) banana puree, about 2 bananas
1/2 cup (120g) sour cream, regular or low-fat
1/2 teaspoon vanilla extract
1/2 cup (80g) chocolate chips or chopped bittersweet or semisweet chocolate
1. To make the topping, place the brown sugar and water or butter in an 8-inch (20 cm) square cake pan. Warm the pan directly on the stovetop over low heat, stirring until the sugar is thoroughly moistened.
If using water, simmer the mixture for about 45 seconds. If using butter, stir just until the sugar is moist and bubbling, then remove from heat. (It won’t melt completely smooth, and there may be a few bare spots, which is normal.) Let cool to room temperature.
2. Peel and slice the bananas in 1/4-inch (1 cm) slices. Arrange them in slightly overlapping rows over the melted brown sugar. Sprinkle with a few drops of lemon juice.
3. Preheat the oven to 350ºF (180ºC).
4. Whisk together the flour, baking powder, baking soda, salt, and cinnamon in a large bowl, making sure there are no lumps. Mix in the granulated sugar.
5. In a small bowl, mix together the butter, egg, egg white, banana puree, sour cream, and vanilla.
6. Make a well in the center of the dry ingredients and stir in the wet ingredients until almost combined. Do not overmix. Gently fold in the chocolate pieces.
7. Scrape the batter into the pan over the bananas, then use a spatula to carefully spread the batter over the sliced fruit.
8. Bake for 40 minutes, or until the cake feels just set in the center when you touch it.
9. Cool the cake for about 20 minutes, then run a knife along the edges of the cake to help it release from the pan. Invert the cake onto a serving platter.

Serving: The cake is best served warm with whipped cream, vanilla ice cream, or by itself as a snack. If made an hour or so in advance, it can be inverted on the serving platter, and left with the cake pan over it, to keep it warm. Otherwise is can be rewarmed in a low over, covered with foil. Or enjoyed at room temperature.

Storage: The cake can be made up to two days in advance, although it is best the day it’s made. To freeze it, wrap it securely in plastic wrap; it can be frozen for one to two months.