When I heard there was going to be an inaugural voyage for the recently refubished Club Med 2 sailboat, I was so excited to go, that I actually invited myself to come along. Since the trip was a press preview, with a sprinkling of the rich and perhaps famous to rub elbows with, and since I lived so close, I saw no reason why I shouldn’t be able to easily race down to catch some sunshine, and participate in the buzz—cruising past St. Tropez, Cannes, Nice, and Portofino. 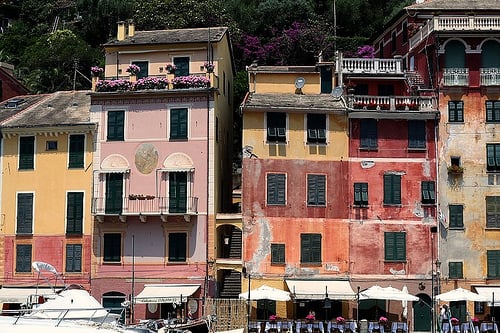 So after spending a few days on land in Provence, I was ready to set sail and meet my travel mates. Having not gone on many press trips, I wasn’t sure what to expect and happily, our rag-tag group was from all over the map: Japan, the United States, Switzerland, Canada, Australia, Italy, and, of course, France. We boarded boat and set sail eastward. 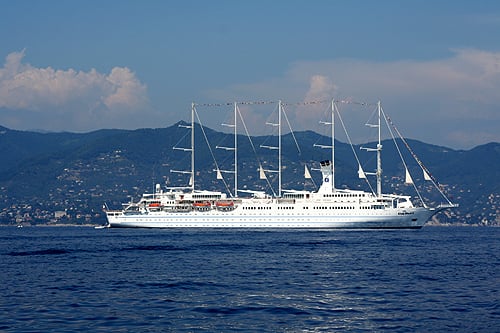 I’d been on one boat before, a medium-sized cruise liner, and was less-than-impressed with that one. It was freezing cold from the boat being severely overly air-conditioned, so I was wearing sweaters indoors, while sunny Mexico was right outside. Not only was it cold physically, it was also uninspiring and I felt like I was on a floating hotel, it was so big and impersonal.

But this was a small vessel, a 5-masted sailboat, with less than two hundred rooms and sure enough, it was just the right size and pace for cruising the Côte d’Azur.

The boat had just been completely refurbished and I loved my room. I pondered how I could move it, and the view from the portholes, back to Paris. 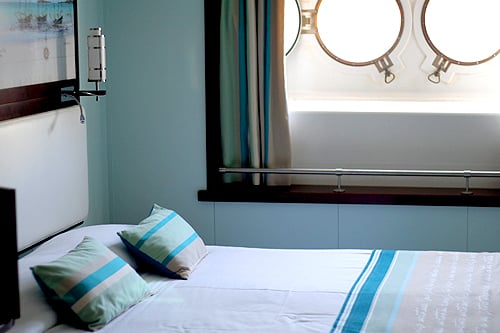 Lots of events and activities were planned, but I was mostly interested in meeting the chefs. So while everyone else was taking tours of the engine room and the luxury suites (it was probably a good idea I didn’t see them, or they would’ve had to drag me out, clutching the sides of the door), I made plans to visit the kitchen. Where I always feel home.

When I walked out of the plush hallway, and the world of the guests, behind-the-scenes into the stainless-steel kitchen, where all the food gets prepared, I met young pastry chef Arnaud Baudouin and bread-maker Philippe Kangat. 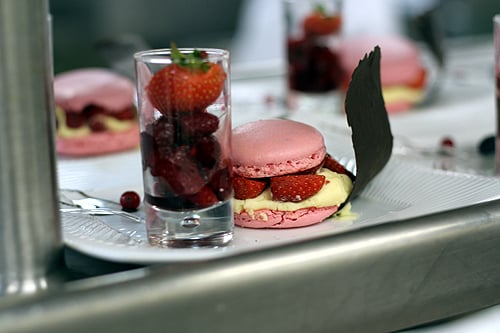 Lest anyone think French chefs are mean and grouchy, you can see from the looks of these two that’s they’re anything but. In fact, they looked so content, that I would’ve been happy to spend the rest of the trip in the kitchen, giving them a hand.

Okay, not really.
But still, they were obviously happy doing what they do. 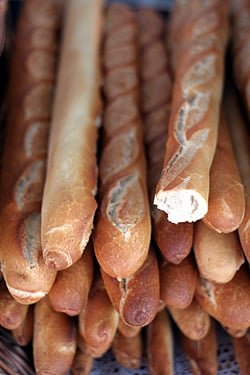 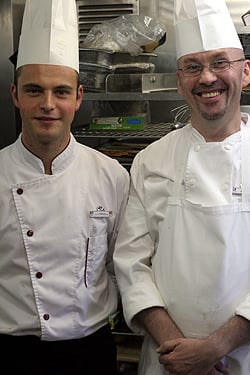 Later that night, though, I got pulled back into the kitchen where they showed me what they’d planned to serve for dessert. Puffy-crisp raspberry macarons lined the counters with a wave of dark chocolate breaking alongside, and what I’m not showing are the warm chocolate cakes they were plating up. But I got the recipe ; ) 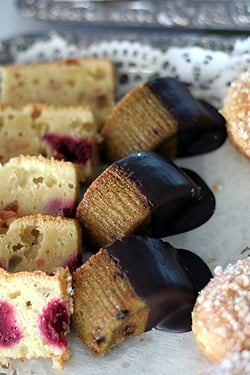 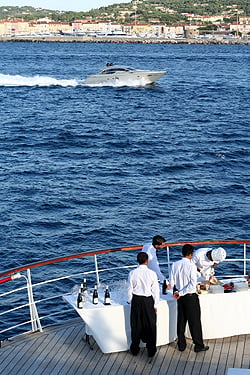 Another great thing I liked was the beautiful trays they set out for afternoon tea. The pistachio financiers dipped in chocolate were so huge, they were cut in half for those dainty European appetites. Of course, I had two halves, since everyone knows that two halves have less calories than one whole one. Right? 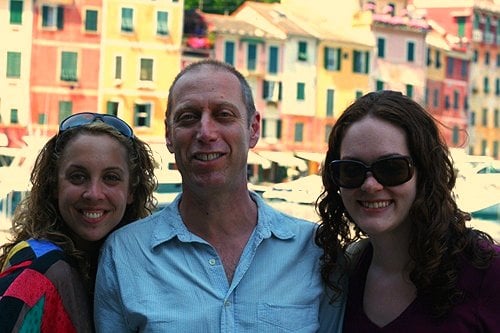 I met some really lovely people from all over the world, but had an especially good time with Sarah and Shira. Both are journalists, but since Shira works extensively in the world of red carpets and show-biz, I glued myself to her and got the most amazing gossip about everyone from Brangelina to Madonna. And now she has some on me—gulp! So if you read about me frolicking on the Côte d’Azur in The Star or In Touch Weekly, don’t believe a single word of it. I’m denying everything. 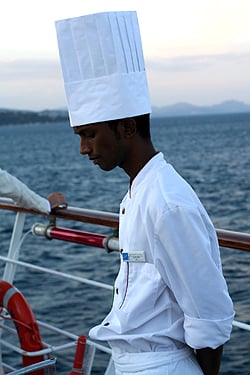 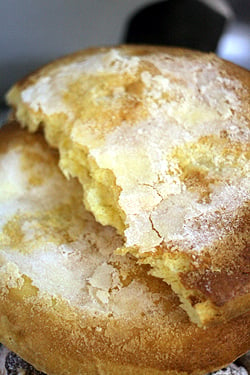 The other thing that I loved about this vacation is that sports and classes are included. Like, completely. And that, coupled with the fact that I’m not getting any younger, figured that was my cue to learn to play golf when on land before we shoved off on the boat. 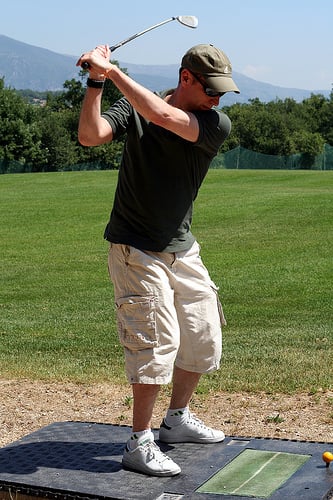 I managed to get a few good swings in and although I would’ve liked a little more attention (as you can see, the instructors were more interested in something…or more likely, someone else…but with a backswing, and fesse like that, can you blame them?), I got some good advice and hope to eventually increase my success as a swinger. 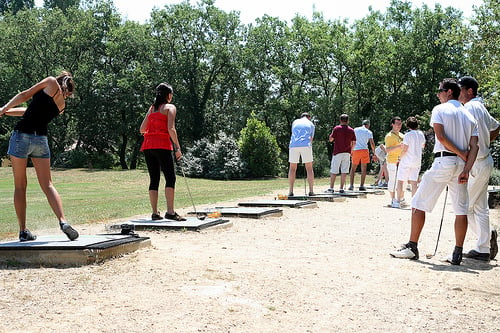 But things were heating up, so I hit the pool then retreated for lunch and rosé. Not being a fan of buffets, especially when most of the guests are from a culture where lining up isn’t one of their better-known attributes, there was always a choice between choosing something healthy… 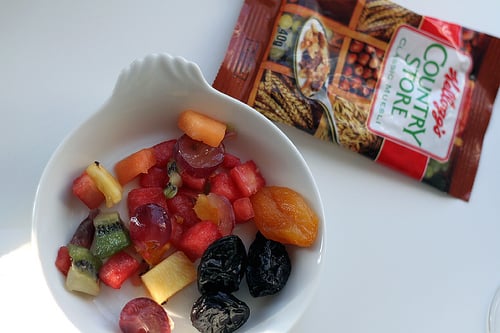 Or something a bit less so. 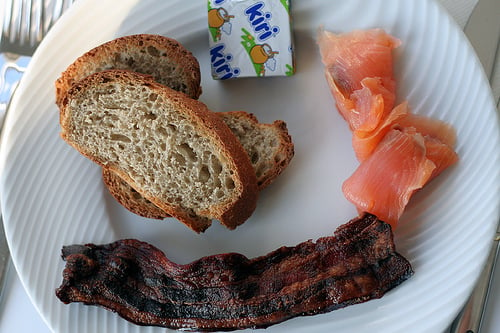 And I learned that all Club Med’s are not created equal, as there wasn’t a single slightly-humidified Oreo to be found, as there was in the Bahamas.

When I asked, they said that the French wouldn’t be as, um, appreciative of the charms of chocolate-sandwich cookies with sugary cream filling. And while I reluctantly agreed, I was also thinking, how do they know unless they try them? And I would be willing to be shoved aside, in the name of international understanding, just to let them in on our little secret. After all, I’d taught Romain the benefits of crispy bacon at Columbus Isle and he quickly joined the cult of that, too. 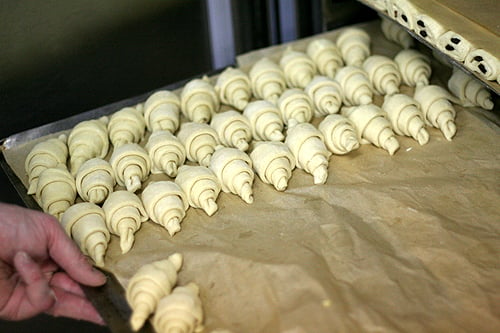 Also for breakfast and lunch, there were loaves of the famous white chocolate bread, nearly-petrified bacon (just the way I like it), French and Italian cheeses, tropical fruits piled high, and just-baked croissants. 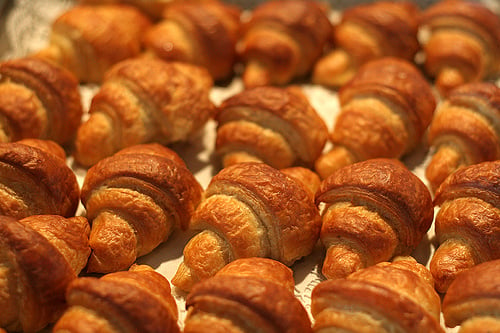 And can I just say a little more how much I loved the staff? I swear, I had at least fifteen bromances with the charming fellows who manned the bars, espresso machines, and effortlessly served us in the dining rooms. 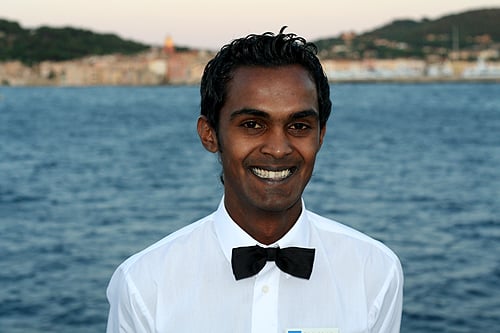 Most of them were from Mauritius, a multilingual isle where they obviously put something in the water to make everyone absolutely charming. (They should try it elsewhere.) And if anyone thinks that eliminating the tip system, which is part of the all-inclusive vacation concept of Club Med, means that servers won’t do a good job, they should spend a few days with these amazing guys. 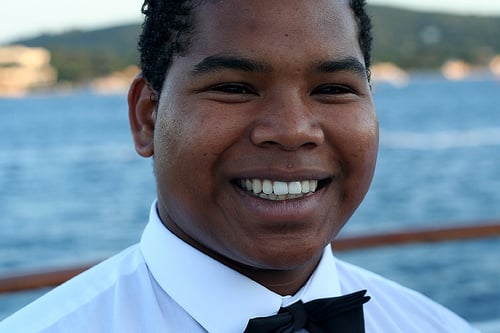 My very favorite was Christopher, who was très charmant and had such an adorable grin, that I just wanted to candy him and take him back to Paris with me. 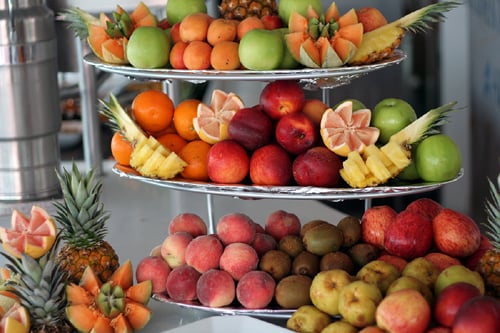 But the sweetest part of the trip was the day we were docked in Portofino. It was a charming little town, although a bit touristy and hotter than you-know-where, so I headed back to the ship before the others I went ashore with. After a dip in the saltwater pool on the very top deck of the boat, I was cooling myself down with a small sip of cold wine, leaning over the back railing, and noticed a swarm of water skiers far down below.

The night before, the head ski nautique instructor was trying to convince me to give it a go, and I thought, “No way in heck am I going to attach myself to a speeding boat motoring across the deep-dark waters of the Mediterranean, and make a fool of myself in front of everyone on the boat.” 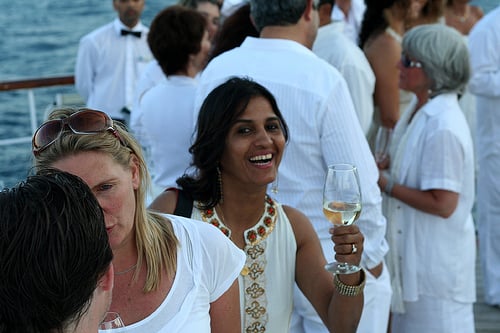 And then it hit me.

Since I only had about one-quarter of a glass of wine, I knew it wasn’t that talking, but something in my head said, “David, when are you going to have another chance like this in your life?” I’m not one to take chances, but I ran down the stairs, put my name on the list of participants, slathered on a lot of crème solaire, and waited my turn.

One of the instructors suited me up in an orange life jacket, gave me a quick lesson on how to stand up (a technique which goes opposite of every instinct that I know), got fitted with skis, then was shoved out into the luminously-blue Mediterranean. 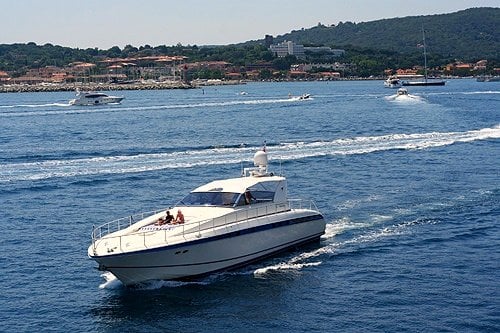 As I scrambled to grab the life-line that was thrown to me, I tried a few times, had a few false starts, but didn’t make it up. So after about five or six tries, it was back to the boat so the next person waiting could go out for a spin.

But the GO (gentil organisateur) at the club put my name at the tail end of the list without telling me, and when I saw what she had done, I considered erasing it, but figured I may as well give it another go. After all, how many times am I going to get a chance to be out in the middle of the Mediterranean, surrounded by luxury yachts and posh villas in the hillsides, whiles the sun beamed down upon me, and a lavish dinner and a fully-stocked bar awaited me later that evening?

And so, I let myself get pulled back out to sea as the sun was lowering in the sky. Gradually the small boat picked up speed, and as I held onto the rope, I calmly began to follow the instructions I’d been given before, which I had no success with prior. But prodded by the driver of the boat who used his hands to motion to me to stand up, voilà…there I was!

I know I should’ve been so scared that I would have an accident right there (speaking of embarrassing…), but there I was, riding the wake of the boat as he picked up speed, and we made a big, wide circle around the deep-blue water, which I skidded effortlessly across. And when I got back, everyone gave me a burst of applause and all I could think about was when I could do it again. 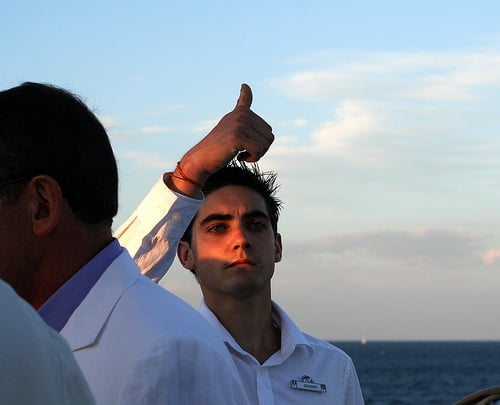 After a nice, hot shower, I changed and headed upstairs to meet my traveling companions for dinner. I started to tell them that I think that I had just had one of the best afternoons of my life, but I wasn’t sure I could express how exhilarating it was. And how happy I felt that I was able to just jump in and do something, without prodding or goading, and even more importantly, without fear. 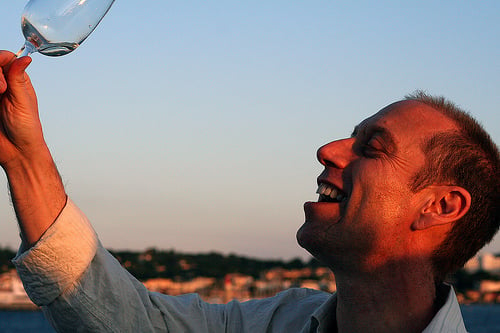 So I toasted myself, a celebration that was definitely bien mérité.