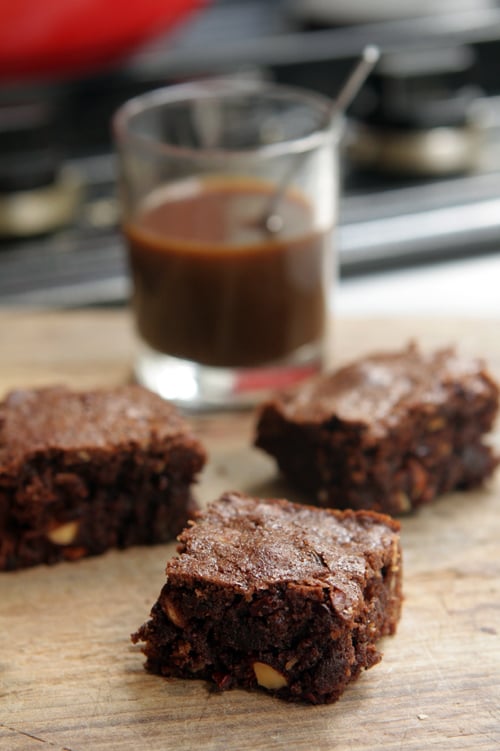 Where I grew up, we were neighbors with the Hepburn family. They were very nice people and were considered “walkers”, those curious people who live in suburbia that walk, rather than drive everywhere. We used to see them walking all the time and we’d always give them a wave. And then, we’d hit the gas pedal and keep driving.

We didn’t mingle much, and I didn’t see the most famous member of their family since she lived down by the seashore. Perhaps it was a mixed blessing that she didn’t live all that close because she was reputed to be a handful at the neighborhood meetings where she lived, and was said to be pretty sharp with a retort. But I don’t deal in celebrity gossip and as they say in New England, “High fences make good neighbors”, and we all kept to ourselves. Although word has it that she made excellent brownies, which I never got to sample from her oven, unfortunately. 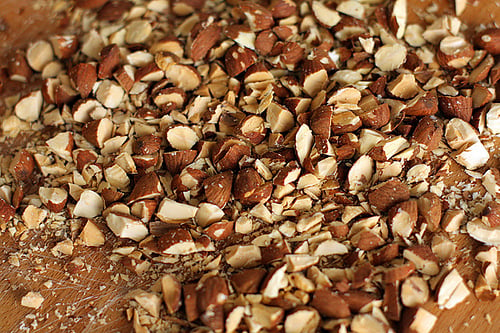 Years later, when I went to chocolate school in Belgium, I asked why unsweetened chocolate, which we frequently use in recipes in America (especially brownies), wasn’t easily available – or used – in Europe baking as well. And the folks at Callebaut Chocolate Academy didn’t really know either but told me that almost most of what they made was for the American market.

I didn’t quite understand it, but it makes sense if you remember back when we used “squares” of unsweetened chocolate in recipes, which was how chocolate was sold way-back-when. (It’s a curious paradox though, since Americans have a reputation for liking things on the sweet side.) So when I saw a hefty, solid block of unsweetened chocolate (called pâte de cacao, or cocoa paste, in French) at the giant restaurant supply store outside of Paris, I grabbed it. 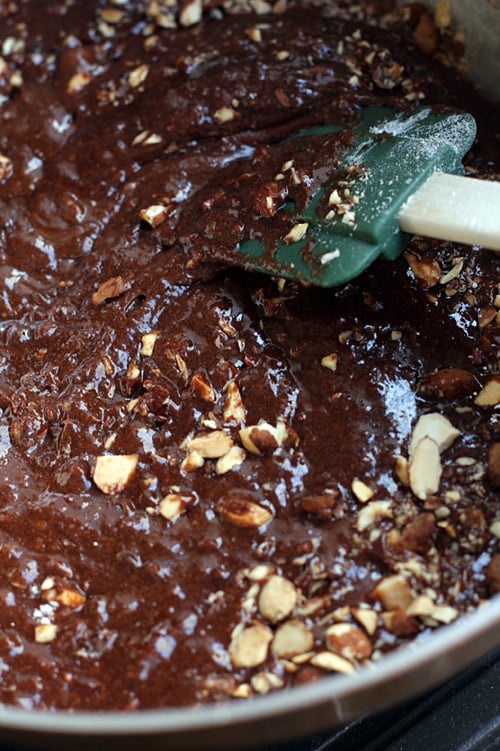 It wasn’t until a few months later, as the block sat unopened on my shelf, that I realized – What the heck am I going to do with 8 pounds of unsweetened chocolate? Then I remembered Dave and Kate’s Brownies. I had included the recipe in The Great Book of Chocolate, adapting it and making a few changes.

But I kept it mostly intact as I didn’t want to be famous for the one who incurred the wrath of Katherine Hepburn. So for those who want to omit the nuts, reduce the sugar, use another chocolate, or mess around with it in any way, well…consider yourself warned.

Adapted from The Great Book of Chocolate These are very traditional American brownies. They’re a cross between cakey and chewy, with the deep, dark flavor of chocolate. I made them a couple of times during the past week, since they disappeared rather quickly! (And since the recipe only uses 2 ounces of chocolate, I am chiseling away at the other 124 ounces.) You should chop the nuts a little finer than shown in the post as it will make them easier to get cleaner slices. If you want to omit the nuts, you probably can. Just don’t tell Kate.
8 tablespoons (115g) unsalted butter, cubed
2 ounces (60g) unsweetened chocolate, chopped
1 cup (200g) sugar
2 large eggs, at room temperature
1/2 teaspoon vanilla extract
3/4 cup (75g) nuts, chopped
optional: 1/4 cup (25g) roasted cocoa nibs
1/4 cup (35g) flour
1/4 teaspoon salt
1. Preheat the oven to 325ºF (160ºC.) Line an 8-inch (20 cm) square pan with a large rectangle of foil, leaving the overhang over the rim of the pan. Butter or spray the inside of the foil lining the pan with nonstick spray.
2. In a medium saucepan set over very low heat, melt the butter and the chocolate, stirring frequently, until the chocolate is melted and smooth. Remove from heat and stir in the sugar, then mix in the eggs and the vanilla extract.
3. Stir in the nuts and cocoa nibs, if using, then the flour and salt. Scrape the mixture in the prepared pan and bake for 30 minutes, or until the brownies feel just-set in the center. Remove from oven and let cool. Once cool, lift the brownies out of the pan by grasping the foil overhang, the cut the brownies into squares. 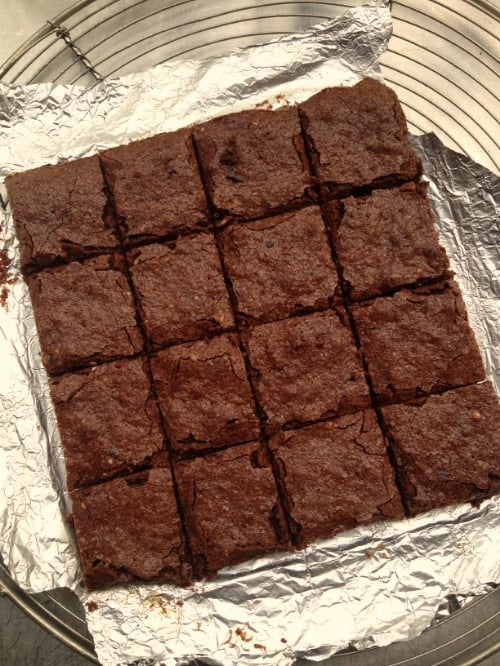