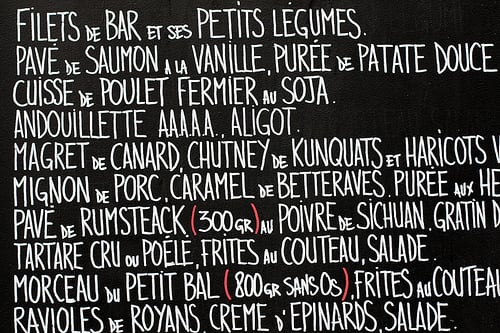 One of the things that really wows me about Paris isn’t the chocolate shops, the bakeries, the outdoor markets, or the way people let their dogs just go wherever they happen to want to go; it’s the handwriting.

The French have always been expressive, and expansive, letter writers. If you don’t believe me, you can find online and in books, elaborate forms, templates, and discourses on how to write a letter in French, including the proper opening and closing phrases to use, which, of course, vary tremendously depending on if it’s a formal or familiar contact you’re penning that letter to.

I tend to want to end all letters simply by saying “Cordialement, David”. Because it just seems so easy and to the point. I’m both cordial and polite at the same time, as well as terse and in my book, that’s the trifecta. Or maybe because I live in the age of Twitter and text messaging and tend to write in sound-bites. Or more likely, I’m just too lazy to do the hours of research to find the right way to open and close a letter in French.

“Look it up? Surely you jest!” you might respond. Well, yes, and no. The other day I got an urgent letter from the French office that handles my health insurance (or sécurité sociale, as they say, which is often shortened to la sécu because either the French are as lazy as I am, or they’ve just had it with trying to pronounce all the lengthy monikers for government agencies; mine is AGESSA, which means Association pour la Gestion de la Sécurité Sociale des Auteurs – whew!) which, of course, used all the right formalities. I had a major panic attack because I couldn’t find my French-Anglais dictionary that has a substantial portion in it devoted to depicting the myriad of ways to write letters, e-mails, faxes, and any other correspondence in France.

Because the letter required my urgent and distingué (distinguished) attention, I literally spent forty-five minutes trying to figure out which salutation I should use for opening and closing such a letter to respond with the enclosed check. If it’s to a woman, how do I know if she’s Mademoiselle (young and not married) or Madame (married)? As the author penning the letter, you never refer to yourself as Monsieur David Lebovitz; I’d always be just David Lebovitz. So you never know when a woman is writing you how to address her back. Which I why I keep wishing that only French men would write me…and no, not for reasons you might expect.

Once you get the opening salutation and first line out, then there’s the letter, which is the least of my problems. However to finish things up, there’s the all-important closing of the letter. I’ve seen complex, highly detailed charts explaining the various ways to close a letter in French.

To summarize, it’s at least two lines and can end anywhere from Cordialement (which you never really use, unless it’s a friend) to “Je vous prie d’accepter, Madame/Mademoiselle/Monsieur, l’expression de mes sentiments distingués.”

Now if that doesn’t throw your spell-checker into a tizzy, I don’t know what does. It means “I pray that you accept, Mrs, Miss, or Mister, my distinguished sentiments.” But if you do use it,  you need to be careful because you would not use the word “sentiments” if you’re writing to a man because it was infer feelings of l’amour. If part of the French motto is égaltié, along with liberté and fraternité, shouldn’t all letter recipients be treated equally? And not to mention how it would make my letter-writing life easier…and how much extra free time I would have.

(When I first got messages from close French friends, men and women, that were signed “Je t’embrasse David”, which literally means, “I hug you, David” I got a little warm and fuzzy inside. But I also got a little concerned because the French don’t hug, and wasn’t sure how to respond. When I go back to the states and everyone wants to hug me for an extended period, I get a little unsettled by the full-on full body contact. The idea of a French person, even a friend, plastering themselves against me is a bit suspect.)

I’ve had to “pray that my distinguished sentiments” will be accepted by my bank, the national railroad company and the French government (but only by the women who work there – sorry guys), but also by my ex-internet and telephone company as well, when they disconnected my service, otherwise known as The Worst Three Months of My Life. And yes, even the letter I wrote to the president of Ladurée explaining how they kicked me out of their store, who is a man. Which probably explains why I haven’t heard back.

I do have to say, I have pretty good penmanship, but it’s nothing like the calligraphie of the French. Theirs can be absolutely unreadable, but is always done with so much flair and polish, that it’s hard to fault them. (Even though they spelled kumquat wrong, I would have a pretty hard time criticizing the person who wrote out the elaborate menu above. The cook who came up with “Chicken thigh with soy bean sprouts”, however, might have some answering to do…) The French education is notoriously rigid and I am certain that young folks have so much perfection drilled into them that if they write a millimeter outside the square grids of that graph paper they use to write on –  which I find hopelessly annoying; there’s so much going on on the page that I can barely read what I’ve written – that they get a good French-style scolding.

And in spite of their desire to think of themselves as courageous individuals willing to buck a system that is unfair to “the people”, hence the uptick in smoking since it was banned, and rampant line-cutting, folks tend to fall back into the comfort of la fraternité if the situation merits it. Such as when one group goes on strike, the rest tend to take a day off from work follow suit, in support.

Handwriting, however, is what really separates one French person from the next. And in this age of text messaging and e-mails, it’s comforting to see that each café menu is still treated like a work of Louvre-worthy art, scribbled and sketched to perfection; even if it’s cursively cruel to the eyes and impossible to decipher. It’s a skill that I admire. Thankfully, I don’t have to write any letters today, by hand or otherwise, and will use that extra time to have lunch with a friend. Where I can express my distinguished sentiments (to her, of course) in person.