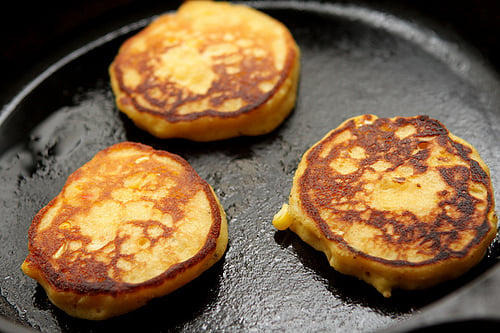 No one’s been quite been able to explain the popularity of canned corn in France to me. But the explanation of why fresh corn isn’t familiar – or eaten – is that fresh corn is considered animal feed. Which still doesn’t explain how something isn’t fit for human consumption if it’s raw, but if it’s cooked and canned, that’s another story. And when it’s in that sloshy, soggy state, it’s often found in unfamiliar places – like scattered on pizza or piled up in a salade niçoise.

(Which gives people in Nice fits, because it’s pas respectueuse – you’re only supposed to use raw vegetables in a salade niçoise.) 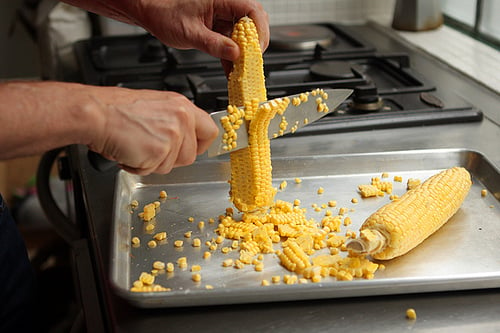 On the other hand, we Americans can’t get enough fresh corn and come August, most of us living in France who’ve been perfectly content to consume wonderful cheese, bread, and wine for the past eleven months, well, suddenly our seasonal clocks collectively kick in and we develop insatiable cravings for plump, fresh tomatoes and corn on the cob slathered with butter and salt.

So how excited was I when a friend took me to Grand Frais, a giant supermarket near where she lives, which specializes in produce, and I was faced with mounds of fresh corn for just €1,50 ($2) for three ears? And if you bought three, they threw in the fourth one for free. Of course, I couldn’t resist (the corn, and the bargain), and proudly exited the store with a big sack containing a dozen ears of corn. 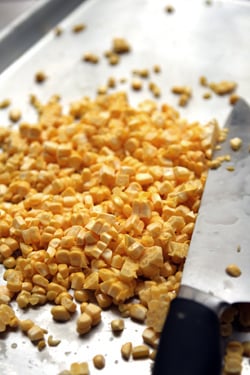 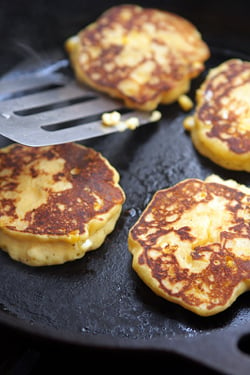 The funny thing was, when she saw my pile of corn, the cashier asked me what animal I was going to feed it to…and I don’t think she was expecting me to point to my friends when she mentioned the word “animals.” I tried to tell her how good fresh corn was, as I’m often wont to do around here (I guess I’m hopelessly Californian – always trying to raise awareness of neglected issues…) but stopped when she told me she didn’t like any vegetables, because she didn’t like the smells of them when they were cooking.

I’ll chalk that up to a curious paradox of someone lucky enough to work in a well-stocked produce store, but was thrilled for myself (and the two-legged animaux I had in tow), and couldn’t wait to smell the corn roasting on the wood-burning fire that we were cooking dinner over later that night. 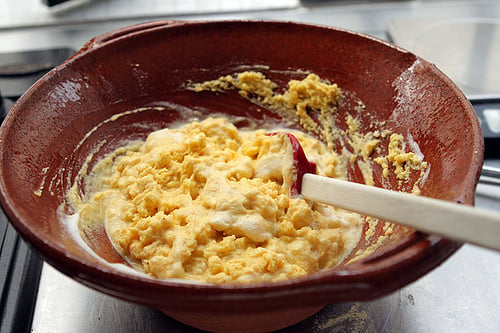 Although we ate our fill of corn, I must be rusty because I didn’t realize how much twelve ears of corn would yield. (In case you’re on a quiz show, each large ear will give you about 1 cup of kernels, or 150g.) So I needed to find a few other creative ways to use the rest of it. 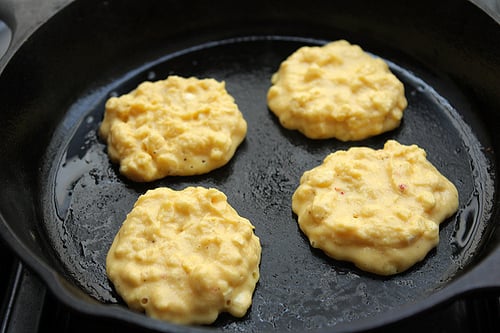 I turned to my trusty volume of Chez Panisse Vegetables, a wonderful treatise on using all the great vegetables that show up during the four seasons in California, which I dip into frequently, for old time’s sake. In spite of making me a little wistful for all those gorgeous ears of Silver Queen corn and heirloom tomatoes that we used to get at the restaurant all summer, I get my taste of California here in Paris, and continued to spread the word of fresh corn at a dinner party/picnic that I was invited, hosted by a vegetarian friend, and these certainly fit the bill. 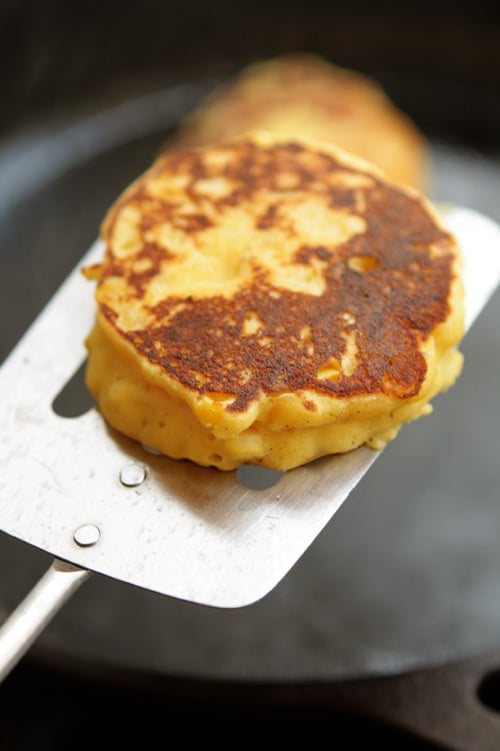 In addition to the corn, the other magic ingredient in these tasty corn cakes is corn flour, which is different from corn meal and corn starch; it’s similar in texture to wheat flour, but it is sunny yellow and makes the corn cakes even more corny. 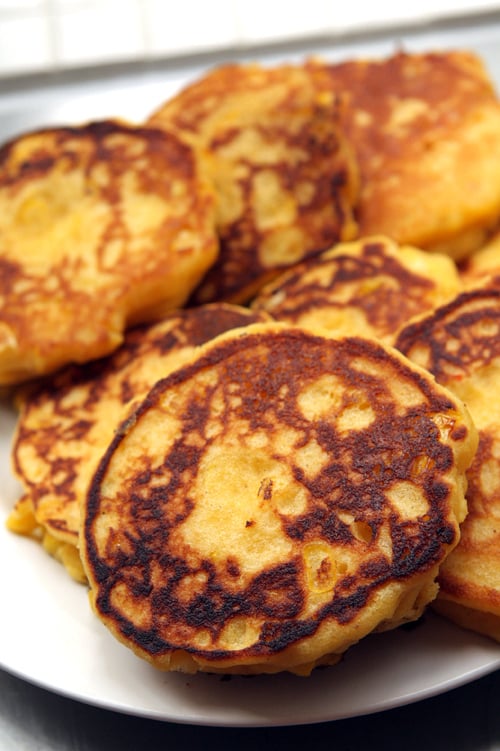 Adapted from Chez Panisse Vegetables by Alice Waters I added a chopped bird’s eye chile, which made them pretty spicy. So you can either omit the chile, use a different chile, or add a bit more chili powder than I called for. I had considered adding some fresh herbs, and had some chopped basil waiting in the wings. But when I tasted them, I didn’t want anything to detract from the wonderful fresh corn flavor. To fry them up, I used clarified butter which will smoke less. If you want to serve them warm, put a baking sheet in a low oven, about 325ºF (160ºC) and put them in there as you remove them from the pan until ready to serve. Aside from the four I ate right out of the pan, the others were enjoyed at room temperature at the outdoor picnic dinner I went to. Aside from just a little salted butter swiped and melted over them just after they’re fried, these corn cakes would be great with some roasted tomato salsa heaped on top, alongside a pile of garlicky sautéed greens, or crowned with a dollop of sour cream and salmon eggs with chives. They also would make a nice side course with grilled fish, chicken, or meat.

Note: As mentioned, corn flour is not the same as cornmeal; it’s very finely ground corn. I found it at my local natural food store easily and you can get it online. Since the corn cakes use corn flour as a binder, they are gluten-free if you make sure the corn flour you are using is processed in a gluten-free facility. Note that in certain countries including the United Kingdom, corn flour refers to corn starch (called amidon, Maïzena, or fécule de maïs in French), which is highly refined and very starchy, and should not be used. According to this site, you can grind cornmeal in a blender to replicate corn flour. 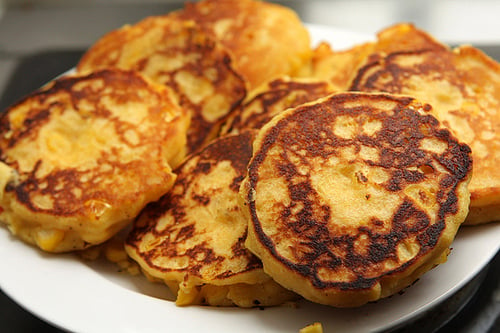