How Precise Do Recipes Need to Be? 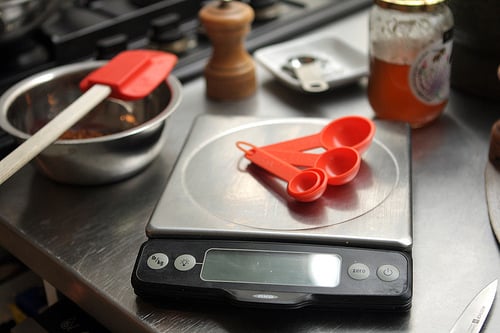 I’ve been doing a lot of work on recipes lately, and at the same time, thinking about the way recipe-writing has evolved, especially since the internet has taken a role in the process of cooking. At the same time, someone interviewed me about the difference between writing recipes for a cookbook versus a blog and I gave a somewhat long-winded answer (which I’m still editing before I send it back to them.) But the short answer is that when I started writing books, I had to envision who the readers would be. Julia Child wrote for Mastering the Art of French Cooking for Americans who had perhaps a little knowledge of French cooking but not a lot of access to the same ingredients. And she got it right.

When one writes a book proposal, the first thing a publisher wants to know is “Who is going to buy it?” So you sit down and think about the audience; The dedicated home baker? The weekend cook? The person who will tackle a forty-page recipe on making a loaf of bread? Someone with a tiny city kitchen? Then, when you write the book, you need to figure out what equipment people will – or won’t, have. Stand mixers, food processors, 12-quart Dutch ovens, 8-inch square cake pans, candy thermometers, bundt pans, and so forth, are all questions that pop up when working on recipes.

When I write a book, I assume a certain level or knowledge and/or commitment because people have made an effort to obtain the book. Writing for the internet is more interactive and I can write about subjects that are diverse and the interaction makes me think about the possibilities of a recipe. And I can see questions that might arise or need clarification in real-time. So both are interesting to me.

As one of many recipe writers out there, we all want people to have good results. So I spend a good amount of time testing recipes over-and-over, using various ingredients and techniques, then refining and revisiting them over the course of working on the book (or blog post), until I’m satisfied that it works just like I want it to. Then, because of the long publication period for a book, I have time to step back from a recipe, then usually revisit it later again.

Yet the variables keep increasing. People used to just buy regular all-purpose flour, Hershey’s cocoa powder, and supermarket butter, which are all very standardized products. Now there are “European-style” butters in America with higher fat content and bean-to-bar chocolates with more acidity than “baking” bars that used to be what everyone bought at the grocery store. And home appliances have changed; one of my ovens has eight different settings (!), some depending on which direction you want to heat to go, and the other oven has so many functions that I can only commit to learning one a month.

And speaking of ovens, restaurant-style ovens are now more common in home kitchens, which change the game as well, especially with the high-heat burners which cook things much more quickly (ie: one minute over high heat on a restaurant range is a lot different from one minute on an inexpensive electric stove.)

So I’ve been thinking about all of this, where some people are irked by phrases like “season with salt, to taste”, when in fact, taste is subjective and 1 teaspoon of salt may be just right for me, but too much for someone else. Or someone may only have table salt on hand (which is bitter-salty) or decide to use that in spite of what the recipe says, leading to bad results. So does one call for a specific type of salt? And what to do if, say, kosher salt isn’t available in Australia, where a number of readers may be. Or fleur de sel isn’t easily available (or affordable) where other readers may be?

(Personally, I only call for a specific brand or product if I feel that it really does make a noticeable difference in a recipe.)

I write recipes in grams and standard measurements for a variety of reasons, and because there are even sub-sets within those sets of measurements, I use what I call the “French standard” and list things in weights, and leave small quantities in teaspoons (cuillère à café) and tablespoons (cuillière à soupe), which are how metric recipes are expressed in France.

Even those between those two series of measurements, I get a number of questions about the weights of everything from an apple, to a cup of flour, depending on which method is used for measuring it. Which is a good argument in favor of adopting the metric system. (However when the battery on your scale dies on a Sunday, and you live in a country were a majority of the stores are closed on Sunday, those measuring cups sure do come in handy.)

So I’ve been wondering: How exact do things need to be? And should they be? Cooking is an intuitive act and except for the pastry kitchen, I’ve rarely seen a restaurant cook peering into a cookbook while plating up food. Are instructions “season to taste” too vague for you, or are you comfortable tasting a dressing and adding a little more salt or a squirt of lemon juice – if necessary – for your taste?

What do readers expect from cookbooks? How precise should they be?