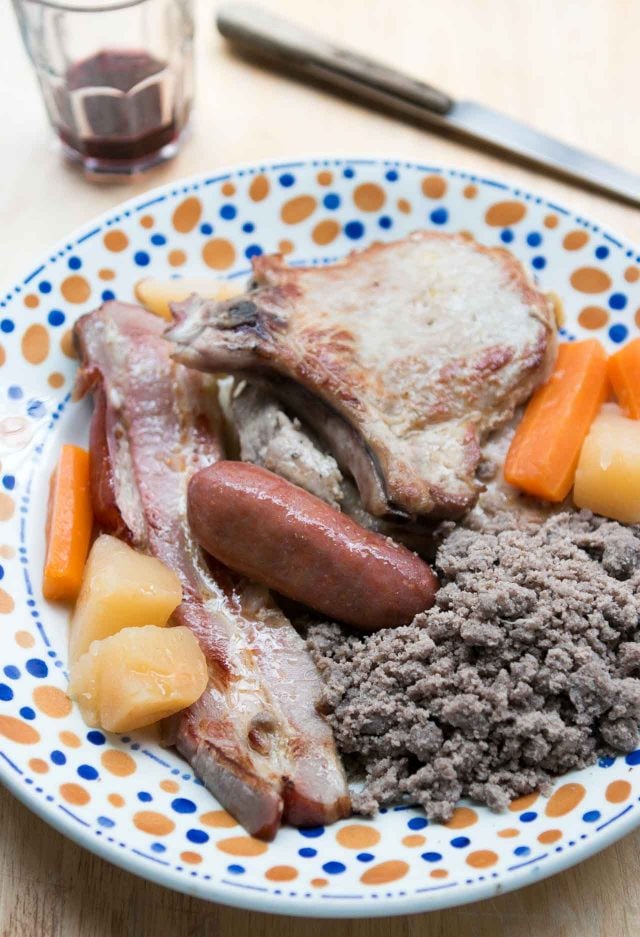 Kig Ha Farz is a homely, but absolutely delicious, Breton specialty that even few French people know about. It’s highly unlikely that you’ll ever find it served in a restaurant, even in Brittany, which I learned on a recent trip to the region. I told friends that we were staying with that I wanted to prepare it for them, and we spent a few days trying to find a farz sack to make it in. While shopping at the outdoor markets, we asked vendors that sold housewares if they carried them, but not one of them had any idea what Kig ha farz was, let alone carry a sack for making it.

One was even suspicious that we were from one of those “gotcha” tv shows, called enquêtes, in France, where they do undercover investigations. I saw one where they brought a hidden camera to an outdoor market where vendors were selling eggs from battery chicken farms marked as “cage-free.” (All eggs in France are stamped 0-to-3, which’ll tell you how the chickens were raised.) The eggs were sitting in pretty baskets on beds of hay, but when the journalist busted them for selling battery-farmed chicken eggs as cage-free, the vendor started throwing the eggs at them. (And even other customers started yelling at them, which I didn’t quite get, because they were being sold incorrectly marketed eggs.)

We weren’t there to bust anyone, or to have eggs tossed at us. I just wanted to make kig ha farz. 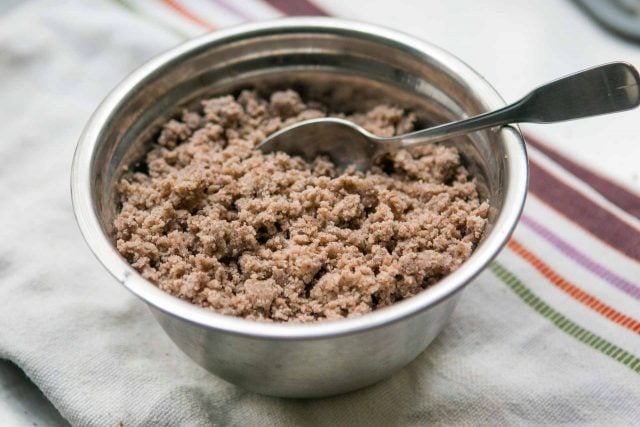 The first time I had kig ha farz was back in 2007, a few years after I started the blog. Romain had told me about it, but couldn’t really describe it. Or if he did, I wasn’t really getting what it was. It wasn’t until a trip to Brittany where we rented a house that I got my first taste of it. The couple we were renting our guest house from asked us what we wanted as a welcome dinner, and we said “Kig ha farz.” They were surprised, and they told us we were the first people to ever ask for it. But later that evening, her husband came out bearing our dinner. It’s been nearly a decade since I wrote about it, and after my recent trip, I decided to update the post. (And in case you go to Brittany and are looking to have it, you’ll have better chances of finding it if you are visiting the Finistère part of the region.) 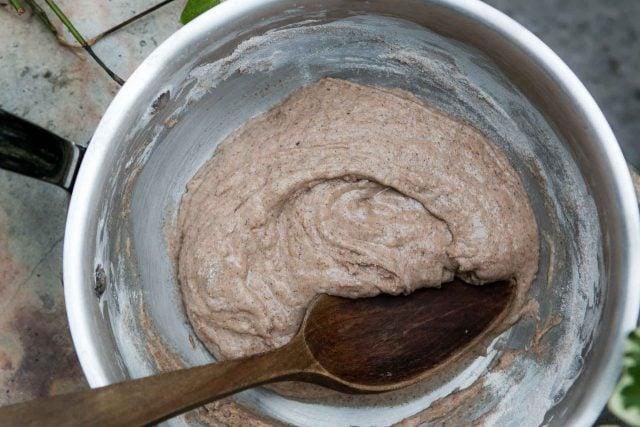 It’s said the tradition of simmering a dumpling-like mixture in simmering meat broth was done using the sleeve of an old men’s shirt. So if you have one lying around that you don’t mind ripping the sleeve off of, you might want to give it a try. Or you can use a big square of natural fabric that’s not too porous. As for me, I’m never letting my precious farz bag out of my sight again.

Kig ha farz is probably one of the most unusual things that’ll ever come out of your kitchen and it’s not winning any beauty contests, which is why I first wrote about it before the age of Pinterest and Instagram. But as long-time readers know, there are a number of recipes on this site that probably won’t make it to the top of the social media or search engine heap, but I found them interesting enough to share, like plum kernel ice cream or polenta gelato, made with a type of polenta that no one can get, and an oil that I think may have been in production for all of about six days in the south of France.

I’ve been accused of being someone that didn’t follow the herd, so apologies, but I think it’s fun to tackle a new cooking project, especially one as unusual as this one is, and it’s easy to make, no matter where you are. 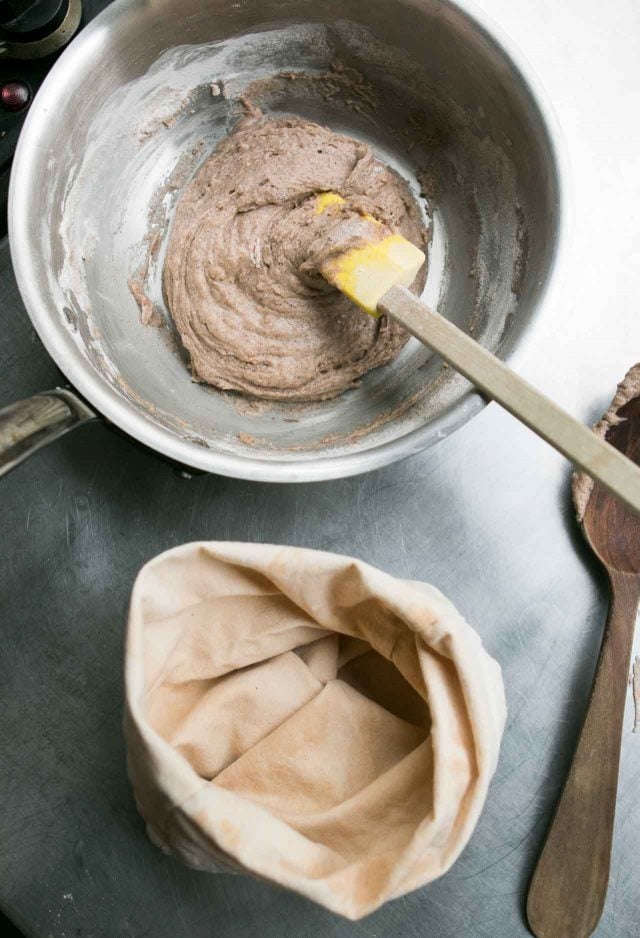 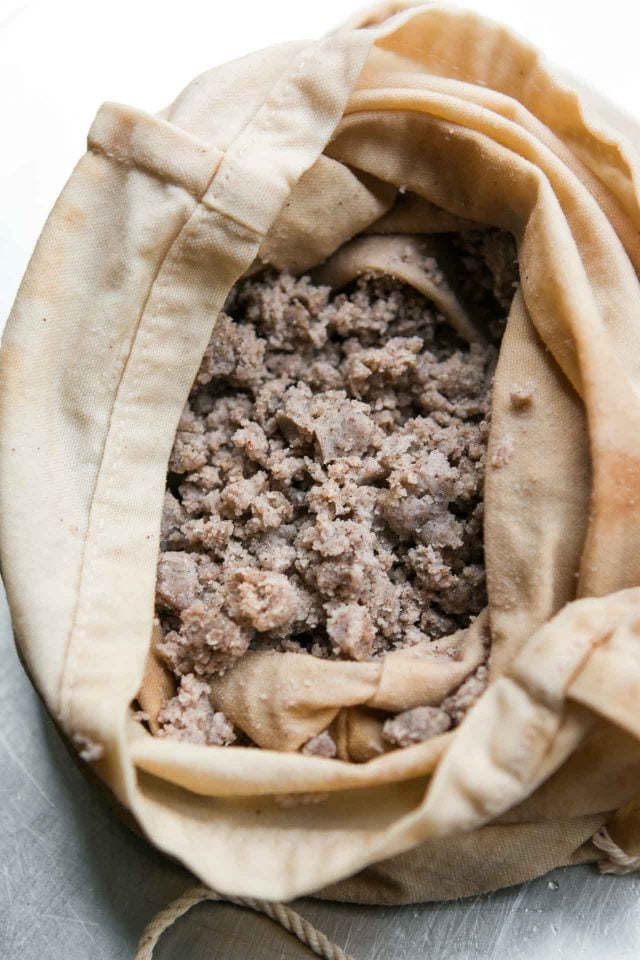 Buckwheat flour is what gives kig ha farz its hearty, earthy flavor. A reader in the U.S. recently wrote that when she made buckwheat crêpes (called galettes, in France) hers were almost black. I’d made them for years in the States and didn’t have that problem, but another reader helpfully chimed in that some buckwheat flours are whole-grain and quite dark, unlike French buckwheat flour, which they said was partially refined.

I looked at pictures of American buckwheat flour online and didn’t notice them to be much darker than the French stuff, but the helpful reader suggested the closest replica of French buckwheat flour can be found in Japanese stores, the buckwheat flour they sell for making soba, which is sometimes mixed with wheat flour. I’m going to lug my precious farz sack along with me next time I go to the states, and give it a try. (See? I told you I wasn’t letting it out of my sight.) Some recipes do use a mix of wheat and buckwheat flour, so you could go that route as well, especially if you want something lighter. 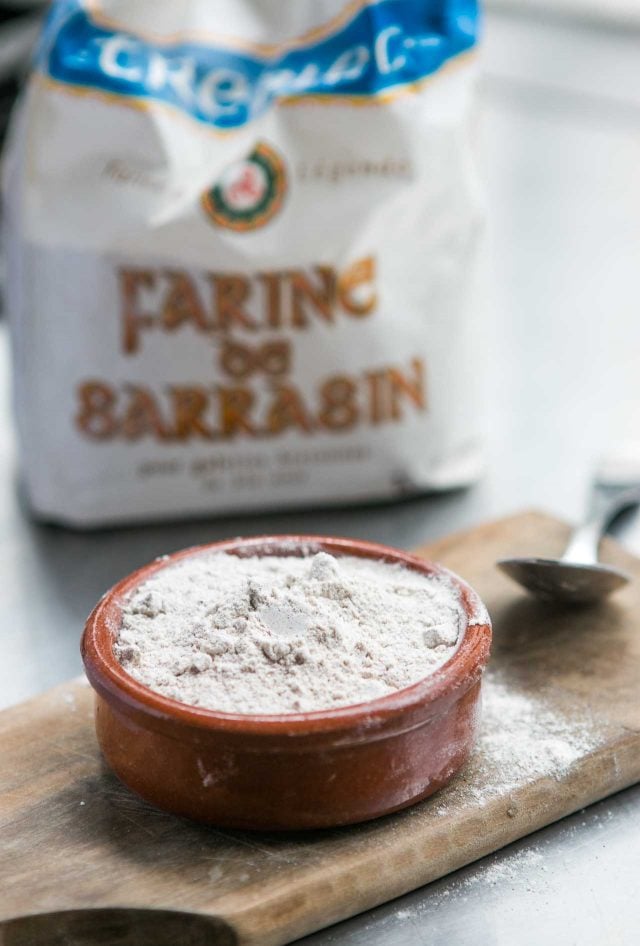 Traditionally, kig ha farz is served with a pot-au-feu, a French boiled dinner composed of long-simmered meats and vegetables. Various versions abound but all versions I’ve seen (and there aren’t that many!) involve pork belly or bacon, sausages, and vegetables. A few have beef, so you could use any recipe that you have in your repertoire to make this. Just remember that the kig ha farz needs to be cooked two hours, so it should be a recipe that meets that criterion, and has enough liquid to poach the dumpling.

Speaking of tradition, kig ha farz is sometimes served by the slice, rather than crumbled. I’ve also seen recipes with quite a bit of sugar in the batter, up to 3/4 cup (150g). I share the Breton love of sweets, namely Kouign amann and Sablés Bretons, but I’ll save my sweet tooth for dessert. 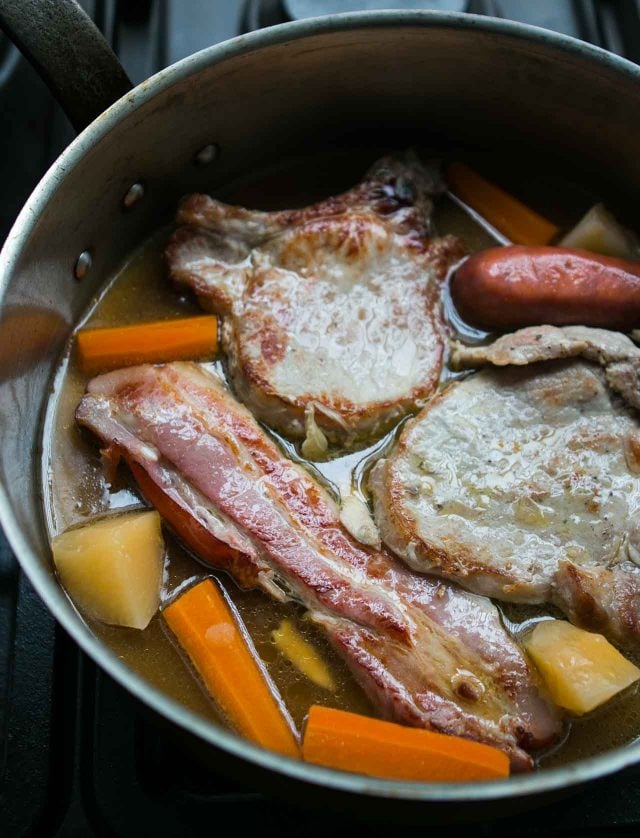 And I prefer Kig ha farz crumbled into little bits, which makes it easy to see why it’s referred to as “Breton couscous.” If you are a traditionalist (and let’s face it, some of us can only take that term so far before we reach for what’s handy, or what’s available where we live), you could served it with lipig; a sauce made of melted butter, shallots, and bone marrow, from the os à moelle that you could cook with the meats and vegetables.
Mine was a speedy version, which I made for two. While I simmered the farz, I pan-fried the slab of bacon and a couple of pork chops, then added lightly simmered carrots and turnips that I prepared separately to the pan along with a few generous ladles of the cooking liquid and some stubby smoked sausages, then simmered everything together until it smelled like dinner was ready. Each plate got served with a ladle of the sauce, In lieu of the lipig, you could dab the kig ha farz with some salted butter, which I didn’t do this time, but don’t see any reason why you shouldn’t. 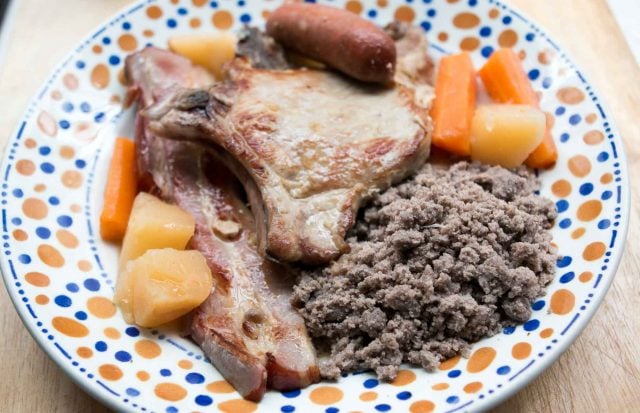 Adapted from The French Farmhouse Cookbook by Susan Loomis. Buckwheat flour is good for people avoiding wheat flour. If you don't eat meat, this can be served with simmered root vegetables, like turnips, carrots, potatoes, parsnips, hard squash, and even some cabbage. If doing so, I would add some herbs or other flavorings to the water, or cook them in vegetable stock. I've linked to some recipes below for making pot-au-feu, the classic meat-based French boiled dinner that kig ha farz is traditionally served with. And I've linked to some places where you can get Japanese soba flour (mixed with wheat), as well, which you may want to track down. To approximate the same thing, you could use 80% whole-grain buckwheat flour mixed with 20% wheat flour. I've also linked to some places after the recipe where you can get farz sacks in France, and elsewhere. You could also place the mixture in the center of a clean, damp piece of cotton cloth about 2-feet square (60 cm). Gather the corners of the cloth and secure them tightly with kitchen string, leaving room for the mixture to expand by one-third.
2 large eggs
1/2 cup (125ml) whole milk
4 tablespoons (60g) melted butter, salted or unsalted
1 3/4 cups (250g) buckwheat flour (see headnote)
1 tablespoon sugar
1 teaspoon coarse sea salt
1. Mix together the eggs, milk, and butter in a large bowl.
2. Gradually add the flour, sugar and salt, stirring until smooth.
3. Scrape the mixture into a farz bag, a sack made of unbleached muslin specifically for this purpose. Tie it closed, leaving room for it to expand by about one-third.
4. Simmer the farz in simmering broth, turning it a few times while cooking, for about 2 hours.
5. Drain the sack in the colander very well for 15 minutes. Then take the sack and roll it on the countertop, pressing it firmly back-and-forth, until you can feel the dumpling inside being broken into irregular bits. Continue rolling it on the counter until it's well-crumbled. If it resists being broken up by rolling the sack, open the sack and break the pieces of buckwheat up with your fingers.

Storage: The kig ha farz can be made up to two days in advance and refrigerated. It can be rewarmed in a microwave oven.

Where I discovered Kig ha farz in Brittany

Chez Michel and L’auberge du Roi Gradlon in Paris often feature Kig ha farz on their menus, although I’ve not had it at either place.

How to Make Pot-au-feu (Fine Cooking)