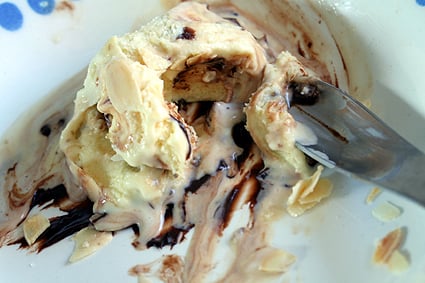 Last month, I received an invitation to visit the French Sénat. Like most of the government buildings here in Paris, this is one fabulous. Think wildly-ornate with lots of gilding and chandeliers and gardens that are plucked and shaved within an inch of their life. (‘Nature’ in Paris is meant to be looked at…ne touchez pas!) Plus there was a gorgeous dining room where les Sénateurs dine.

(Well, I should say, the real Sénateurs, since they didn’t seem to have my name on that list.)

I don’t know why the exhibition of foods and wines from the Lot-et-Garonne, was being held there, but I felt pretty special all the same. And who doesn’t like feeling special? 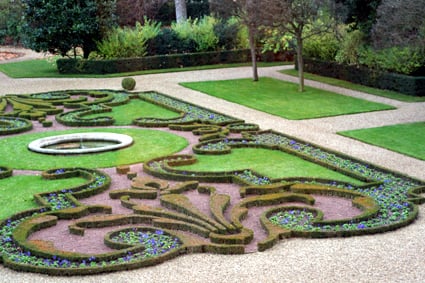 There was a decent selection of foods to try. Lots of foie gras, some nice Gascon cheeses, and of course, pruneaux d’Agen. And lots of ’em. Since they were free, I ate as many as I could, especially the ones stuffed with chocolate-flavored prune filling. I was in prune heaven!

Except the next day—I was in prune hell.
Like Armagnac (take it from me); it’s worth knowing your limits. 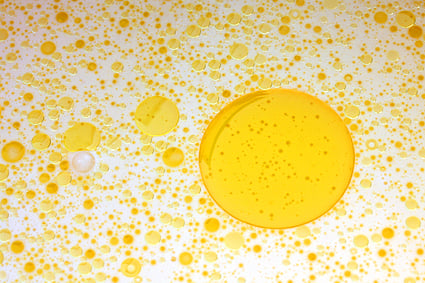 But one of the most interesting things was huile de noyau, huile d’amandons de pruneaux, or simply plum oil—to us American-types. Actually, it’s the oil pressed from plum kernels, which have a deep bitter almond scent that I love. It’s a flavor that goes amazingly well with fruits like plums, apricots and raspberries, but I was little curious as what to do with oil

“Hmmm”, I thought, as I unscrewed the cap and took a deep sniff of the golden oil, which had the strong aroma of bitter almonds. And my mind started churning. 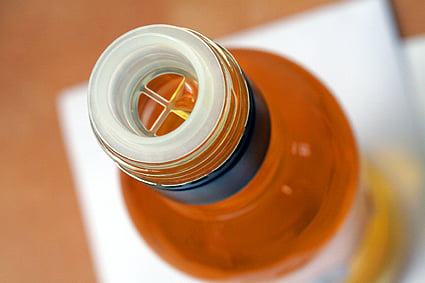 While the reps gave me some savory suggestions, being a sweet kinda guy, I had other ideas. I poured a teeny bit into a batch of granola that I was mixing it up, which gave it a lovely almond under-note And I added a tiny drizzle to a bowl of steamy pumpkin soup (although, I swear…that was my last bowl of soup I’m eating this winter.) Since it’s pure oil, it can be added to cake batter or pure melted chocolate as well and I’m thinking of making a ganache with it when I get my act together. Might be fun with marshmallows too? 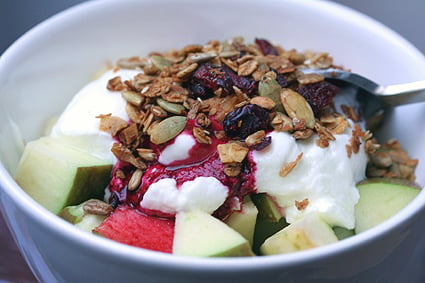 But it seems like most things around here eventually wind up in my ice cream maker. And this plum oil was no exception.

I’ve nicknamed this; The Ice Cream No One Will Ever Make, since it has a few esoteric ingredients. Although dried sour cherries are common in the states, in France, they’re practically impossible to get. A health food store near me sell them, and they cost 55€ ($80) per kilo, roughly $35 per pound.

That makes my Pistachio Gelato seem like a bargain!

Aside from the elusive plum oil, I marinated the cherries for a couple of days first in Metté eau-de-vie de cacao, a crystal-clear liquor distilled with cocoa beans. I discovered a bottle at Lavinia, the huge wine shop in Paris that has a gazillion other flavors of eau-de-vie (garlic or thyme anyone?), but of course I was so excited by the chocolate one.

However I started receiving bottles as gifts from friends who came for dinner who were just as excited as I was. The excitement wore off a bit as soon I had more bottles than I knew what to do with. Which you might not think is a problem, but how many bottles of eau-de-vie can you drink?

You may congratulate me; like a good Senator, I’ve finished off the last bottle—and I’m still standing. (And I’ve almost reached my deadline!)

And I thought the scent of cacao pods would pair well with the cherries and plum oil, especially since I served this for dessert on Christmas with warm chocolate sauce and either atop crispy meringues or in profiteroles, poofy cream puffs. I forgot which since it was almost a month ago.

And there was all that eau-de-vie, too. 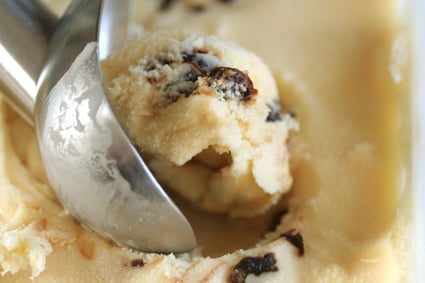 You can use a few drops of pure, top-quality almond extract in lieu of the plum oil. Add a few drops to taste, a little at a time. It’s a very strong flavor so proceed cautiously. Next time I make this, I’m going to use less of the sour cherries and fold in some salted candied almonds instead of scattering a few of them over each plate of dessert. Since spring is just around the corner (j’éspere…) I look forward to serving this ice cream, sans the sour cherries but alongside a plum tart, apricot and raspberry crisp, or with a ladle of warm cherry compote instead. The bitter almond flavor is pretty super with any stone fruit or berries. And, of course, chocolate.

*Soaking dried fruits in alcohol prevents them from freezing too hard. If you don’t drink, you can cook them in a sugar syrup (1 part sugar to 1 parts water) until the liquid’s evaporated, or just plump them in hot water or fruit juice and spoon a few over the top. Since they’re pretty intensely-flavored, don’t go overboard on them. Especially if they cost what they do around here.

I don’t know of a source for plum kernel oil online or in the US—or in other countries for that matter. But if anyone does, you’re welcome to leave it in the comments. I know some natural food stores carry it, but be sure it says it’s suitable for consumption if you’re worried about toxicity.

(Update: I was tipped off by a reader who found a company in the US which sells plum kernel oil.)

If you don’t have an ice cream machine, check out my post on Making Ice Cream Without A Machine.