Technically this gelato isn’t ‘polenta’ ice cream, but it’s made with corn flour. But when I was in Torino, Italy last year, a local gelateria was making what they were billing as a ‘polenta’ gelato, using farina bóna.

So if you want to argue with an Italian chef, you’re welcome to. After tangling with puzzling bureaucratic paperwork for a disproportionately-large chunk of my days lately, I’m happy to just accept what people say, and no longer question the how’s and why’s. (Like when I got a customs bill for an unsolicited delivery last week that had a tax on the tax. To preserve my sanity, I’ve stopped trying to make sense of those kinds of things anymore.)

Plus “Flour Ice Cream”, somehow doesn’t have the same appeal. 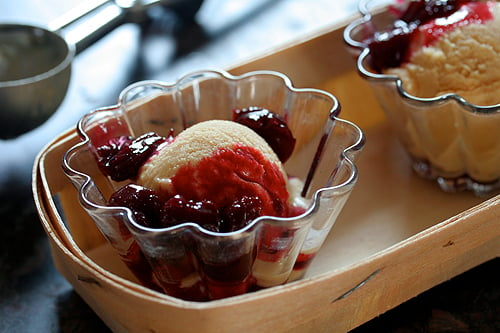 I was happy, at long last, to get around the making gelato from this unusual ingredient that I picked up during the Slow Food event I’d attended. Unlike the derision* that similar events like this draw elsewhere (which was why I always avoided going), Monsieur Skeptic went with an unusually-open mind and was thrilled to discover so many unusual and nearly-extinct food products that the Slow Food Foundation is working to keep alive. 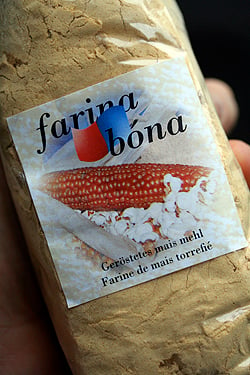 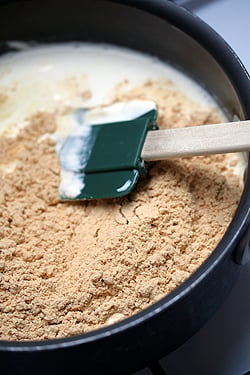 Farina bóna is deeply-roasted corn, ground into flour, which was produced in villages, such as Vergeletto, in Switzerland, which had just 90 inhabitants.

No one quite knows the origin of this roasted corn flour, but it fell out of favor after World War II, most likely when more convenient foods became available. And in 1960, the mill stopped producing the flour. About thirty years later, the mill was restored by a museum and the production of this toasted corn flour started up again, and they’re trying to revitalize their economy by re-introducing farina bóna.

I was surprised when I opened the little bag how potent the smell was: imagine popcorn, all ground up, but with the deep, smoky flavor of roasted corn. I could imagine many possibilities, but the one that was calling my name was, of course, ice cream. 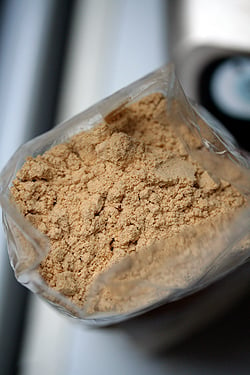 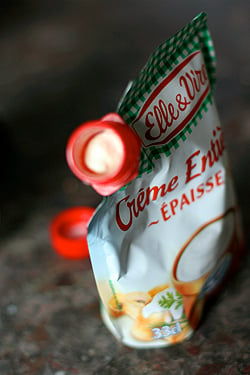 I decided to make this as a more traditional gelato, which usually means without eggs. And it was amazing, and really captured the flavor of the grilled corn. But I worried that presenting a recipe that few of you could make would be problematic (to say the least…), so I went to my health food store and tried toasting off some corn flour myself. It approximated the same flavor, although because the ears of corn weren’t toasted, just the flour—and the corn was surely a different variety, the flavor wasn’t quite the same. 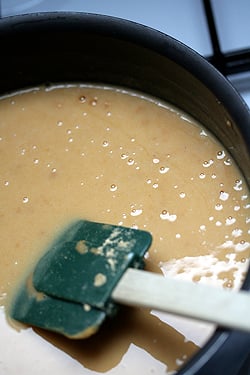 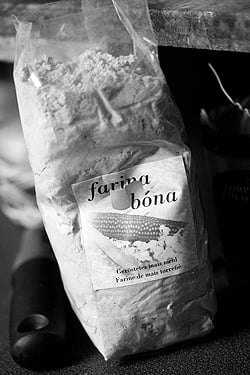 I searched online but couldn’t find any global sources for farina bóna. However I did find something called pinole de maiz, which they call “toasted corn flour”, which may be similar to masa de harina, although I’m not sure. If any readers know, I’d be interested in hearing about it. But from the looks of them, they would need to be toasted further to approximate farina bóna. 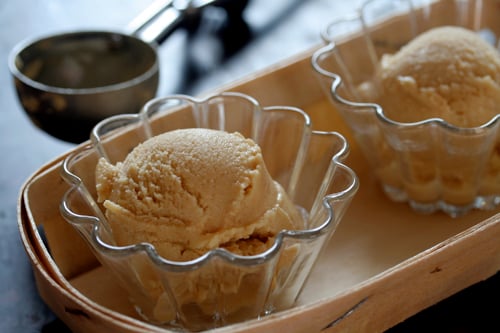 Perhaps we all need to take a field trip to Switzerland since my stash needs refreshing after I made a few batches of this, one right after the other. Fondue anyone?

This is a very rustic-tasting ice cream; don’t expect it to be as smooth and creamy as other ice creams. I loved it, but honestly, it may not be to everyone’s taste. The distinctive earthy flavor was a good match for some quick-candied cherries I had on hand. When fresh apricots come into season, I’m thinking of roasting some with brown sugar and Marsala to serve alongside. Poached pears or dried apricots would be welcome alongside a scoop of this, too.

*Some of the derision of Slow Food events has to do with the cost. The events in Italy are quite inexpensive, but that means there are mobs of people. (The one I went to had 180,000 visitors) The sheer hoards of visitors makes it hard to taste and explore what is being presented. And difficult for the vendors, who are doing more crowd control than explaining the specialness of their products.

The difficulty, as always, is how to make these events affordable but still allowing people to get paid fairly for their hard work. My advice is to charge more, but include tasting ‘tickets’ so that people could redeem those for tastes, ensuring that the exhibitors get compensated for offering samples and guests have an easier time getting to taste the various offerings.