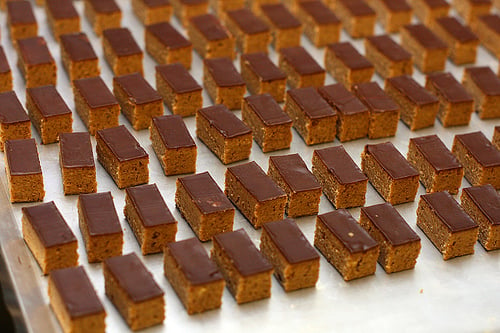 I don’t think there’s anyone happier than I am now that we now have our very own bean-to-bar chocolate maker in Paris. I remember when the movement started in America, and small chocolate manufacturers started popping up in the most unlikeliest of places by people curious about roasting and sourcing their own beans, then grinding them into smooth tablets of chocolate. I was impressed, but skeptical when it all started. But am thrilled the movement has taken off in so many ways and directions. 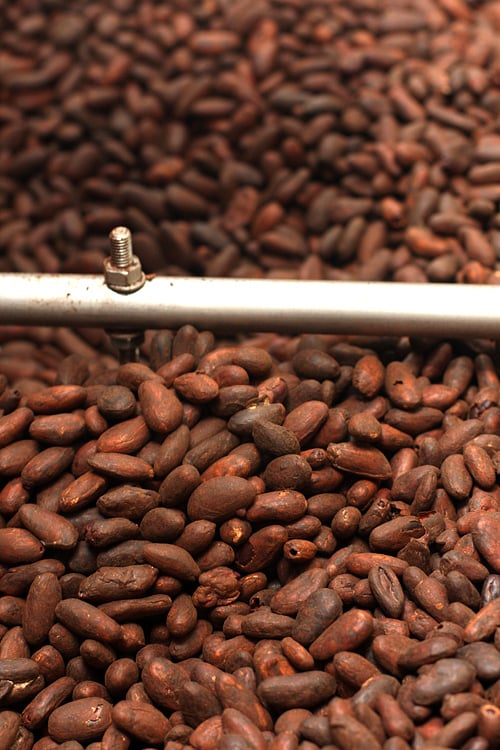 For the past five years, Alain Ducasse has been nurturing the same vision in Paris, along with pastry chef Nicolas Berger, who is now running La Manufacture de chocolat, their chocolate atelier not far from the center of the city. 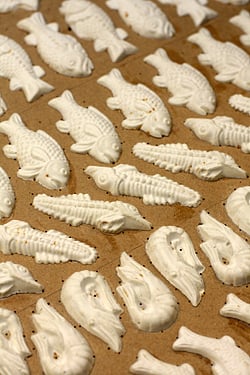 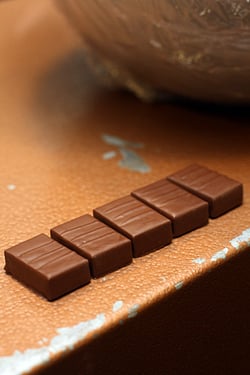 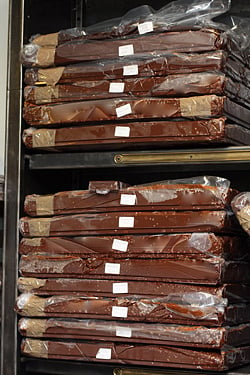 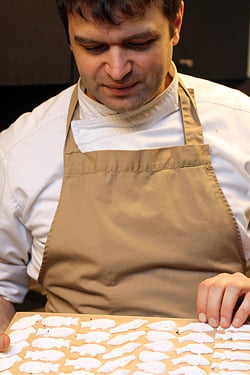 Interestingly, for a language that has a lot of specific words around gastronomy, there is no precise word for chocolate maker. There are chocolatiers (or fondeurs, people who melt chocolate to make filled chocolates) but when I met Nicolas, one of the first questions I asked him what his métier (craft) was called, in French. 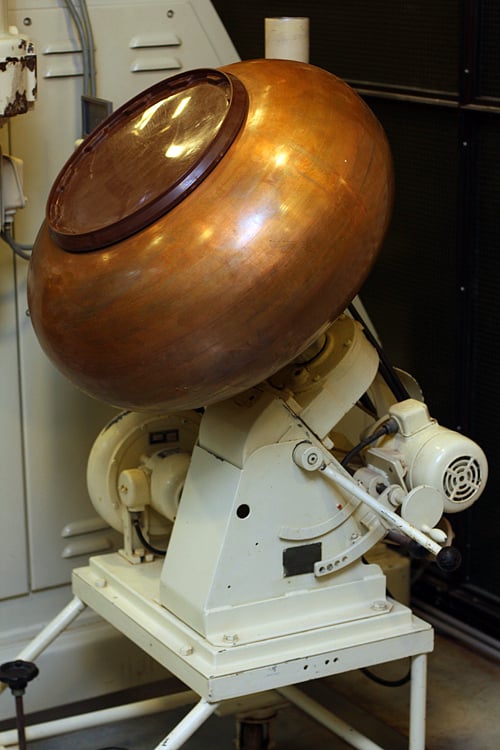 He paused for a moment, and said, “Maybe artisan?” Perhaps, but I think that’s a too all-encompassing word, since what he is doing is incredibly specific – and pretty wonderful, if you ask me. So either we need to go with that, or come up with something better. Perhaps torréfacteur (grinder)? Or monsieur des nos rêves (man of our dreams)? 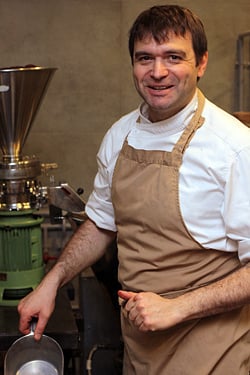 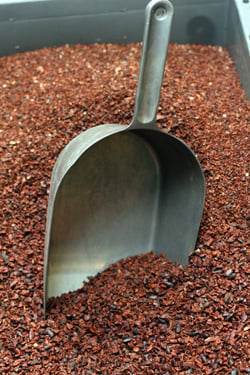 It’s an enormous undertaking in a tight city with certain restrictions on space and usage, and the team needed to find a place big enough for all the heavy equipment, like roasters and winnowers (the machine that blows the papery skins off the roasted beans), as well as somewhere that had adequate ventilation for the roasters because, believe it or not, not everyone wants to live with the smell of roasting chocolate! Plus the space needed to allow for a truck to drive up the front door, for unloading the hefty burlap sacks of cocoa beans coming from all over the world. 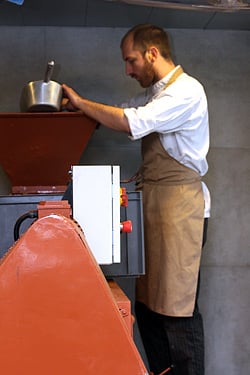 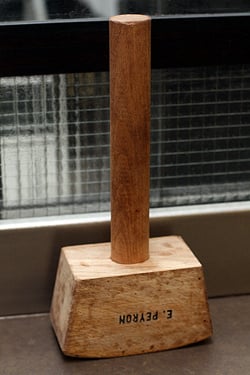 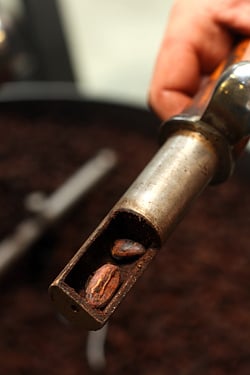 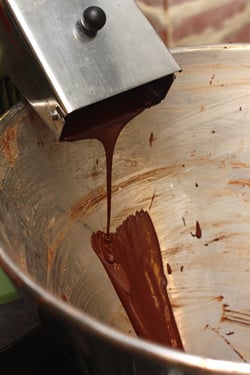 It’s very hard to make chocolate on a small-scale and, like I said, I was skeptical when friends launched the first of those businesses way-back-when in America, which has become very successful. (So if you ever want business advice, I’m probably not the one to ask.) The big companies can buy most of their equipment right from a manufacturer’s catalog. But here at Le manufacture de chocolat, they roast and grind beans in 150 to 200kg (330 to 440 pounds) batches at a time in their small machine, most of them modified as they go along, to make them do what they do properly for such small batches of chocolate. 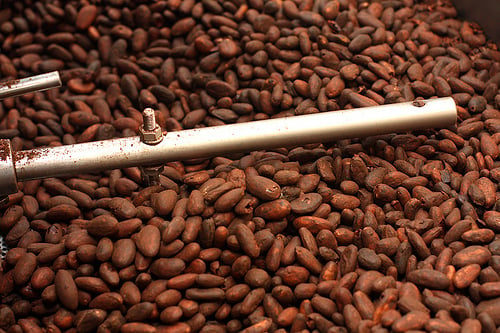 Nicolas starts by using a coffee roaster to roast the cacao, which stirs the beans for about thirty minutes. However the motor on their particular machine needed to be recalibrated to move slower that it moved for coffee because the cocoa beans were getting crushed. Nicolas explained that coffee beans are round so they roll around easily, but oval beans tend to move slower and in less-predictable patterns. It’s all a learning process at the beginning, and since beans change depending on where they’re grown and how they’re fermented, it’s the chocolate-makers challenge to get each batch just right. 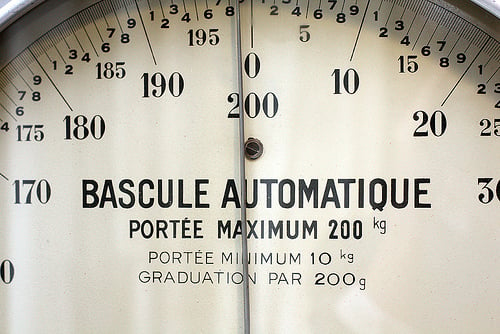 Nicolas has a lot more courage than me and confessed a love for the BHV department store basement, which is a giant, rambling maze of a hardware store. (We had a laugh about how if you head toward an employee to ask a question, they will instinctively move away from you.) But because of the nature of his job, which at present involves tinkering with machinery as well as pouring out slabs of chocolate, he’s there every day and picked up this wooden hammer. I initially asked him if it was to control the stagiaires (interns) and he laughed at that. He seems like a genuinely nice guy, but speaking from personal experience, when I was a temperamental pastry chef, I should have kept a mallet like that handy myself… 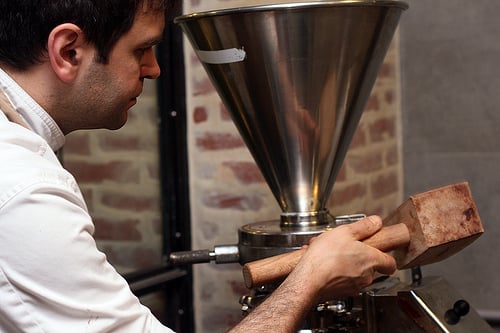 People often get flipped out about cooking from recipes. Baking times can vary, ingredients differ, and results aren’t always the same because each carrot, piece of fish, knob of ginger, or strain of wheat milled for flour, might be different. And that’s the same with chocolate, so the staff is spending a lot of time figuring out how these various cocoa beans react when roasted, crushed, winnowed, and conched. 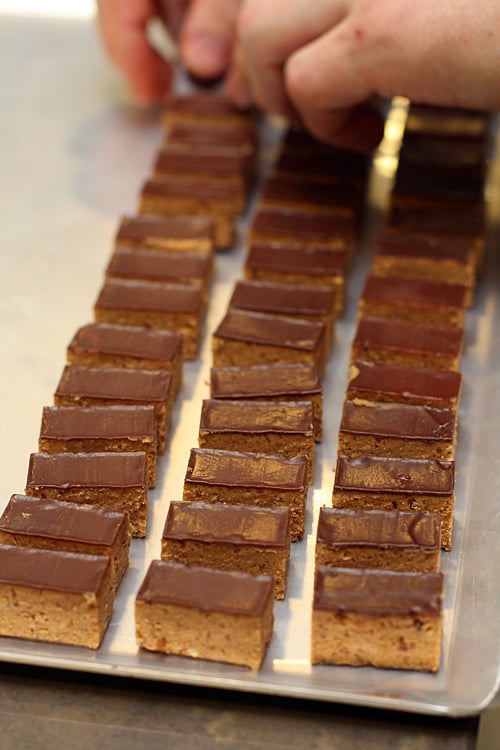 Years ago I did a demonstration on tempering chocolate in California and was using a new chocolate which refused to temper (in front of 200+ people – where was my mallet?) When I called the scientist at the company the next day, she said – “You know, these chocolates are all new. We’re still learning how they’re going to react.” 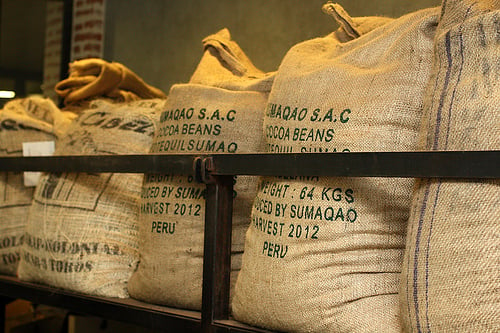 But like cities, people, baguettes, bloggers, and so forth, I like flaws in things. Anything too-perfect, to me, is suspect. I want to see that someone made something. I like the irregular crags in baguettes. I want to taste the character of the beans in each chocolate bar. I don’t expect each bar to be the same and like how things change and develop. So it was interesting to watch the small staff working on previews, and experimenting. Which, of course, required some tasting. 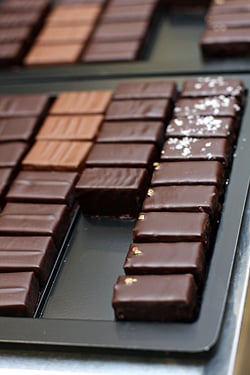 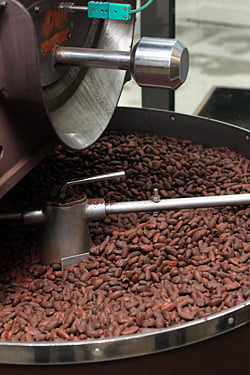 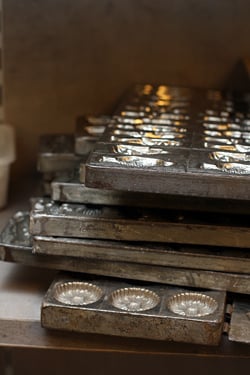 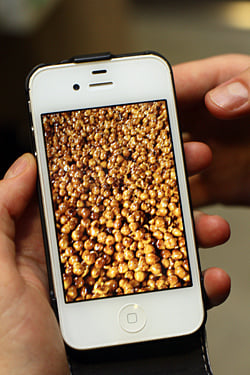 As the chocolates came out of the enrober, each was individually scanned and finished. They were trying out some of the chocolates that were destined to be part of their permanent line-up. And as an aside, since someone accused me recently of taking pictures of other pictures and posting them online, I thought I’d come clean and show you a picture of the caramelized hazelnuts that they were using for their praline bars. (However I will confess to taking all the other pictures myself.) 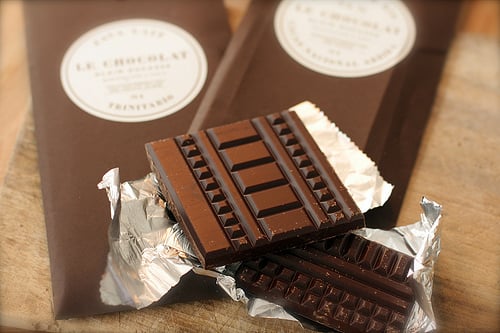 A few tablets of single-origin chocolate had been produced and I tried bars from Peru and Ecuador, as well as a dark milk chocolate made with beans from Java, which had a pleasant milky taste with none of the smoky overtones that chocolate from Java often has. The chocolate from Ecuador, which was organic, had a dry snap to it (because it’s high-percentage chocolate, with 75% cacao content) with an intense flavor that was a tad sauvage, and direct.

The Peruvian chocolate was a complete turn-around, with a wine-like flavor, a mild astringency, and incredibly boldness. In fact, it’d be interesting to taste these chocolates with French folks because, in my experience, most of the chocolates that are available tend to lean towards flavors that are more moderated and singular. And that’s about to change! 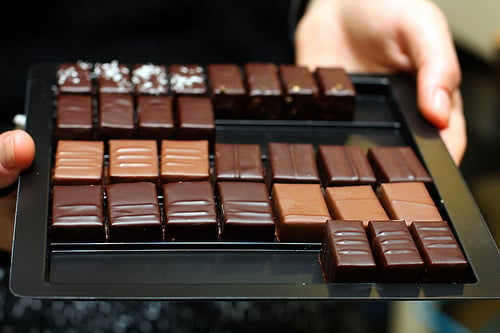 They were dipping a few of the chocolates, and before I left, I got to test a few of their dipped chocolates – right out of the machine – including bars of housemade praline enrobed in their own, housemade chocolate as coating. 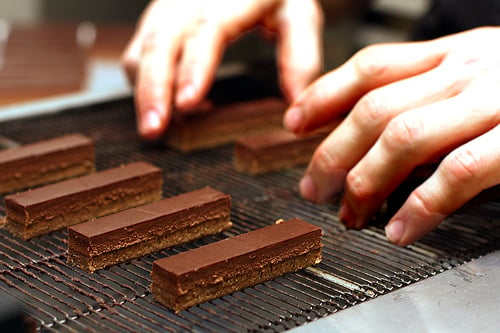 After I went plucked out a salted pistachio praline made with Sicilian pistachios. There are no artificial colors or additives, because the pistachios are ground up here (not purchased as a paste), so you can taste the pure, nutty flavor of pistachios, rather than a lot of sugar or other nut flavors that often get mixed in. It was incredible.

A coffee-flavored chocolate was made by grinding Ethiopian coffee and cocoa beans together into a dark slab (and I am certain bars of that will be available from the forty varieties of chocolate bars they plan to produce). And even though I’d had my morning coffee before my visit, it gave me a nice hit of caffeine to power me through the rest of the tasting. (And I didn’t want to leave any behind, especially with that wooden mallet looming in the background.) 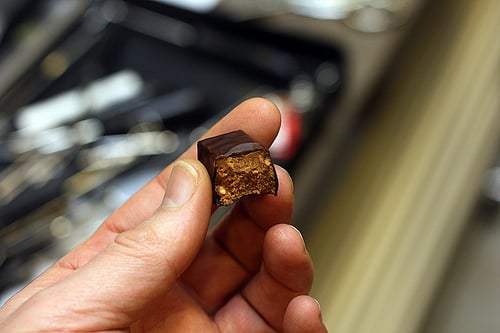 And hoo-boy, I loved the peanut praline, which was an audacious choice (Nicolas lived and worked in New York for a few years) and it’ll be interesting to see how it plays out amongst the French, who normally aren’t fond of peanut butter. (More for me?) But anyone who doesn’t swoon over the caramel mousse enrobed in chocolate is a knucklehead. Or as we say – Mon dieu!/Oh my God! 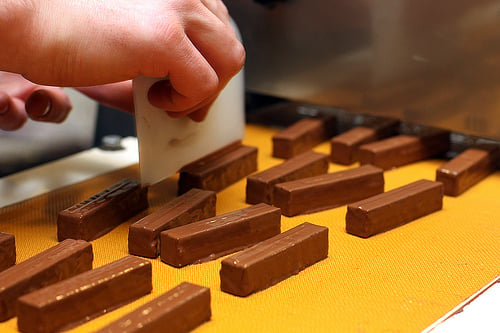 They plan to produce a variety of chocolates and bonbons seasoned with spicy piment d’Espelette (Basque dried red pepper), pine nuts, prunes marinated in Armagnac, passion fruit-coconut, and lime. Slabs of baking chocolate will also be sold by the kilo. Future interns will be happy to know that Nicolas found a use for that wooden mallet…and I didn’t require any motivation to finish off all the chocolates that I had to taste. And I’m looking forward to going back and trying more.

26 rue Saint-Bênoit in the 6th (M: St. Germain des Pres)
and
9, rue du Marché-Saint-Honoré in the 1st *(M: Tuileries)
and
Kiosks at the Galleries Lafayette, as well as at the Gare de Nord and Gare de Lyon train stations 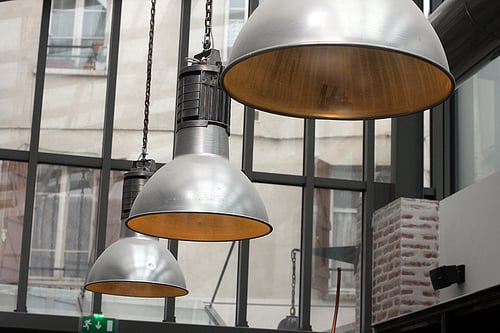