The Trees of Provence Will Sleep a Little Easier Tonight

There’s a lot to be said for the street foods of Provence. I’m happy to snack away on scourtines, wedges of pissaladière, and socca…except when I make a beeline from the airport to my favorite socca shop in Nice only to find FERMETURE EXCEPTIONELLE in a note on the door.

It’s a fairly common occurrence in this part of the country, where life is far more laid-back than in Paris, and an afternoon lunch can turn into a game of boules, then a few more glasses of pastis or rosé, and by the time you know it, it’s time for la sieste.

And then—voilà, it’s time for dinner. And you wonder…where did the day go? 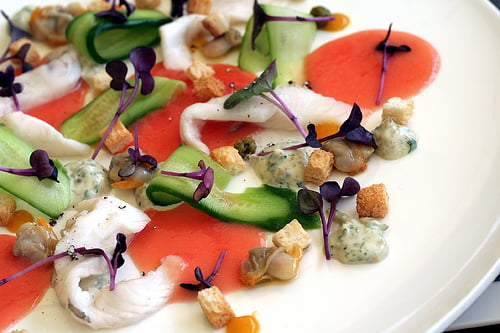 But when it’s warm, I agree that a long, lazy lunch is much more interesting than working. And that’s how we ended up at Les Bacchanales in Vence.

Perched on a balcony overlooking Matisse’s modernist chapel, with a bottle of rosé buried up to its neck in a bucket of ice, our salad of St. Pierre* with brined capers, scattered herb leaves, croûtons, cockles, pastel pools of tomato coulis, and tangy dollops of housemade tartar sauce made easy grazing around the plate. 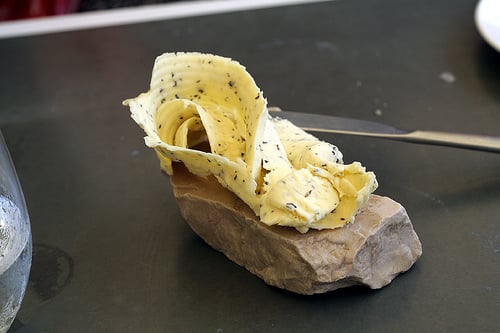 Americans are often surprised that the French don’t usually serve butter with bread. And they also wonder why the French are slimmer. (Hmmm, let’s see…) But the French are happy to indulge when the butter is extraordinary, and even though tomorrow is officially The First Day of Wearing a Swimsuit around here, the curl of salted butter with fresh sarriette (savory) wasn’t ignored. And at my age, since no one’s going to be evaluating my physique on the beach, what the heck. It was a done deal and I dove in. 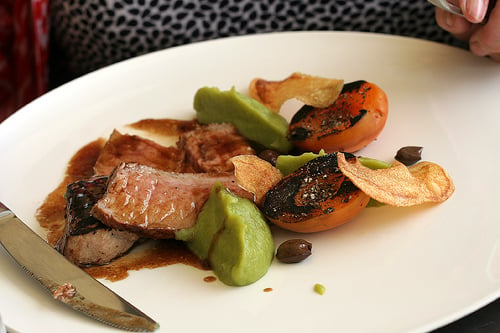 The milk-fed veal was lovely, but the liver had a particular flavor that I remembered fondly: the taste of being charcoal-broiled on a Weber bbq. And sure enough, when I excused myself to go to the petit coin, there it was out back. The plate was very nice, but even though they were blackened, the flesh of the apricots was rock-hard and flavorless. We knew that if we didn’t eat them, the kitchen would wonder why not. And that young and expertly-tanned staff, Provençal-style, were very nice, so although we tried to politely put away a few slices, they really weren’t edible at all, so we sheepishly left the rest on the plate.

Just after our dishes were cleared, the chef bounded out to our table and apologized profusely for the state of the apricots, saying that a stagiaire (intern) hadn’t prepared them properly. So anyone who thinks French chefs are uptight, they haven’t met Christophe Dufau. (Oh, and I don’t think schwing is translatable, but that’s fine because I don’t want to share.) 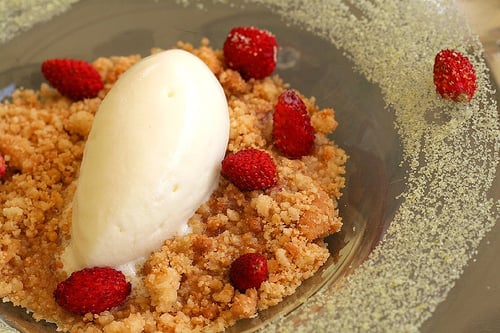 Dessert was a refined version of rhubarb crisp topped with a quenelle of house-made ice cream made of le Petit Suisse. Both were not heavy, but the scattering of teensy, intensely-flavored fraises des bois made me want just a big heaping bowl of them with a perfect scoop of that cool ice cream, and nothing else.

Still, we were happy and puttered off. Although if you go, and see a dent in the tree incongruously planted in the middle of the driveway, it was because were we weren’t quite floating away, but were earthbound by our Renault. And since we’re not driving, tonight we’ve got a few bottles of rosé chilling in the fridge and we’re making our own socca at home. And I think the trees of Provence can breath a little easier tonight, knowing they’re safely out of harm’s way.